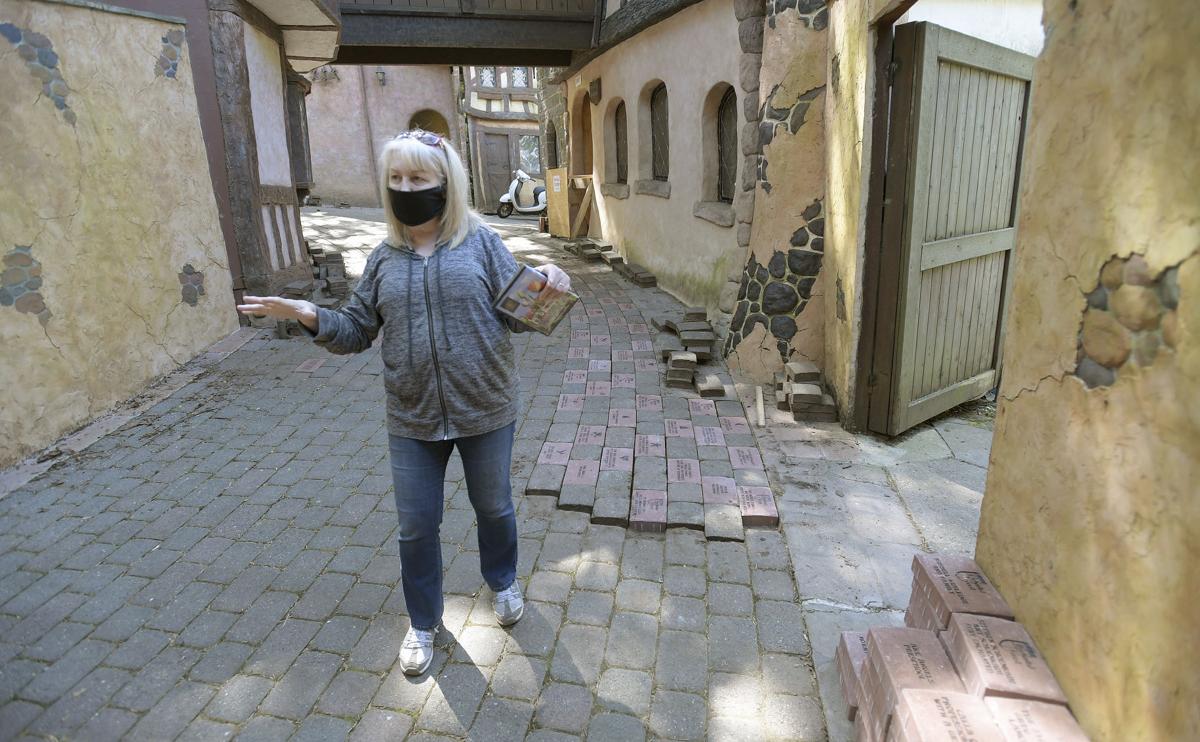 Enchanted Forest co-manager Susan Vaslev talks about the Buy a Brick program that gives the public the ability to place bricks with names an messages on pathways in the park including in the Old European Village. 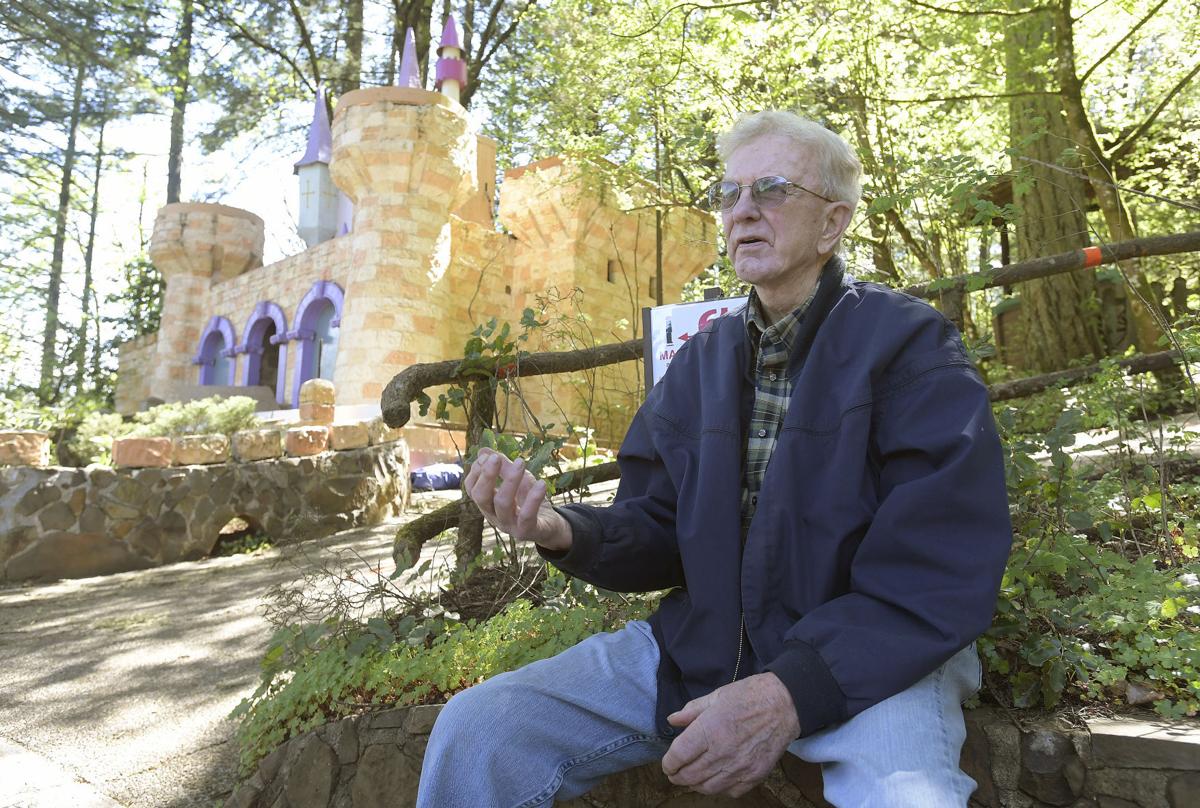 Enchanted Forest founder Roger Tofte, 91, talks about the park he created 50 years ago. 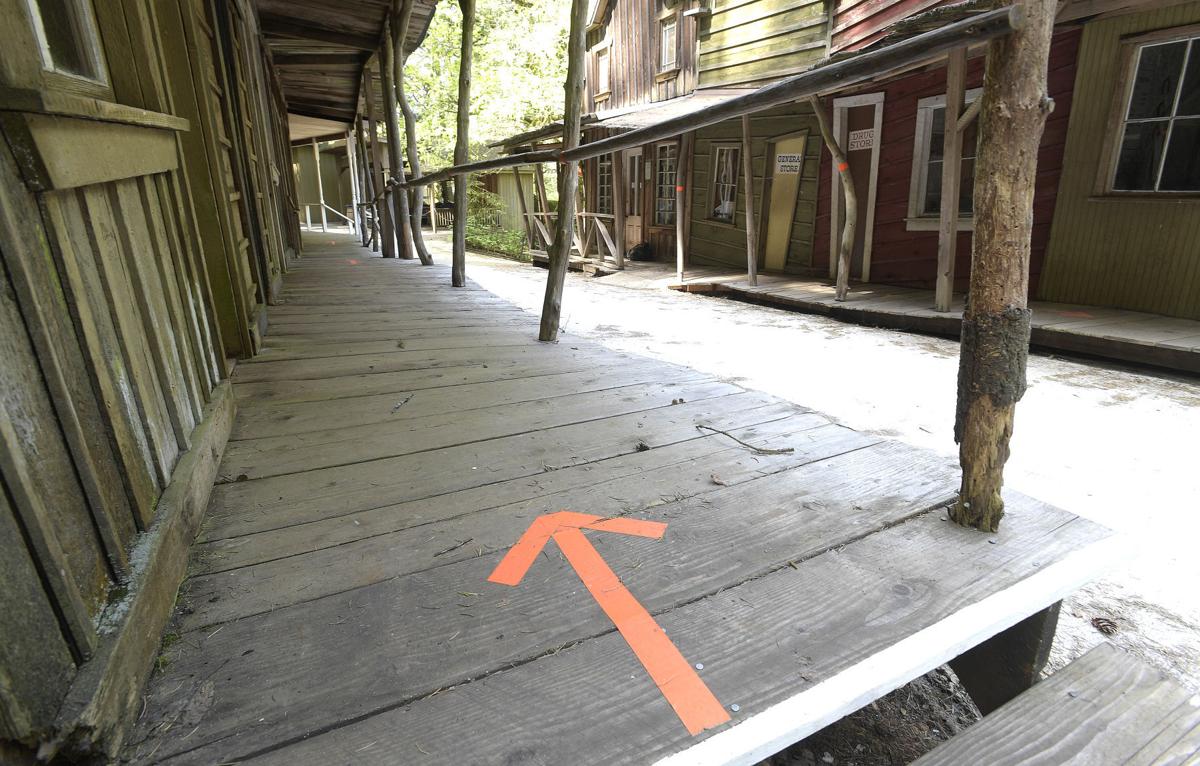 Enchanted Forest has set up path routes as COVID-19 controls at their amusement park. 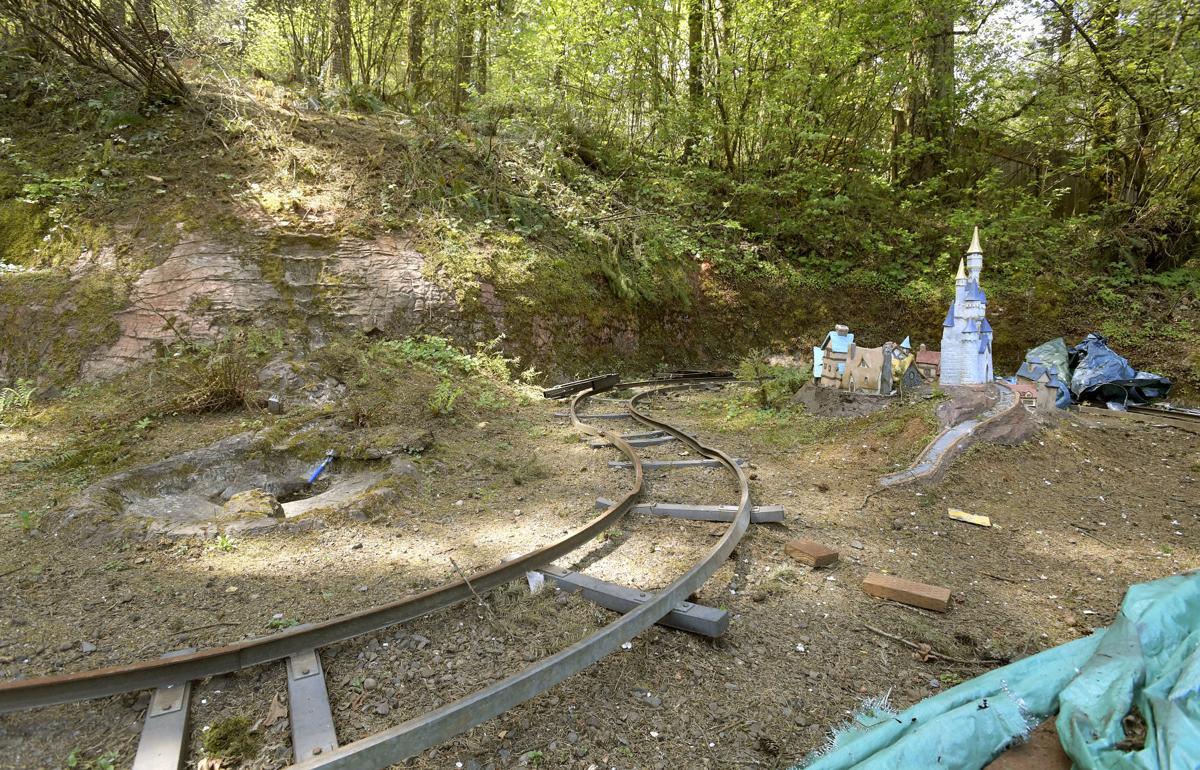 A large tree that crashed down the hillside destroyed the Tiny Tune Train. The train has been removed and a new one has been ordered.

TURNER — The father had lost his little boy at age 5. Thirteen years later, he was still searching for a place to preserve his son’s memory forever.

He found it, he told Susan Vaslev, in the bricks Enchanted Forest is offering for purchase to help the amusement park survive the COVID-19 shutdown and repair the damage from February’s ice storm.

“I’ve been looking for the right place to put his name ever since, and this is it,” he wrote.

For him, and for the thousands of others who have told Vaslev how much her family’s business has meant to them for five decades, Vaslev, the co-manager of the park, is committed to getting Enchanted Forest up and running again.

She had hoped that would be by May. That doesn’t look probable at this point. But she and her father, founder Roger Tofte; and her siblings — co-manager Mary Tofte, ride consultant Ken Tofte and Corvallis architect Lori Stephens — still see a reopening day out there somewhere.

They are committed, she said, because Enchanted Forest “is part of the family” — theirs and so many others.

“We’ve just got to keep plugging along and make the best of it, be optimistic and hope we come out OK,” Roger Tofte said.

In 1964, Tofte started working on his dream family amusement park on a hilly, 20-acre wooded parcel adjacent to Interstate 5 a few miles south of Salem. He opened Enchanted Forest to the public 50 years ago this August.

Tofte built much of Enchanted Forest himself, by hand, one bag of cement at a time. Now 91, he’s still doing much of the cement work — and he’s having to do a great deal more of it lately, no thanks to the mid-February winter storm.

The storm, the worst of its kind in 40 years, cut power to some 350,000 people throughout the Pacific Northwest and blanketed the park (now 37 acres) with ice.

Added her father: “It was so devastating, when we first came out here.”

Ironically, it was the very trees that Tofte worked so hard to save when he designed and built each attraction that became the park’s worst enemy. Yet he wouldn’t remove a one if he didn’t have to — and it’s part of the reason he’s never thought of selling. He wants the “forest” part of Enchanted Forest to remain just as it is.

“If a different outfit came in here, they might change it. It might lose what we’ve tried to accomplish,” he said.

Enchanted Forest had already been suffering because of government-required shutdowns to reduce exposure to COVID-19.

The fires that swept through Oregon in September didn’t touch the park, but did prompt another weekend closure and got close enough to prompt the family to take home work hard drives and irreplaceable artwork, just in case.

The worst tragedy was the loss of two family members — great-grandson 13-year-old Wyatt Tofte and his grandmother, Peggy Mosso — as they tried to escape the flames. Neither made it out.

With careful budgeting and a GoFundMe effort that began in October, the Tofte family had hoped to reopen Enchanted Forest by mid-March. The ice storm made that impossible. Repairs will set the family back by another $500,000 or more, by Vaslev’s estimate — and with COVID-19 cases continuing to rise, it’s not like any of that can be offset by ticket revenue.

“We didn’t fall into live entertainment as in Broadway or big concerts,” she said. “We also didn’t fall under museums, nonprofit or movie theaters. We can look at it again, but it did not appear there was anything for amusement park/theme park type of businesses. There was no category that we fell into.”

Scrambling for new ideas, the family decided to start a Buy a Brick program. For $250, sponsors can have up to four lines of text — three if they add a logo, such as a pawprint, wedding rings or an Enchanted Forest shield — and have it placed on a pathway in the park.

Right now, pavers are working on adding bricks to the pathway through the Old European Village. The next area will be between the log right and the Ice Mountain bobsleds.

The brick program will continue as long as there is space, Vaslev said. “We’d take out every brick we have, if we need to … for people to have their own tie to Enchanted Forest.”

Meanwhile, Tofte continues his own paving work, fixing the areas damaged in the ice storm. His most recent job has been shoring up the retaining wall in Storybook Lane near the Crooked House.

“A lot of patching, this and that,” he said.

He’s earned the right to a quiet retirement if he were to choose it, but Tofte said he has no such plans.

The Crooked House itself has been closed to visitors even when COVID restrictions lifted enough for partial occupancy. Too many patrons go through hanging onto the walls, Vaslev explained.

Likewise, Alice’s rabbit hole entrance to Wonderland and the slides inside the Witch’s Head and the Old Woman’s Shoe are closed, even when visitors are allowed. The spaces just aren’t big enough for full ventilation.

The attractions that are open are affected by mandatory 6-foot distancing. Certain rides, like the carousel and the bumper cars, can’t run at capacity. Stores and food venues are closed.

Vaslev would be all right with that if the park could just go back to full occupancy.

She stressed that she and the rest of the family understand and support everything Oregon officials have said needed to be done in the name of safety — but the limits have been particularly hard on the entertainment business, which can’t exactly switch to takeout.

“We are definitely in debt. The question is, how much further do we go in debt for this next season?” Vaslev said with a sigh. “Because we can’t operate to the point where we will make money.”

Enchanted Forest has a capacity of 3,000, and the park hits it on a good day, she went on. But on average, limited attendance has brought in about 200, not counting employees.

Brick sales, donations to the GoFundMe account and purchases from the park’s website gift shop have helped pay the bills while the family works to get the park back into shape for whatever season it might be able to scramble, Vaslev said. Some 8,000 people have made some kind of contribution.

“We want to thank everybody for supporting us,” she said. “It’s made a huge difference.”

She thinks about the notes she gets with the contributions: “My childhood memories are here.” “I want to make sure my grandchildren can experience this.”

“We’re a long way from being through this,” she said. “But we’re extremely creative. We’re very proactive. I feel we do an amazing job of creating extra revenue streams. But we just have to keep doing this.”

“It’s worth it,” she added. “Maybe not financially. It’s worth it in what’s been created; what joy it brings to people.”

For more information on Enchanted Forest’s history and how to donate, visit enchantedforest.com/fund-raising-efforts.

Kevin Hampton is the editor of The E.

The Philomath Museum is hosting an exhibition of artists from the Corvallis Art Guild through May 29 at the Moreland Gallery.

In our first segment, reporter Kyle Odegard gushes about the first sour beer ever from Calapooia Brewing Co. in Albany. Black Bog has blackberries and cranberries and it’s tart and fruity and absolutely tasty.

For our first video for Dirty Boots, we head to Chip Ross Natural Area on the north side of Corvallis. This park features a short and sweet hike.

The best tacos in the mid-valley

The next installment of Oregon State University’s American Strings series will feature musicians Andrew Bird and Jimbo Mathus at 5 p.m. on Wed…

Susan Vaslev of the Enchanted Forest talks about the amusement park's Buy a Brick Program.

Biden and Brown shift vaccine doses to where demand is high

Hoping to pick up the pace of vaccinations, state and federal health officials are ditching their population-based distribution game plans to …

It has been a while since I dipped into the lore of the Lewis & Clark expedition. I had a major fixation for about 10 years, starting abou…

A few years ago when I was writing a series of stories on the 150th anniversary of Oregon State University I had coffee with William G. Robbin…

After delaying its reopening two weeks ago due to online threats, the Enchanted Forest announced that it will reopen this weekend. Park manage…

Enchanted Forest co-manager Susan Vaslev talks about the Buy a Brick program that gives the public the ability to place bricks with names an messages on pathways in the park including in the Old European Village.

Enchanted Forest founder Roger Tofte, 91, talks about the park he created 50 years ago.

Enchanted Forest has set up path routes as COVID-19 controls at their amusement park.

A large tree that crashed down the hillside destroyed the Tiny Tune Train. The train has been removed and a new one has been ordered.