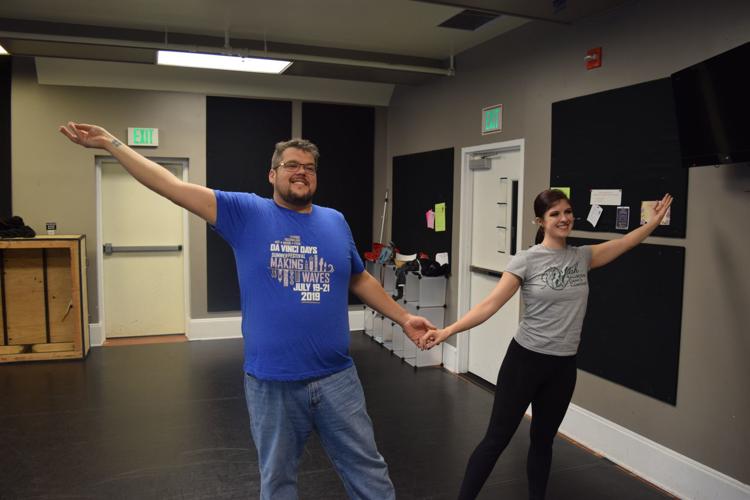 Chris Heuchert, left, representing da Vinci Days, poses at a recent practice with his professional dancing partner, Grace Johnson. Both will join other competitors on the floor at "Dancing with the Corvallis Stars," scheduled Saturday at the Majestic Theatre in Corvallis. 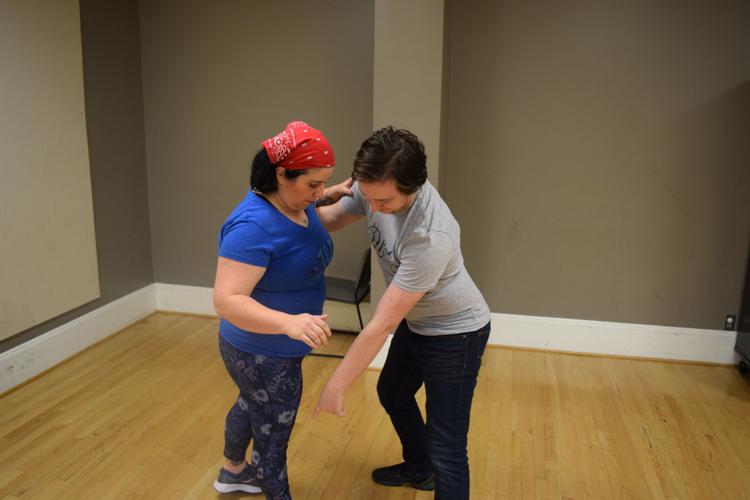 Pretty much the only thing the Majestic Theatre’s “Dancing with the Corvallis Stars” is missing from the ABC show that inspired it is Tom Bergeron as host.

According to Majestic Supervisor Jimbo Ivy, the idea for staging a local version of the dance competition came from hosting annual workshops from the Utah Ballroom Dance Company, whose professional dancers use the space as a practice facility for two weeks before starting its season of helping communities around the country stage similar fundraisers.

Ivy, who will compete in the event, said he and the company's Mark Lowres have previously discussed a local event, but they couldn’t make it happen until this year.

The inaugural “Dancing with the Corvallis Stars” is set for 7:30 p.m. Saturday at the Majestic. (See info box for details.) The event features representatives of six Corvallis nonprofits competing to out-dance — and out-fund-raise — each other.

The winner will be determined by a combination of audience votes and scoring by a panel of three judges. Participants receive bonus points if they meet or exceed the $2,500 fundraising goal each organization has agreed to (the organizations get to keep the money they raise).

“The pros do a good job teaching the dance,” he said. “They make it fun.”

Ivy said he will personally dance a cha-cha to AC/DC’s “You Shook Me All Night Long.” He didn't know much about his competitors' routines, but he’s heard other performances will include a foxtrot, a nightclub two-step, a country two-step, a swing and a tango.

Plans for "Dancing" began coming together over the fall, with partner organizations committing to providing competitors by late October. Ivy said it wasn’t hard to get other organizations on board because it’s a fun concept.

“It’s not even really a competition," he said. "There’s a big trophy at the end, but everyone has fun and everyone makes money."

According to Ivy, the event's first half features the competitors’ performances, followed by an intermission where people vote for their favorites. The second half includes demonstration performances by the professionals.

Ivy said the Majestic would like to host similar events once or twice a year moving forward: “I think it’s going to become a Corvallis tradition and I’m really excited about that.”

'DANCING WITH THE CORVALLIS STARS'

Buzz Aldrin gets married at 93, Kylie Jenner reveals the name of her baby boy, and more celeb news

Buzz Aldrin tied the knot for the fourth time on his 93rd birthday. Get that and more celeb news here.

'Everything Everywhere' tops Oscar nominations with 11. See the list of nominees here.

The multiverse-skipping sci-fi indie hit "Everything Everywhere All at Once" led nominations to the 95th Academy Awards.

Around the Mid-Willamette Valley (Jan. 25)

Oscar nominations 2023: Here are the major snubs and surprises that have Hollywood talking

There are always a few big surprises and heartbreaks come Oscar nomination morning, but this year's batch seemed to have more than its fair share of shockers — good and bad.

Jeremy Renner was trying to save nephew from injury when he was crushed by snowplow, sheriff's report says

"When Renner attempted to stop or divert the Pistenbully to avoid injury to (his nephew), he was pulled under the vehicle by the track and run over," reads the reports.

The 30 highest-grossing actors under the age of 30

Most of these actors started their careers as children, working in theater, commercials, and television, before landing breakout roles in films and film franchises that would go on to be worldwide hits.

Panic! At the Disco is breaking up, Oscar nominations 2023, and more of today's trending news

Panic! At the Disco's frontman, Brendon Urie, announced on social media Tuesday that the group will go their separate ways after shows in Europe and the UK. Get that and more trending news here.

The producers of “Anne Rice’s Mayfair Witches” didn’t just hire a witchcraft consultant to help them understand nuances of the best-selling book.

From Aretha Franklin to Lenny Kravitz, take a tour through 25 of the most celebrated outfits worn over 50 years of the Grammys.

Eddie Murphy insists he never 'made fun' of Michael Jackson

Eddie Murphy insists he never 'made fun' of Michael Jackson

Chris Heuchert, left, representing da Vinci Days, poses at a recent practice with his professional dancing partner, Grace Johnson. Both will join other competitors on the floor at "Dancing with the Corvallis Stars," scheduled Saturday at the Majestic Theatre in Corvallis.