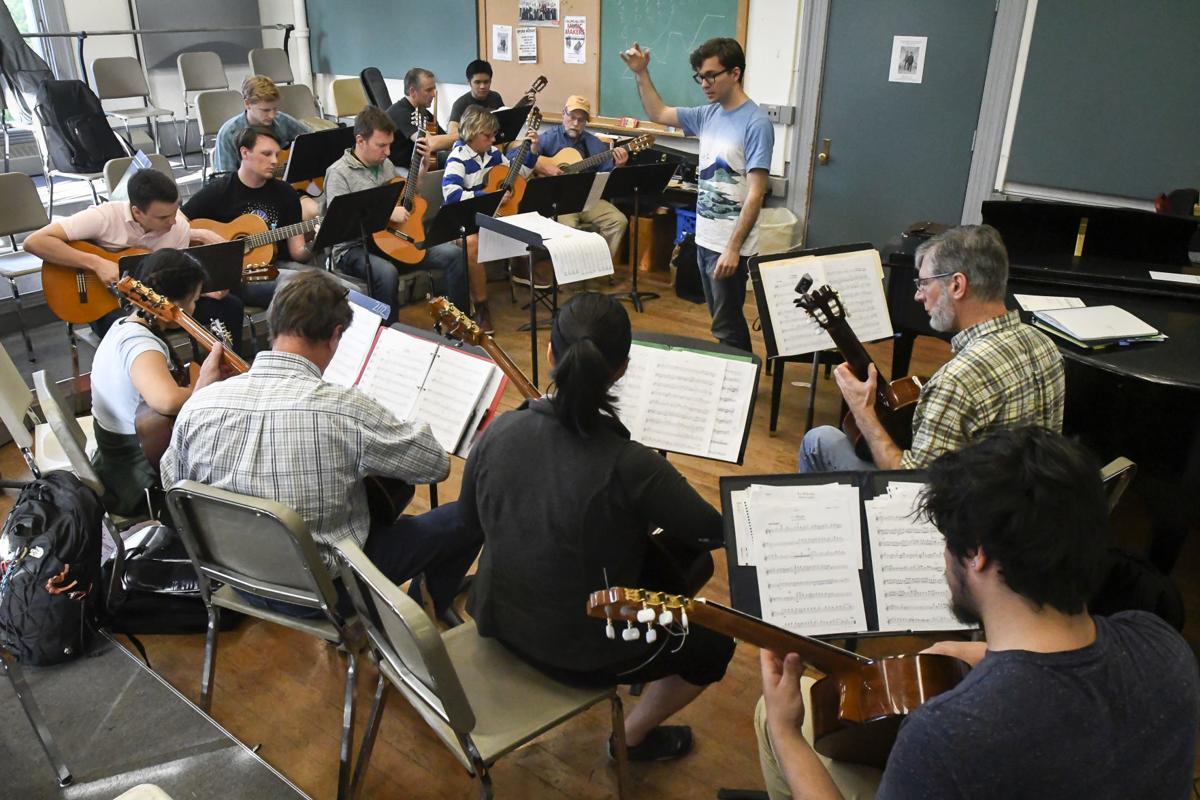 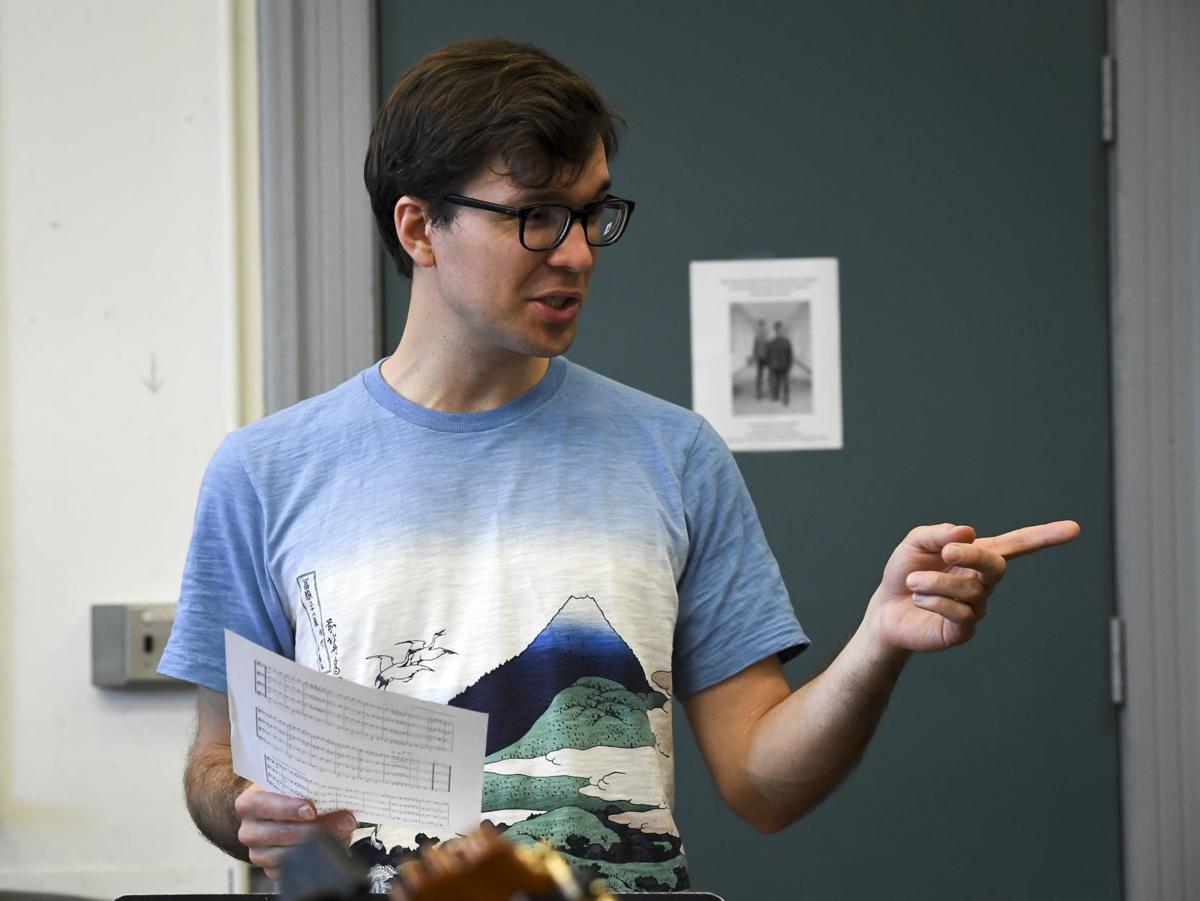 The players in the ensemble say O'Connor is able to work with guitarists of different experience and skill levels. 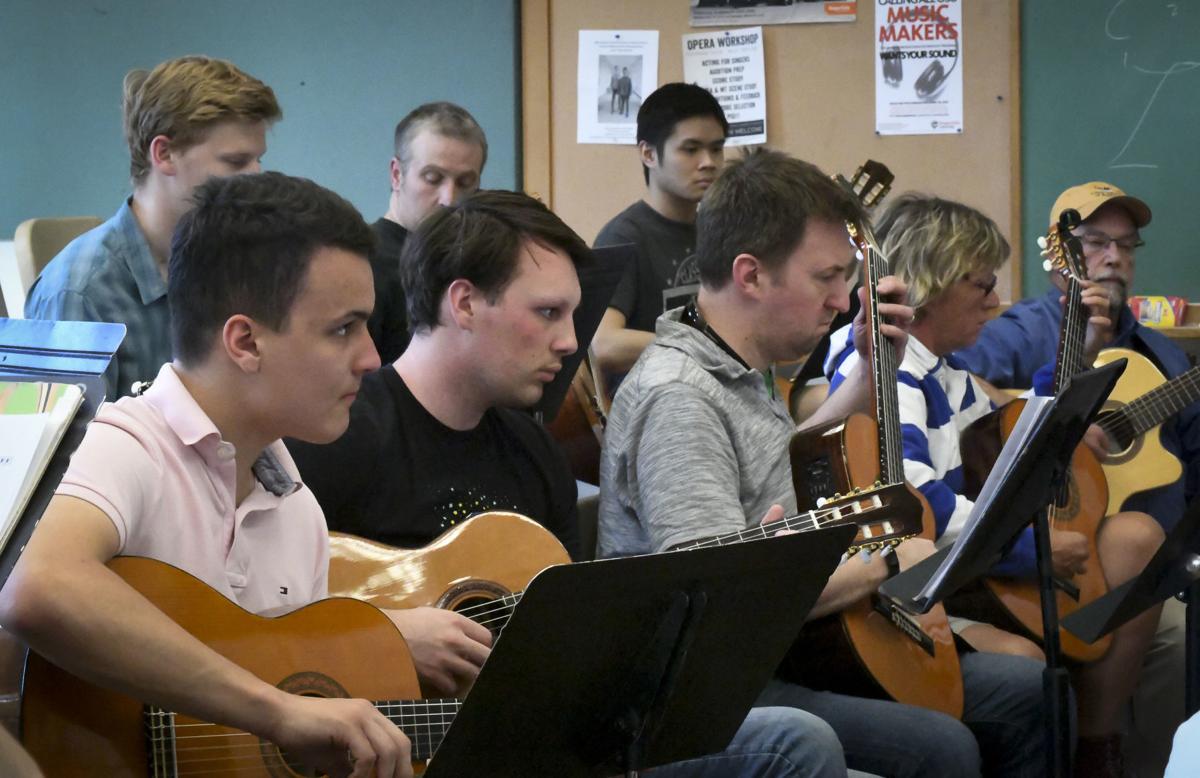 The OSU Guitar Ensemble features a variety of musicians from all walks of life. 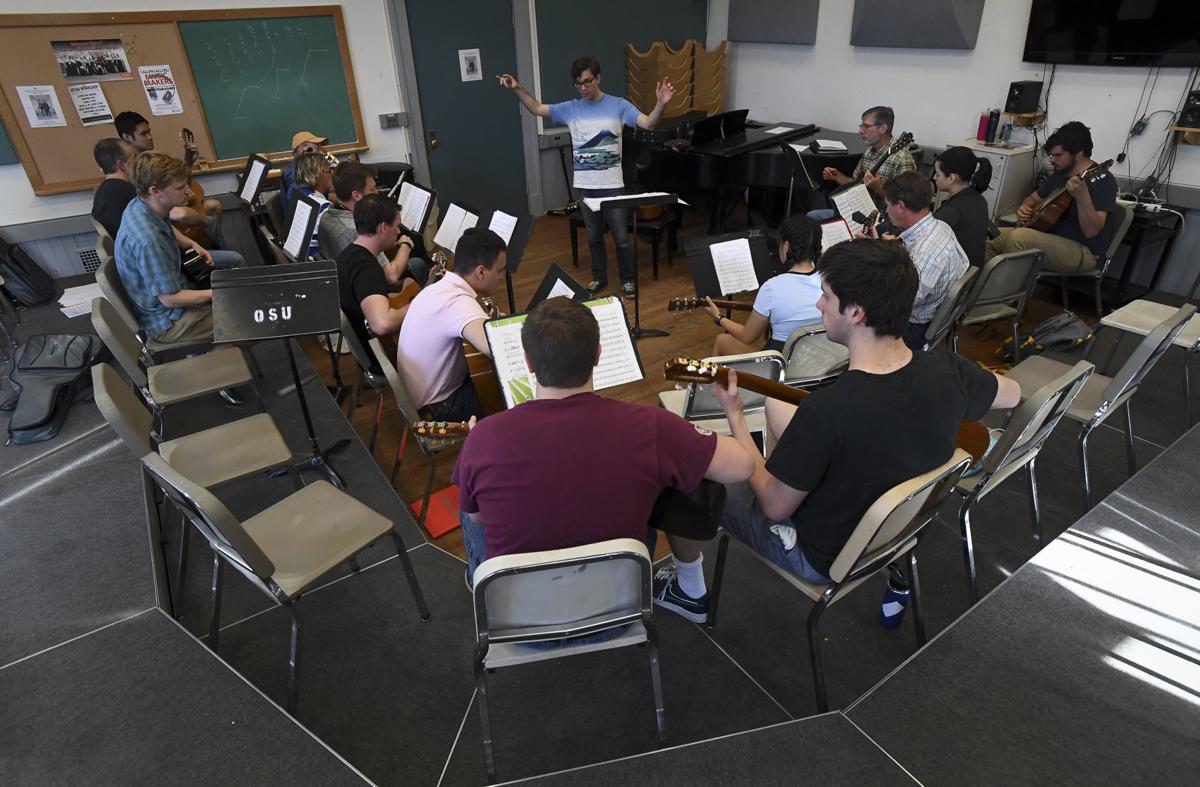 O'Connor directs the ensemble in a rehearsal Monday night. The ensemble plans to perform a variety of music in its Saturday showcase.

PATRICK FANCHER for The E

Actually, it's both. All under the direction of Cameron O'Connor, a teacher, classical guitarist and composer.

The ensemble, which performs Saturday night at the third annual Corvallis Guitar Festival, is a collection of classical guitarists of all ages, life experiences and skill levels. It features OSU students, early in their guitar studies, as well as OSU faculty members and several seasoned players from the Corvallis Guitar Society.

It is also an advanced guitar class that meets twice a week to rehearse for 50 minutes in OSU's Community Hall. And playing in concert is a requirement for this class.

The class, which has rehearsed this program since early April, was launched in the winter of 2017. It only had four people to start with, O'Connor said.

When the OSU Guitar Ensemble takes the stage Saturday night at the First Presbyterian Church of Corvallis, its ranks will have grown to 18 musicians. The performance is part of an all-day event, presented by the Corvallis Guitar Society, which also includes workshops and concerts by Hawaiian guitarist and ukulele player Ian O'Sullivan and Grammy Award-winning classical guitarist Bill Kanengiser.

The ensemble's performers come from many walks of life. For example:

• Jon Sharp is a classical guitarist and teacher who has played the guitar since he was 10. The 56-year-old is president of the Corvallis Guitar Society.

• Matt Campbell, 46, is an OSU professor of mechanical engineering. He switched from playing bass to the classical guitar about three years ago.

• Corvallis native Zoe Moulton, 19, is a double major in bioengineering and music at OSU. She has played folk/rock and classical guitar for eight years under local instructors including Sharp.

Sacco noted that being a part of the ensemble is a cool experience: Learning to read music and how to play it well are skills that he can carry with him the rest of his life.

Despite their different backgrounds, the players are united by a common thread: the opportunity to learn from and play arrangements by O'Connor was appealing.  O'Connor, a prominent classical guitarist and composer, joined the OSU music faculty in the fall of 2017 and introduced a new guitar program.

The 31-year-old holds a master of music degree from the Juilliard School in New York City. O'Connor also received his doctorate degree from the University of Southern California Thornton School of Music, where he was a teaching assistant to Bill Kanengiser, the festival's headlining guitarist.

He has performed solo and chamber recitals all over the world and won several international guitar competitions.

Tom Strini, 69, has a master degree in classical guitar performance, though he put that on hold for more than 25 years to work as a music and dance critic for the Milwaukee Journal Sentinel. The OSU writing instructor and Corvallis Guitar Society board member is one of the ensemble's veteran guitarists who was eager to work with O'Connor.

"We still can't believe he's here," Strini said. "He is one of the greatest young virtuosos in the country."

Sharp, who founded the Corvallis Guitar Society with flamenco guitarist and composer Berto Boyd in 2015, said his group encourages all mid-valley guitarists to come play together on stage. The OSU Guitar Ensemble is a more formal extension of that. Community members had to sign up for the class to play in the festival.

"This is a great place to come if you want to take it more seriously," Sharp said. "An ensemble is great, and this is really expanding."

Moulton was inspired to get involved after seeing the ensemble in action.

"I went to a few performances of this ensemble before coming to OSU, and I knew that I’d have to join," she said. "The ensemble is super fun to play in. People come from all sorts of backgrounds and skill levels, and yet Cameron is able to find a place for everyone."

Chris Boulgren, a colleague of O'Connor's on the OSU music faculty, has been with the ensemble throughout the academic year. The 46-year-old, who is primarily a percussionist but has also played the electric guitar since he was a teenager, saw a chance to expand his musical abilities.

"When the opportunity to play in this group arose I really jumped on it, because it was the opportunity to develop a different skill set for me," Boulgren said. "The classical guitar with finger picking is new to me and really fun to learn."

O'Connor said he gets a feel for where the ensemble is at the beginning of each term, giving students parts to play based on their ability with the guitar and reading music. His arrangements generally contain four parts.

For example, the first guitar part in an arrangement may have a higher melody or be more difficult part to play.

"That way everyone can be challenged at their current ability level," he said.

The instructor's favorite aspect of directing the guitarists is their diversity in skill level. O'Connor encourages students who took his beginning guitar class to join the ensemble.

He said some students will have a look of terror on their faces the first time with the ensemble, but through constant rehearsal, "they join the ranks of other veteran players who experienced the same thing the term before."

O'Connor has curated a mix of music for the festival, ranging from pop and contemporary to classical and Baroque music.

"I've heard this music for years. Placing it and having things written for this group has been really interesting," Boulgren said.

The 30-minute program will feature O'Connor's arrangement of The Beatles' "Here, There and Everywhere" by John Lennon and Paul McCartney, "La Paloma" by Sebastián de Iradier Salaverri, (George Frideric) Handel's "Allegro" and the "Trumpet Minuet."

Kanengiser will accompany the ensemble for its performance of "Pacific Coast Highway" by Andrew York. The song was originally performed by the Los Angeles Guitar Quartet, of which Kanengiser is a founding member.

Saturday's concert should be memorable for the 18 members of The OSU Guitar Ensemble.

"It’s the culmination of a lot of fun and challenging evenings. I’m sure whatever happens it will be an awesome time," Moulton said.

HOW MUCH: General admission is $15 (2:30 p.m. concert) and $25 for the 7 p.m. concert. Festival package is $52 (includes admission to both concerts plus a Corvallis Guitar Society T-shirt). Tickets available at the door, in advance at https://cgf2019.brownpapertickets.com/ or Grass Roots Books and Music in Corvallis.

The players in the ensemble say O'Connor is able to work with guitarists of different experience and skill levels.

The OSU Guitar Ensemble features a variety of musicians from all walks of life.

O'Connor directs the ensemble in a rehearsal Monday night. The ensemble plans to perform a variety of music in its Saturday showcase.