Albany public school students will no longer be greeted by police officers on the first day of school after some students and their families expressed fear and anxiety because of the officers’ presence last week.

Rumors circulating on social media prompted Melissa Goff, superintendent of Greater Albany Public Schools, to release a statement Wednesday addressing the district's decision to discontinue the tradition. Goff said the lack of officers assigned to campuses, often called school resource officers or SROs, is unrelated to the decision and was a result of shortfalls in Albany's city budget and staffing challenges in the Albany Police Department.

Goff described the decision as a “pause” in the district's tradition and did not indicate whether the change would be permanent.

“In this case, for some of our students and families, the presence of officers on campus created extra anxiety," Goff said. “After a year of being away from school, this exciting event was experienced with fear and surprise for some students, and does not reflect the trauma-informed approach we strive for in schools. Unfortunately, this turned what should have been a positive and exciting start into something different for these children, and that is not what we want for our students.”

Goff said the decision was made with the intent of ensuring all students feel safe on campus, not only the students who feel comfortable around law enforcement.

“As a result, we are making only one, but an important, substantive change: we are now actively listening to all those experiences and perspectives and considering them in decision-making for this future event,” Goff said. “Viewed through this lens, the picture becomes much clearer. Some students are certainly happy to have a sticker and a virtual high five. For some of our kids, the badge is a barrier that makes them uncomfortable walking through our doors.”

Albany fire personnel also typically greet students on their first day of school and will continue to do so when time permits.

Goff said inaccurate information about the decision has been circulating on social media, which prompted her to make a public statement.

The decision to “push pause on having police officers greet … students on their first day of school” was made after she and Albany Police Chief Marcia Harnden were contacted by a family to share their concerns, Goff said, adding that the school district still has a positive relationship with Albany police.

“We have always had a positive relationship with the Albany Police Department and appreciate all the positive work they do for our community,” Goff said. “We also are deeply grateful for all of our parents and their perspectives. We believe that together, both APD and GAPS can model for our community how to repair relationships and build trust. We are hopeful to celebrate with Chief Harnden at our upcoming ribbon-cutting ceremonies at (South Albany and West Albany high schools), and we look forward to our continued collaboration in the weeks and years to come.” 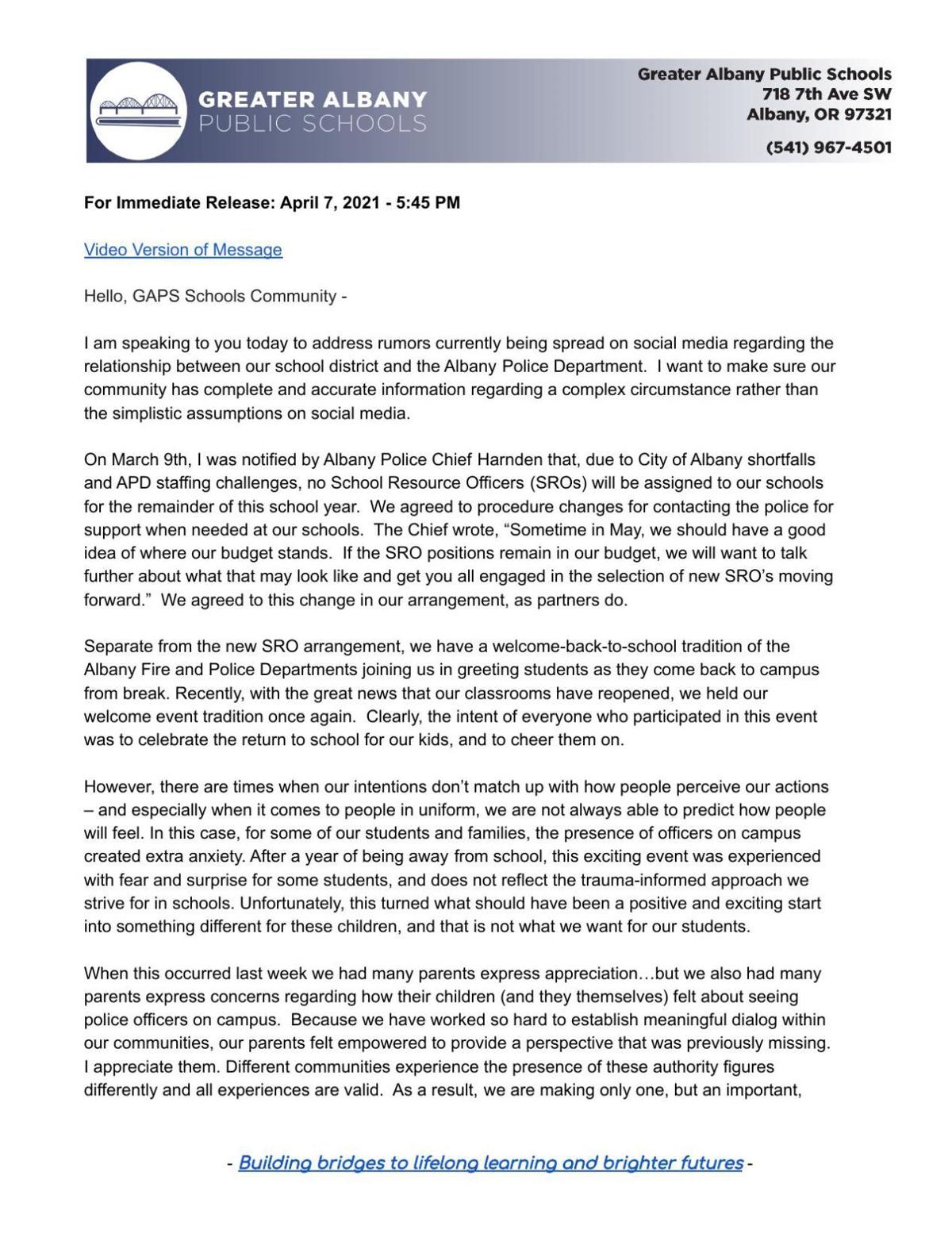 Albany police had not responded to requests for comment at the time of publishing.

Albany Police Chief Marcia Harnden arrived at Liberty Elementary School on Monday, but there wasn't an emergency — only a celebration.

May election will shake up area school boards

Both the Greater Albany Public Schools and Corvallis School District boards will look different after the upcoming election.

Albany police reported a bias incident in the city over the weekend, arresting an Albany man after responding to a neighbor dispute.

Police, firefighters will be present at Albany high schools for first day

Children lined the chalk-decorated sidewalks outside of Waverly School Tuesday morning for the first day of school, some donned in sparkly bac…

WH 'refining plans for all scenarios' in Ukraine

WH 'refining plans for all scenarios' in Ukraine

WH on SCOTUS and race in college admissions case

WH on SCOTUS and race in college admissions case