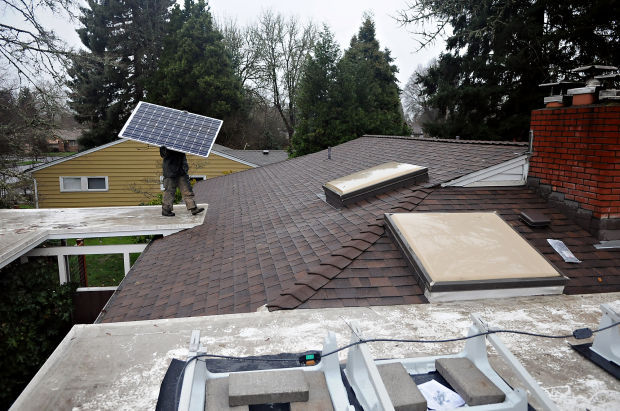 Adam Montgomery of Benton Electric Solar lends a hand to the installation of solar panels on the roof of a house in Corvallis in December 2014. Adding solar is one of the things residents can do to help the city win the $5 million Georgetown University Energy Prize. 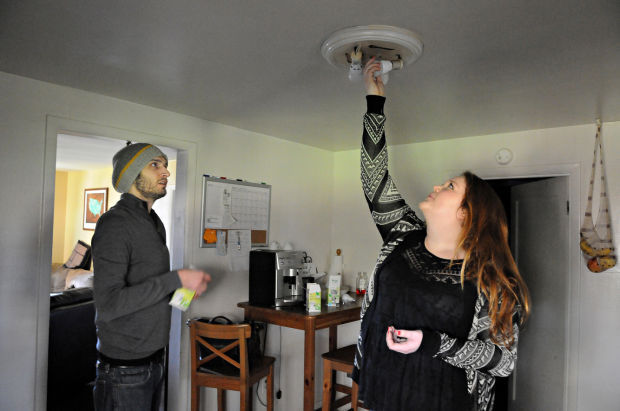 Corvallis has moved into the top 10 as the city-by-city competition to win the $5 million Georgetown University Energy Prize enters the home stretch.

“If we can remain in the top 10 until the end of 2016 we advance to the final round are one step closer to winning the $5 million prize,” said Sarah Spangler, the coordinator of the city’s bid to win the prize.

“We’re excited to finish this competition strong, but keep in mind: Winning is only the beginning. Can you imagine the work we could do with that $5 million? It’s going to be amazing.”

The contest invites communities between 5,000 and 250,000 population to compete against each other to develop and implement plans for reductions in per-capita energy use.

Huntsville, Alabama, is the current leader in the energy saving rankings, followed by Winter Park, Florida, and Aspen, Colorado.

Corvallis is the lone Oregon city in the top 10, although the list includes three Washington communities, Bellevue (No. 7), Bellingham (No. 8) and Walla Walla (No. 9).

Spangler said the Corvallis effort thus far has saved $1.9 million, with the savings built from 29 million kilowatt hours of electricity savings and avoiding the production of 16 million pounds of carbon dioxide.

Spangler and her team are hoping to reel in $20,000 in new grants this year to help the program. The group raised nearly $30,000 in 2015, including contributions of $15,000 from Pacific Power, $5,000 apiece from the city of Corvallis, the Corvallis Environmental Center and the Corvallis Sustainability Coalition and $4,500 from Energy Trust of Oregon.

Spangler said the group is hoping to interest Oregon State University and Linn-Benton Community College students in serving as canvassing interns during spring break and the summer.

In addition, Spangler is setting up a competition for local businesses to battle for prizes by recruiting participants in the campaign. First prize is $320, with the runner-up receiving 10 free tickets to the Earth Ball, which is put on by the Corvallis Environment Center.

The competition will take place in February and March, timed to coincide with college basketball’s March Madness tournaments. The deadline to enter is Feb. 10. Call Spangler at 503-961-4436 or email takecharge@corvallisenvironmentalcenter.org.

Here is how Corvallis residents can assist in the city’s bid to win the Georgetown University Energy Prize.

4. Get a solar electric system on your house with a zero-interest loan from Seeds for the Sol program

For more information on the program go to www.EnergizeCorvallis.org

Adam Montgomery of Benton Electric Solar lends a hand to the installation of solar panels on the roof of a house in Corvallis in December 2014. Adding solar is one of the things residents can do to help the city win the $5 million Georgetown University Energy Prize.