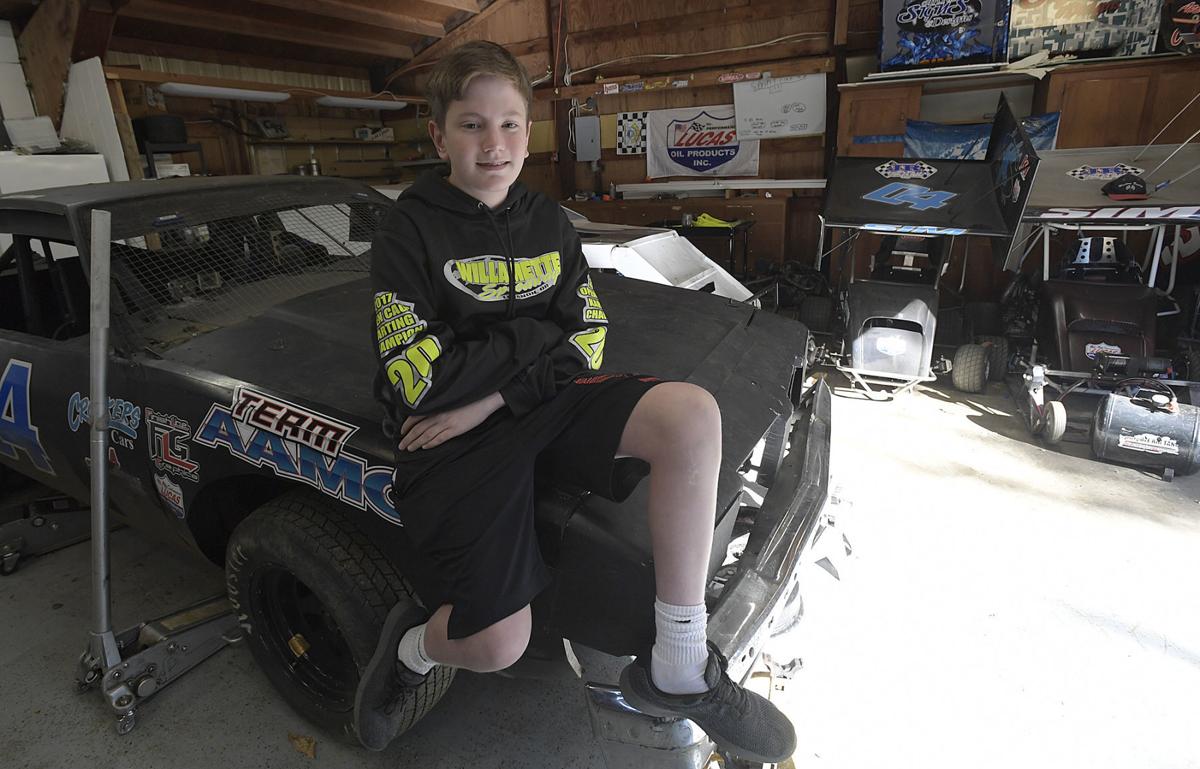 Despite having part of his left tibia replaced two years ago due to a tumor, North Albany eighth-grader Brody Sim has excelled on the race track winning both stock car and outlaw cart races. Brody will be one of 100 drivers competing in a race in North Carolina next week. 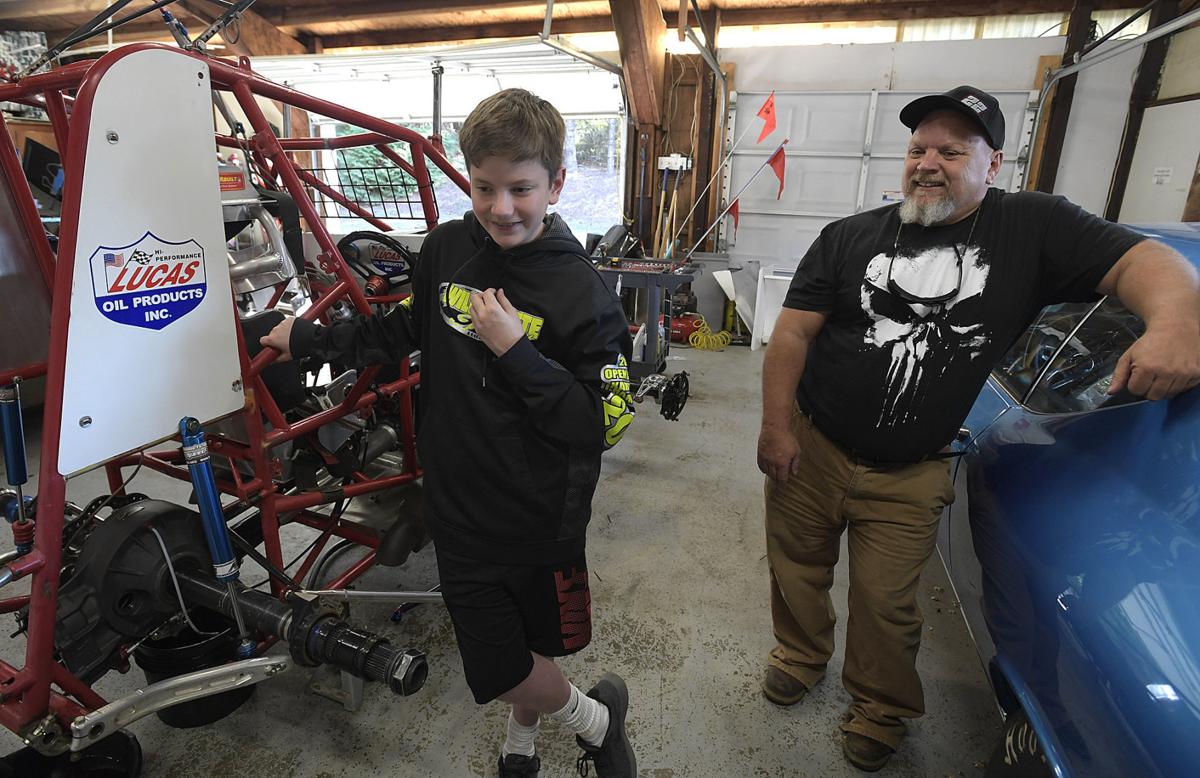 Brody Sim and his father Ed have been teaming up to race everything from BMX bikes to sprint cars since Brody was 4 years old. 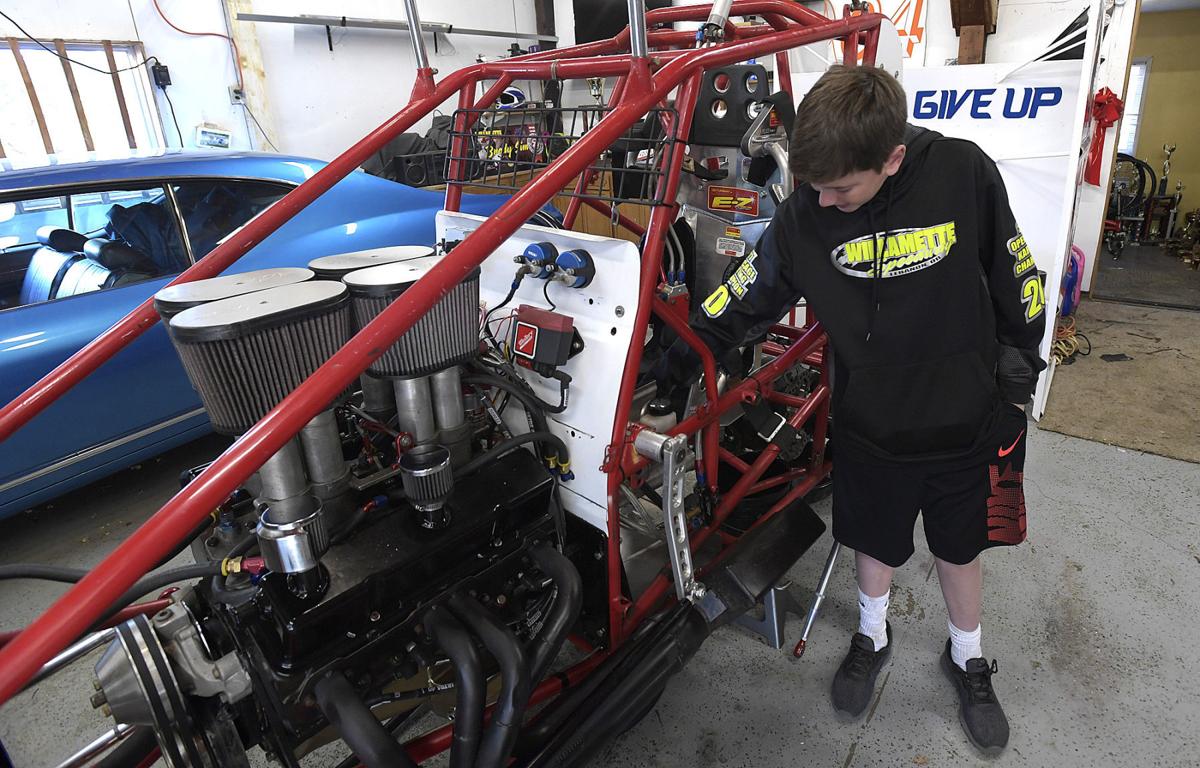 Brody Sim talks about the Sprint car he is working on with his dad after school. Brody plans to race the car next season.

It'll be at least two years before 13-year-old Brody Sim can even test for his Oregon driver’s license.

But in less than two weeks, the North Albany Middle School eighth-grader faces 99 other go-kart drivers in the Keith Munz Motorsports Giveback Classic at the Millbridge Speedway in Salisbury, North Carolina.

And if your concept of a go-kart is something that slowly goes round-and-round in a shopping mall parking lot, think again.

“I’ve been clocked going 82 miles per hour,” Brody said with a grin.

His father, Ed Sim, “got nervous.” That was too fast, he said, even for someone who raced 41 times this summer from Willamette Speedway near Lebanon to Cottage Grove, Red Bluff, California, and even Phoenix, Arizona.

But Brody’s tackled many challenges throughout his life, not all of them on a racetrack. He is adopted, having been born to a drug-addicted mother. He weighed only three pounds at birth and his lungs weren’t fully developed.

He deals with health issues to this day, with asthma-like breathing problems and at times debilitating migraine headaches. Every three months he meets for appointments at Oregon Health and Science University, where 42 shots are injected into his head. He has weekly doctor visits locally, and two years ago, when a tumor ate into a leg bone, he underwent a tibia transplant and had to learn to walk all over again.

But when Brody climbs behind the steering wheel of his go-kart, stock car or sprint car, all of that is forgotten. (Sometimes his health issues do resurface during competition. So he carries an inhaler, and if the migraines can’t be contained, he pulls off the track to rest.)

“I’m nervous before the race," he said, "but once we start, there isn’t time to think about anything else."

Brody's racing career began with BMX bicycles when he was only four years old. He didn’t learn to walk until he was two, but when he climbed onto a bike, he was a natural. He went on to win dozens of major races and was in contention to join a national team to compete internationally, but an injury ended that quest.

Brody said that on smaller race tracks, his top speed is about 45 miles per hour.

While most boys his age are concerned with bikes or skateboards, Brody and his dad spend about two hours after school each day tinkering with one of three race rigs. His go-kart is powered by a 500-cc engine, and his Oldsmobile Cutlass stock car and new sprint car are each powered by 350- and 360-cubic-inch V-8 engines. All have brought exceptional results.

“I had a good summer,” Brody said. “I won four kart races and one main event stock car race in the street stock class.”

His father said older stock car drivers rushed to Brody’s pit area after the race to congratulate him.

“They don’t treat me any differently on the track,” Brody said. “But they were very nice to me afterwards.”

Brody enjoys all levels of racing but has a special affinity for go-karts.

“It’s something I can do in the winter as well as the summer,” he said. “It keeps me busy and focused.”

Brody's been racing go-karts for years and started stock car racing last summer. He finished second in his class in points and was named a fan favorite at Willamette Speedway.

Racing is a family affair that includes his mother, Monica, and 14-year-old sister, Angel.

But the law of the household: schoolwork comes first.

“It’s early in the school year," Brody said, "but I’m getting straight As so far."

Although the family is managing Brody’s health issues, Ed Sim recently retired after 30 years as a computer programmer for the State of Oregon. His wife continues in a similar position.

“I wanted to be here to help Brody with his medical issues, and to spend more time doing this,” Ed said. “It feels good to spend time together.”

Brody’s life story and talents caught the attention of Chris Rolfe of Creswell, who offered to provide the car and support if Brody would drive it.

“He’s an amazing guy,” Ed Sim said of Rolfe. “It’s really nice. Brody shows up and the car is there and ready to go.”

Brody’s newest adventure involves a sprint car. Brent Nugent of Lebanon is his crew chief and is helping Brody and his dad dial in the new rig. When he's not on a real track — and if his homework is done — Brody can be found enhancing his skills on an iRacing simulator.

The family travels in a large motor home and enjoys camping out at the racetracks.

Ed Sim plans to drive to North Carolina and Brody, his mother and team sponsors will fly there for the two days of racing sponsored by Toyota.

The winner of the event will get to ride in a specially-equipped midget racer at the 33rd annual Chili Bowl Nationals to be held in Tulsa, Oklahoma in 2019.

“I’ll drive anything,” Brody said of his passion for racing. “I hope to always race karts, though.”

LEBANON — Willamette Speedway is closed to the public until its management complies with Linn County’s Public Health and Safety Codes.

Despite having part of his left tibia replaced two years ago due to a tumor, North Albany eighth-grader Brody Sim has excelled on the race track winning both stock car and outlaw cart races. Brody will be one of 100 drivers competing in a race in North Carolina next week.

Brody Sim and his father Ed have been teaming up to race everything from BMX bikes to sprint cars since Brody was 4 years old.

Brody Sim talks about the Sprint car he is working on with his dad after school. Brody plans to race the car next season.