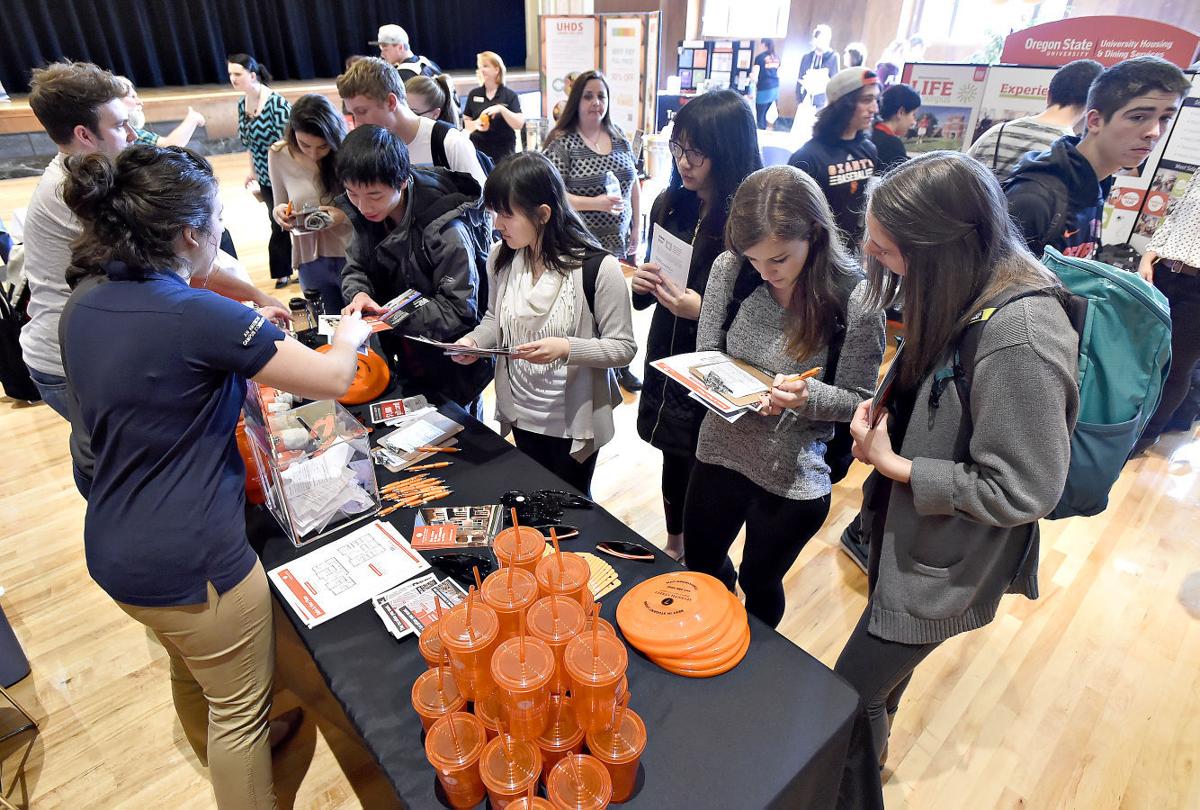 Students sign up for information about 7th Street Station during the OSU housing fair Wednesday afternoon in the Memorial Union ballroom. The housing fair offered an opportunity to learn about off-campus living options and earn discounts on deposits by attending preferred renter workshops. 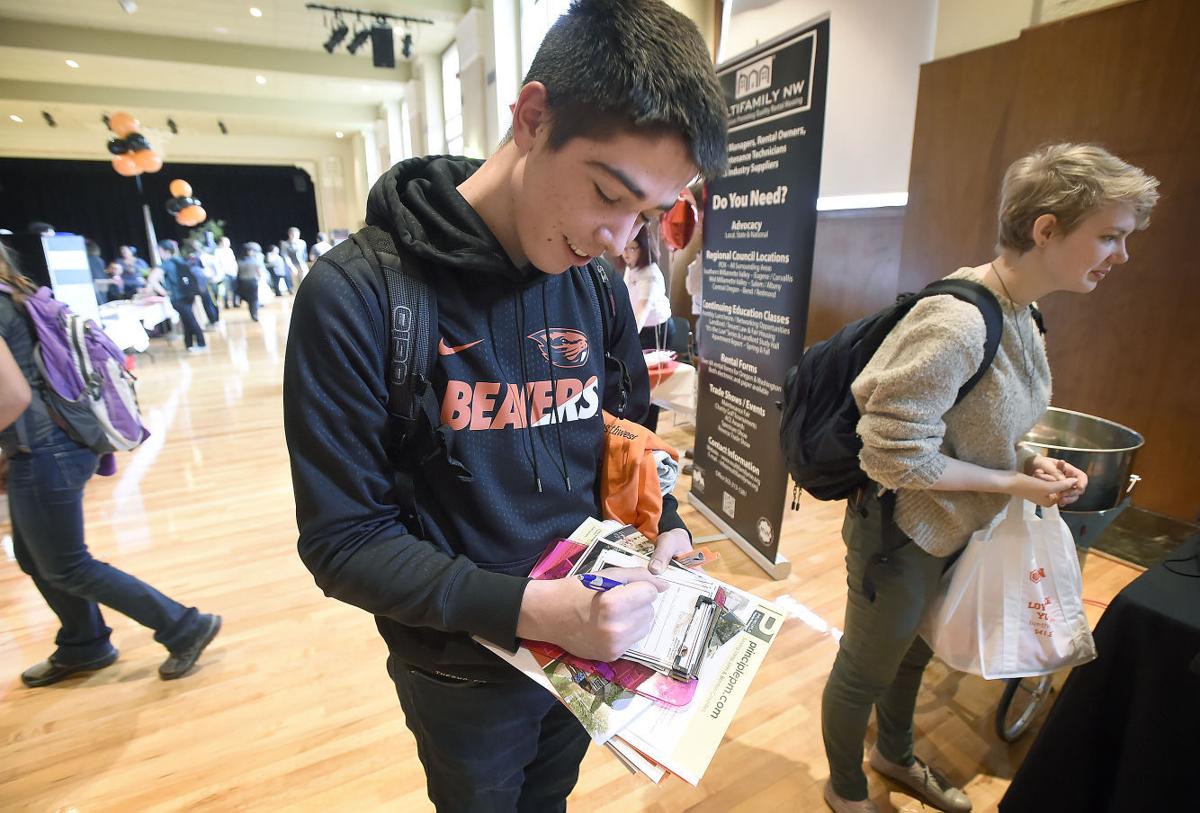 Oregon State University freshman Corey Groshong from Roseburg  fills out information for the Retreat on Wednesday at the OSU housing fair. Groshong plans to live off campus next year with two roommates and was at the fair to see some of his options.

Associated Students of Oregon State University President Cassie Huber, who was working the sign-in booth, noted that more than 200 students came through the doors in the first 90 minutes of the four-hour event.

Approximately 250 attended last year’s fair. The first fair, in 2014, drew approximately 1,000 participants, but organizers did not do a precise person-by-person head count. Jonathan Stoll, OSU’s community relations coordinator, said he was hoping for a turnout of 500 on Wednesday.

The fair included 25 vendors, a mix of property managers and landlords, university services and government entities such as the Corvallis Fire Department and city of Corvallis housing services.

Austin Vick, a freshman in biology/pre-med from Portland, and Annabell Schulz, a psychology major from Pleasanton, California, were on the prowl for a townhouse for themselves and two other people.

“We’re trying to get as much information as possible before we sign up, and this seemed like a good place to start,” said Vick, who is living in the new Tebeau Hall dorm this year.

Vick and Schulz were spotted near the 7th Street Station table and said that they were impressed that the 3-year-old complex just east of the campus does not increase the portion of the rent if one member of the party moves out.

Alyssa Coulter, a community assistant with 7th Street Station confirmed that the facility has been using an “individual lease” approach since opening and that to her knowledge only the Retreat west of campus and the Union on Harrison offered similar packages. 7th Street Station also is offering a zero down/no security deposit deal and had some of the best swag at the fair: T-shirts, cups and frisbees.

Bob Loewen, the city’s rental housing specialist, said the question he is asked most often is “how do I find a place?” And Loewen brought the answer, a single sheet with phone numbers and email addresses for the main property managers and large complexes in town.

Corey Groshong, a freshman general engineering major from Roseburg, is living in West Hall dorm this school year. He already had scored an armful of pamphlets but was waiting for his two roommates to reach the fair so they could collaborate.

Ibrahim Alathari, freshman electrical engineering student from Kuwait, was hunting for deals rather than being locked in on housing type.

“I’m just trying to see what’s available at what price,” Alathari said, adding that getting a place close to campus also was high on his list.

Location was something Eric Saltveit and Kelly Saltveit of Preferred Properties Northwest were hearing a lot. Other things that prospective tenants were asking about were the size of bedrooms, amenities such as washers and dryers and … parking.

“Parking has been kind of a big issue in town,” Eric Saltveit said. “Having off-street parking is really important.”

Jim Patton, the city’s fire prevention officer, didn’t have any properties for rent. His concern was keeping students safe once they secure a place. The two most important pieces, Patton said, are having working smoke alarms and making sure that there is a window to escape through.

Patton noted that newer complexes such as 7th Street Station have all of the required fire safety bells and whistles, but that students should be cautious about safety issues when looking at older housing stock.

“That’s my biggest concern,” he said, “places that might not be up to snuff. A lot of these students are first-time renters, and it’s important to get them off on the right foot.”

The housing fair also offered one-hour workshops on off-campus living. Students who participate in the workshops and pass an online exam are eligible for $50 deposit credits with participating landlords. The workshops also will be offered at OSU residence halls and online, with property managers working on a possible session at one of their offices.

The original thought was too much saltwater would kill a beaver.

Students sign up for information about 7th Street Station during the OSU housing fair Wednesday afternoon in the Memorial Union ballroom. The housing fair offered an opportunity to learn about off-campus living options and earn discounts on deposits by attending preferred renter workshops.

Oregon State University freshman Corey Groshong from Roseburg  fills out information for the Retreat on Wednesday at the OSU housing fair. Groshong plans to live off campus next year with two roommates and was at the fair to see some of his options.