Ice is gone, but cleanup remains in mid-valley
Share this
{{featured_button_text}}
1 of 5 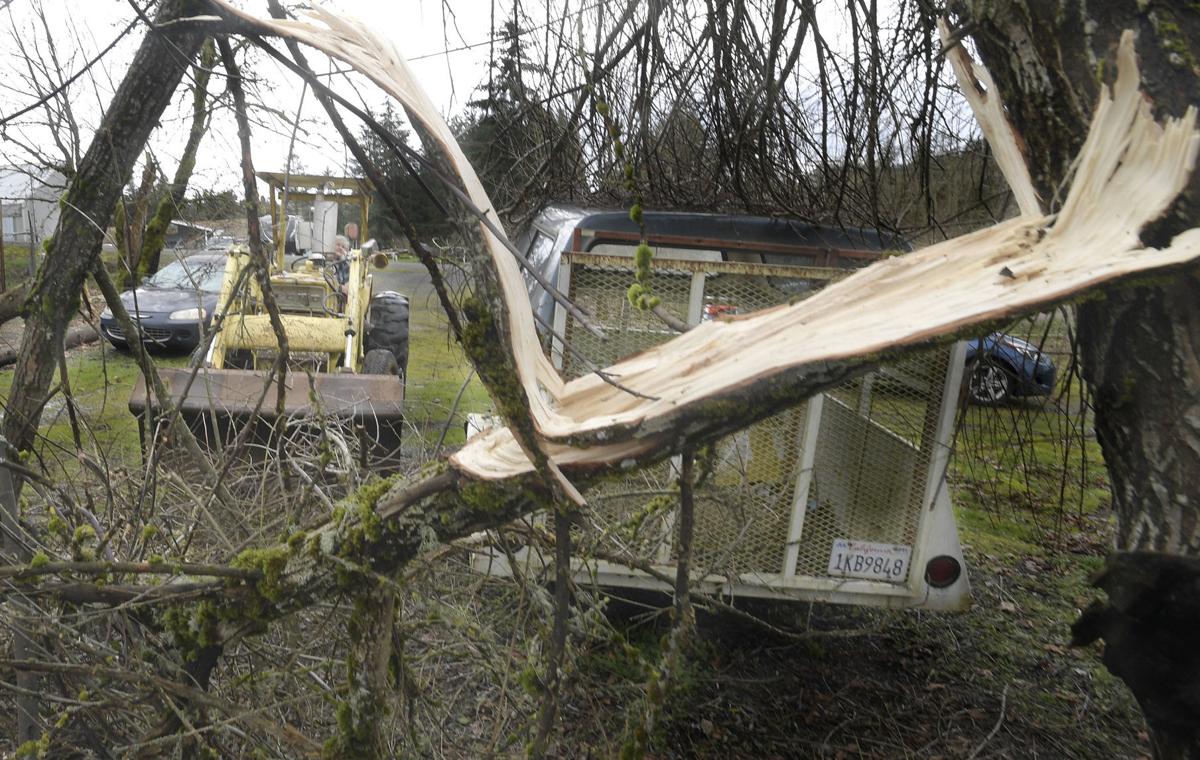 Sandy Kroker used the bucket of her Ford tractor to clean up debris after retrieving her car from under fallen branches on Loma Drive near Scio. 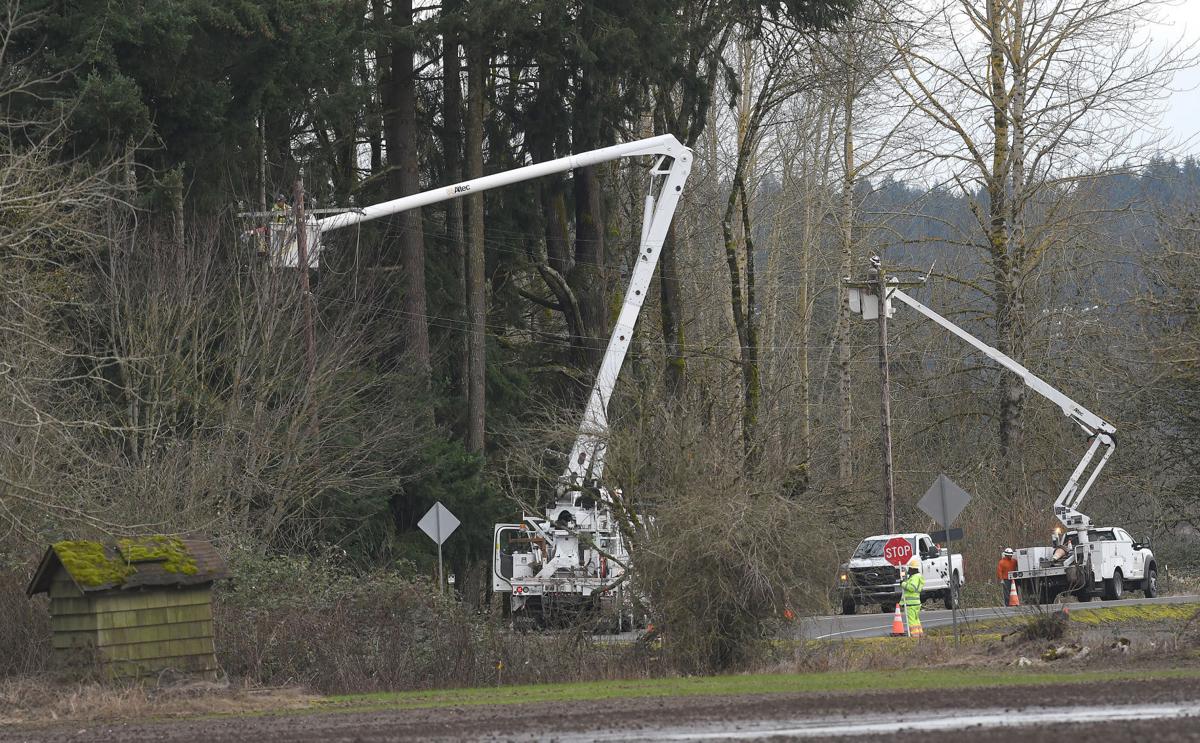 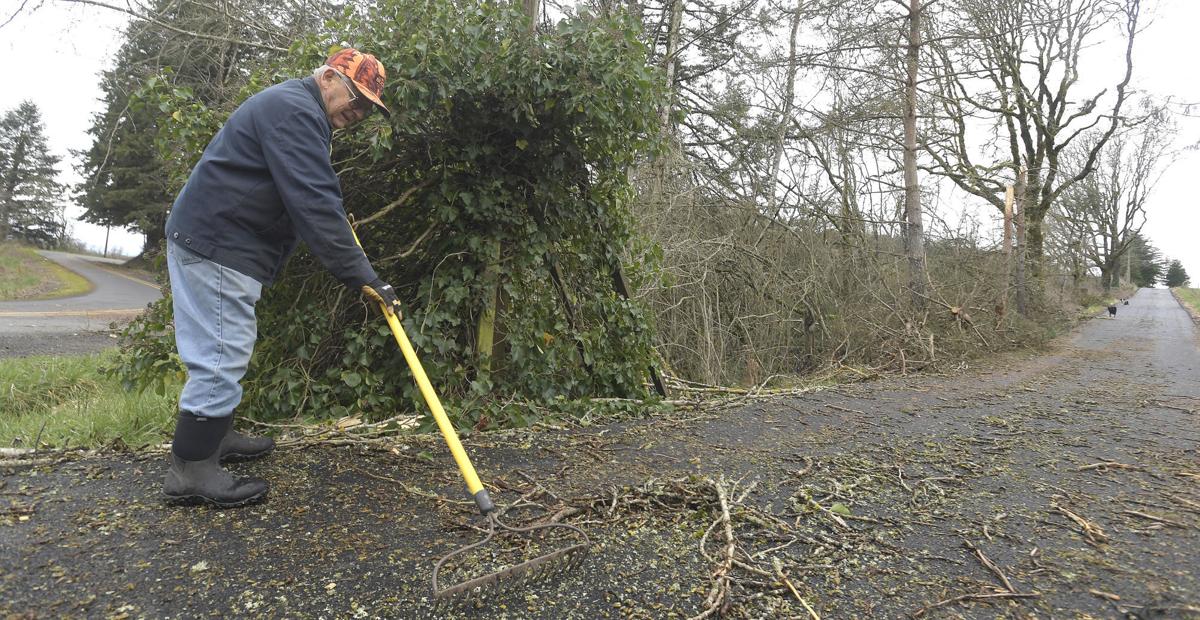 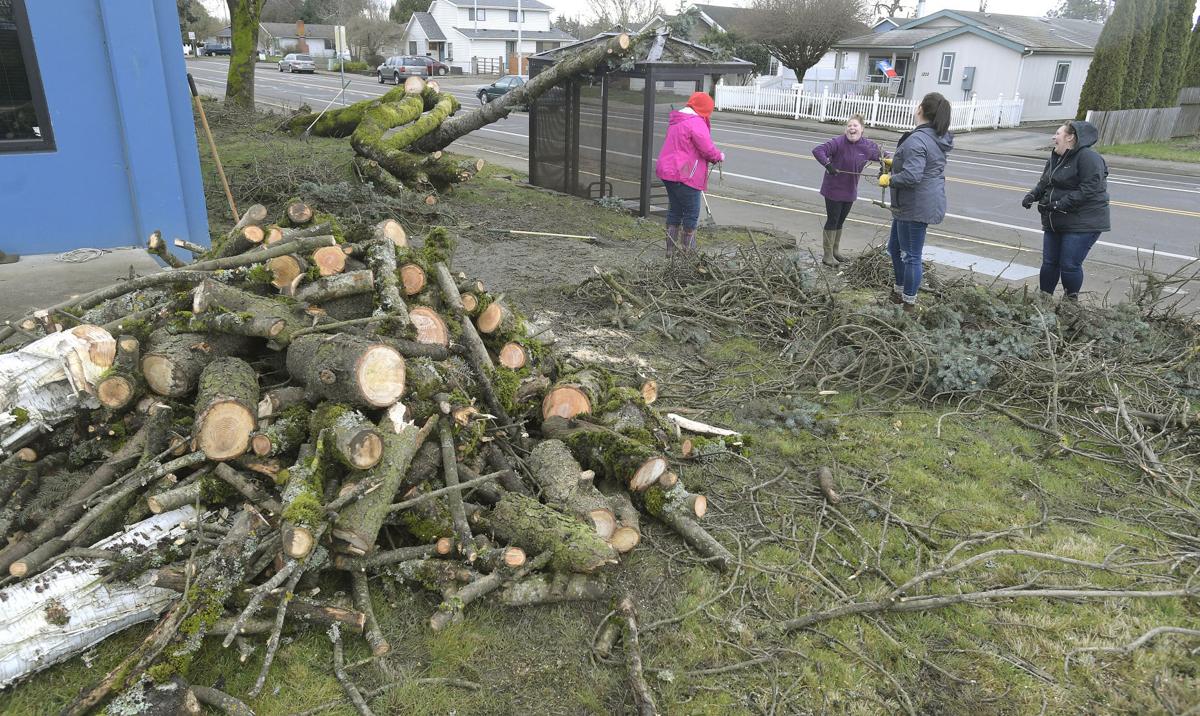 Employees of the Boys & Girls Club of Albany clean up two trees that fell along the Hill Street side of the club over the weekend. The workers had some extra time for cleanup since there were no children at the club due to the Presidents Day holiday.

Trees lie across the Albany & Eastern Railroad tracks near the intersection of West Scio Road and Ridge Drive.

Although Portland took the brunt of a Valentine’s Day weekend snow and ice storm that rolled into Oregon through the Columbia River Gorge, Linn and Benton counties did not escape unscathed.

Tree limbs grew heavy with thick ice starting about suppertime Friday, and by Saturday morning, trunks and branches littered roads and yards and pummeled fences to the ground.

Sandy Kroker has lived on Loma Drive near Scio for 43 years and doesn’t remember an ice storm as bad.

In Saturday’s predawn hours, Kroker said, she heard “all kinds of popping and bumping sounds.”

When darkness turned to daylight, Kroker said, she found that numerous branches of a willow tree next to her home had snapped and the limbs were covering her car.

“I used the bucket on my tractor to lift the tree up and get my car out,” Kroker said.

Monday morning she was again using her trusty Ford tractor to move limbs away from her house and off her driveway.

“We’ve had lots of ice storms before, but not like this,” Kroker said. “There were trees down all up the hill.”

Down the road on Hungry Hill Drive, 83-year-old Larry Boone Brown was using a garden rake to clear small branches from the driveway to his 30-acre farm.

He was amazingly cheerful about what looked like it was going to be a lot of work.

“It’s probably going to take me until August to get everything cleaned up,” Brown said, laughing about his misfortune. “Our backyard is a mess.”

Brown said he has lived in the area all of his life except for three years in the Navy in the 1950s.

He said most of the damage happened Saturday morning.

“We thought it might warm up, but we had ice until the middle of the afternoon on Saturday,” Brown said.

In Albany, several staff members from the Boys & Girls Club were cleaning up the remains of two large trees that fell along the Hill Street side of the club over the weekend.

The storm, which shut down much of Portland, resulted in an estimated 4,400 downed power lines, leaving more than a quarter-million customers without electricity.

The governor’s action authorizes the Oregon Office of Emergency Management to activate the state’s emergency operations plan and respond to the weather emergency.

The order also opens the door for the Oregon National Guard, State Police and the Department of Transportation to assist.

Linn County Roadmaster Wayne Mink said the Scio area seemed to get the worst of the storm locally, but parts of Sweet Home and North Albany were affected as well, with many homes losing power.

“We ended up having to close a lot of roads because tree limbs were coming down right next to guys who were trying to cut stuff up,” Mink said. “It was just too dark and dangerous.”

Mink said most of the county’s work force was sent out to the Scio area.

“We didn’t have any flooding, but the trees went into power lines and the ice was really thick on the trees,” Mink said.

Monday morning, crews were out cleaning debris from roadways.

Mink said the Gates and Mill City area received about two inches of snow in addition to ice.

“I was pretty nervous Friday night, not knowing what we might wake up to,” Mink said.

Lt. Brandon Fountain of the Linn County Sheriff’s Office said there were no serious accidents linked to the storm, but “there were a lot of road hazard incidents.”

“The ice did cause some delay in our response times,” Fountain said.

“We will be assessing these roads and coordinate with the power companies’ progress,” Rash said. “All available road crews will be out focusing on cleanup for the foreseeable future.”

Repair crews from Pacific Power and Consumers Power have been working around the clock getting power restored to mid-valley customers.

Pacific Power’s Drew Hanson said there were more than 320 workers, including contract crews, in the mid-valley.

“By Tuesday we will have up to 370 people,” Hanson said. “Some folks will still be out of power Tuesday, and there may be a few isolated spots that are out of power as late as Thursday.”

Consumers Power in Philomath was reporting on its website there were about 2,747 customers without power. Of those, 829 were in Polk County, 888 were in Benton County and 704 in Linn County.

The Oregon Office of Emergency Management reminds Oregonians who may be using alternative heating sources to beware of possible carbon monoxide poisoning.

Carbon monoxide is a colorless, odorless, toxic gas produced when anything is burned.

The only way to know if you are being exposed to carbon monoxide is by using a detector.

• Use caution with kerosene or gas space heaters; use vented space heaters whenever possible and make sure they are cleaned and inspected.

• Never use a gas range or oven to heat your home.

• Check exterior exhaust vents to be sure they are clear of snow, ice and fallen debris.

• Do not use charcoal grills or camp stoves indoors.

• Never run a portable generator or any gas-powered engine in a basement, garage or other enclosed area, even if doors and windows are open.

Lifting mask mandate too soon for some in Houston

Lifting mask mandate too soon for some in Houston

US urging China to help with Myanmar violence

US urging China to help with Myanmar violence

Remembering the great flood of '96

After several decades in law enforcement and a year under his belt as Linn County sheriff, Dave Burright was used to getting phone calls at al…

Sandy Kroker used the bucket of her Ford tractor to clean up debris after retrieving her car from under fallen branches on Loma Drive near Scio.

Employees of the Boys & Girls Club of Albany clean up two trees that fell along the Hill Street side of the club over the weekend. The workers had some extra time for cleanup since there were no children at the club due to the Presidents Day holiday.

Trees lie across the Albany & Eastern Railroad tracks near the intersection of West Scio Road and Ridge Drive.