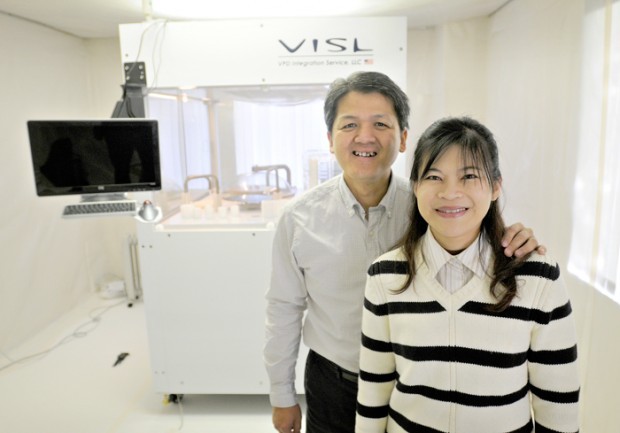 Yen Choo, left, and Yu-Hui Liao with the VISL Autoscanner they built in their office at the Business Enterprise Center. (Andy Cripe/Gazette-Times) 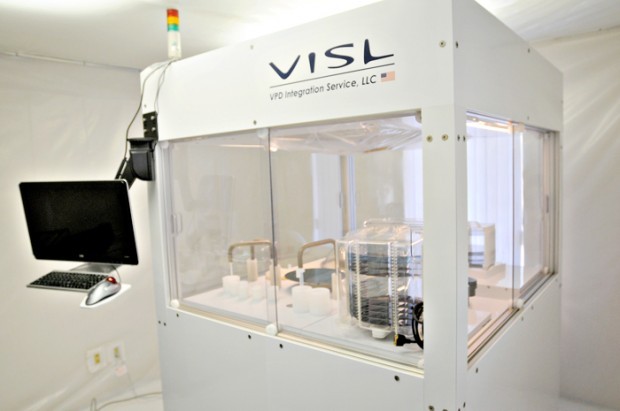 Yen Choo, founder of VPD Integration Service, is preparing his first product for shipment to a semiconductor fabrication plant in Korea. The machine — containing plastic bottles, tubes, electronics, wires and a robot arm — is big enough that it doesn’t fit out the door of his south Corvallis office space. So he’s taken off the sheetrock, exposing stud walls and conduits in preparation for the move.

“We’ll just go right out the wall,” he said.

VPD, a tenant in the Business Enterprise Center (BEC), the Corvallis business incubator, has plans to sell three to five of the $550,000 to $650,000 machines a year. Each is built individually at the BEC and takes about four to five months to construct.

Choo’s machine tests for the presence of heavy metals in silicon wafers, the base material for microchips. VPD stands for vapor phase deposition, the process by which acid is evenly distributed over the wafer in preparation to begin the testing process.

Semiconductor companies test one wafer in every batch of 25 for contaminants, looking for metals on the order of parts per trillion.

Choo previously worked for GeMeTec Inc., a German company that made similar testing machines and had great success bringing their testing products to Asian semiconductor plants. The company moved Choo to Austin, Texas, to put his experience to use in the U.S. market. But when the industry took a nosedive in 2008, just weeks after Choo relocated, GeMeTec went bankrupt.

“I didn’t want to stay, I didn’t know anybody there,” he said. “My wife’s sister lives in Corvallis, so we came up here to have someone else take care of us for a while.”

After about six months of soul-searching, Choo decided to take his knowledge and try to recapture some of the market vacated by his former employer. That’s when he found the BEC.

“I know all the customers and I’m very familiar with the process,” Choo said. “It’s a very small market.”

Besides offering space to plan and build the testing machines, the BEC provided Choo with business advising, other BEC tenants who contracted to write software and even stepped in to help Choo navigate the State Department.

When he decided to start his own business, Choo returned to Taiwan to ship his remaining belongings to Corvallis. But he was stopped when he tried to return to the United States because his visa had changed, and he would have to wait two years to return, according to Kathleen Hutchinson, executive director of the BEC.

Hutchinson said Choo was in the process of preparing to return to Taiwan — closing his local residence, taking his children out of school — when the center put him in contact with a representative for U.S. Rep. Peter DeFazio, whose congressional district includes Corvallis.

“He didn’t know anyone else here, and because he was affiliated with the BEC, we were able to make the necessary connections,” she said.

Just one other company is building products such as VPD, but they rely on hand-testing. Choo’s automated process prevents the chance of breaking expensive wafers and can accommodate up to 18-inch discs — material that is difficult and repetitive for people to effectively handle manually.

Linn County’s COVID-19 transmission risk designation is set to increase for the first time in weeks — from moderate to high, based on Oregon H…

Oregon reported 761 new and presumptive cases of COVID-19 on Saturday, according to the Oregon Health Authority. That’s the largest single-day…

Corvallis and Albany farmers' markets kick off in April

Farmer’s market season in Linn and Benton counties is kicking off this month, with the first outdoor marketplaces to be held in downtown Alban…

Yen Choo, left, and Yu-Hui Liao with the VISL Autoscanner they built in their office at the Business Enterprise Center. (Andy Cripe/Gazette-Times)