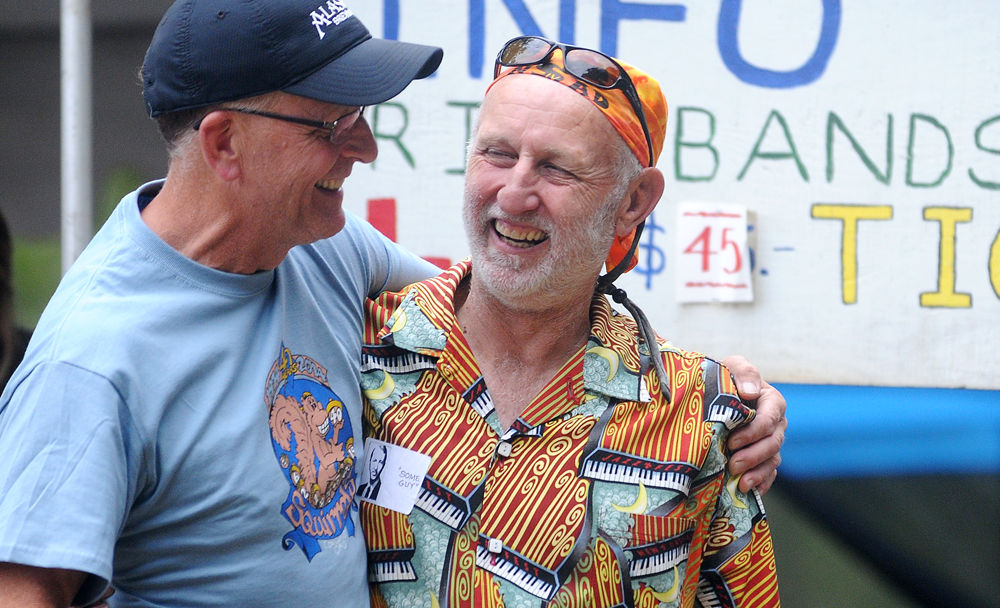 Squirrel's owner Greg Little gets a hug from Patrick Ford from Sammamish, Washington, during the 40th anniversary party for the tavern Sunday afternoon at Adair County Park. Ford frequented Squirrel's in the late '70s, and returned to the area for the party. (Jesse Skoubo | Corvallis Gazette-Times) 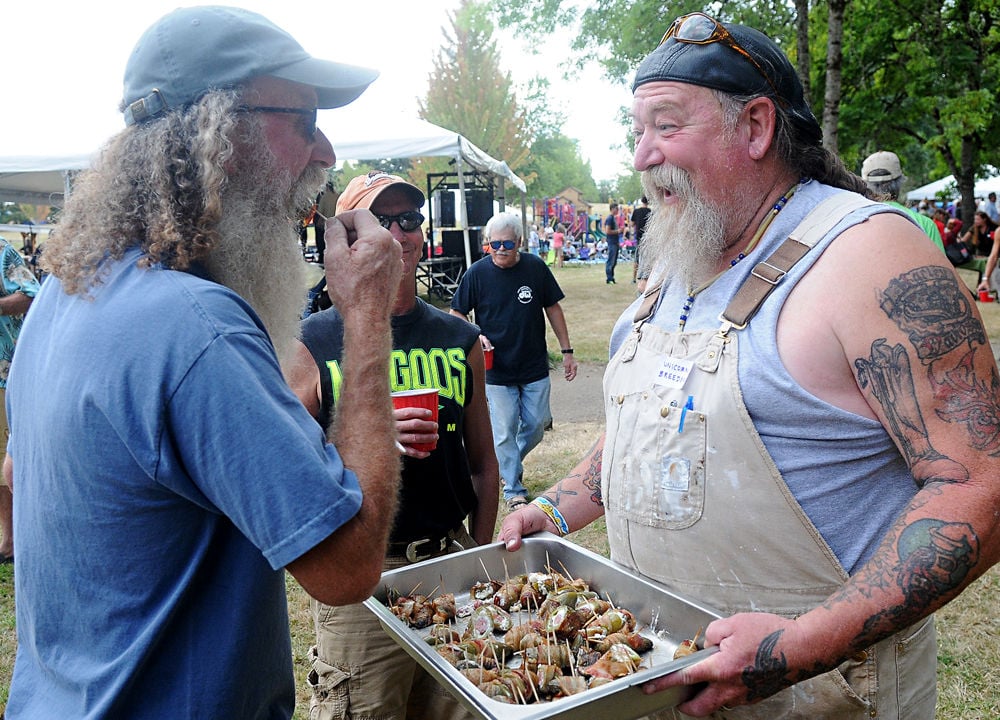 Hundreds were drawn to Adair County Park for the 40th anniversary celebration for Squirrel's Tavern on Sunday afternoon. They were treated to music, drinks, food, and games. (Jesse Skoubo | Corvallis Gazette-Times) 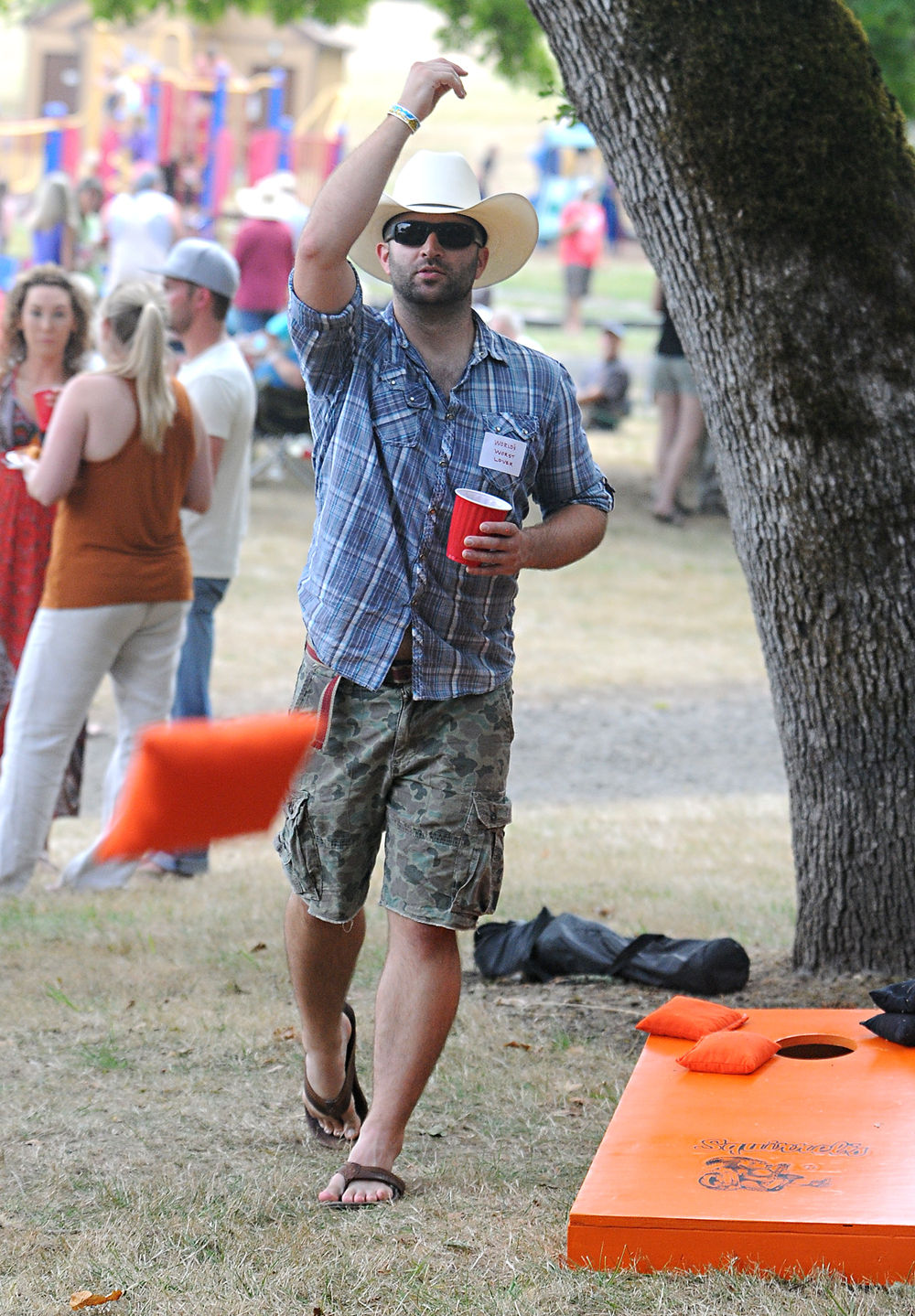 Everybody seemed to know everybody else. People greeted each other with handshakes, hugs and smiles.

They wore nametags that said things like “Unicorn Breeder,” “Compound-Eyed” and “Fool Hardy.”

The crowd was there to celebrate one thing: Corvallis landmark Squirrel’s Tavern started 40 years ago.

Greg Little, the founder and owner of the bar, said he park in Adair, which began Sunday afternoon. For $45, attendees got food, beer and live music, and could camp out Sunday night in the park and have breakfast today.

“It’s a way to get a collection of the Squirrel’s family together,” Little said of the event.

Little said the tradition of celebrating Squirrel’s anniversaries on Labor Day weekend began in 1976. The weekend is an easier time for people to attend than the date the bar opened because there is an extra travel day due to the holiday.

“It’s a great thing to have people come and hang out,” he said of the parties, which have ranged from 400 to 800 people through the years.

“I’ve had my highs and lows,” he said about running a bar for four decades.

Little said he’s seen a lot of change in Corvallis since his tavern opened, with its growth from a city of around 35,000 to more than 50,000 today. He also has seen huge growth at Oregon State University.

Little said he thinks the bar has its own community of patrons which shows up at events like this. He credits that spirit to a focus on being “softball central” in the bar’s early years and being the place for people to hang out after city league softball games.

“That gave us a strong foundation,” he said.

However, Jon Hancock, a friend of Little and an employee of Squirrel’s in the 1970s, said the friendly atmosphere that has made Squirrel’s a success through the years starts with Little himself.

“He is one of the best guys in the community,” he said.

Hancock said Little has supported a number of community causes through the years, such as sending kids to the county fair, through contributions and his own volunteer work.

“He’s made a lot of friends,” said Hancock. “I don’t think that there is anyone here who wouldn’t do anything for him.”

Stanford Lee said he painted one of the first murals at Squirrel’s Tavern in the late 1970s.

“Greg (Little) is such a nice guy that people enjoy being around him and he’s created such a nice atmosphere,” Lee said.

He said he enjoyed the party because he was seeing people he had known for decades.

“If I had to crystallize (the atmosphere) to two word I’d say ‘good vibrations.’”

Squirrel's owner Greg Little gets a hug from Patrick Ford from Sammamish, Washington, during the 40th anniversary party for the tavern Sunday afternoon at Adair County Park. Ford frequented Squirrel's in the late '70s, and returned to the area for the party. (Jesse Skoubo | Corvallis Gazette-Times)

Hundreds were drawn to Adair County Park for the 40th anniversary celebration for Squirrel's Tavern on Sunday afternoon. They were treated to music, drinks, food, and games. (Jesse Skoubo | Corvallis Gazette-Times)