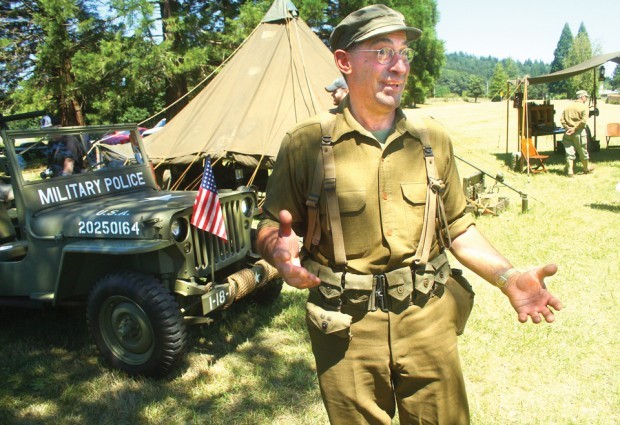 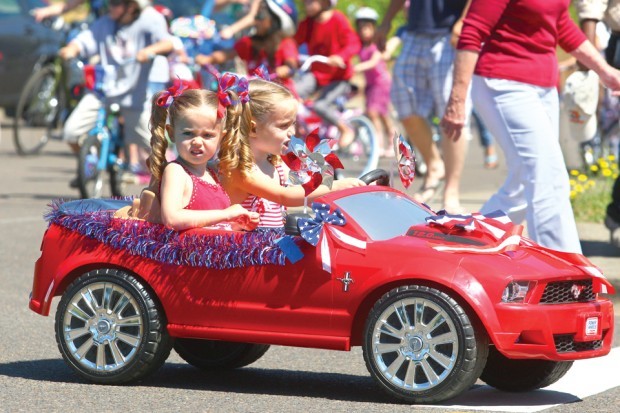 Isabelle, 3, and sister Lily, 6, cruse through the streets of Adair Village in style during the city's 4th of July parade on Saturday. ETHAN ERICKSON | Corvallis Gazette-Times

ADAIR VILLAGE — Last Fourth of July, Marie Andrews became frustrated by the short parade and small celebration that happened in her hometown of Adair Village.

“It is a small parade every year, and it’s just gotten smaller and smaller,” Andrews, 31, said. “And so instead of complaining about it, I decided to do something about it.”

So she and a group of other community members got together and planned something bigger, which came to fruition Saturday: a longer parade including World War II jeeps, classic cars and floats. The committee also expanded the festival that followed the parade: adding a dunk tank where kids soaked their local firefighters, a chili cook-off, a WWII replica booth, a model train setup and Brad’s Reptile World, where families got to see and touch tortoises and an alligator.

Andrews grew up in Harrisburg, which has a Fourth of July tradition that includes a firefighter pancake breakfast and a celebration that she remembers fondly.

“We have two small children, and we wanted to have a nice town tradition for them to grow up with, too,” she said. Her husband, Dusty Andrews, is a firefighter with Adair Rural Fire and Rescue. She said she hopes to grow the festival next year, eventually adding a pancake breakfast and getting more people involved in the planning to include things she hasn’t thought of.

Saturday’s festivities, though, were a good start.

“I’m just so happy,” she said. “We’ve been working on this for a year, so to see it come to life is so exciting. I couldn’t have asked for more.”

And community members noticed the growth of the celebration.

“The parade was about three times as long,” Deanna Hubele, 39, said. “This is really nice, and the kids think it’s pretty fun.”

The WWII display showed Adair Village citizens the history of their town, which was a military base named Camp Adair in the 1940s.

“The Army used to train here because the terrain is so similar to Germany,” Dan Lower, 55, said.

Lower was dressed in WWII military garb and drove a one of the ’40s military jeeps in the parade. He is a member of a WWII living history club that travels all over Oregon called Fox Company.

“It’s great to get to honor the vets — past, present and future,” Lower said. He also said that he was proud to preserve the local history of the town by showing it to the kids in the community.

“It’s great — everyone comes out and shows their community spirit,” Wendy McLaren, 35, said as she watched her kids play. Her husband, Robert, added, “It’s a great day to show what a fun place this is to live.”

Emily Gillespie can be reached at 541-758-9548 or emily.gillespie@gazettetimes.com.

Thursday is Thanksgiving Day. Here is a list of holiday schedules and closures for the weekend:

Wednesday, Nov. 23, is the last day to get something cleaned. After Thanksgiving, it will be pick-up only.

Every day, Stone Soup Corvallis serves meals to those who show up to the organization's soup kitchens in Corvallis, no questions asked.

Digital comics and puzzles are back!

Digital comics, puzzles and columns provided to this website's subscribers are back online after an outage this week.

‘Tis the season for a Christmas tree

Christmas tree permits are available for purchase from the Siuslaw National Forest now through Dec. 31.

Eating mushrooms in the wild

Oregon is home to hundreds of mushroom species and is one of the most diverse places in the world for fungus. In the Mid-Willamette Valley, there is no shortage of mushroom enthusiasts.

Deanna Jean (Bergstrom) Lyons passed away peacefully at home on November 7th, after saying goodbye to loving family and friends.

To no one’s surprise, Attorney General Merrick Garland has appointed a special prosecutor, Jack Smith, to investigate former President Donald Trump. You might think that you’ve seen this movie before. But there’s little reason to think this will be a repeat of the Robert Mueller investigation that declined to bring charges against Trump. Charges are more likely this time around — though that doesn’t guarantee they will stick.

Isabelle, 3, and sister Lily, 6, cruse through the streets of Adair Village in style during the city's 4th of July parade on Saturday. ETHAN ERICKSON | Corvallis Gazette-Times