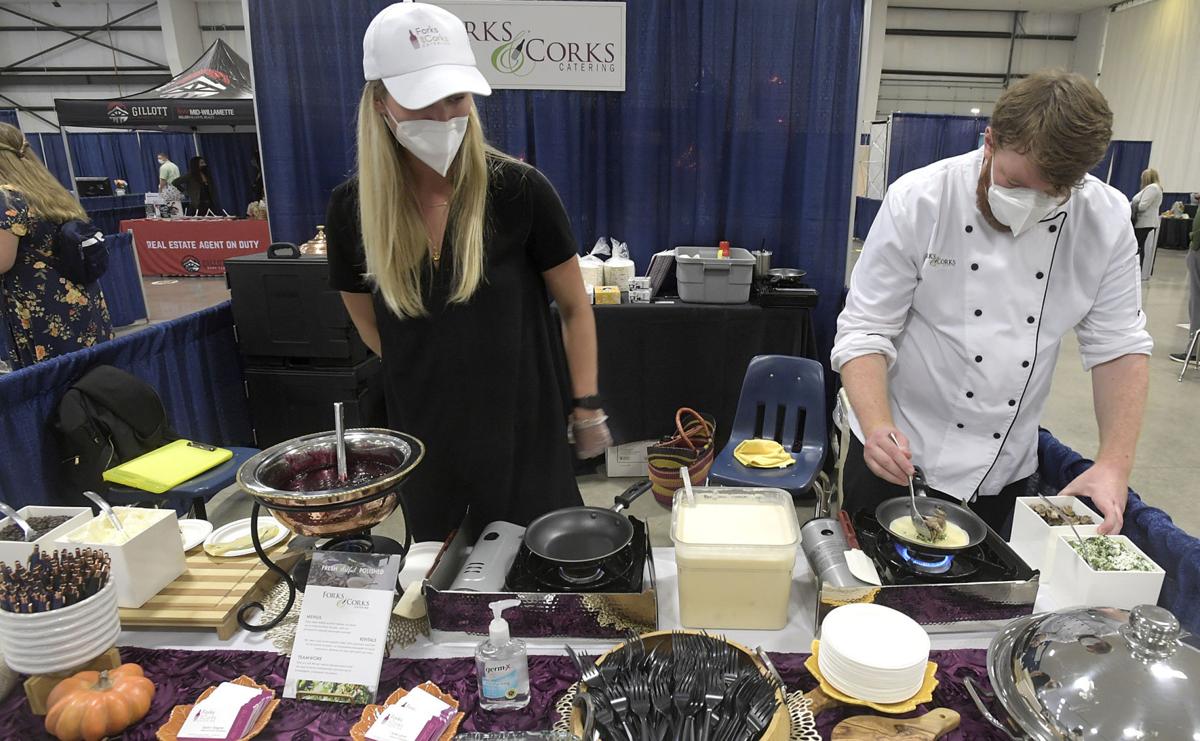 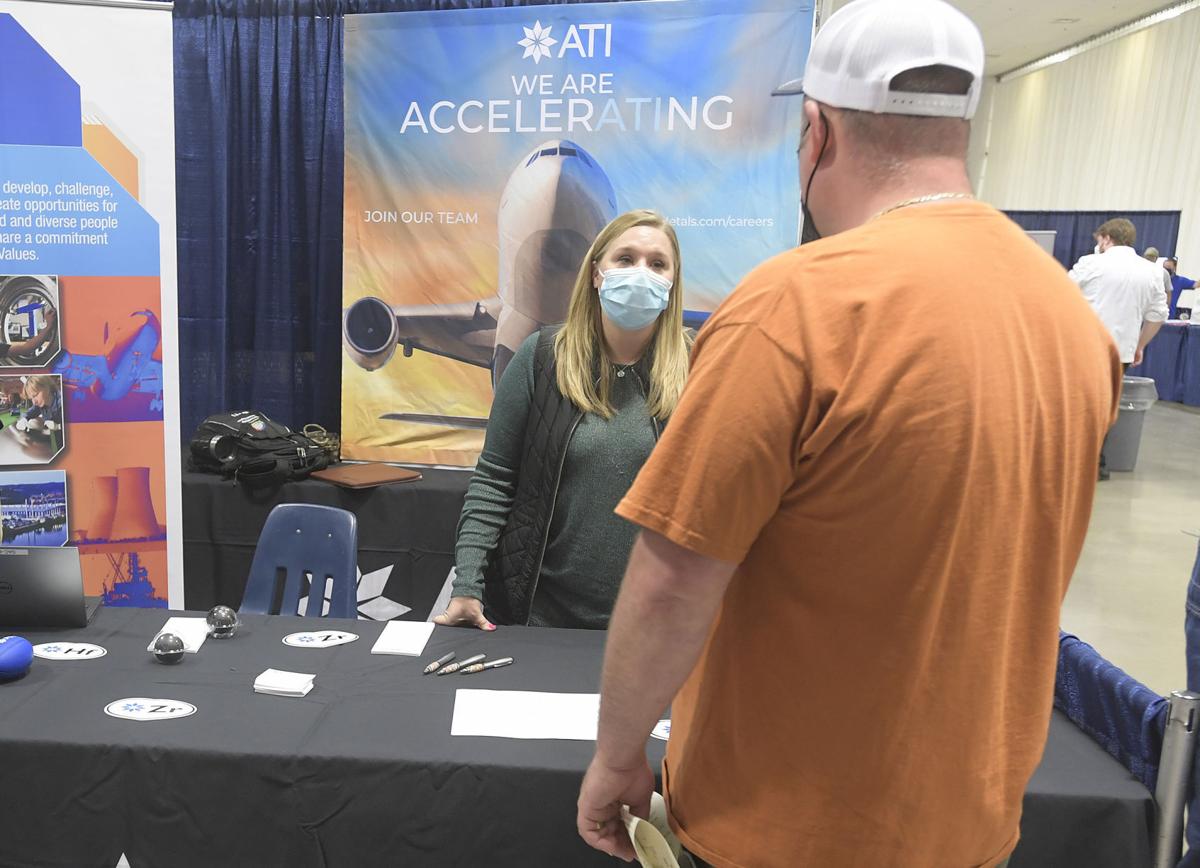 ATI's Jessica Louthan talks with Isaiah Trebes, whose job with Selmet was cut during the COVID pandemic. ATI currently has 60 openings that they are trying to fill. 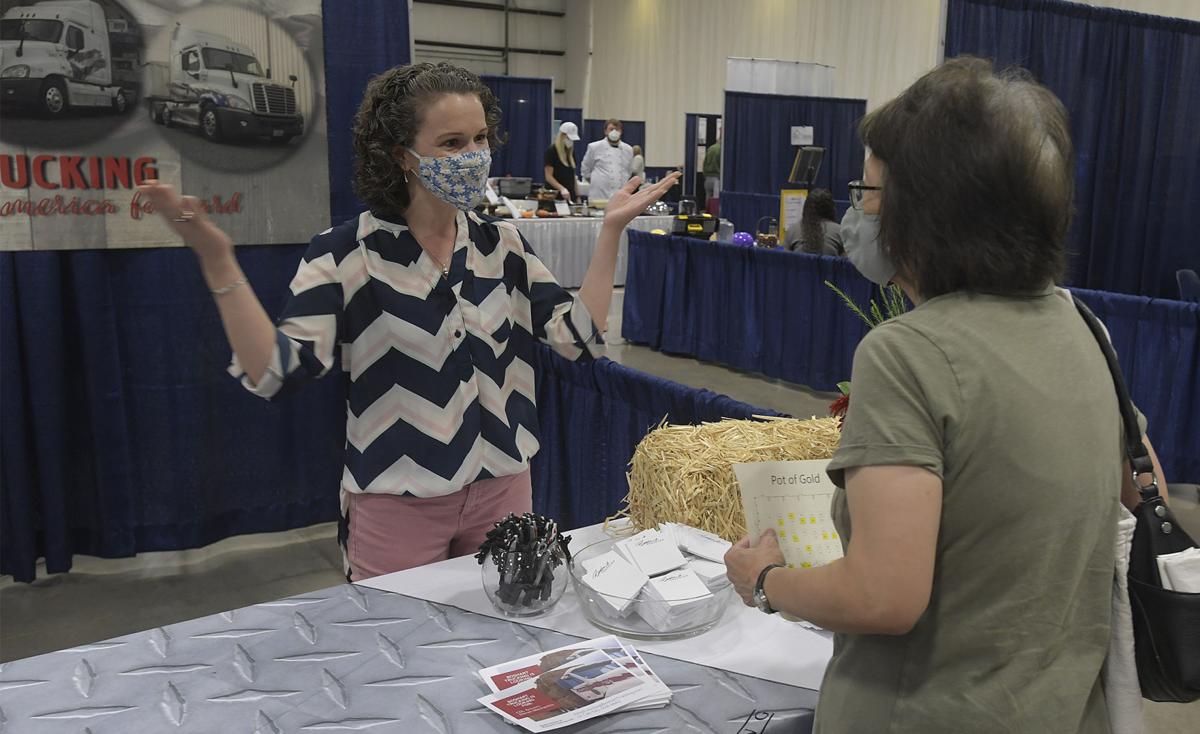 Hedie Schulte explains the benefit of trucking at the Boshart Trucking booth. 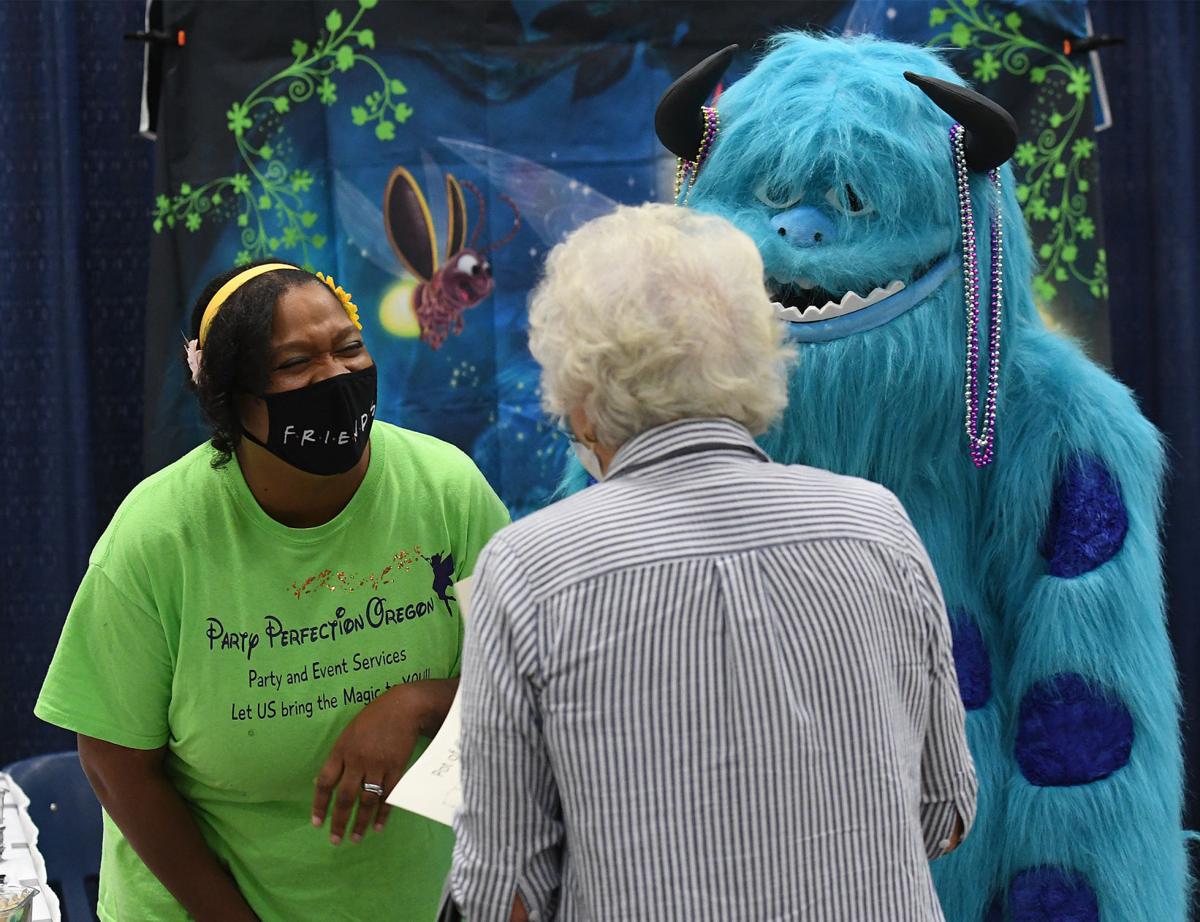 Cherita Wilson talks with Shirley Ackeret of Lebanon during the event at the Linn County Fairgrounds.

Over 70 businesses set up inside the Linn County Fair & Expo Center Wednesday for the 26th annual Albany Business Extravaganza.

While there were about 50 fewer booths than usual, Albany Area Chamber of Commerce president Janet Steele said that it was a relief to hold the networking, mentoring and hiring event in any capacity after taking last year off due to COVID-19.

“We’re pleased with this,” Steele said. “We also recognize that some businesses are just not ready to come out yet.”

The lack of booths was a result of many businesses being so short staffed that they were unable to send anyone to the event to represent their company.

The extravaganza began as a small event at the Albany Armory 26 years ago but has grown to become a huge networking event at the fairgrounds. Community members roamed around to become acquainted with local businesses, apply for jobs and take free samples at booths.

Hedie Schulte passed out business cards and lanyards to anyone interested in driving for Boshart Trucking, located in Tangent. She said commercial truck driving has turned into a “vintage skill," with more drivers retiring and not enough new ones to take their place.

“I'm here because I would love to find any commercial truck driver,” Schulte said. “Anybody who has any sort of driving experience and would like to drive again for a day or two a week or be a full time driver. I want people that can move products.”

The company, which transports straw through the Willamette Valley, is unique in that drivers do not have to commit to long hauls, but rather can work whenever it is convenient for them.

“I love to say that we’re weird,” Schulte laughed. “We’re totally flexible because it’s the right thing to do.”

“We're getting a huge amount of inquiries and people wanting to have events,” Lynch said. “So our future looks pretty huge and we're wanting to ramp up in anticipation of that.”

Cherita Wilson, who was at the event on behalf of Party Perfection Oregon, waved at onlookers alongside an employee dressed as Sully from "Monsters, Inc." The entertainment company takes care of virtually every aspect of a party, with face painting, characters, games, balloon twisting and henna tattoos.

“We do private parties and corporate events as well," Wilson said. "I think the main reason we're here today is to network with some of these businesses to let them know, hey, we're here to entertain your employees. We can entertain people at your events.”

Party Perfection Oregon is hiring people who are willing to learn balloon art and face painting, preferably those who can sing and dance. But the main qualification is the passion for the job.

“The number one qualifier is they’ve gotta love kids,” Wilson said. “Because adults like them, but the kids come running.”

WorkSource Oregon partnered with Albany Business Extravaganza for the event, as there were so many hiring opportunities. With expanded federal unemployment benefits coming to a close, many who were counting on that aid during the pandemic are now in need of a job more than ever.

The unemployment rate in Oregon, however, has dropped to 4.9% — the third time since 1976 it has gone below 5%. According to the Oregon Employment Department, this is the lowest rate since March 2020 when it was 3.6%.

Albany has tied with Salem for ranking the highest among metropolitan areas for regaining jobs in the state, according to a media release from…

The Corvallis Arts Walk is back to being partly in person, with the hybrid event taking place from 4 to 8 p.m. Thursday.

ATI's Jessica Louthan talks with Isaiah Trebes, whose job with Selmet was cut during the COVID pandemic. ATI currently has 60 openings that they are trying to fill.

Hedie Schulte explains the benefit of trucking at the Boshart Trucking booth.

Cherita Wilson talks with Shirley Ackeret of Lebanon during the event at the Linn County Fairgrounds.