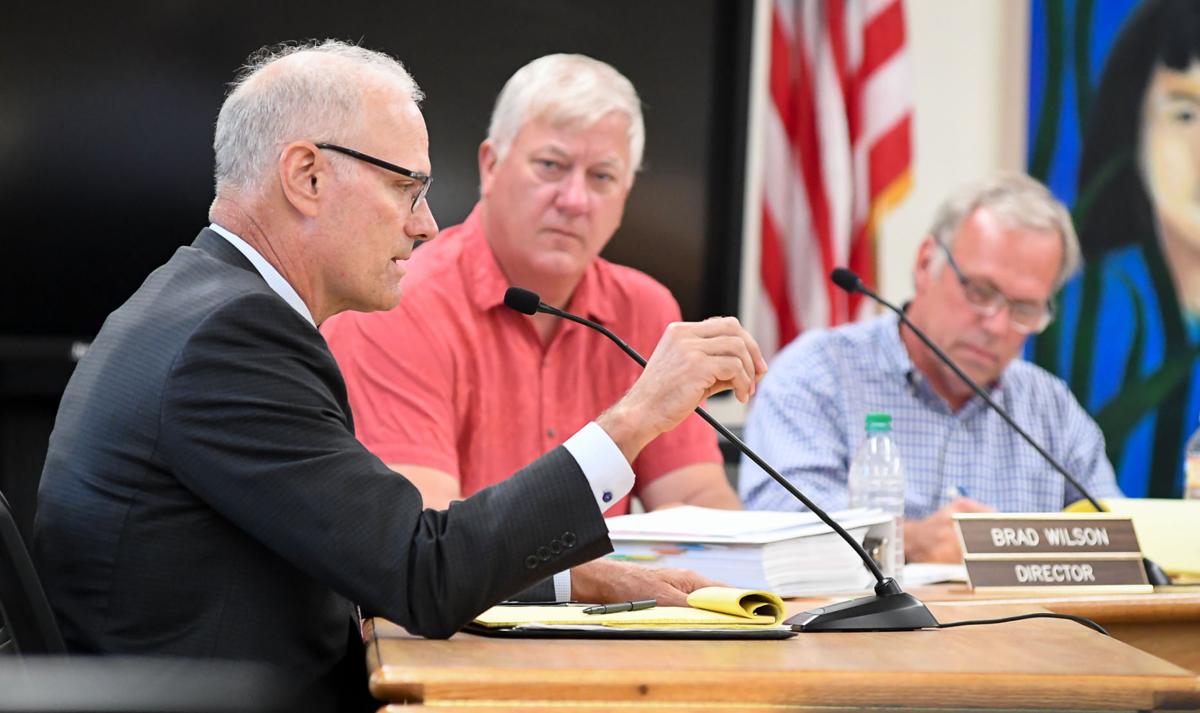 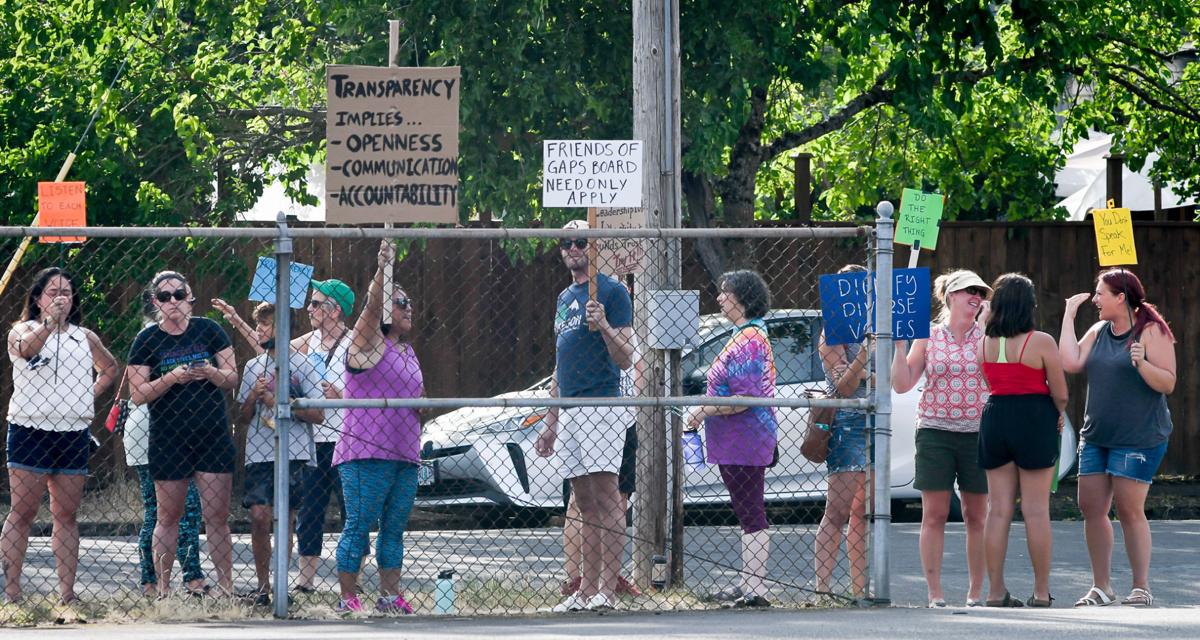 Community members voice their opinion as GAPS superintendent candidate Rob Saxton was interviewed by the school board of directors on Monday. 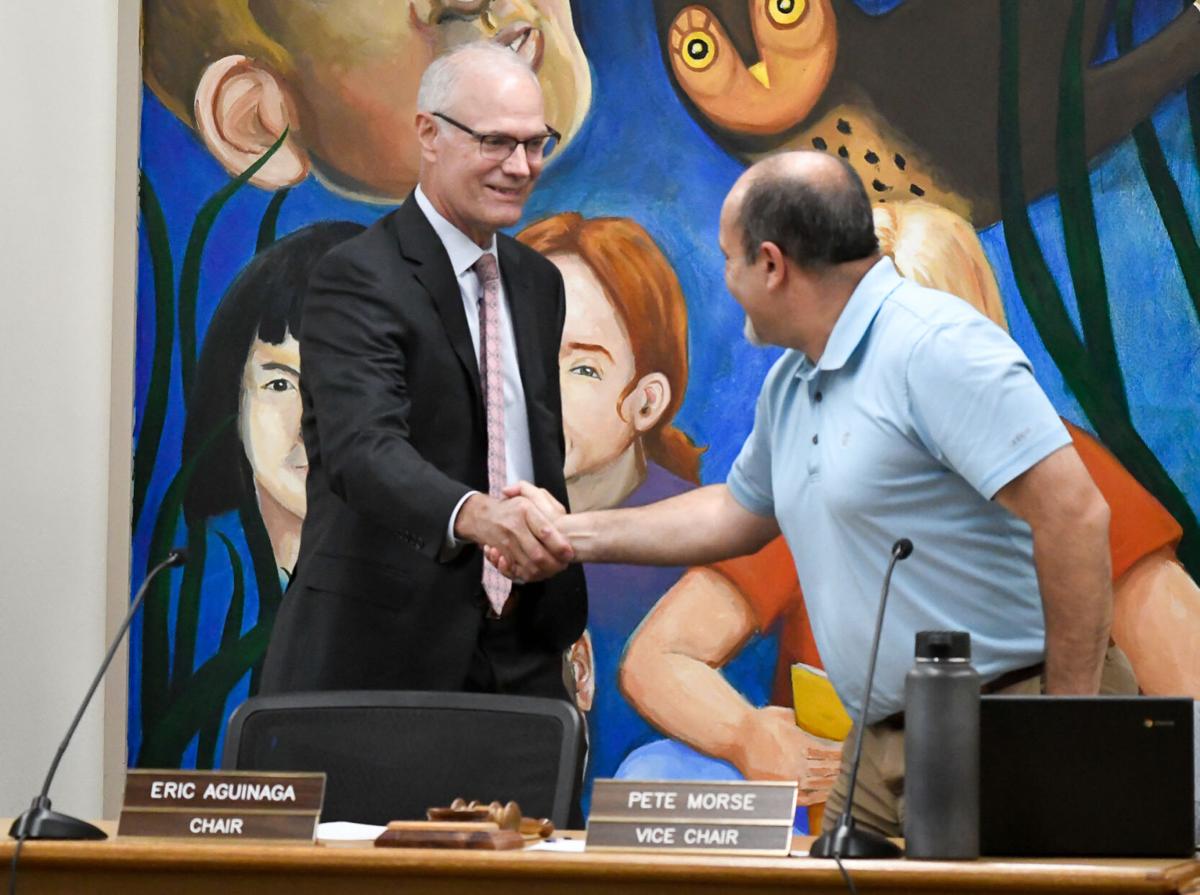 GAPS superintendent candidate Rob Saxton shakes hands with GAPS board chairman Pete Morse before he was interviewed by the board of directors on Monday. 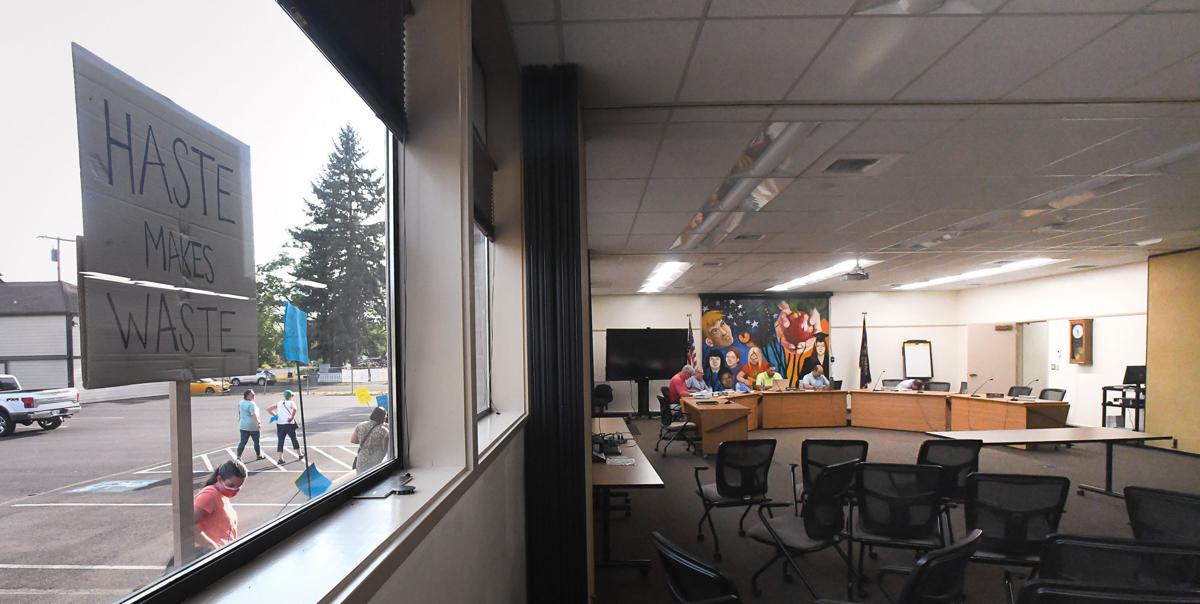 Community members hold up signs outside the building while Rob Saxton was interviewed by the Albany school board on Monday. 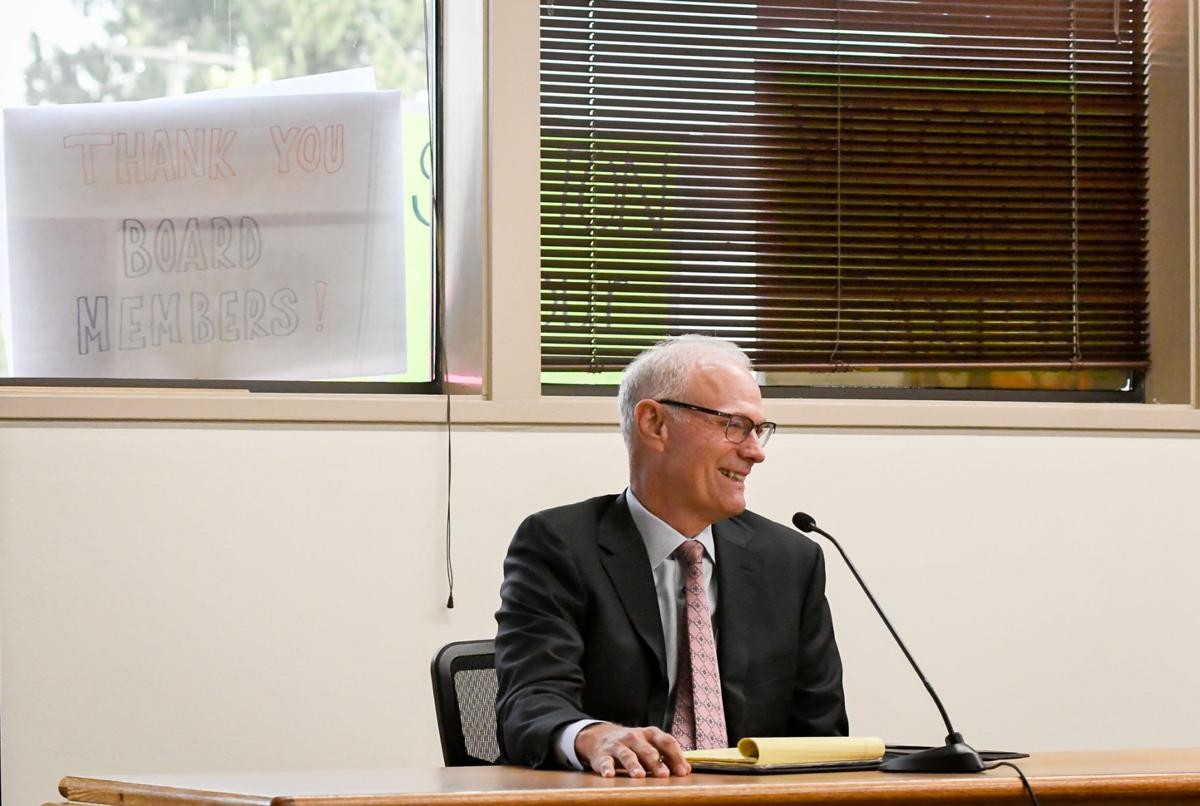 Community members hold up signs in support of GAPS superintendent candidate Rob Saxton as he was interviewed by the school board of directors. 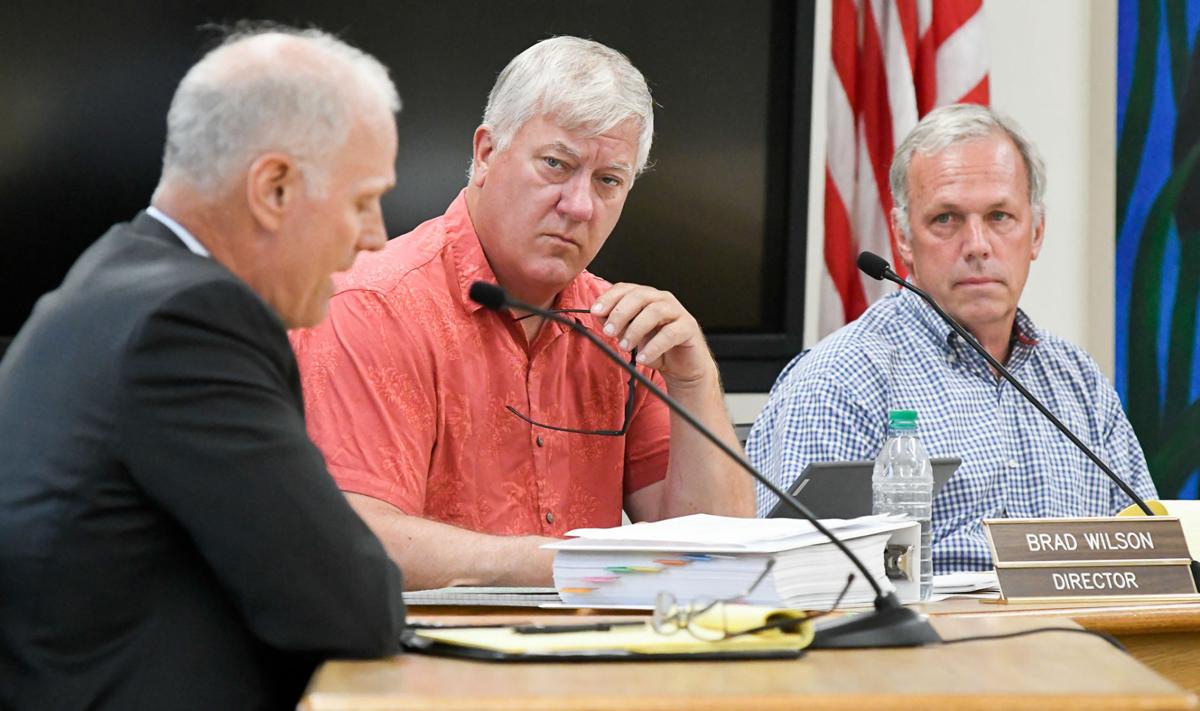 Rob Saxton will become the interim superintendent for Greater Albany Public Schools for up to a year, the Albany school board decided in a special meeting Monday.

Board members voted 4-1, with Michael Thomson dissenting, to extend the interim offer to Saxton, effective immediately, for 190 contract days at a base salary of $150,000.

Saxton will be out of state for much of August but said he would delegate instructions to staff and would be back for all-staff inservice in September.

Saxton answered questions from board members and written questions from the community for a little more than an hour during Monday's meeting. Among other things, he said he would not support the planned change to class schedules this fall at South Albany and West Albany high schools.

Saxton said he had experience with a variety of class schedules and had worked hard while a principal in McMinnville to institute a block schedule at the high school. However, research indicates a schedule — whatever it might be — isn't a key factor in affecting learning outcomes, he said.

Saxton said he feels it's important to reduce upheaval at Albany's two high schools by keeping schedules the same this coming fall as they had been pre-pandemic. If that needs to change to a common schedule, he said he'd first need to be convinced there's a "significant equity reason" to do that, and second, that families would take advantage of the opportunity to to move between the two schools. He'd also want to spend time coming to agreement with staff and families first.

"I think that there could be some small changes in schedule times in hopes that we would allow kids to be able to move back and forth," he said. "We might think about busing in a little bit different way. But the schedule in general, I would like to see go back to the schedules that they were last year."

The district received 103 written comments in advance of Wednesday's meeting, most in favor of hiring Saxton and many with questions about how he would handle issues of equity.

Saxton said the key to equity is to be additive rather than taking anything away. "I think there's a great fear that there's going to be this take-away," he said, adding, "I also believe that when all kids have equal opportunity to be their very best and that we deliver in that way, there's a growth that comes from that that you can't experience unless you're meeting the needs of every child."

He likened it to his family's experience with providing braces for their two children, saying he didn't seek to spend identical dollars for identical treatment, but worked to make sure each had what was required to be healthy.

"I was going to give them what they needed in order to be successful around having straight teeth," he said. "I spent the money where it was needed in order to cause that to happen. And I think that's true within a school district as well."

Reading a submitted question from a resident, Thomson asked whether rising infection rates would prompt Saxton to recommend a mask requirement this fall for elementary students, who can't yet be vaccinated against the COVID-19 virus.

Saxton said he's also worried about the highly infectious Delta variant and said it would be important to listen to the recommendation of experts.

Saxton acknowledged the current conflict in the school district about the need for an interim superintendent and the expedited process to choose one, prompted by the July 14 dismissal of Superintendent Melissa Goff, which has led to protests and demands for a public explanation. He pledged to spend time in schools and in the community to create relationships and build communication.

"I know that people in the community care about kids and they want this school system to be great," he said. "And we need to give them the kind of demonstration that says that they have a reason to have a relationship with us based in trust, care and quality."

Thomson acknowledged Saxton's credentials and his quality as a candidate, but said he objects to the accelerated process. He also questioned extending an offer to a candidate who will be available to work only a few days in August.

However, other directors said they felt Saxton's qualifications made him the ideal person to take the reins in Albany and were willing to wait for him to do so.

"I really feel like we need his leadership for the interim," Director Brad Wilson said. "I know that he will leave great instructions and will get his people in the correct direction, and I do feel we should move forward with offering him the position."

Saxton spent 10 years total as a high school math teacher and football, track and wrestling coach in Albany, serving first at West Albany and then at South Albany. He then also was an assistant principal at West before becoming a high school principal in McMinnville.

At a raucous special meeting Wednesday, Albany School Board voted 3-1 to terminate Superintendent Melissa Goff’s contract as of July 24 under …

PENDLETON — More than half of all patients hospitalized Tuesday at CHI St. Anthony hospital in Pendleton tested positive for COVID-19, accordi…

GAPS board: Quarantine rules will vary by location

How long will you need to be in quarantine, as an Albany K-12 student, if conditions require your isolation?

ROSE (roz) n. One of the most beautiful of all flowers, a symbol of fragrance and loveliness. Often given as a sign of appreciation.

Community members voice their opinion as GAPS superintendent candidate Rob Saxton was interviewed by the school board of directors on Monday.

GAPS superintendent candidate Rob Saxton shakes hands with GAPS board chairman Pete Morse before he was interviewed by the board of directors on Monday.

Community members hold up signs outside the building while Rob Saxton was interviewed by the Albany school board on Monday.

Community members hold up signs in support of GAPS superintendent candidate Rob Saxton as he was interviewed by the school board of directors.