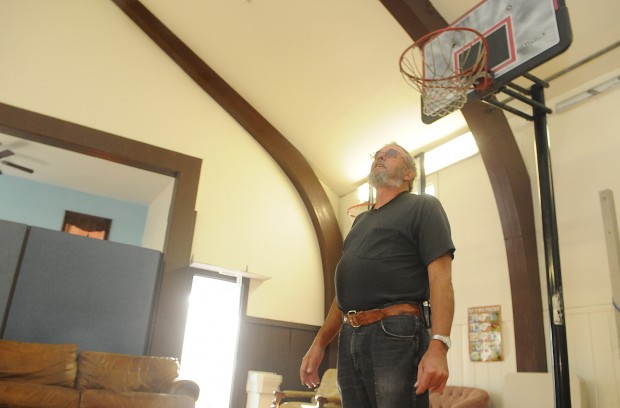 Amateur historian Gary Richards looks at the laminated arches of the relocated Camp Adair chapels that was relocated in Sweet Home after the World War II training facility was dismantled. (Mark Ylen/Democrat-Herald) 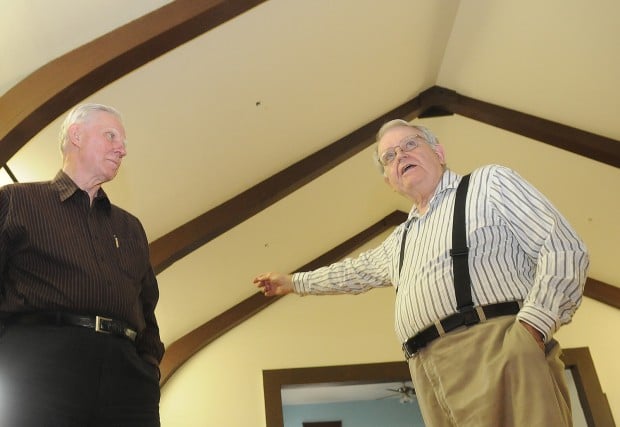 SWEET HOME — Gary Richards’ long quest to track down the lost chapels of Camp Adair came to an end last week with a visit to the Abiding Life Community Church, the former home of Sweet Home’s Mormon congregation.

He had already spoken to some Mormon elders about the building’s history, but he still wanted to see for himself. On Thursday afternoon he met Henry Wolthuis and Bill Lewis for a walk-through of the modest church at 405 Oak Terrace, and any lingering doubts he may have had were dispelled.

“It is the right one,” Richards said, gazing at the distinctive laminated wooden arches supporting the ceiling. “They’ve shortened it up a little bit, changed the windows, but it’s definitely a Camp Adair chapel.”

Camp Adair was a 57,000-acre World War II training installation near the site of present-day Adair Village, about 6 miles north of Corvallis. More than 100,000 GI’s from four Army divisions passed through the camp on their way to wartime postings in North Africa, Western Europe and the Philippines. Before their overseas deployment, many of those soldiers said a prayer in one of the camp’s 11 military chapels.

Richards, 71, grew up in Suver, a crossroads community on the northern edge of the sprawling Army base. By the time his family arrived in 1947, many of the camp’s 1,800 buildings had already been dismantled and sold for scrap.

But not the chapels: Marked out for special treatment, all 11 were set aside for religious organizations from around the region for continued use as churches or war memorials.

About two years ago, Richards got interested in the old camp’s history. He was particularly fascinated with the cantonment’s chapels. Where were they now?

He decided to find out.

John H. Baker, the author of a 2003 history of the base titled “Camp Adair,” pointed Richards to a Catholic church in Newport and gave him some leads on several others, which he followed up.

He visited local museums and historical societies and scoured the Internet searching for clues, painstakingly unearthing references to other Camp Adair chapels and confirming them through site visits and examinations of church records.

Using this approach, Richards was eventually able to establish the whereabouts of nine of the missing chapels.

Then, after an article about his search appeared July 8 in the Corvallis Gazette-Times and Albany Democrat-Herald, he was deluged by tips from readers who were convinced their church was one of the remaining two.

Most of those turned out to be false leads — but some were the real deal.

Last month Richards confirmed the location of chapel No. 10: Saint Paul’s Epsicopal Church in Crescent City, Calif., some 275 miles south of the site where it was built.

Chapel No. 11 turned out to be much closer to home.

Wolthuis, 75, a former bishop in the Sweet Home Church of Jesus Christ of Latter Day Saints, recently got in touch with Richards after reading about his project and supplied the missing piece of the puzzle.

According to church records, Wolthuis said, Ivan and Leone Burnett formed a small Mormon congregation in Sweet Home in the early 1940s, hosting services in their home or local union halls. In 1947 or ’48, when surplus buildings at Camp Adair went up for sale, they put together $1,000 to purchase one of the chapels and set about the task of moving it to Sweet Home using their own labor and a borrowed truck.

“With eight male members in the congregation, they bought the building in Camp Adair and tore it down board by board,” Wolthuis said. “They put the pieces in the back of that truck and hauled it over, load by load by load.”

And thus began a new chapter in the building’s history.

Erecting the new church was a major undertaking for the small flock, but after months of work the Sweet Home Church of Jesus Christ of Latter Day Saints had its first permanent building. The new church was formally dedicated in 1949.

Lewis’ parents were among those who helped move and reassamble the church. Now 75, he remembers them talking about how hard it was to get the job done with an all-volunteer work force — and what an improvement the new building was over some of those union halls, where they had to remove the spittoons before holding services.

“They were all pleased,” Lewis said. “This was pretty fancy.”

The congregation grew, and in 1976 the church moved into a brand-new (and much bigger) building in another part of town. Today the old chapel is once again home to a small flock of Christian worshippers, the 30 or so members of the nondenominational Abiding Life Community Church.

“Fortunately, it’s now in good hands and is being put to good use,” Wolthuis said.

Richards plans to put what he’s learned about the chapels of Camp Adair to good use. He’s compiling a book about the base’s history and has already posted much of the information he’s gathered on his website, http://campadair.webs.com. He’s sharing the data with Adair Living History, a nonprofit working to reconnect Adair Village with its historic roots, and reaching out to museums and historical societies in Linn, Benton and Polk counties.

And he’s already fired up about his next project.

He recently learned that one of the relocated Camp Adair chapels, Westside Christian Church in Eugene, is a memorial to Lt. Col. Gerald R. Johnson, a fighter pilot who was one of the most decorated aces of World War II but is largely forgotten today.

He wants to document Johnson’s military career and remind the public of the sacrifices American servicemen like him made in the war.

“He was quite a hero, that guy,” Richards said.

The chapels of Camp Adair

Built during World War II to serve GIs training for combat, Camp Adair’s 11 military chapels were parceled out to various congregations when the camp was dismantled after the war. Amateur historian Gary Richards has now traced them all to their new homes:

For more details on the rediscovered chapels, see Gary Richards’ website at http://campadair.webs.com.

The Corvallis City Council moved closer to approving one of the largest developments in the city in at least a decade.

After the developers left, the property behind Lee and Sue Cutsforth's home on Northwest Ridders Lane was bare and bleak, scraped down to a ho…

Amateur historian Gary Richards looks at the laminated arches of the relocated Camp Adair chapels that was relocated in Sweet Home after the World War II training facility was dismantled. (Mark Ylen/Democrat-Herald)