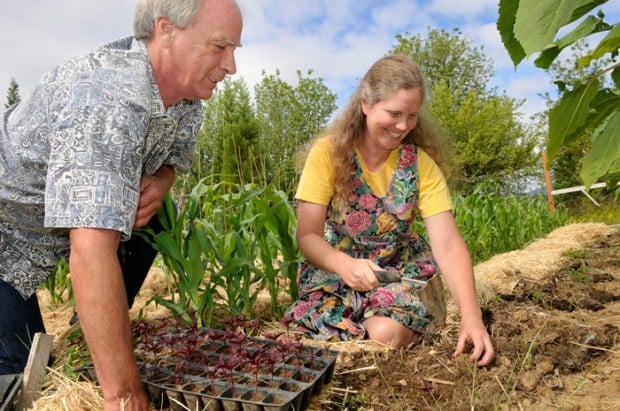 Chris Burns and his wife, Llyn Peabody, plant amarynth between rows of popcorn and sunflowers in the sharing garden they created in Alpine. (Scobel Wiggins/ Gazette-Times) 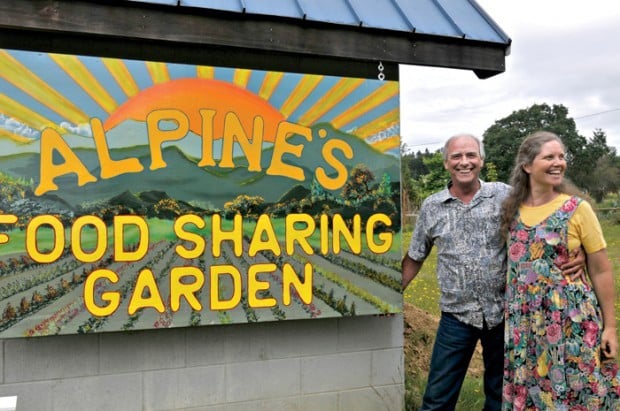 ALPINE — Community gardens have cropped up all over the place in recent years, allowing frustrated city dwellers to lease little patches of real estate where they can cultivate their green thumbs.

In rural south Benton County, they do things a little differently.

“We prefer to call it a sharing garden rather than a community garden,” explained Llyn Peabody, who started the Alpine Sharing Garden in April 2009 with her husband, Chris Burns, and some of their neighbors in this Coast Range crossroads town.

They also call their 80-by-100-foot plot of land in community-owned Chapel Park a “stone soup”garden, after the folk tale about a traveler who cooks a hearty meal out of donated ingredients.

“Somebody might have some old tools they can bring or a tractor to do some tilling,” Peabody said. “Everybody puts something into the soup.”

The total operating budget for the first year was $1,300, with funds contributed by the Elks Club, the Corvallis Organic Gardening Club and other groups and individuals. The fencing material was donated, as were seed and vegetable starts and the labor to till the ground and plant the crops.

Once people in the Alpine area heard about the project, Burns said, they were deluged with offers of help.

Despite an unusually wet and cool spring, the garden has already produced an abundant harvest of early-season veggies this year, including broccoli, savoy cabbage, rainbow chard, kale, snap peas and iceberg lettuce.

Other crops growing now for later harvest include tomatoes, potatoes, beets, basil, chili peppers, pole beans, sunflowers, pickling cucumbers and buttercup squash. The garden is all organic, and many of the plants are heirloom varieties. After harvest, some plants are allowed to bolt, producing seeds to be saved for next year.

This spring the couple expanded their idea to Monroe, where they launched a second sharing garden on donated land.

All the food is shared among the volunteers who contribute to the garden and its upkeep, as well as local people in need. No one is asked to pay for food, and any surplus is donated to the South Benton Food Bank.

“It’s terrific to get fresh proiduce because so much of what we get is canned or frozen,” said Mike Gibson of Linn Benton Food Share, which coordinates the network of emergency food pantires in Linn and Benton counties.

“And it’s expensive to go to the store and buy that stuff. As a result, low-income people typically don’t get a lot of fresh produce.”

The need for food assistance has spiked since the recession began, Gibson said, with the number of people coming to mid-valley food banks up 16 percent over the last two years. The South Benton Food Bank currently serves an average of 130-140 families a week, up from 120-125 last year.

The sharing gardens, Burns and Peabody believe, can help in two ways — by donating surplus produce to folks in need, and by helping people learn to grow some of their own food.

“It’s tough to know where we’re going with the economy,” Burns said. “We need to build some self-reliance.”

Burns and Peabody have a blog, www.AlpineGarden.blogspot.com, where they post news about the gardens and offer tips on organic gardening. Their latest project is trying to organize a community canning operation to help people preserve food for long-term storage.

“This is really our passion,” Peabody said. “Ultimately, we’d like to attract a benefactor to set up a permanent center, like a school, for organic share gardening.

“It’s kind of the Johnny Appleseed thing,” she added with a laugh. “(We want to) get these things started all over Oregon — and then the world!”

The Garden Next Door

Chris Burns and his wife, Llyn Peabody, plant amarynth between rows of popcorn and sunflowers in the sharing garden they created in Alpine. (Scobel Wiggins/ Gazette-Times)

Chris Burns painted the sign for the sharing garden he tends with his wife, Llyn Peabody. (Scobel Wiggins/ Gazette-Times)
© Copyright 2022 Gazette-Times, 1835 NW Circle Blvd Corvallis, OR 97330 | Terms of Use | Privacy Policy | Do Not Sell My Info | Cookie Preferences
Powered by BLOX Content Management System from TownNews.com.
You don't have any notifications.