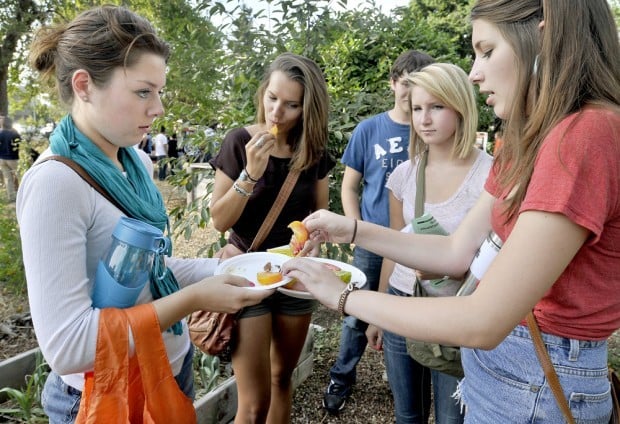 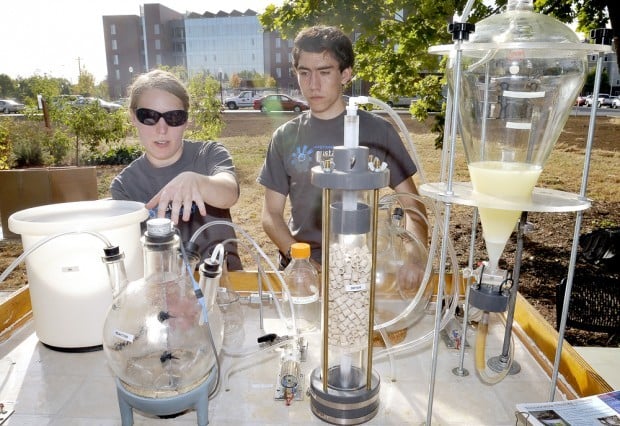 As he stood behind the “make-your-own-salsa” table at the Oregon State University Sustainability Festival on Wednesday, Keir Thomas encouraged those who stopped by to pick exactly what they wanted in their custom-assembled salsa.

Thomas held out plates brimming with rare and unusual organic tomatoes, many of them raised at the sustainability center’s garden. They had names like Zebra and Rainbow.

Those tempted by the bright color and aroma of the fresh fruit could add as much cilantro and jalapeno as they wanted to round out their specialty salsa dip.

“I feel like a lot of food is already prepared for people. Here,” Thomas said as he motioned toward the table, “it’s all about choice.”

Choice was a major theme of Wednesday’s festival at the Student Sustainability Center at Southwest 15th Street and Western Boulevard. Organizers from OSU’s Student Sustainability Initiative aimed to show both new and returning students the “green” options in food, transportation and energy available to them on and off campus and even get them interested in becoming involved.

Other attractions at the third-annual festival included live music, tours of the sustainability center and informational booths from 13 campus organizations, ranging from the Sustainable Energy Initiative with its biodiesel demonstration to the OSU Organic Growers Club, and five community organizations and businesses.

The event was among those held during OSU’s Connect Week of orientation activities. Many who attended were first-year students.

Freshman Maddie Griggs, who plans to study pre-apparel design, stopped by the festival with three friends to learn more about the campus and Corvallis in general.

“I don’t know what’s past the campus yet,” she admitted.

The group stopped by Thomas’ table to sample the exotic tomatoes. They also signed up to be on the email list for several student organizations.

Brian Laird, co-director of the Student Sustainability Initiative, said the festival is a great way for his organization and other student programs to get new members on board, and the effort appears to be successful. Laird estimated the festival drew about 100 to 150 more people than it did last year.