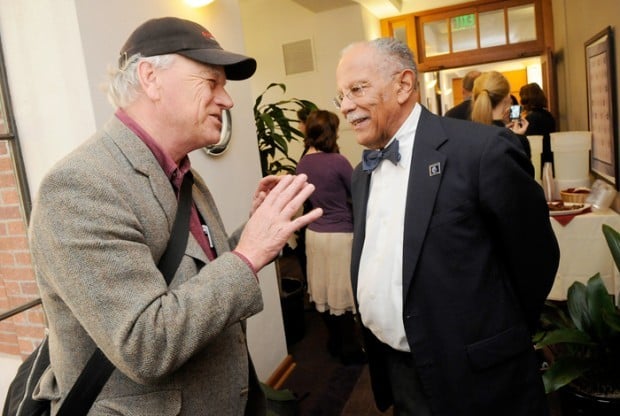 Corvallis weather hobbyist Michael Trager, left, talks with Warren Washington Wednesday morning during a reception at Oregon State University. Washington works at the National Center for Atmospheric research and is know for his work with in climate modeling. Later this month Washington will receive the National Medal of Science from President Obama. (Andy Cripe/Gazette-Times) 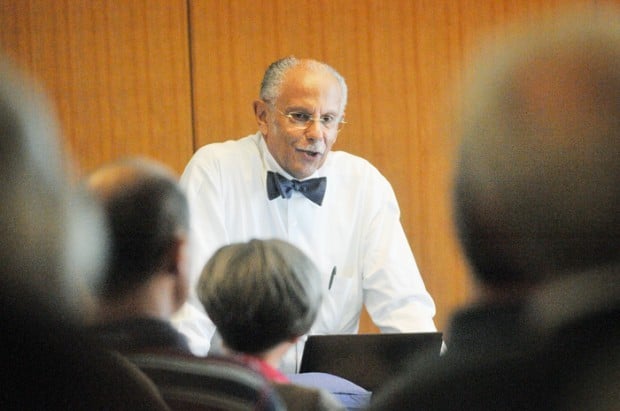 Last Friday, Oregon State University alum and leading climate researcher Warren Washington was announced as one of 10 scientists to receive the prestigious National Medal of Science.

Sporting a bow-tie and a pin on his lapel that said “Warming in Unequivocal,” Washington returned to his alma mater to gave a speech to a packed room of about 85 people Wednesday.

The burning of fossil fuels, especially by large industrialized countries such as China (which exceeded United States emissions in 2009) and the U.S. are a key cause of climate change, he said.

During his talk, he shared a partial list of claims by people who don’t believe that climate change is caused by humans or harmful. And, while he acknowledged the important role of skeptics in scientific research, he said that skepticism for the sake of skepticism is not useful.

“Natural variations do not explain the observed climate change,” he said. “Please do not listen to what Rush Limbaugh and Glen Beck say, because they are wrong with their information about climate change.”

Washington works at the National Center for Atmospheric Research and lives in Boulder, Colo. He has acted as an advisor on climate change to the last six U.S. presidents. He’s also a two-term chairman of the National Science Board.

Washington’s speech was part of the Memorial Union Program Council’s lecture series on diversity, and was entitled: “Advising U.S. Presidents and Inspiring Underepresented Populations: My Journey Through Climate Change and its Environmental Impact.”

Corvallis Mayor Charlie Tomlinson gave the introduction for Washington and his wife Mary.

“We’re so happy you’re here today, you bring us great honor,” he said, before proclaiming Tuesday “Warren Washington Day” in the City of Corvallis.

Washington was born in 1936 in Portland and attended Jefferson High School. He earned his undergraduate degree in physics and a masters degree in meteorology at Oregon State University in 1958 and 1960.

Wednesday, Washington shared a few quick stories about his time at OSU, including a frightening episode on top of Marys Peak manning the weather station as a young researcher. During a sudden snowstorm that dumped several feet of new snow in one night, the defense radar tower toppled and just missed the little shack where he was staying.

Washington later earned a Ph.D. in meteorology from Pennsylvania State University — only the second African American to earn a doctorate degree in that field.

He is known for his work with the Parallel Climate Model and Community Earth System Model. Both models were used extensively in the 2007 Intergovernmental Panel on Climate Change assessment, for which he and colleagues around the world shared the 2007 Nobel Peace Prize.

In 2006, Washington received an honorary doctorate from OSU and also delivered its June commencement address.

“I wouldn’t have gotten where I am today without the excellent education and environment at Oregon State,” he said Wednesday. “I’ll be forever grateful.”

During his presentation, Washington shared a wealth of climate data pointing out global temperature trends and the causes behind climate change.

“Ice sheets are especially important,” Washington said. “If they keep melting at the current rate, we will have to make changes.”

Those changes could involve building massive dike systems around low-lying cities such as New York and Boston, or relocating millions of people, Washington said.

He also talked about the many advances in his field that have allowed scientists to create more realistic models.

“When I started in 1967 the models were simple and computers were primitive,” he said. “Now, virtually every aspect of the climate system model is put in in some detail.”

Washington discussed possible geo-engineering solutions to deal with warming trends such as planting more trees (or stopping deforestation), cloud seeding, putting giant reflectors in space, fertilizing the ocean with iron and pumping CO2 produced by power plants underground instead of releasing it into the air.

However, he said that all these schemes are still in the pilot stage and that the only sound step is to reduce carbon emissions sooner rather than later.

“Politicians don’t always want to take action until every little detail is straightened out. I tell them not to wait. They need to exercise something called the precautionary principle, because things could get worse later on.”

Warren will accept the National Medal of Science from President Obama in a ceremony in Washington, D.C., later this month.

VIDEO: Global climate change from 1870 to 2100 (including human and natural factors -- such as volcanic eruptions)

Corvallis weather hobbyist Michael Trager, left, talks with Warren Washington Wednesday morning during a reception at Oregon State University. Washington works at the National Center for Atmospheric research and is know for his work with in climate modeling. Later this month Washington will receive the National Medal of Science from President Obama. (Andy Cripe/Gazette-Times)