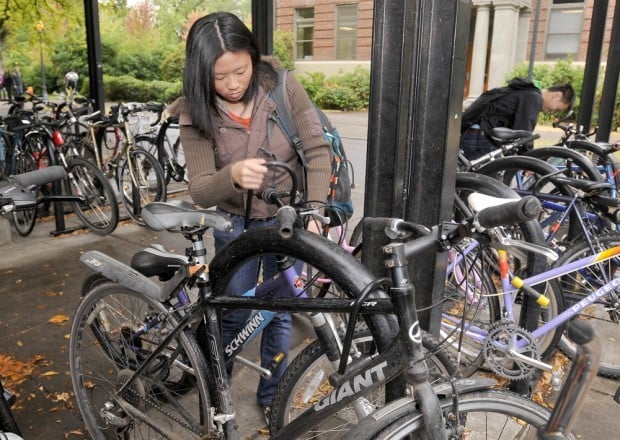 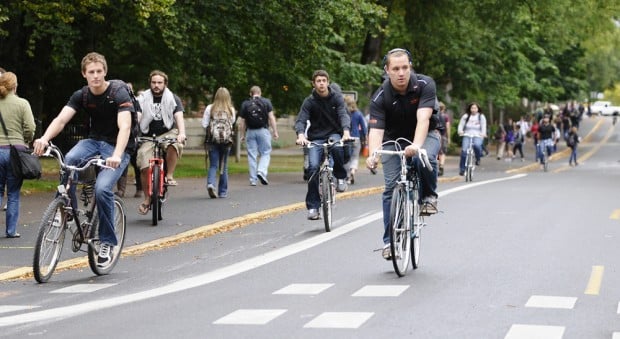 Bicycle riders are a regular fixture in Corvallis - so much so that the city can now boast the largest percentage of bicycle commuters in the United States.

The U.S. Census Bureau announced in a recent release that 9.3 percent of Corvallis residents bike to work, the largest percentage in the nation. The finding was discovered through a American Community Survey conducted in 2009.

The Eugene-Springfield area followed close behind in the Census Bureau's rankings, with 6 percent of workers commuting via bicycle.

These Willamette Valley communities are way ahead of the rest of the country. Nationally, the survey found 0.6 percent of people use a bike to commute to work. The vast majority of respondents - 86.1 percent - commuted in a passenger vehicle, either solo or by carpool.

The release also noted that Corvallis ranked second in the nation in percentage of people walking to work, with 11.2 percent. Ithaca, N.Y., came in first, with 15.1 percent. Corvallis is the only metro area that appeared on both the release's biking and walking lists.

Greg Wilson, the city of Corvallis' transportation program specialist, said the city has done its share to make the biking and walking easy: 97 percent of the city's main roads have bike lanes and about 16 miles of biking trails run throughout the city limits.

"We (also) have very aggressive and

The release noted that all the top cities with walking and biking commuters had populations of 500,000 or less. Many were the home to at least one college or university.

Oregon State University most definitely contributes to Corvallis' ranking; the university says about 40 percent of its employees bike, walk or use some form of nonmotorized transportation to get to work on campus; 47 percent drive a passenger vehicle. The remaining 13 percent either carpool or use public transportation.

The numbers are good, said Brandon Trelstad, OSU's sustainability coordinator. But he added that the university is still doing more to encourage as many employees as possible to use alternative means to get to work.

For example, he said, the campus will create nearly 600 bike parking spots over the next few months, including about five covered bike shelters, a major change.

OSU also plans to make changes to the campus shuttle system and purchase a third WeCar, vehicles that can be rented for short periods of time by Enterprise Rent-a-Car members through an automated system. The university's two cars are stationed on Jefferson Way near Weatherford Hall.

Although the Census Bureau only looked at work commuters, a vast majority of OSU students use alternate forms of transportation: Only about 14 percent drove alone to campus.