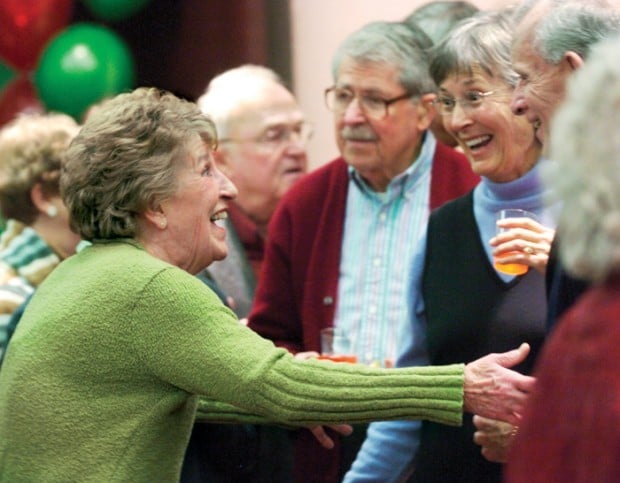 SCOBEL WIGGINS | Gazette-Times Then-Mayor Helen Berg greets Mary Lee and Norm Seward at a reception in her honor at the library on Wednesday, Dec. 20, 2006. "When she talks to you it's like you're the only person in the room," said Mary Lee, who serves on the library board and the flower basket board. 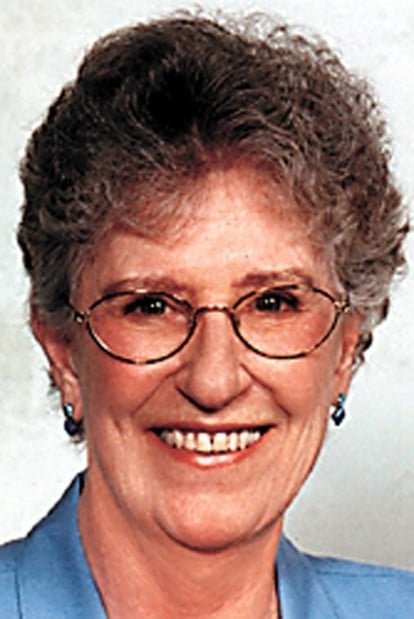 Helen Berg was Corvallis' longest-serving mayor as well as its first woman mayor. 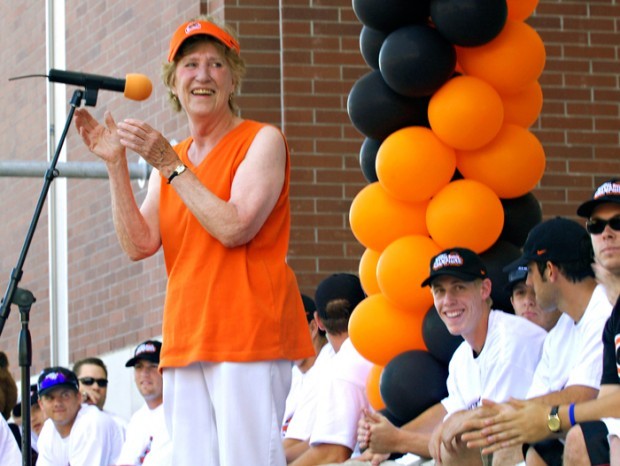 SCOBEL WIGGINS/Gazette-Times Representing the city at the celebration for the national championship OSU Beavers baseball team, then-Mayor Helen Berg, a steadfast fan, tells them "We are proud of you." 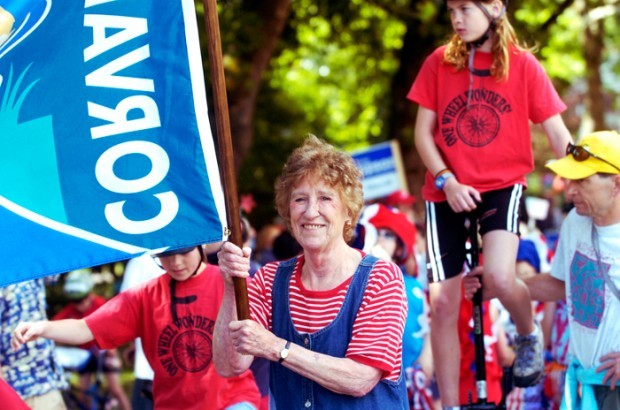 Corvallis' first woman mayor, the first to have been married to a former mayor and its longest-serving mayor died Friday in Portland.

Helen Berg, 78, was a retired Oregon State University statistician who knew both the cost of city government - and how to cut through jargon and red tape to put a human light on the complex issues of politics and governance.

But even when it meant listening to lengthy repetition of the public testimony on contentious matters such as approving the location of a Home Depot in Corvallis - or cutting down trees to make way for riverfront improvements - Berg believed in letting people have their say.

"We are the squeaky wheel capital of the world," she once said, with a note of pride, about Corvallis' attitude toward public participation.

But when Howland Plaza at Riverfront Commemorative Park finally was dedicated in May of 2004, she noted, "We've designed and debated every square foot of it; some of it twice. Now we have a park that everybody likes."

She also believed it was never the wrong time to do the right thing, or too late to begin again.

Berg earned her master's degree in statistics from OSU in 1973, when she was in her 40s. She then became the director of OSU's Survey Research Center in 1975 and worked there until she retired in 1993.

Long active in civic affairs such as the Monroe Avenue improvement project for the strip between campus and downtown, she had a close look at city politics during the public service of her third husband, OSU forestry professor Alan Berg. He served on the City Council from 1973 to 1978 and then two terms as mayor, from 1979 to 1986.

Helen Berg kept his legacy of leadership alive. She sought election to the council and served from 1991 through 1994. In a 1994 article about her decision to seek the mayor's job at the age of 62, Berg said: "I think city government is very important; Good government can really improve people's quality of life."

Former Corvallis Mayor Charles Vars said Monday that he'd known Berg since the late 1970s, when as an OSU economist he turned to her for help with projects.

"Both (she and Alan) served as presidents of the League of Oregon Cities (as well as on the council and as mayors). Nobody was as focused on enhancing community livability for everyone. She worried about doing well, not just in good land-use planning but even more in terms of applying social services to the disadvantaged."

Vars said that he urged Berg to run for mayor - and he was never sorry. (See sidebar, Berg highlights in office).

Mayor Charles Tomlinson, who lost to Berg in the 2002 election, succeeded her after she retired at the end of 2006. He was generous with his praise Monday.

City Manager Jon Nelson, who was hired during Berg's time in office, said Monday that she had the talent for being magnanimous and generous with her public life - but was intensely private about her family and personal life.

Nobody knew whether her health had anything to do with Berg's decision not to seek another term in office as mayor. In a December 2006 interview looking back over her term in office, she declined to discuss her future plans.

But soon after leaving office, Berg also left Corvallis. She moved to Portland in early 2007 to be closer to her family.

The ailment that claimed her life - mesothelioma - is a rare cancer of the lining that covers the body's internal organs. It is most often associated with exposure during someone's lifetime to asbestos. But it can lie dormant and and flare up years after that initial exposure.

Nelson said that Berg's son called to inform him Friday and gave an OK to release the news to the public. However, details of all funeral arrangements are private.

City officials are now considering a public memorial service to be given in Berg's honor, with details to be released as they become available.

Quips and quotes from Berg

Helen Berg's quick wit and self-depracating humor made her intensely quotable during what were often otherwise dry political proceedings. Here are some of Berg's best on-the-record comments:

• At a joint meeting of the City Council and Benton County Board of Commissioners:

"This is Corvallis and Benton County. We don't do anything without a complete public process."

• After testimony that young drivers are a danger in neighborhoods surrounding Corvallis High School:

"As a senior citizen, I'm glad to hear it is only young people and students who are inattentive drivers."

• Responding to a magazine ranking of Corvallis as one of the top stress-free cities in the U.S.:

"In their assessment of stress level, of course, they didn't come into this room."

• Quoting a young statistician who once told her that he never understood the unemployment rate:

• After hearing a report on the Downtown Strategic Plan, including discussion of two downtown movie houses:

"How can we go wrong with a downtown with a Whiteside and a Darkside?"

• Describing a scene of a mother pushing a baby in a jogging stroller and walking a dog:

"Sidewalks are really important to pull something like that off."

• After the city manager pointed out the agenda item she was about to introduce was scheduled for a later meeting:

"You have to watch me every minute."

Highlights from Berg's time as mayor

In addition to the Riverfront Park project, Helen Berg considered these the highlights of her 12 years in office when she looked back on her service in December 2006:

• The Corvallis Police Department's accreditation by the Commission on Accreditation for Law Enforcement Agencies. At the time, only 2 percent of law enforcement agencies nationally - and only five agencies in Oregon - shared that distinction.

• The construction of four new fire stations, cutting emergency response time in some parts of town and keeping the city's fire insurance rating a Class 2. That put Corvallis among the top 1.5 percent of fire districts nationwide and keeps insurance rates down for local homeowners.

• Completion of the combined sewer overflow remediation project, a $30 million undertaking that was the largest public works project in Corvallis history. Now the city no longer dumps sewage and stormwater into the Willamette River during heavy rains and treats all municipal wastewater.

• Completion of the Corvallis 2020 Vision Statement, updating the city's comprehensive plan and land development code, adoption of a downtown strategic plan and economic development plan and completion of a natural features inventory.

his isn't everything you should know about Helen Berg, but it's a place to start:

SCOBEL WIGGINS | Gazette-Times Then-Mayor Helen Berg greets Mary Lee and Norm Seward at a reception in her honor at the library on Wednesday, Dec. 20, 2006. "When she talks to you it's like you're the only person in the room," said Mary Lee, who serves on the library board and the flower basket board.

Helen Berg was Corvallis' longest-serving mayor as well as its first woman mayor.

SCOBEL WIGGINS/Gazette-Times Representing the city at the celebration for the national championship OSU Beavers baseball team, then-Mayor Helen Berg, a steadfast fan, tells them "We are proud of you."

SCOBEL WIGGINS/Gazette-Times Mayor Helen Berg walks the Corvallis flag around the town one last time in an All-American Anyone-Can-Join Fabulous Fantastic 4th of July Parade.
© Copyright 2021 Gazette-Times, 1835 NW Circle Blvd Corvallis, OR | Terms of Use | Privacy Policy
Powered by BLOX Content Management System from TownNews.com.
You don't have any notifications.