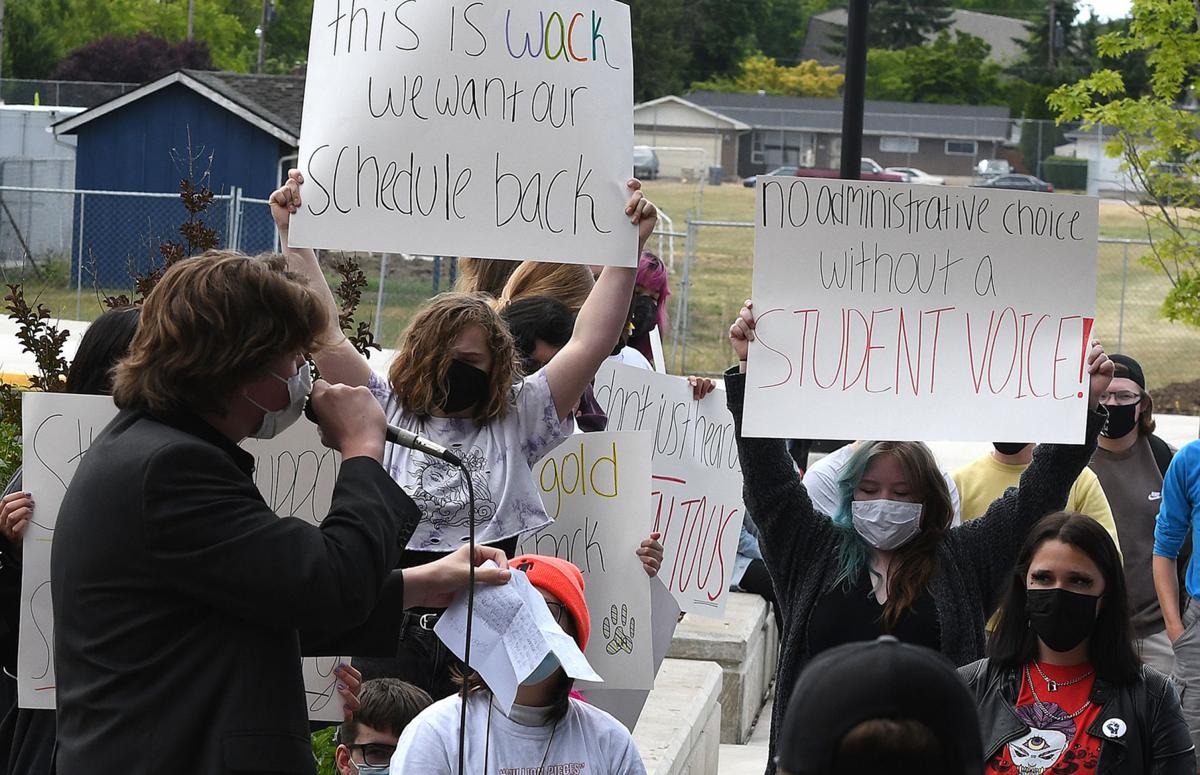 West Albany High School student Andy Craig, at far left, speaks to more than 200 students that walked out of their classes at noon on Tuesday. Students were protesting the district's decision to move from eight periods to seven periods during the school day at West Albany, which will result in the elimination of several courses. 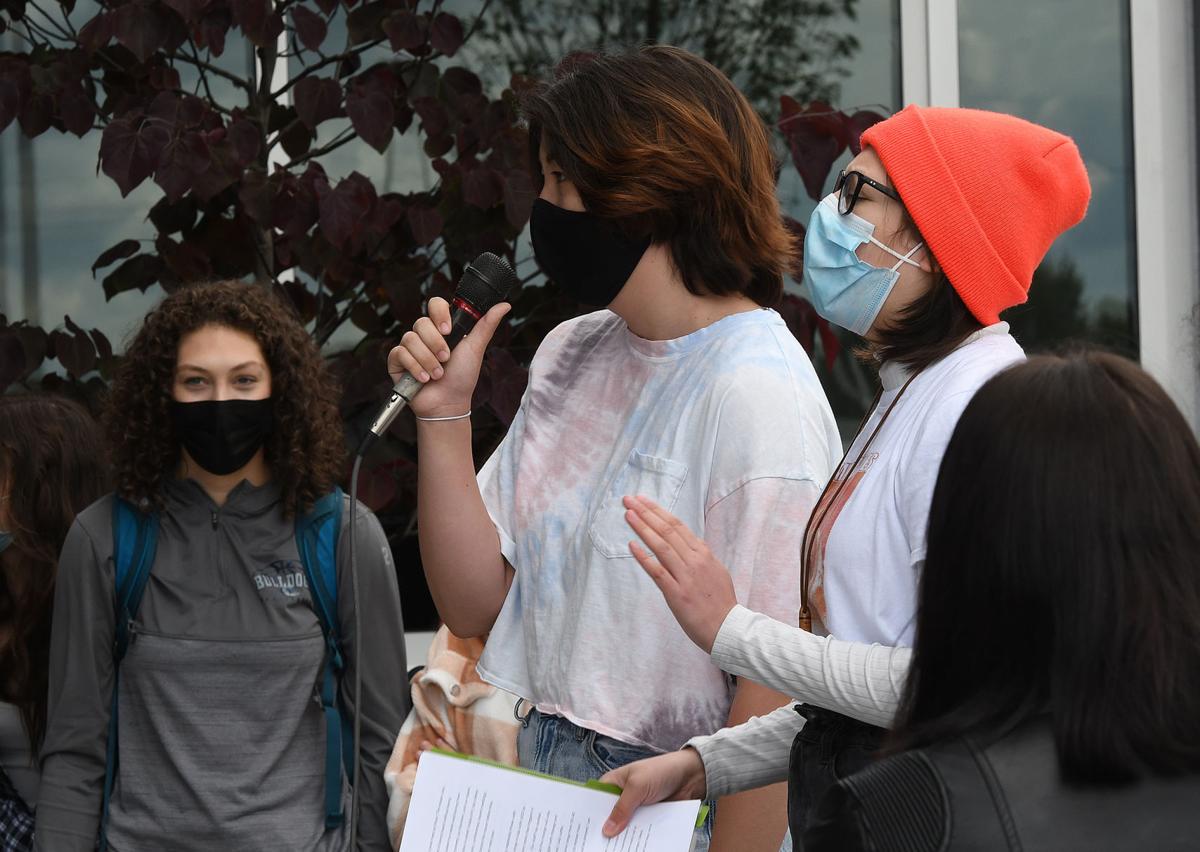 Event organizer Sachi Wrigley opens up the speeches at West Albany's walkout, which lasted about 15 minutes. 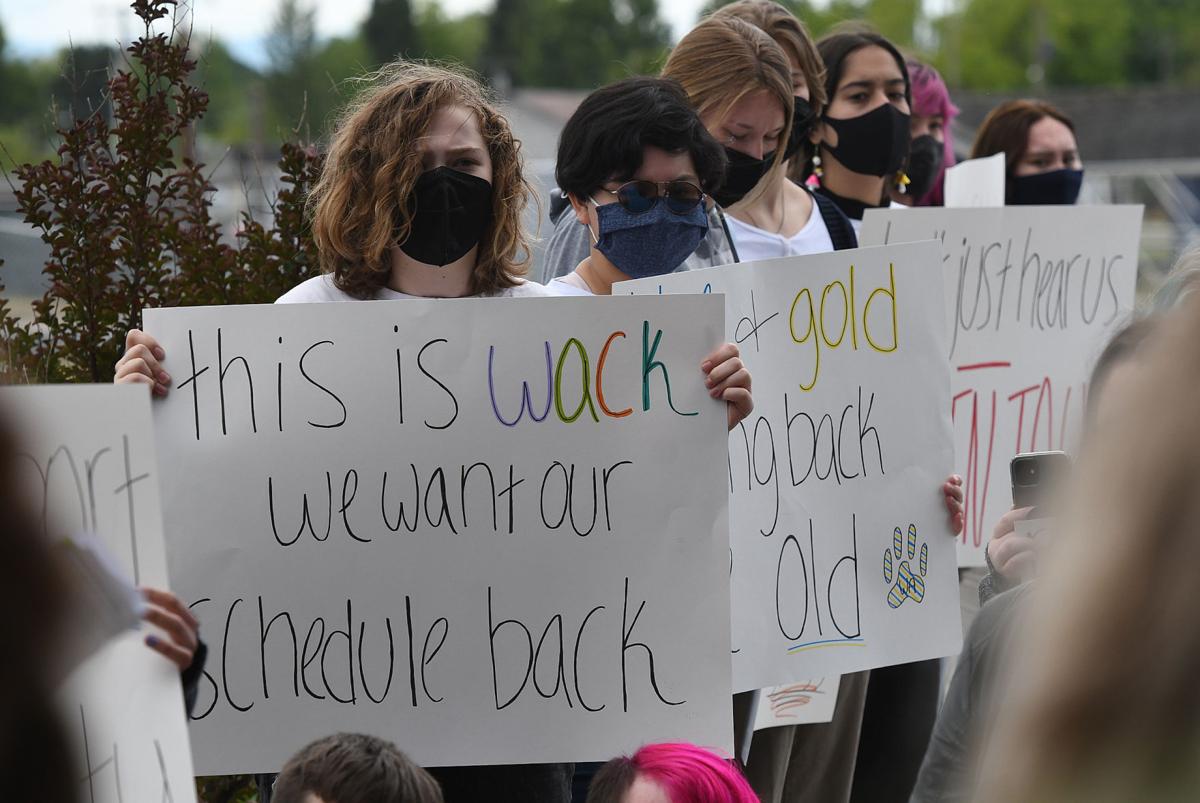 More than 200 West Albany students walked out of their classes at noon on Tuesday to protest a schedule change. 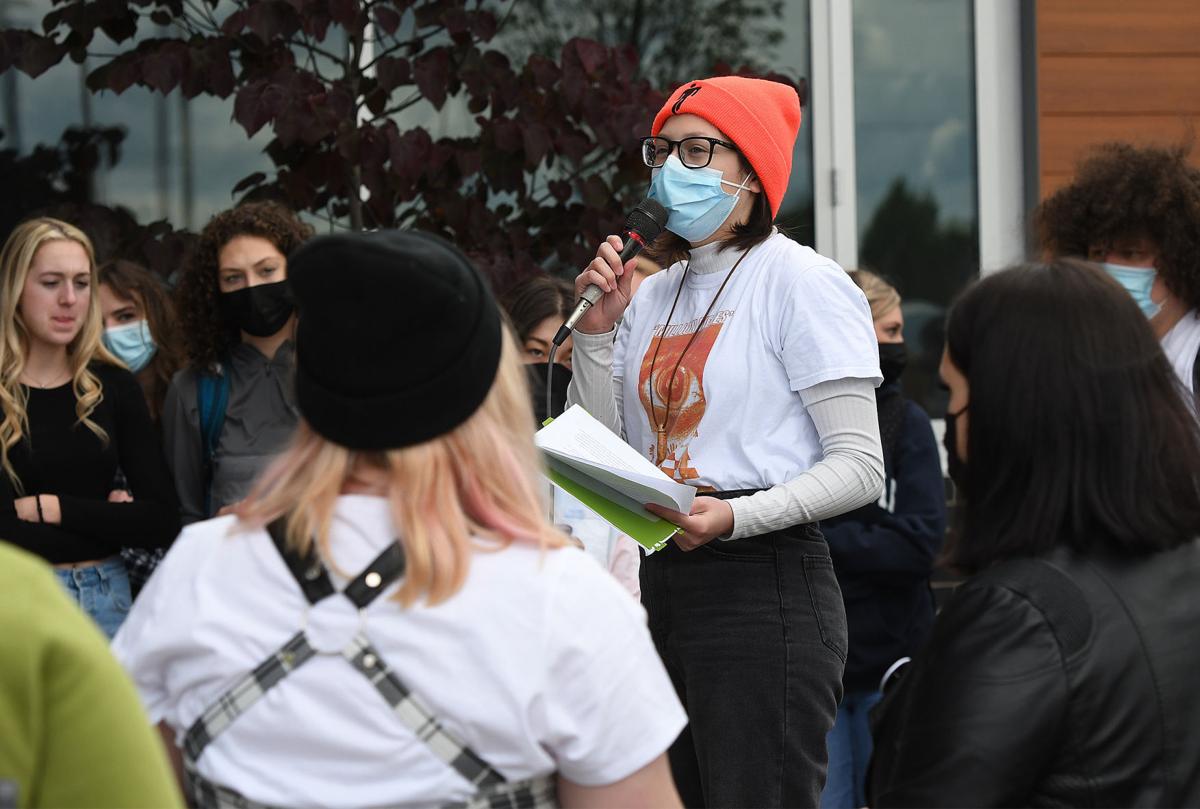 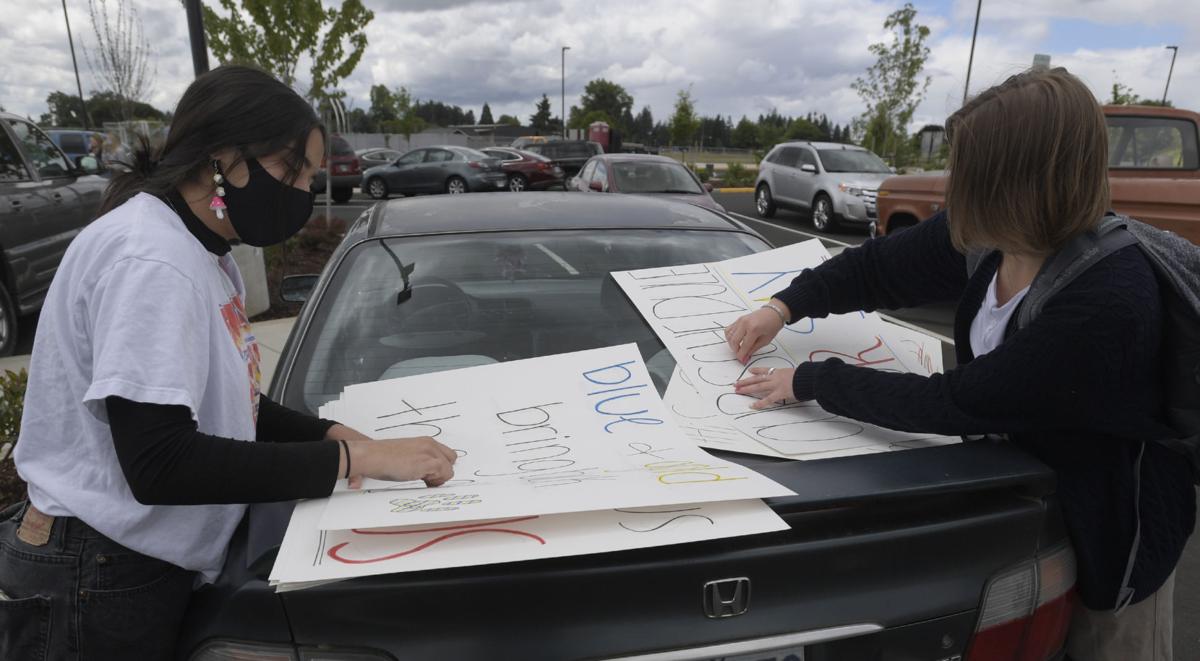 More than 200 students walked out of their eighth period class Tuesday at West Albany High School to protest the Greater Albany Public School district's decision to cut that period of class next year.

The decrease to seven periods will mean a cut in the number of courses offered at West Albany, said event organizer Sachi Wrigley. That number of courses eliminated is currently unknown, Estimates have ranged from 30 on the low end to 70, Wrigley added.

"To our knowledge, West Albany High School is not losing any electives at this time," said Greater Albany Public Schools Superintendent Melissa Goff.

Wrigley said a group of students decided to organize the walk out over the weekend after a petition signed by more than 1,100 people to stop the change was rejected by superintendent Melissa Goff, who said through her spokesman, Andrew Tomsky, that she had no comment on the petition.

The petition requested the school district to put a hold on the change for a year and allow students and parents to be included in the decision making process.

“No student input was taken into consideration in making of this schedule.” said Wrigley, a 17-year-old junior at West Albany.

Currently the school is on a block schedule with four classes of longer duration every other day. The proposed change will give the West Albany students seven classes with a shorter duration each day similar to South Albany’s schedule.

“It really is going to impact us because if we have seven classes instead of eight. We’re not going to be able to graduate with as many credits,” said 16-year-old sophomore Alice Whiteside, as she created protest signs in the West Albany parking lot.

The GAPS website says that the schedule change is the “final piece of the Bond Promise.”  The website also states  “Next year, the schools will be on an interim schedule while they work through a deep community process to decide upon their future permanent shared schedule which will begin in Fall 2022.”

"The interim schedule was one of two proposed by school teams," Goff said.  "We look forward to engaging with the community and students next year around a permanent, common, high school schedule that allows for expanded opportunities for students."

The West Albany students left their classes at noon, gathering in the public area outside the front doors of the high school. Speakers included class presidents who asked for their voices to be heard by the school district.

The protest, which lasted 15 minutes, included a half-dozen students holding makeshift signs and cheers for the speakers. Staff stood around the perimeter watching the gathering but not intervening.

" We appreciate students organizing and using their voice for changes that are important to them," Goff said.  "We make our decisions focusing on our students.  We also recognize the voices of students and staff who have a platform and we recognize those who do not."

Wrigley said their group is exploring creating a door-to-door petition or requesting a hearing in front of the school board.

The GAPS board will have three new members as of July 1.

“I think its great that students are advocating for what they need,” said Roger Nyquist, who was elected to the GAPS school board last month. “I think it’s important that there is buy-in from the community with whatever the schedule is going to be.”

“I’m very interested in hearing what the students have to say,” Nyquist said

For a gallery of photos and a video of speakers at the West Albany walkout, go to our websites.

West Albany senior infielder Presley Jantzi was named the 5A softball player of the year by a vote of the state’s coaches.

Albany school board moves to in-person meetings for members, but not yet for public

Another year added to superintendent's contract

When John Hunter became principal at South Albany High School this past fall, the student leadership had a request for him: Could they all gra…

GAPS board to consider modulars

West Albany High School student Andy Craig, at far left, speaks to more than 200 students that walked out of their classes at noon on Tuesday. Students were protesting the district's decision to move from eight periods to seven periods during the school day at West Albany, which will result in the elimination of several courses.

Event organizer Sachi Wrigley opens up the speeches at West Albany's walkout, which lasted about 15 minutes.

More than 200 West Albany students walked out of their classes at noon on Tuesday to protest a schedule change.