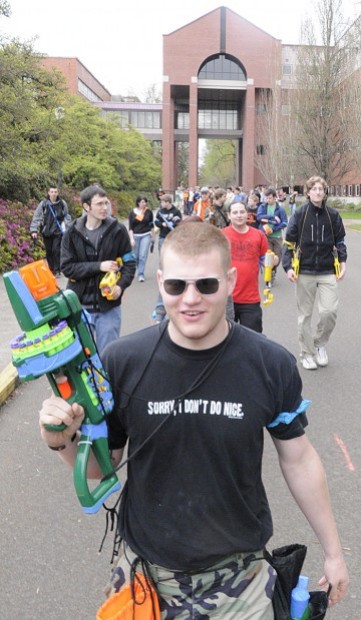 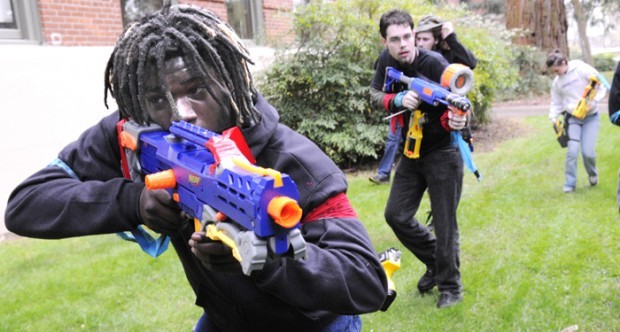 Luke Elbinger and Ryan Schroedel, of Z.R.F Alpha team (Zombie Relief Force) stalk around the Strand Agriculture building on their way to Benton Hall Sunday afternoon on the Oregon State campus. Sadly both Elbinger and Schroedel fell to a zombie ambush during their mission. (Jesse Skoubo/Gazette-Times) 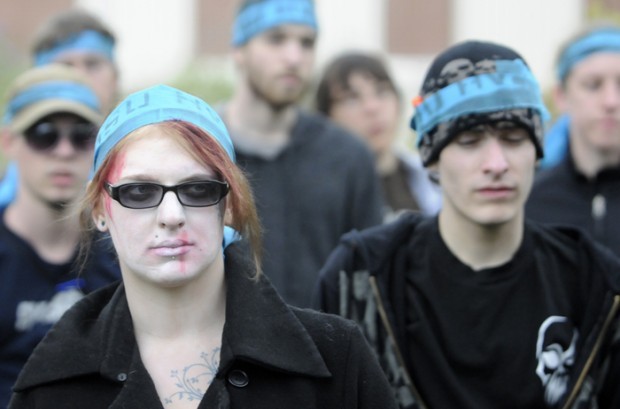 Ava Leighton stands alongside her fellow undead cohorts as she listens to instruction for the next few days Sunday afternoon. (Jesse Skoubo/Gazette-Times) 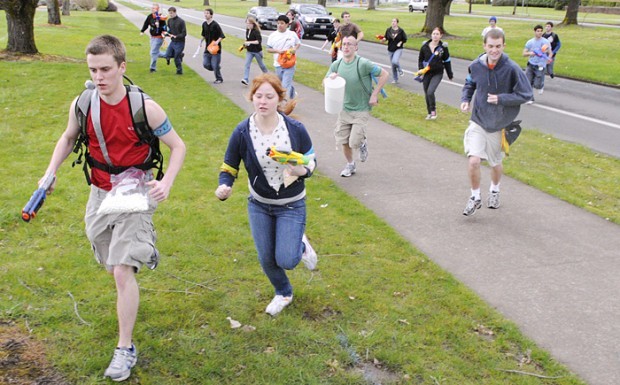 Kyle Thompson and Haley Jones run towards an objective in Peavey Hall Sunday afternoon on the OSU campus. (Jesse Skoubo/Gazette-Times)

Recently, an Oregon State University professor created a form of nano-technology that is able to  connect to human nerve tissue. However, the FDA wouldn’t approve the invention, so the professor — and his two  assistants — used it on themselves.

Now, the campus is under siege by an army of zombies.

If you’re an HVZ player, nothing about that sounds too alarming. In fact, it probably sounds great.

Much like a virus, HVZ, short for “Humans Versus Zombies,” is a college game that has spread rapidly across the country. This week, more than 300 people are playing the game at OSU.

HVZ is sort of a roving game of tag pitting the “human resistance” against the “zombie horde.”

The OSU game began with three “OZs,” or “original zombies,” who started the zombie spread. Humans who are tagged turn into a zombies themselves.

And thus, the zombie ranks grow.

Humans can temporarily ward off a zombie by hitting him with marshmallows, socks or soft foam pellets from a Nerf gun. A zombie must “feed” on a human (tag him) every 48 hours or be eliminated.

The HVZ playing field is essentially all outdoor spaces on campus, but only campus. Stairs are exempt, as is anyone on a bicycle or skateboard.

Sophomore Jeff Bierman is one of the moderators of this week’s game, and also helped put on the first HVZ at OSU, which took place fall term and attracted about 200 people.

The moderators immediately began planning the next HVZ.

Now, students know what they’re seeing and will even point out zombies — who wear bandannas around their heads — to humans.

Before a single zombie was created, the whole game was greenlighted by OSU  and Oregon State Police.

Moderators said they haven’t received any complaints from other students or staff.

“The only thing I’ve heard is that they want to join,” said Matt Wedzita, a freshman moderator.

All guns used must have bright orange tips and are inspected to make sure they  can only shoot soft foam. Weapons must not be visible inside buildings.

Sunday, the humans converged at Cordley Hall to carry out a mission, one of five in this game.  The task was to recover two “supply drops” in zombie territory.

Players are informed of  mission details via email, resulting in a convergence of players in a designated spot.

OSU’s game began Friday and is scheduled to go until Saturday, but the game ends if all humans become zombie.

“Each mission has a ‘what-if’ to every scenario, so we can rig it so that there are humans that survive,” Bierman said.

Freshmen Jessica Wilhelmson, Jessica “Auby” Aubin and Kathryn Kennemer, all horror movie fans, talked about why they love HVZ as they waited for the humans to arrive for battle.

Aubin played in the fall and found it “ridiculously, amazingly fun.”

“It gets your mind off school,” she said. “It kind of brings you back to kindergarten or grade school, playing tag.”

All three were turned into zombies in the first few days of the game, but they said that’s actually a bit of a relief. It’s less stressful to stalk than be stalked.

“It doesn’t matter what side you play on, Wilhelmson said, “it’s always fun.”

But if you are one of the few remaining humans at the end of the game and fear the vulnerability of walking to or from class, protection is available.

The Zombie Relief Force, responds to calls or text messages and sends some of its 30 or so members to escort a player around campus.

Marcus Lopez, a junior, organized the force as a way to keep people alive at the end of the game and make it a bit more challenging for zombies to wait outside a building and pick off people leaving a class.

After all, the thrill of the game is in the unexpected aspects.

“What I like about it is it’s fun, it’s exciting,” Lopez said. “You’re just walking around campus; you never know if there’s going to be a zombie around the next corner.”

Hospitalization rates for COVID-19 climbed sharply in the mid-valley last week as case counts rose across the state, according to newly releas…

Retired Albany judge missing, may be in danger

In the late 1980s, fresh out of what was then Southern Oregon State College, Jonathan Sassaman returned home to Beaverton, where he got a job …

The man arrested for destroying large display windows at a number of downtown Corvallis businesses in May will spend four months in jail.

Oregon has surpassed 10,000 cases of COVID-19, according to information released by the Oregon Health Authority on Sunday.

On Wednesday Oregon recorded its highest daily total of new COVID-19 cases since the pandemic began, and officials pointed to the upward trend…

Luke Elbinger and Ryan Schroedel, of Z.R.F Alpha team (Zombie Relief Force) stalk around the Strand Agriculture building on their way to Benton Hall Sunday afternoon on the Oregon State campus. Sadly both Elbinger and Schroedel fell to a zombie ambush during their mission. (Jesse Skoubo/Gazette-Times)

Ava Leighton stands alongside her fellow undead cohorts as she listens to instruction for the next few days Sunday afternoon. (Jesse Skoubo/Gazette-Times)

Kyle Thompson and Haley Jones run towards an objective in Peavey Hall Sunday afternoon on the OSU campus. (Jesse Skoubo/Gazette-Times)
© Copyright 2020 Gazette-Times, 1835 NW Circle Blvd Corvallis, OR | Terms of Use | Privacy Policy
Powered by BLOX Content Management System from TownNews.com.
You don't have any notifications.