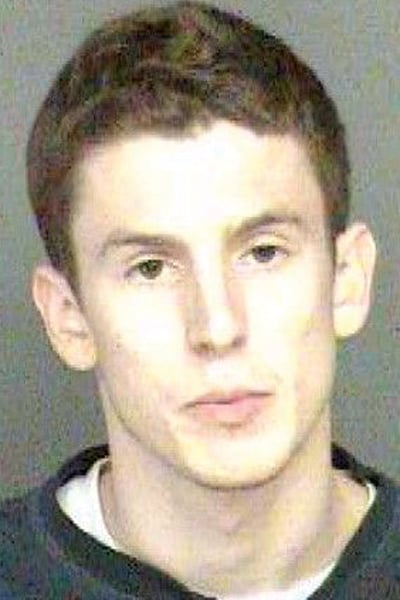 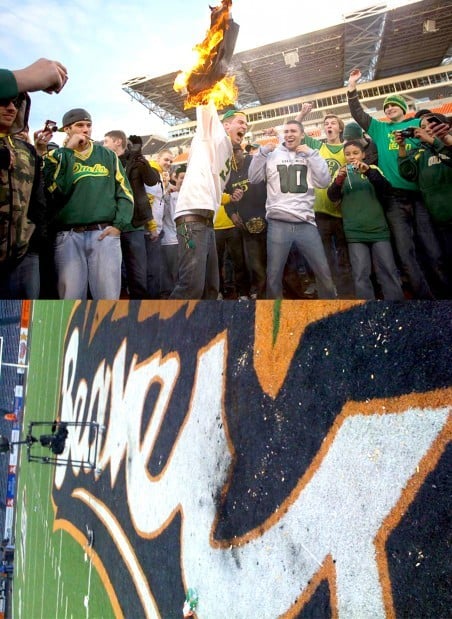 Top: University of Oregon fans celebrate the Ducks' victory over the Beavers in Reser Stadium at the Civil War game in Corvallis Saturday. (Courtesy of the Portland Tribune) Bottom: The charred Beaver logo in Reser Stadium. (OSP)
Gazette-Times

Oregon State Police troopers have arrested a University of Oregon student and still are seeking witnesses in connection with the investigation into damage to the artificial turf at Oregon State University’s Reser Stadium.

Investigating troopers identified a young man in a Portland Tribune photograph who was holding a burning “I hate your ducks” T-shirt in the air, and contacted Joshua David Britton, 20, at about 9:25 p.m. Tuesday at a Eugene-area apartment.

Britton is a junior at UO who comes from Beaverton. He was arrested and transported to the Benton County jail in Corvallis on a felony charge of riot and misdemeanor charges of criminal mischief, disorderly conduct, endangering another person and reckless burning.

He later was released from the jail pending an appearance at 1 p.m. Jan. 6 in Benton County Circuit Court. The charges will be forwarded to the Benton County District Attorney’s Office for consideration of possible prosecution.

OSP received more than 50 tips quickly following a news release Tuesday afternoon of the Portland Tribune photograph. A YouTube video also surfaced that showed a crowd at Reser Stadium — many of them dressed in combinations of yellow and green — standing on the Beavers logo in the center of the field after the Ducks’ 37-20 victory over the Beavers. Some were shouting “Lets go, Ducks!” and “B-C-S!” as the T-shirt was lit on fire. In a cell phone video of the incident posted to YouTube, it’s evident that some in the crowd also were filming the burning of the T-shirt.

Officials estimated the damage to the artificial turf at $1,500. An unidentified person finally stomped out the flames.

People who witnessed (or filmed) the incident are asked to call Senior Trooper Orly Johnson at 541-737-3010.

Top: University of Oregon fans celebrate the Ducks' victory over the Beavers in Reser Stadium at the Civil War game in Corvallis Saturday. (Courtesy of the Portland Tribune) Bottom: The charred Beaver logo in Reser Stadium. (OSP)
© Copyright 2021 Gazette-Times, 1835 NW Circle Blvd Corvallis, OR | Terms of Use | Privacy Policy
Powered by BLOX Content Management System from TownNews.com.
You don't have any notifications.