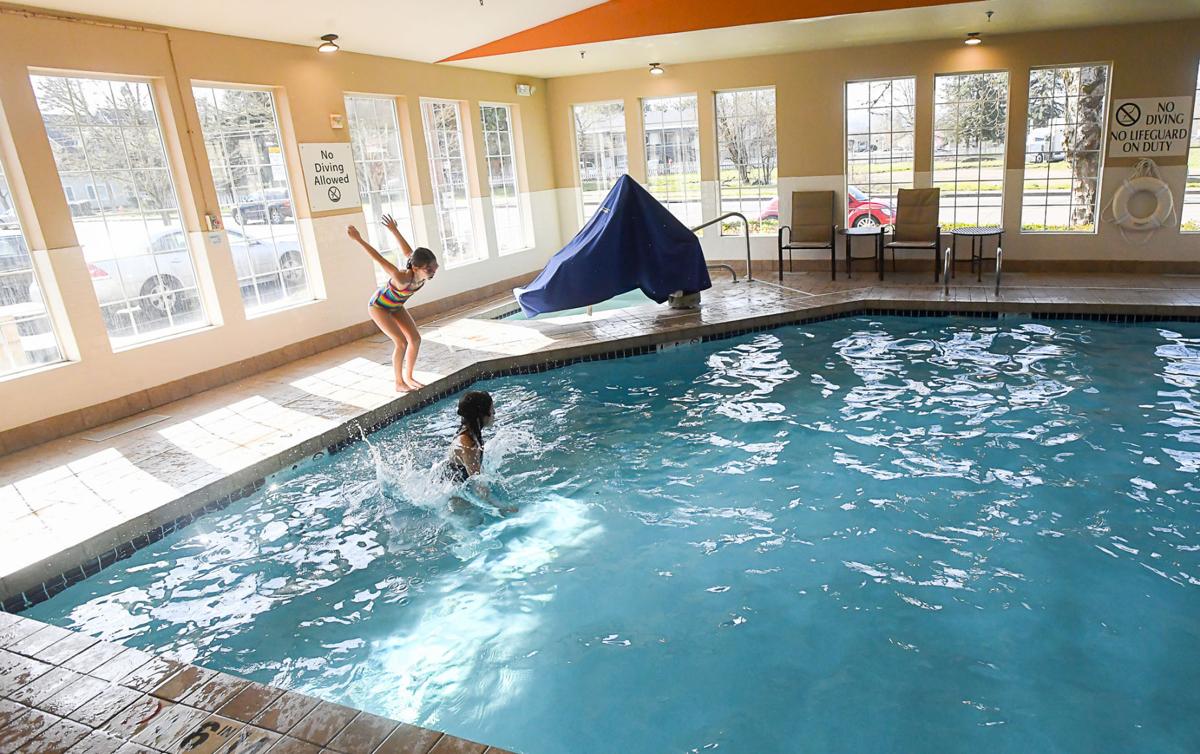 Natalie Schoenhals, 9, left, and her sister Hannah Schoenhals, 8, of Albany play in the pool at the Holiday Inn Express in Corvallis, which is the site of the latest “staycation” package put together through Hospitality Vision. 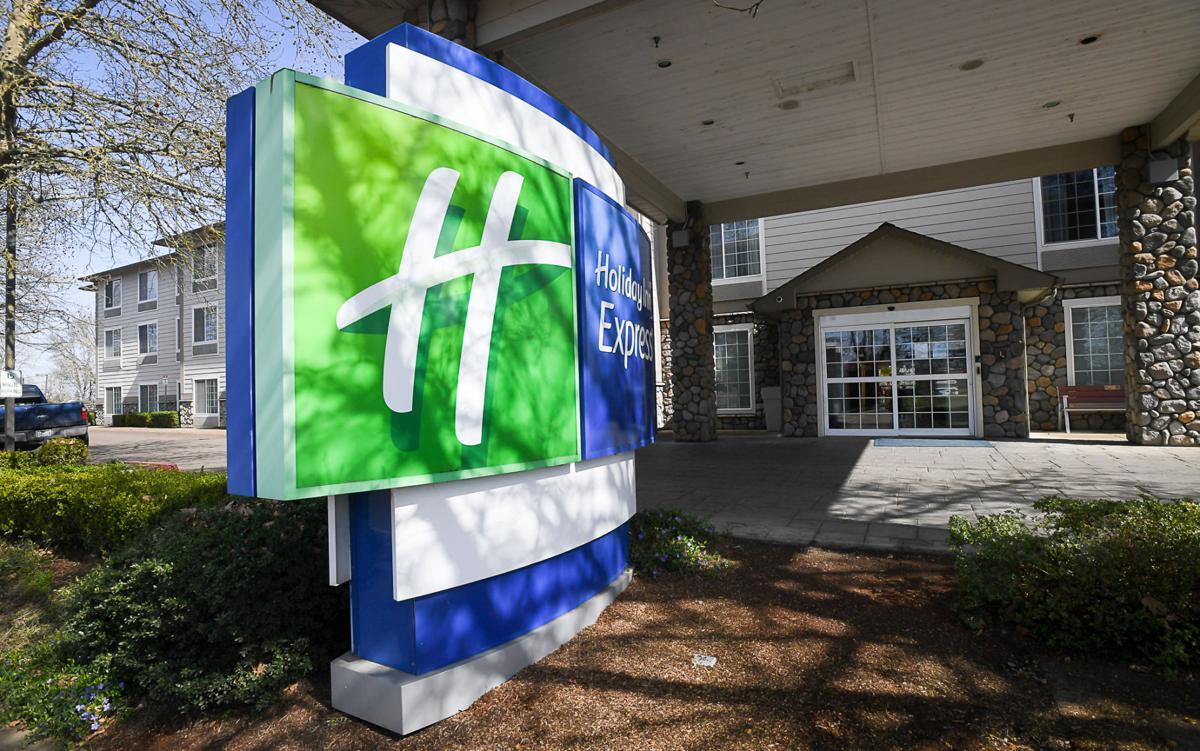 Holiday Inn Express is one of several Corvallis-area hotels that have joined together with other local businesses to generate revenue during the pandemic with "staycation" cross-promotions. 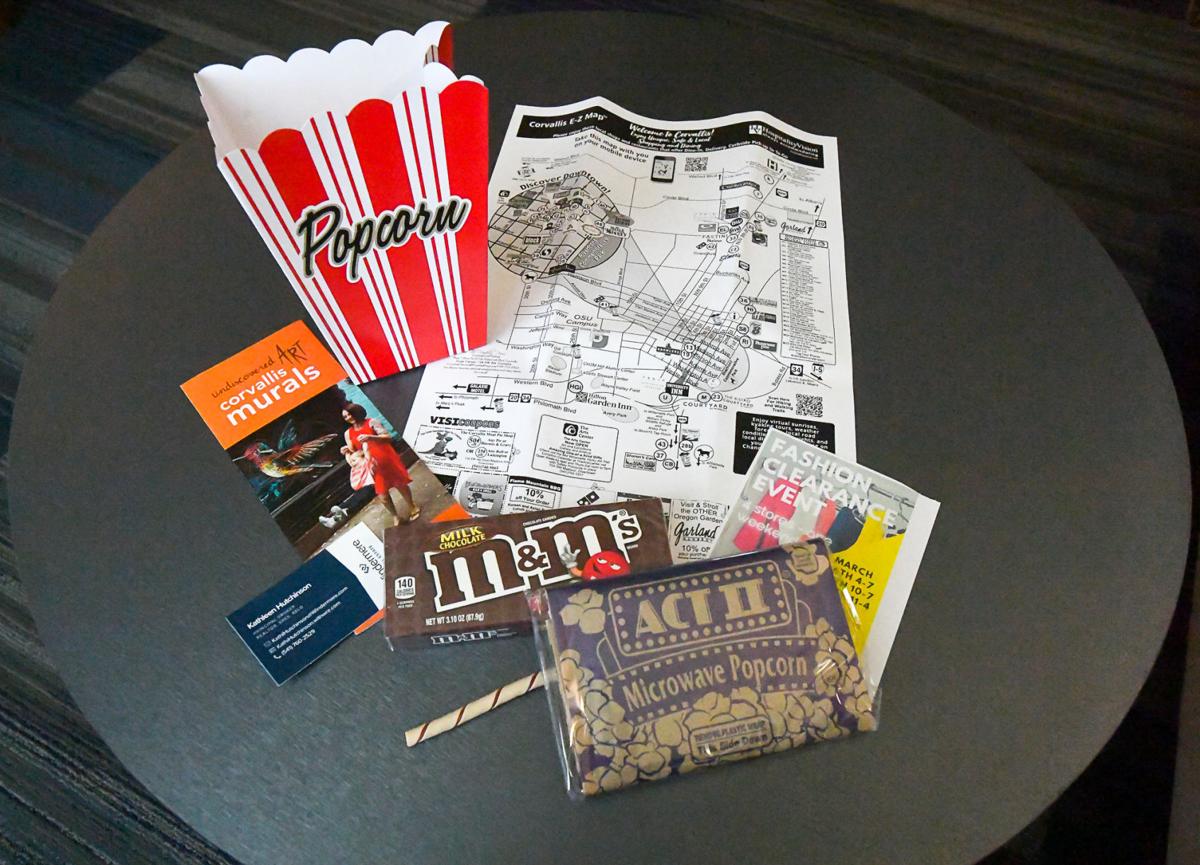 A goodie basket at the Holiday Inn Express includes tourist information and treats to enjoy with an in-room movie.

Corvallis-area businesses are banding together to provide “staycation” packages to local residents who want to experience travel without all the risks of leaving the area during a pandemic. The result is not only fun for Oregon families, it’s a much-needed boost to sectors that were hit hardest by pandemic restrictions.

The staycation packages were orchestrated by Marti Staprans Barlow, who runs Hospitality Vision, a business that coordinates the in-room television broadcasts that display local tourism information for guests in Corvallis hotels and motels.

“People still don’t feel comfortable traveling far because of COVID,” Barlow said. “People want entertainment that doesn’t entail as much personal contact. But everyone still needs to get out of the house.”

These staycation packages offer people the chance to get a safe and tailored experience, with an in-room movie provided over the Hospitality Vision channel during a chosen time for each family. The hotel lobbies also provide kits with free popcorn, candy, maps of the area and details about fun things to do locally.

So far this year, staycation packages have been organized for New Year’s, Valentine’s Day and now Spring Break, all at different local hotels. The Spring Break edition was held at the Holiday Inn Express in Corvallis last week.

Guests at the Holiday Inn got a tourism map of downtown Corvallis, with details on businesses that are open during the pandemic. There was also a brochure detailing the various murals that can be found around Corvallis, providing another entertainment option for families who might want to walk around downtown.

One huge draw of the staycation packages has been the ability to reserve times to swim in the pools, an activity that has been significantly hampered over the past year. A small family was utilizing the pool at the Holiday Inn Express last week.

“It’s nice to do something close to home,” said Elaine Schoenhals of Albany, who was there swimming with her two daughters. “It feels like we’re traveling even though we’re not far from home.”

Of course, the staycations are also a chance for local businesses to generate some revenue during the economic downturn brought on by the COVID-19 pandemic. The hospitality industry was hit especially hard.

“Obviously, we love the positive exposure, but at the same time it brings additional revenues to us when they are most needed in our industry,” said Josh Messer, director of the Courtyard by Marriott, Hilton Garden Inn and the Holiday Inn Express in Corvallis.

The effort to put the staycations together has been a collaboration between several local businesses and groups. Messer, the president of the Downtown Corvallis Association, noted that the effort sprang up in past as a way to support all of the organization’s members.

“It works out perfectly timing-wise for counties’ reopening of restaurants,” he said. “It gives you more of a true staycation, being able to head out and support local restaurants and then come back and watch the movie.”

The staycation packages rotate between a different local hotel each month, often with timely holiday themes. In January, the theme was New Year’s. In February, the staycations were touted as a Valentine’s Day escape for local couples. March’s were for Spring Break, and April’s will most likely be pet-themed.

No matter where it’s been held or what the theme has been, local business owners say it’s translated to increased revenues for hotels and surrounding businesses.

“All the hotels that advertise it and market it are seeing more heads in beds,” said Kathleen Hutchinson with Windermere Real Estate in Corvallis. “The nearby restaurants say they’re also seeing more traffic when those hotels book these packages.”

Sky High Brewing, which participated in one of the previous marketing campaigns for a staycation offered at the Courtyard by Marriott, said that it definitely saw the benefits of partnering with the hotels.

“They’ve promoted our business, which has helped, and we’ve kind of helped them make their staycations more fun,” said Heidi Lewis, marketing director at Sky High.

As much as the pandemic has hurt small businesses, Lewis says that these partnerships are proof of how local business owners have banded together to stay afloat.

“Businesses typically tend to just operate on their own,” she said. “And, in this climate, it’s been really great to sort of come together and almost thrive.”

How to get a vaccine in Linn and Benton counties

With Oregon’s vaccine inventory slowly ramping up, counties will be seeing an even higher volume of doses in the coming weeks. In fact, both L…

Juanita Eggers was still in high school when the Japanese bombed the United States naval yard at Pearl Harbor, Hawaii. Her aunt and uncle were…

Natalie Schoenhals, 9, left, and her sister Hannah Schoenhals, 8, of Albany play in the pool at the Holiday Inn Express in Corvallis, which is the site of the latest “staycation” package put together through Hospitality Vision.

Holiday Inn Express is one of several Corvallis-area hotels that have joined together with other local businesses to generate revenue during the pandemic with "staycation" cross-promotions.

A goodie basket at the Holiday Inn Express includes tourist information and treats to enjoy with an in-room movie.