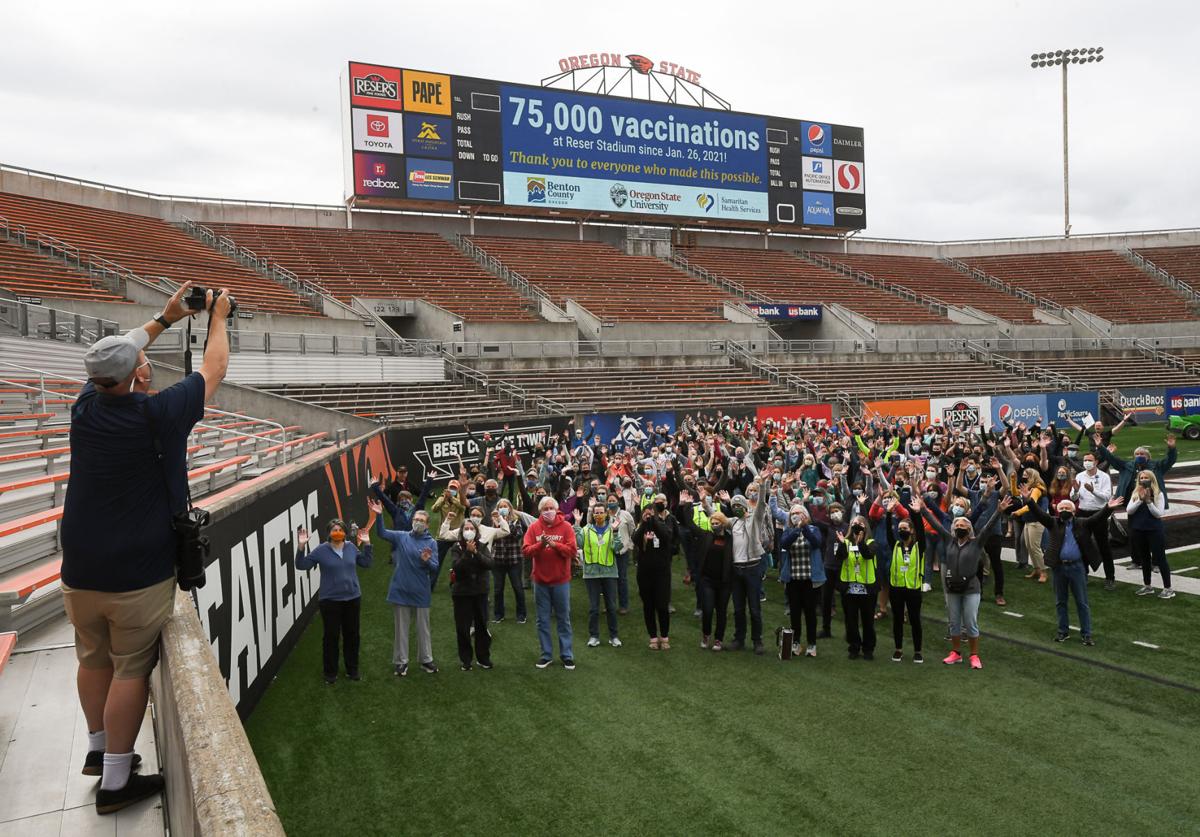 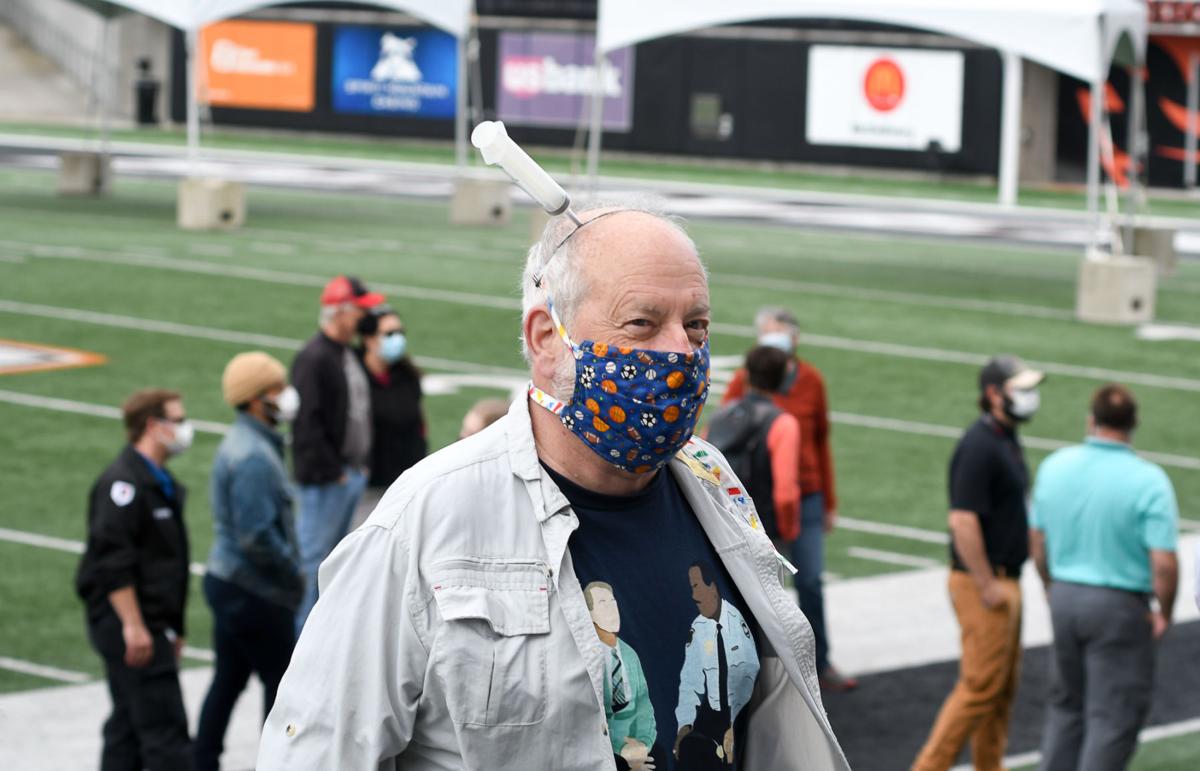 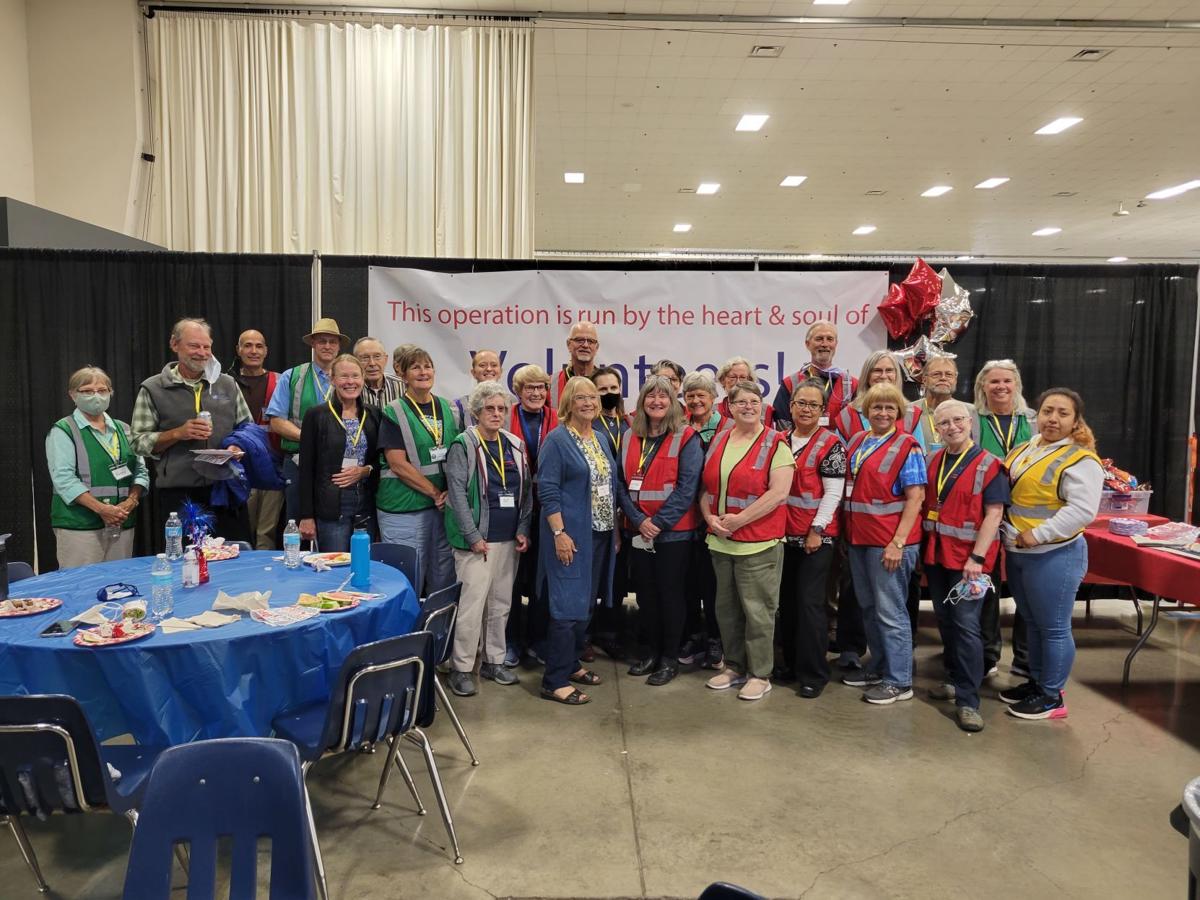 The Linn County Medical Reserve Corps, consisting of volunteers, were the ones who donated their time and skills to the mass vaccination clinic at the Linn County Fair & Expo Center in Albany. Many of them were available during a luncheon on Wednesday to show thanks for their efforts. (Troy Shinn, Mid-Valley Media)

Looking back on January, when the first mass vaccination clinics opened in Linn and Benton counties, can feel like peering back years instead of months. Daily COVID-19 case totals in the U.S. and around Oregon were spiking at their highest levels since the summer. The vaccines were still very new. Securing doses was difficult and vaccines were only available to the most vulnerable members of the population.

Even still, more than 300 people lined up to get a shot during the first clinic at the Linn County Fair & Expo Center in Albany on Jan. 20. A week later, on Jan. 26, hundreds more showed up to the Reser Stadium Concourse in Corvallis, despite the fact that it snowed that day.

“We were expecting more no-shows that day but actually had surprisingly few,” said Larissa Balzer with Samaritan Health, who oversaw the Reser clinic for months as well as other area vaccination clinics.

Both mass clinics came to an end this week after more than five months and tens of thousands of doses administered. While local vaccination efforts are by no means over, the closures acted as one big thank you to the hundreds of volunteers who made the effort possible.

At Reser Stadium, where around 75,000 vaccines have been administered since the clinic began on Jan. 26, volunteers were treated to a momentous photo opp. The hundreds of volunteers all gathered out on the turf, in front of the Jumbotron which displayed the total tally of vaccines doled out at the site.

The idea for the gathering, which took place just before the final day of shots there kicked off, was to provide a moment to shout-out all the people who made the vaccine campaign successful.

“We have had hundreds of volunteers who donated hundreds of hours of their time,” said Balzer, Samaritan Health’s vice president of strategy and planning. “We really couldn’t have done this without them, so we wanted to celebrate them.”

At the Linn County fairgrounds, where more than 50,000 doses were administered, Medical Reserve Corps volunteers were treated to a delicious luncheon that featured everything from smoked brisket to giant cookies. A cake with the words “Thank You MRC Volunteers” scrawled in frosting was served.

“This has been such an impressive operation … we couldn’t have done this without you,” Linn County Public Health Director Todd Noble told the volunteers gathered for the luncheon. “You made a difference and you saved lives.”

On both sides of the Willamette River, the clinics required coordination between county officials, schools, healthcare professionals and general community members.

Every volunteer, in both counties, said they felt pride at what they’d helped to accomplish. And they got to work with some really cool people.

“Because everyone volunteering is already coming in with the background of wanting to help people, no matter what station you work at you know you’ll be working with some of the best people you’ve ever worked with,” said Albany resident David Sullivan, who helped out at the fairgrounds sanitizing chairs at the medical monitoring station — where folks go to wait for 15 minutes after they receive a shot.

For medical professionals, specifically, the vaccination efforts were personal. They saw the lethality of this pandemic first-hand. Every week, and sometimes every day, they saw COVID patients in intensive care, struggling to breathe and in desperate need of limited supplies of oxygen.

“Everyone was doing everything they could to try and mitigate the disease but none of us had any way of getting control over it,” said retired nurse Bill Howden. “But when the vaccine came out, we saw it as a way of … doing something definitive and constructive to manage the disease.”

Being part of the effort to combat this disease has turned into a rewarding experience for many of them. Some even called it the highlight of their career.

“I just wanted to be a part of solving the COVID crisis,” said registered nurse Sandy Saltzer, who’s volunteered with the Linn County Medical Reserve Corps since January. “It has turned out to be the best part of my career I think. I’ve met some of the most interesting people here as patients.”

Some have been working on the vaccine front for years, long before COVID-19 was transmitting around the globe. Joining this urgent and local vaccination effort seemed only natural.

“I work in pediatrics and I give vaccines everyday all day, so I’m super passionate about what I call ‘giving the gift of immunity,’” said Neva Campbell Allen with Samaritan Pediatrics. “So, when the opportunity arose to work at Reser Stadium — I had worked at the second clinic that ever happened in Linn County, and then Reser opened up — I had enough flexibility with my department to work there one day a week.”

But it wasn’t just medical professionals who helped out. There were folks who took temperatures, sanitized seats and helped run supplies from one area of a clinic to another. In total, local vaccination efforts took thousands of volunteers from all walks of life. Even local politicians, like Linn County Commissioner Will Tucker, lent a hand.

“The people that got shots were so extremely happy and the people who gave the shots were really proud of what they were doing,” Tucker said. “It was such a great way to recharge my batteries, to go out there and see all those happy people out there doing such a great thing.”

Other backgrounds for volunteers included a retired schoolteacher and current student at Oregon State University.

“It’s been an honor to be part of it,” said Carol Smedberg, who taught at Memorial Middle School in Albany and at Calapooia Middle School. “It’s been fun to see so many teachers and students … I want to stop and chat with them but we can’t because we gotta keep it moving.”

She described how she’s volunteered since before vaccines were even available, back when the efforts focused on distributing face masks and testing people for COVID-19. They connected to their fellow volunteers as they dealt with the sweltering summer, and passed around hand warmers during the chilly winter.

The partnership between Samaritan, Benton County and Oregon State University provided a chance for students and faculty at the Corvallis campus to pitch in.

“I mean, it’s incredible to be able to give back to the community in a way that will change their lives,” said OSU junior Danielle Herinckx, who’s studying biohealth sciences. “To get grandparents vaccinated so they can see their grandkids again. I’ve shared a lot of sentimental moments with people aged 12 to 112.”

She said she was looking for a way to volunteer and get out into the community, especially after a long year of lockdown. She helped out by directing people from their registration process to the tables where they would receive their shots. This also meant that she had to find ways to accommodate patients, those with language barriers and those who were nervous about getting pricked.

“The relief people have when they have the vaccines … it’s indescribable and a lot like a weight lifted off their shoulders,” Herinckx said. “And to comfort the people who are really nervous has been really impactful.”

That personal impact that people felt was prevalent for all who volunteered, regardless of their background. Marshall Smith, who’s retired from a career in the military and as a civilian working for the Department of Defense, said that he knew he needed to jump on this chance to serve his community in a new way.

“I had some time on my hands and when I found about this clinic in January of this year, I knew I had to be a part of it,” he said. “I was oriented to doing service all my life and here’s another chance to contribute to the community.’

He moved to Corvallis from Seoul, South Korea, where he’d been working when he retired, once he heard about the domestic vaccination efforts. He said he saw firsthand the toll that COVID had on the public.

“They felt personally threatened by this disease,” Smith said. “So they saw (the vaccine) as a way to protect themselves. And, about the people I worked with, they are just great.”

In general, volunteers said that they were aware they were a part of history by helping out with these clinics.

“This is really history in the  making and to be a part of it is just amazing,” said Allen, the pediatric nurse. “It’s been a really satisfying and emotional experience.”

Ala. youth ranch mourns death of 8 kids in crash

Ala. youth ranch mourns death of 8 kids in crash

The mass vaccination clinics in Albany and Corvallis are coming to an end this week, though there are still a few days to secure a dose at the…

Officials hope vaccine incentives will encourage those on the fence

Making sense of mask rules: Important things to know about the new guidance

People are still plenty confused and frustrated about the new mask guidelines handed down last week by the Oregon Health Authority. While the …

A 77-year-old Linn County woman was added to Oregon’s novel coronavirus death toll on Wednesday, according to the Oregon Health Authority.

A longtime local volunteer and former Veteran of the Year in Linn County, Harlan Neal, died on Wednesday. A memorial service will be held next…

Oregon is about 90,000 people short of its goal to get at least one shot of vaccine into the arms of the state's eligible adults in order to l…

Here is a local, state and national update on the COVID-19 caseload and vaccinations based on reports Sunday from the Oregon Health Authority …

Yun Hsiang the dragon is 37th addition to Albany carousel

Pioneer Picnic kicks off this weekend in Brownsville

The annual Linn County Pioneer Picnic in Brownsville is back and, as always, happening on Father’s Day weekend. The event boasts that it’s “th…

Sometimes, people find success in areas that they aren’t planning to pursue professionally, and that's the case for Oregon State graduate Dere…

COVID-19 cases and deaths have both increased this week following two weeks of steady decline. Caseloads started in the high 100s this week an…

The Linn County Medical Reserve Corps, consisting of volunteers, were the ones who donated their time and skills to the mass vaccination clinic at the Linn County Fair & Expo Center in Albany. Many of them were available during a luncheon on Wednesday to show thanks for their efforts. (Troy Shinn, Mid-Valley Media)