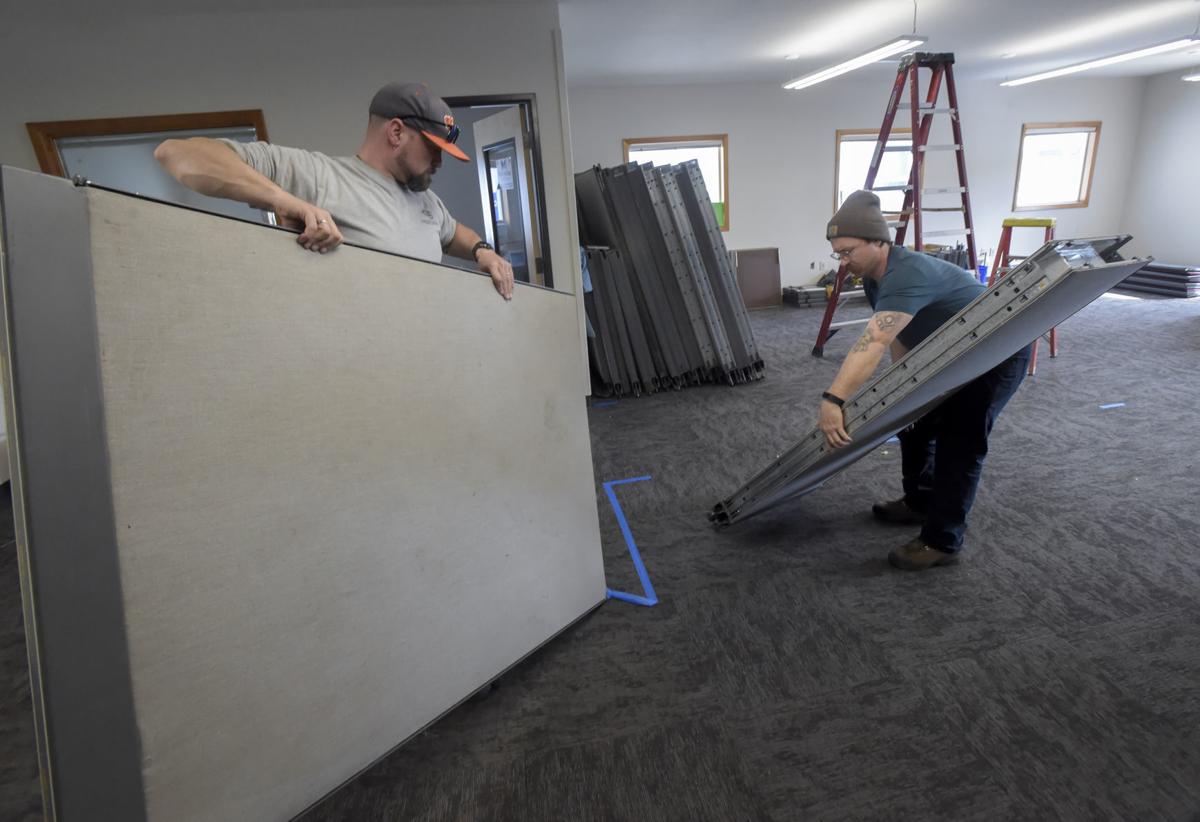 A 5,000-square-foot second story has been added to the Avery Building. The overhang was supposed to provide a covered parking area, but the county decided against allowing parking there because of building code requirements. See story on Page A2.

After nearly a year in exile, the staff of the Benton County Community Development Department is getting ready to return to the Avery Building.

But the department’s longtime home at 360 SW Avery Drive, near the east entrance to Avery Park, will look considerably different when they move back in.

Contractors and county staff are finishing work on the main phase of a $2 million expansion and remodeling project at the building, which also houses staff for the county’s Public Works and Natural Areas and Parks departments.

All three departments have been making do for years with extremely cramped quarters, but the project will give everyone more elbow room.

“The building was about 7,200 square feet and now it’s 12,000, so it was a significant increase,” said Chris Bielenberg, who retired last June as the county’s facilities manager.

Bielenberg came back to work on a contract basis to manage the remodeling project, which also includes work on two other county buildings. The effort began with a $112,000 facelift to vacant office space at the Sunset Building, 4077 SW Research Way, and will wrap up with a $7.6 million upgrade to the Public Services Building, the Health Department’s longtime home at 530 NW 27th St.

To make room for the Avery Building remodel, Community Development vacated the western half of the building last May and has been working out of the Sunset Building. The department will move back into its renovated quarters — which includes a redesigned permits counter and a new self-help center for contractors and homeowners — over the weekend and will be ready for customers on Tuesday.

In the final stage of the Avery project, the eastern half of the ground floor will get a bigger break room along with some cosmetic improvements and energy efficiency upgrades. That work should be finished in four to five weeks.

New cubicles are being set up in open-plan areas throughout the building. The divider partitions and office furniture were donated to the county by HP Inc., which had a surplus following downsizing of the company’s Corvallis work force.

“We’re setting up a lot of cubes, so that’s a lot of money” the county didn’t have to spend on furnishings, Bielenberg said.

The biggest change to the building, however, is happening upstairs — in the form of a new, 5,000-square-foot addition that covers the building’s western half and juts out over the parking area toward the park.

It houses private offices, rows of cubicles and a large conference room.

The project was designed by Carlson Veit Architects PC of Salem, and Baldwin General Contracting of Albany was the general contractor.

In the meantime, the county has been taking bids from contractors for the renovation and remodeling of the Public Services Building. Construction is expected to start by mid-April and wrap up by February.

Bielenberg is working with the project’s designers, AC & Co. Architecture Community of Salem, on a final round of value engineering.

“We’ve identified up to $100,000 in additional savings they felt they could do without much impact on the design of the building,” Bielenberg said.

As with the Avery Building, some county employees who work in the Public Services Building will relocate during construction and then move back when their part of the project is finished. Others, however, will be making a permanent move.

The Health Department’s administrative staff, public health and environmental health divisions will be moving into the renovated space at the Sunset Building. That will leave room to expand operations of the county’s main health clinic, which has seen a major increase in demand over the past few years. The building will also get an updated facade.

No parking zone at Avery Building

The most striking feature of the Avery Building remodel is the second-story addition, which covers the western half of the building and juts out over the parking lot toward Avery Park.

The overhanging part of the structure, designed by Carlson Veit Architects PC of Salem, is supported on slender steel columns. It was supposed to provide covered parking for 10 vehicles — but nobody will be allowed to park there.

That’s because of a provision in the state building code that requires added fire safety measures for office buildings that have parking garages in them.

“If we were to use it, it changes the type of occupancy,” said county project manager Chris Bielenberg. “If it’s mixed occupancy, it requires a one-hour firewall.”

To get that rating, the county would have had to beef up the west wall of the Avery Building substantially, a fairly pricey proposition. More to the point, it would have had to eliminate most or all of the windows on that side of the building, making the interior much more gloomy.

Alternatively, the county could have installed a sprinkler system throughout the building, but that would have cost in the range of $200,000 to $300,000, Bielenberg said, “so that really wasn’t an option.”

The problem was caught before construction began during a preliminary review of the plans by a third party, a standard part of the process. Given the budget constraints for the project, county officials decided against any costly design changes.

“A conscious decision was made to move forward without the parking,” Bielenberg said.

Ron Dettrich, the building official for Benton County, said he’s not sure why the building was designed for covered parking without a firewall or a sprinkler system, noting that the code requirement is nothing new.

“The third-party plans examiner pointed it out, but it’s not rocket science,” he said. “The code’s pretty straightforward.”

Carlson Veit Architects did not return a call seeking comment on Wednesday.

Californians 16 and up now eligible for vaccine

Fauci, Jordan clash over what it takes to reopen

Fauci, Jordan clash over what it takes to reopen

The Benton County Health Center will hold a grand reopening celebration and open house from 3 to 7 p.m. today.

County clinic gets a facelift

After a multiphase remodeling project that forced some departments to temporarily work in offsite trailers, Benton County’s main health clinic…

A 5,000-square-foot second story has been added to the Avery Building. The overhang was supposed to provide a covered parking area, but the county decided against allowing parking there because of building code requirements. See story on Page A2.