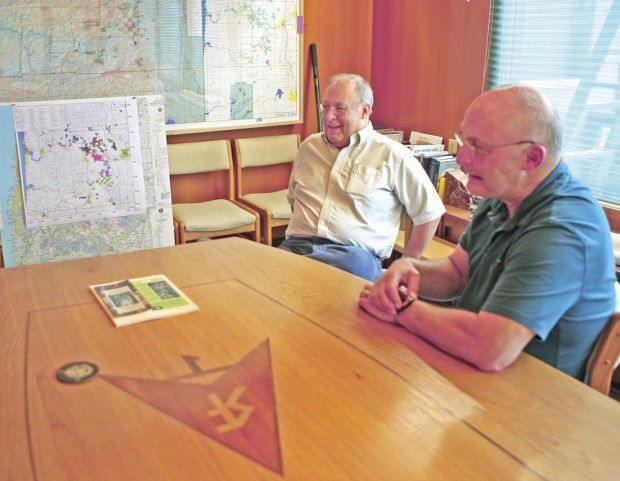 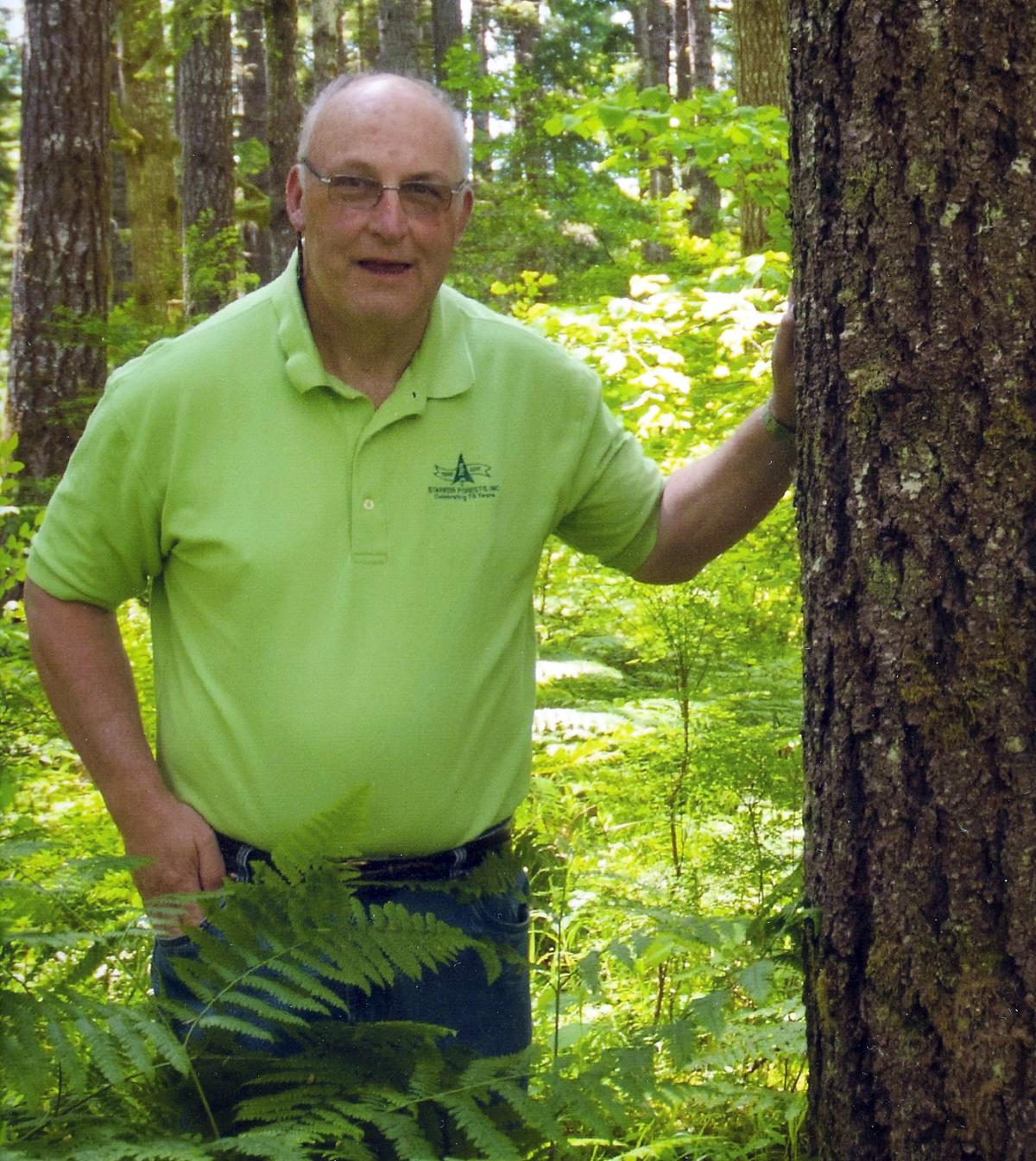 Barte Starker poses for a photo at Starker Forests' Tum Tum Tree Farm near Blodgett. Starker died on Tuesday at the age of 67. 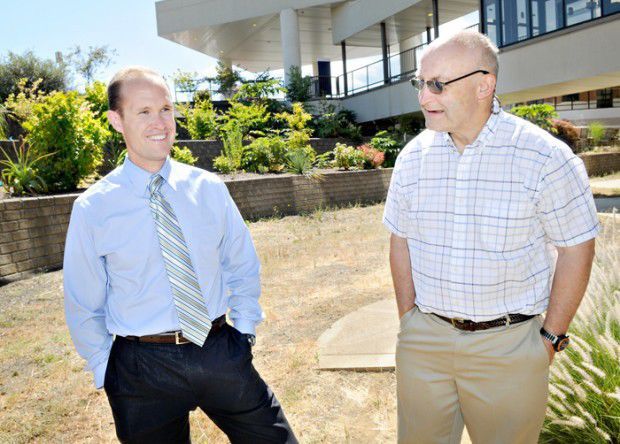 Barte Starker, right, talks with Jeff Larson, executive director of the Good Samaritan Hospital Foundation, in 2010. The hospital was one of many community causes Starker supported throughout his life.

Barte Starker spent his professional career growing timber for his family business, but the people who knew him best said he quietly devoted much of his personal time to helping his industry and his community thrive.

Starker died Tuesday at 67 of complications from Parkinson’s disease.

Born March 12, 1950, Barte Starker grew up in Corvallis and graduated from Corvallis High School. In 1972 he graduated from Oregon State University with a bachelor’s degree in forest management and followed his older brother, Bond, by going to work for Starker Forests, the timber company founded by their grandfather T.J. Starker.

Both brothers were thrust into management roles earlier than expected in 1975 when their father, Bruce Starker, who by then was running the company, was killed in a plane crash.

Together, the brothers grew the family business into one of the most respected private timberland owners in the state. Headquartered in Philomath, Starker Forests today has 22 employees and about 86,000 acres of standing timber in Benton, Linn, Lincoln, Lane and Polk counties.

In an interview on Wednesday, Bond Starker remembered his younger brother as a devoted husband and father who enjoyed hunting and fishing, worked hard to improve forestry practices in Oregon and served his community in multiple ways.

After their father died, he recalled, the brothers divided their responsibilities at Starker Forests according to their strengths and interests. Bond, as president, focused on the business side while Barte, as executive vice president and secretary, oversaw on-the-ground forestry operations.

“We essentially managed the business as equal partners throughout our careers,” Bond Starker said.

He said his brother was diagnosed with Parkinson’s disease about 10 years ago and stepped away from an active role with the company in April 2015 as his health deteriorated.

The family plans to hold a public memorial service after the first of the year.

From the beginning, Barte Starker took an active role in timber industry affairs, serving on numerous boards and committees. He helped guide research to improve forestry practices as chair of the Coastal Oregon Productivity Enhancement Program and helped shape timber policy as a member of the Oregon Board of Forestry.

In 1990, he was named Forester of the Year by the Society of American Foresters.

Barte Starker also served on a number of community organizations, including the boards of the Boys & Girls Club of Corvallis, the Good Samaritan Hospital Foundation and the Benton County Fair Foundation.

Mike Cloughesy, director of forestry for the Oregon Natural Resources Institute, called the Starker family “thought leaders” in the industry. He remembered Barte Starker as a “people person” who enjoyed leading tours of his family’s timberlands to show the public how a working forest operated.

“He loved to get people out in the woods,” Cloughesy said. “He felt that if people saw what foresters do, they would have a better opinion of our industry.”

Samaritan Health Services President and CEO Larry Mullins said Barte Starker was the third generation of his family to serve on the hospital foundation’s board.

“They’ve had such a huge impact on the hospital but an even greater impact on the community,” he said. “Barte especially just really felt very passionate about the work being done.”

Mullins said Starker was a major supporter of the fundraising campaign to build a regional cancer center at Samaritan’s Corvallis hospital. He also helped lead the charge to create a healing garden at the hospital, an idea championed by his mother, Elizabeth Starker Cameron.

“Barte Starker will be missed,” Mullins said. “No doubt about it.”

Starker was a strong supporter of programs for young people, especially the Boys & Girls Club of Corvallis and Philomath Youth Activities Club.

He had served on the board of the Corvallis Boys & Girls Club since 1984, and CEO Helen Higgins said Starker was one of three people — along with Tom Ahlers and Mike Schweitzer — who helped guide the construction of the club’s main building despite considerable neighborhood opposition.

He also played a key role in the creation of the club’s $6 million teen center, which is now under construction. Higgins recalled feeling overwhelmed at the prospect of having to raise so much money, but Starker reassured her.

“He looked at me and said, ‘Helen, we need to do this, and I will help you,’” she remembered.

Days later, he invited her to make a pitch for financial assistance to the board of Starker Forests — which wrote her a check for $1 million.

Initial site work has finally begun on the Mid-Valley Intermodal Center in Millersburg, after a yearslong process of planning and competing ag…

Multiple agencies responded to a large structure fire in Tangent on Saturday afternoon, at approximately 12:40 p.m. The cause of the fire is u…

Barte Starker poses for a photo at Starker Forests' Tum Tum Tree Farm near Blodgett. Starker died on Tuesday at the age of 67.

Barte Starker, right, talks with Jeff Larson, executive director of the Good Samaritan Hospital Foundation, in 2010. The hospital was one of many community causes Starker supported throughout his life.