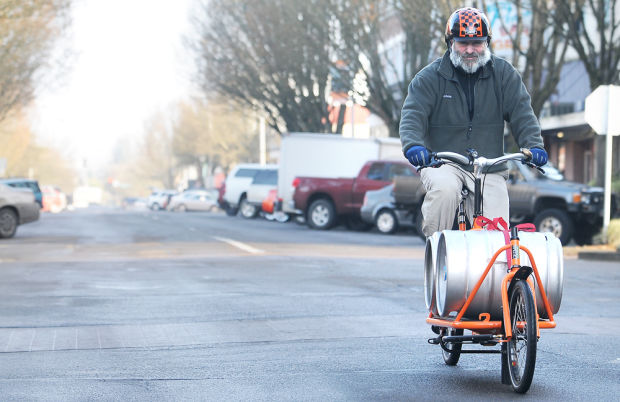 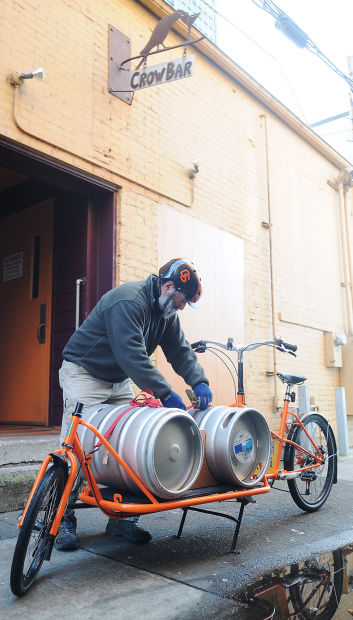 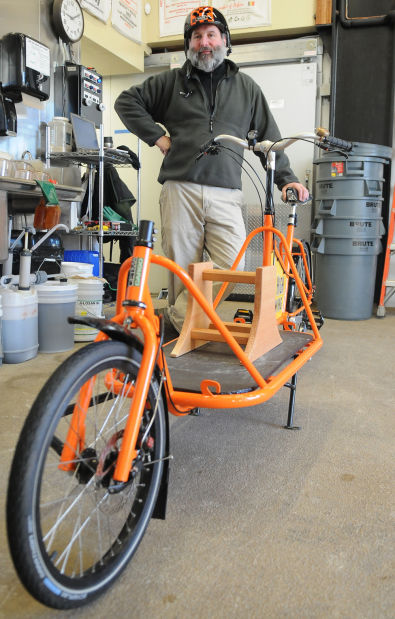 The custom cargo bike is used to deliver 8-10 kegs a week to nearby businesses, and was created by Cetma Cargo in Eugene. (Jesse Skoubo | Corvallis Gazette-Times) 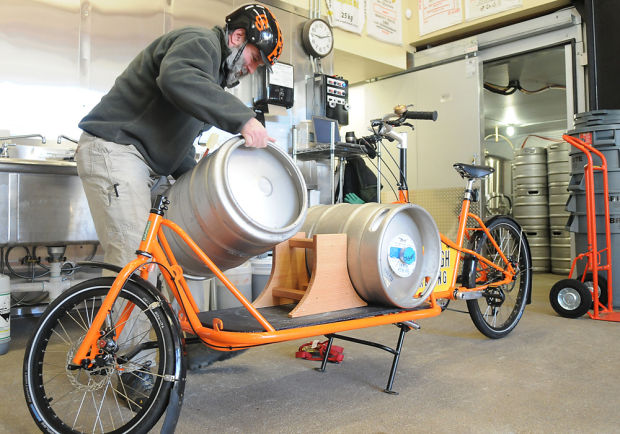 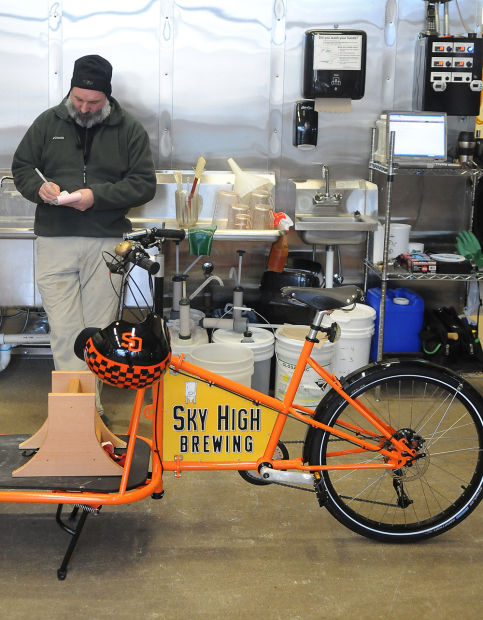 It’s Friday morning and Laurence Livingston is geared up and ready to go.

The head brewer and brewery manager at Sky High Brewing rolls out two 150-pound kegs of beer in the brewing area.

“Lift with your legs, not your back,” Livingston says as he lifts one of the kegs onto the bay of the orange and black bicycle in front of him.

After he places the other keg onto the flat area, Livingston straps both of hem down with a belt, opens the sliding cargo door to the brewery and hops onto the bicycle.

He’s wearing a black helmet with the Oregon State University “OS” logo and a checkered black and orange stripe.

Slowly but steadily, Livingston pedals his 300-pound cargo to the intersection of Second Street and Jackson Avenue. He stops at the stop sign, turns left onto Second Street and pedals toward his first delivery stop: the downtown American Dream Pizza parlor at 214 S.W. Second St.

At nine and half feet long and sporting a flat cargo area in front of the handlebars, the custom-made bicycle isn’t your ordinary bike, but it’s perfect for delivering kegs of beer.

“People like seeing beer delivered by bike,” Livingston said. “You see it more in Portland or Eugene. It’s pretty cool-looking.”

Since Sky High Brewing opened its taproom on Aug. 10, Livingston has used the bicycle to deliver kegs of beer to customers.

“The owners and I are all avid cyclists,” Livingston said. “We looked around and saw this. Corvallis is such a bike-friendly community, so we thought this would be a great fit. It’s pretty compact and easy to get around ... We made a commitment to being sustainable and this helps us use less fuel.”

Livingston makes most of his bicycle deliveries on Friday, mainly to the two American Dream Pizza parlors, as well as places such as Del Alma and Bombs Away.

He has made several special deliveries including to Reser Stadium during the Civil War football game on Nov. 24.

Livingston said he usually delivers between eight to 10 kegs every Friday by bicycle. He said that his longest trip is about two miles to American Dream on Monroe Avenue.

Livingston said it took awhile to get used to riding the bike because of the added weight. He used smaller kegs at first to get more comfortable riding.

And once he gets going, especially uphill, Livingston said said it’s hard to stop. The bicycle features a motorcycle-style kickstand to handle the heavy loads. However, Livingston is proud to say that he’s never crashed the bicycle.

Livingston said he sees plenty of reactions from onlookers. He recalled one time when a man followed him for a time, trying to snap the perfect picture of the eye-grabbing bicycle.

And while he make about four to five deliveries on Friday, Livingston said he could make deliveries all day if needed. He said he enjoys the workout.

“Brewing is a pretty physical job, so you have to be in shape,” Livingston said. “But doing this allows me to get out of the brewery once in awhile.”

Raju Woodward is the K-12 education reporter for the Gazette-Times. He can be reached at 541-758-9526 or raju.woodward@lee.net

The custom cargo bike is used to deliver 8-10 kegs a week to nearby businesses, and was created by Cetma Cargo in Eugene. (Jesse Skoubo | Corvallis Gazette-Times)