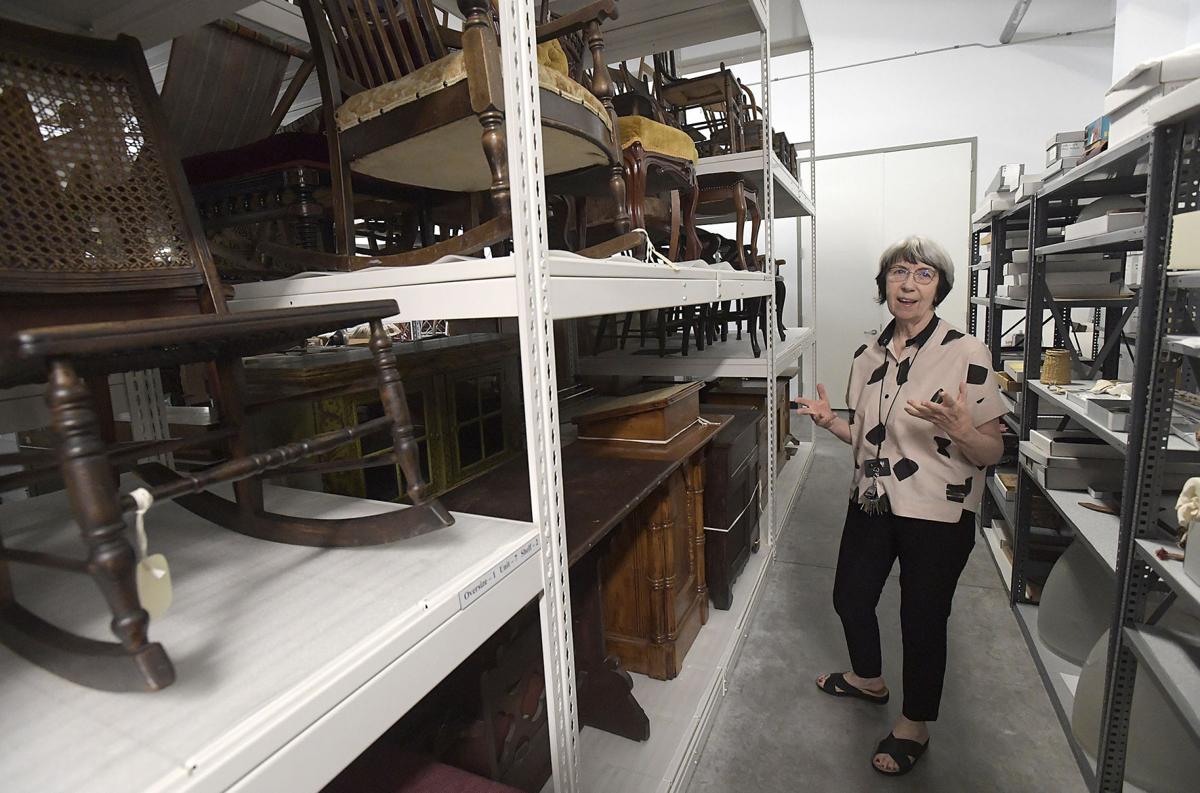 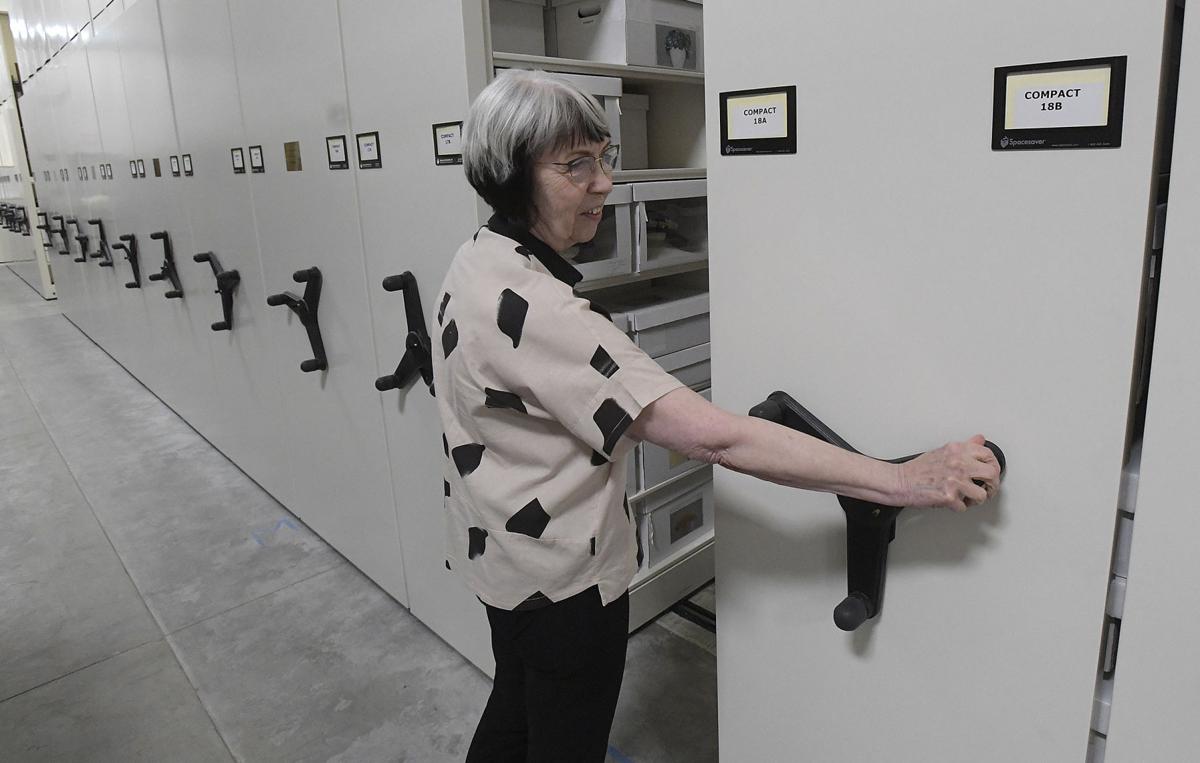 Irene Zenev opens a row of storage in the Johnson Collection Care Facility, which houses more than 120,000 items, including many from the Horner Collection that arrived in 2008 from Oregon State University's Gill Coliseum.

After 22 years of working for the Benton County Historical Society, executive director Irene Zenev is retiring at the end of July.

Zenev was exhibit curator of the Benton County Historical Museum in Philomath from 1998 to 2006. She then resigned because “I had this idea I was going to teach Pilates,” she said.

But her Pilates career lasted only nine months. In 2007, she was invited to become executive director of the historical society.

“I think they asked me because I knew where all the light switches were,” she said with a chuckle.

Her return to the museum housed in the former Philomath College building in Philomath came at an exciting time that Zenev described as a “perfect storm” of events.

In 2009, Oregon State University and the historical society reached an agreement for the society to manage the university’s Horner Collection, an assemblage of more than 60,000 artifacts, photographs and documents from around the world. These objects had been displayed since 1925 in the Horner Museum, most recently housed in the basement of OSU’s Gill Coliseum. That museum closed in 1993 due to lack of funding, though.

The artifacts were gathering dust and needed a home. Once the collaboration became official, the biggest question was where to move the massive collection. Zenev and the society’s board of directors came up with a plan. Funding was secured to build a climate-controlled building called the Johnson Collection Care Facility next to the Philomath museum. Zenev said purchasing shelving for the collection was one of her first big projects.

Five 40-foot moving vans traveled back and forth between Gill Coliseum and the Johnson Collection Care Facility for five days, transporting the collection, including buggies, items from the Oregon Trail, a Native American canoe, and Bruce the Moose, the taxidermied creature who has become the society’s mascot.

So far, so good, but the collection was far too large to go on exhibit at the Philomath museum. “We have lots of administrative and storage space in Philomath, but not much exhibition space,” Zenev said.

The historical society board had planned to have a facility in downtown Corvallis for years. In 2000, the board purchased property at 411 S.W. Second St. where the Corvallis Museum now stands.

With the Horner objects safe and sound and awaiting a new home, focus turned to building the Corvallis Museum. Zenev said she traveled and visited various museums in preparation for the project. The society’s fundraising efforts brought in $11 million, most of it from local residents.

Then one day, inspiration arrived in the mail. Zenev picked up the mail, which included the Aug. 25, 2008, edition of New Yorker magazine. “The New Yorker literally opened to a page that showed the renovations of 2 Columbus Circle in New York, done by a young Oregon architect named Brad Cloepfil of Allied Works,” she said. The building was “so gorgeous I couldn’t stop looking at it.”

She called the Portland firm and asked if they wanted to design the museum, but was told the project was too small. However, Brad Cloepfil called Zenev the next day.

She told Cloepfil about her concept of building the facility like an art museum, with a modern, light, airy feeling, and told him about her “off-the-wall curatorial stuff,” such as combining hats and chairs in an exhibit. “I really like the way you think,” Cloepfil said. The society board hired Allied Works, which accepted the job.

The new museum opened in February.

“They were the perfect design firm for the project,” Zenev said. “The space just feels so good. It’s like the air is different.”

Zenev is originally from New Jersey, and studied anthropology at the University of New Mexico in Albuquerque. Her museum career began in 1985 at the Douglas County Museum of History and Natural History in Roseburg, where she worked as education coordinator and then curator of history.

When asked what she plans to do in retirement, Zenev said, “I might turn to a life of crime.” She laughed and said she hasn’t made any firm plans, but does intend to stay in Corvallis and continue her study of Pilates, along with yoga, Zumba and clogging.

A retirement celebration for Zenev is set for 2 to 4 p.m. July 10 at the Corvallis Museum, and will include a brief program at 3 p.m.

To view a video of Irene Zenev discussing the Corvallis Museum and its architect, go to our websites.

Corvallis Museum, more than 20 years in the making, finally opens

The first visitor through the doors when the new Corvallis Museum opened at 11 a.m. on Friday was Freda Vars, and one of the first things that…

Bruce the Moose finally has a new home.

Bruce the Moose was all set to make his big move, but now, like everybody else, he’s cooling his heels — or hooves, to be anatomically correct.

Corvallis Museum unveiled: Donors get a sneak peek at facility set to open early next year

Sportsman’s Holiday Weekend is set for Thursday through Sunday, July 8 through 11, in Sweet Home.

The 68th annual Philomath Frolic and Rodeo is set for Thursday through Saturday, July 8-10, at Skirvin Park, 502 S. 13th St. This year’s theme…

Oregon State Police troopers and emergency personnel responded to a single-vehicle crash near milepost 70 on Highway 22, near Downing Creek, a…

A new grant will allow Oregon State University researchers to study the nutritional value of more than 100 bee-pollinated crops and plants, a …

A picnic for former employees of the International Paper mill in Millersburg is set for 11 a.m. Aug. 25 at Millersburg City Park, 3030 Alexand…

The Linn County Sheriff’s Office has suspended the search for a missing climber on Mount Jefferson, according to a press release issued Thursd…

Irene Zenev opens a row of storage in the Johnson Collection Care Facility, which houses more than 120,000 items, including many from the Horner Collection that arrived in 2008 from Oregon State University's Gill Coliseum.