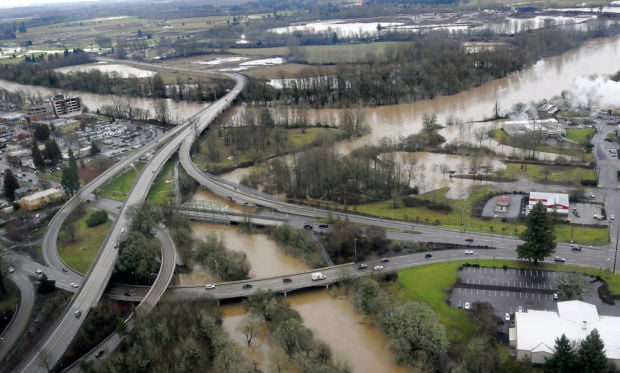 The Benton County Climate Change Adaptation Plan includes several potential responses to increased fllod risks, from public education campaigns to limiting development in floodplains. High water at the confluence of the Marys and the Willamette river during flooding in 2012. (Andy Cripe | Corvallis Gazette-Times) 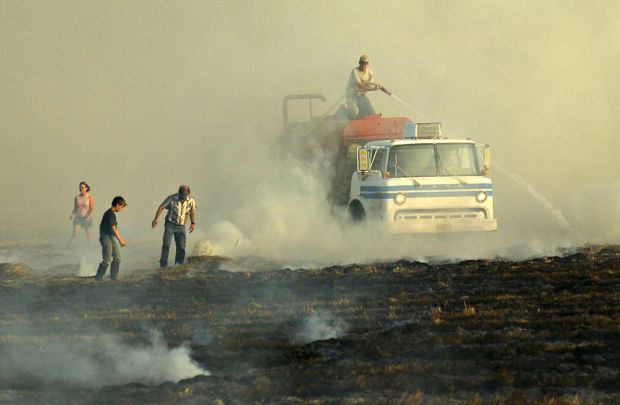 Larger and more frequent wildfires are one of several potential climate change impacts Benton County officials have begun to plan for. Dozens of neighbors from surrounding farms came out to help fight a grass fire sparked by a downed power line in a field at the intersection of Payne Road and Highway 99W south of Corvallis. (Andy Cripe | Corvallis Gazette-Times)

Everybody talks about climate change. Now Benton County is trying to do something about it.

The Benton County Climate Change Adaptation Plan, recently released in draft form, describes potential impacts of a warming climate on Benton County over the next century or so and outlines possible strategies for dealing with those impacts.

Bill Emminger, the county’s environmental health director, calls the plan a first step toward coming to grips with the concrete effects of this global issue here in our corner of the world.

“We know climate change is coming,” Emminger said. “But what does that really mean when you bring it back to the local level?”

While these predictions aren’t new in themselves, the adaptation plan goes a step further by sketching out possible responses on a department-by-department basis.

The Health Department could educate the public on increased risks of asthma, skin cancer, vector-borne disease and other dangers.

Public Works might consider road improvements for better emergency access during fires and floods, higher-capacity culverts and bridges to handle runoff from heavy rains, and expanded public water systems to make up for declining well productivity.

And the Sheriff’s Office may need to update the county’s natural hazards and emergency operations plans to reflect changing conditions, as well as conduct training exercises to make sure those plans can be put into effect when needed.

“Some things we may be able to roll into existing programs or work projects, but some are going to be more costly,” Emminger said.

But even though project funding will be a challenge, Emminger says the process of developing the adaptation plan will continue to pay dividends if only because it has put climate change preparedness firmly on the agenda of county department heads.

“Those are the kinds of discussions we hope to start generating in the community so we can be better prepared when these events come,” he said.

Benton County’s adaptation plan is part of a larger effort playing out at the state and national levels.

Under a program called the Climate-Ready States and Cities Initiative, the federal Centers for Disease Control and Prevention has provided planning funds to 16 states and two cities. Benton County is one of five local jurisdictions that piloted the program in Oregon. (The others are Crook County, Jackson County, Multnomah County and the North Central Public Health District, which incorporates Wasco, Sherman and Gilliam counties.)

Benton County was awarded a $35,000 grant in 2011 to begin the planning process, resulting in a 41-page document focused on potential health impacts of climate change. The 23-page adaptation plan, funded by a $5,000 grant awarded last year, built on the foundation of that earlier planning effort.

The Oregon Health Authority, which administered the federal grants, is preparing to issue a statewide climate and health report, according to OHA program manager Julie Early-Alberts, and is using some of the information gleaned from the county-level plans to develop a climate change adaptation plan for Oregon, due out in 2016.

All of the plans use something called the BRACE framework (the acronym stands for Building Resilience Against Climate Effects), a flexible planning model developed by the CDC for forecasting and responding to climate-driven public health threats.

Based in part on lessons learned from pilot projects like the one in Benton County, the state is rolling out a BRACE “toolbox” to help other jurisdictions with climate change preparedness planning.

“We got a lot of feedback from the counties on what was working and what wasn’t at the local level,” Early-Alberts said. “There’s some knowledge there that local communities have that we don’t have.”

It’s too early to tell what sort of impact county-level or even state-level planning efforts will have on actually slowing or mitigating the effects of a warming planet, but just talking about the problem has benefits, she added.

“A lot of times, more than the actual document itself, what is of value is that the conversation is started and partnerships are formed,” Early-Alberts said.

Other local jurisdictions are starting to have some of those conversations as well.

The city of Corvallis, for instance, recently completed a greenhouse gas inventory. And the transportation-focused Corvallis Area Metropolitan Planning Organization has launched a planning project aimed at reducing GHG emissions in the region.

The way Emminger sees it, all of these efforts are worthwhile.

“What’s our alternative? I think we need to try and do what we can at the local level,” he said.

“This is certainly something that’s going to take a worldwide effort,” he acknowledged. “But it’s got to start somewhere, right? If each individual community starts doing its part, I think that’s a move in the right direction.”

After a fight at a rodeo south of Albany, security escorted a man involved to his pickup, and Hector Cisneros came out to the truck and starte…

The murals just keep on coming in Corvallis.

Blodgett man charged with Albany homicide, to be held without bail

A Blodgett man accused of murdering his girlfriend, an Albany woman, will be held in the Linn County Jail without bail.

The plot thickens in the Amazon Support scam reported in this column last week. A local resident, visiting Minnesota for vacation, says that h…

After weeks of steady decline, new COVID-19 cases and deaths related to the virus have increased, according to Oregon Health Authority data.

The Benton County Climate Change Adaptation Plan includes several potential responses to increased fllod risks, from public education campaigns to limiting development in floodplains. High water at the confluence of the Marys and the Willamette river during flooding in 2012. (Andy Cripe | Corvallis Gazette-Times)

Larger and more frequent wildfires are one of several potential climate change impacts Benton County officials have begun to plan for. Dozens of neighbors from surrounding farms came out to help fight a grass fire sparked by a downed power line in a field at the intersection of Payne Road and Highway 99W south of Corvallis. (Andy Cripe | Corvallis Gazette-Times)