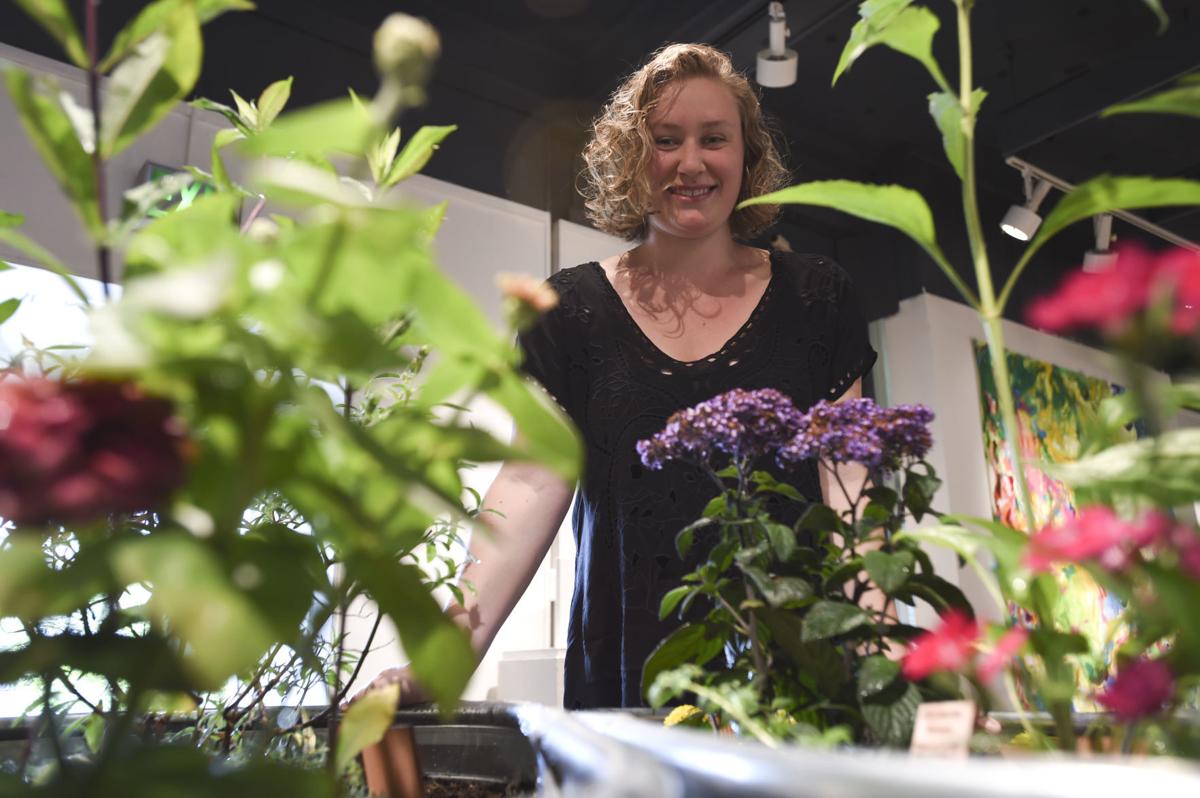 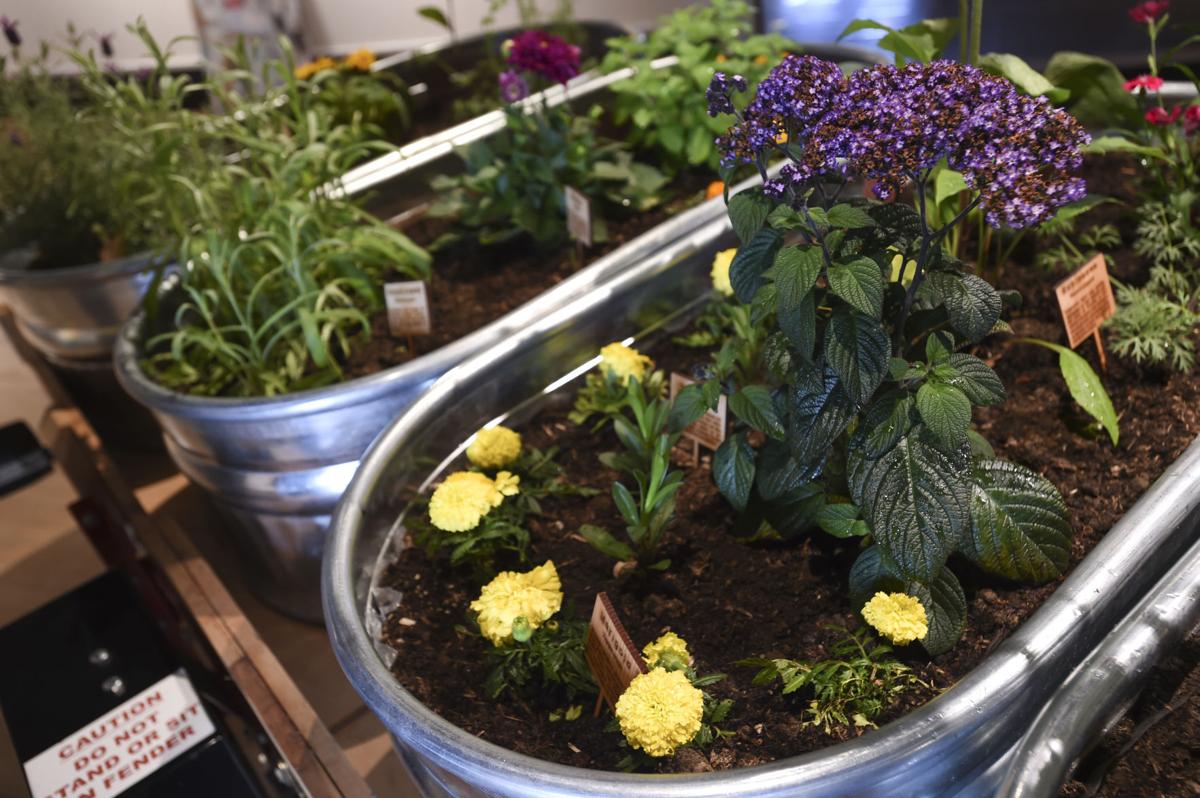 As they are every year at this time, the walls of Oregon State University’s Fairbanks Gallery are adorned with the thesis projects of graduating art majors.

But this year’s show has something different: Parked in the middle of the floor is a 4-by-8-foot flatbed utility trailer holding four galvanized planters filled with colorful flowers.

It’s the latest iteration of “The Mobile Color Laboratory: A Natural Pigment and Dye Garden,” an evolving project that has become something of an obsession for Madelaine Corbin, who will graduate from OSU on Saturday with a bachelor of fine arts degree.

Displayed in the midst of a gallery, it clearly appears to be a work of art — but its homely materials and functional design just as clearly mark it as part of the workaday world.

For Corbin, that’s kind of the point.

“The idea is really to try and experiment with community engagement, art and horticulture, see where those boundaries are (and) open up those boundaries between art and community and campus life,” she said. “That’s why it’s mobile, because it really exists in those in-between spaces.”

The project had its genesis when Corbin was working in OSU professor Mas Subramanian’s chemistry lab, where she was part of a team that found a way to synthesize a previously unknown blue pigment. Another source of inspiration came when she did a practicum with New York artist Mary Mattingly, who created an edible landscape on a barge that floated through the city’s waterways.

“I started looking at how people could inject color into their everyday lives,” said Corbin, a 2012 Corvallis High graduate. “My project is focused more on color and the origins of color and how we could grow our own.”

An earlier version of the project was built on a repurposed bicycle trailer.

For the current incarnation, Corbin assembled a trailer kit purchased at a local hardware store. She used recycled cedar boards and fenceposts for the deck. The plants were grown from donated starts or seeds or bought with donated funds (a “license plate” on the back of the trailer lists the names of the donors). At some point, Corbin says, she may add some PVC hoops and plastic sheeting to turn the whole thing into a rolling greenhouse.

Both versions of “The Mobile Color Lab” are designed to be towed to various sites for art workshops. Corbin has also designed two companion pieces — a field guide to the plants in the lab and a workbook with space for notes, sketches, rubbings and so on — that can be ordered online.

At Corbin’s workshops, participants are encouraged to use plants from the rolling garden in a variety of ways. Some, such as marigolds, sunflowers and dahlias, can be simmered to produce dyes for tinting textiles. Basil is edible, echinacea and chamomile have medicinal properties, and still others — the pasqueflower plant, for instance — have elegantly filigreed leaves that can be pounded onto pretreated cloth in an ancient Japanese printmaking process.

“Part of why this is called a laboratory is because they’re total experiments,” Corbin said. “I have no idea what’s going to happen, and that’s really exciting to me.”

Of course, she could have done it the other way around by setting up workshops in a gallery or art studio and inviting people to attend. But Corbin really liked the idea of taking art out of the gallery and bringing it to the people.

“Sometimes the gallery can be intimidating, and this project really wants to be approachable,” she said.

“And the reversal of that is kind of the same question I have: Why, out in the world, do we not see more things as art? I just love that idea that you’re actually immersed in it all the time and you don’t have to go to a special place to see it.”

After graduation, Corbin will be showing a version of her “Mobile Color Laboratory” at the highly regarded Blackfish Gallery in Portland and starting a job as assistant to the director of Djerassi, a residential retreat for artists in the Santa Cruz Mountains south of San Francisco.

She’s not sure what direction her own art will take next, but she intends to keep on questioning the assumptions that create artificial barriers between the art world and everyday life.

“That’s kind of the responsibility of an artist is to break out questions and think of them in different ways,” she said.

“I get that way every day. I have so many questions, and if the art is doing that for you, then, oh my God, it’s working!”

More than 23,000 people are expected to attend the free ceremony, which begins at 10:30 a.m. in Reser Stadium, located at Southwest 26th Street and Western Boulevard on the Corvallis campus.

There is no charge for parking during the event. The Reser lot generally fills up early, but free shuttle buses will be running from other lots around campus.

Following the ceremony, there will be a reception for graduates and their families at the CH2M Hill Alumni Center across the street from the stadium.

Degree: Bachelor of fine arts in applied visual arts with a minor in art history

What’s next: An exhibition at Portland’s Blackfish Gallery and a job as assistant to the director of Djerassi, a rural artists’ retreat near Woodside, California