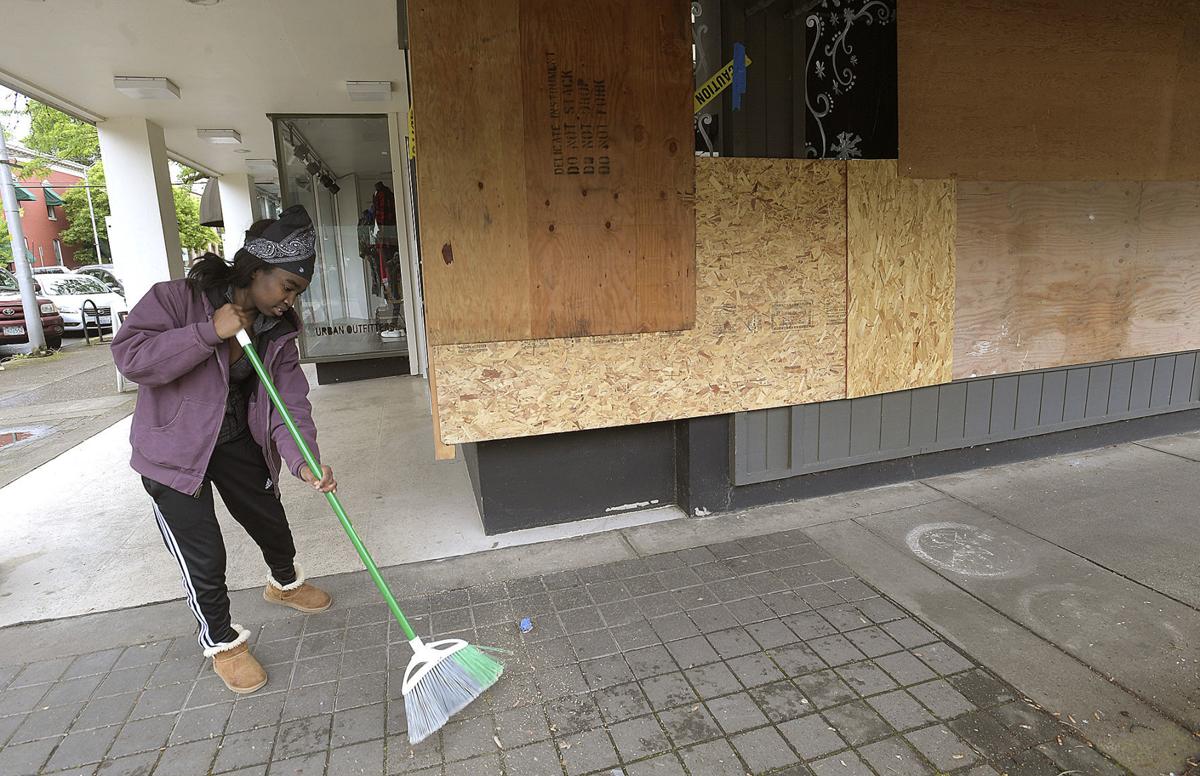 Carmyn Washington, manager of Runway Fashion Exchange in downtown Corvallis, finishes sweeping up glass shards outside her the store. The resale shop was one of at least 10 downtown businesses that had windows smashed in an outburst of vandalism. 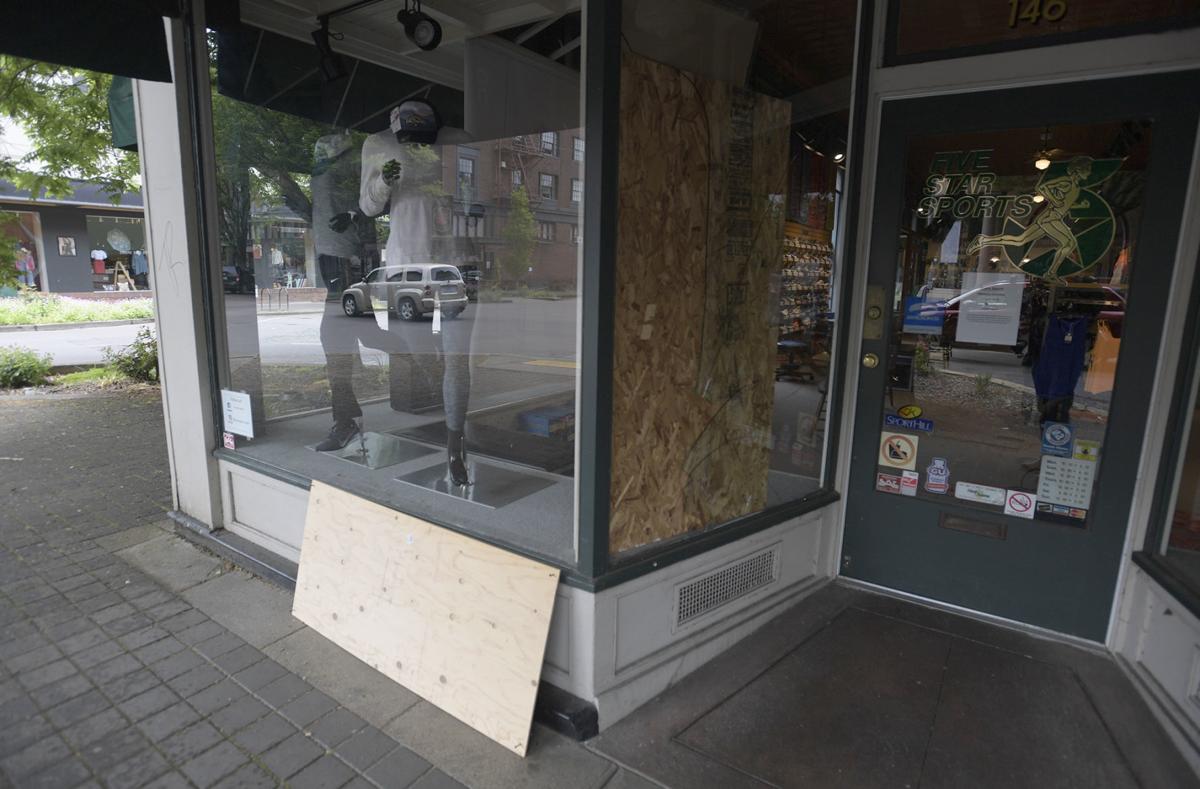 A display window at Five Star Sports was broken out on Sunday night. 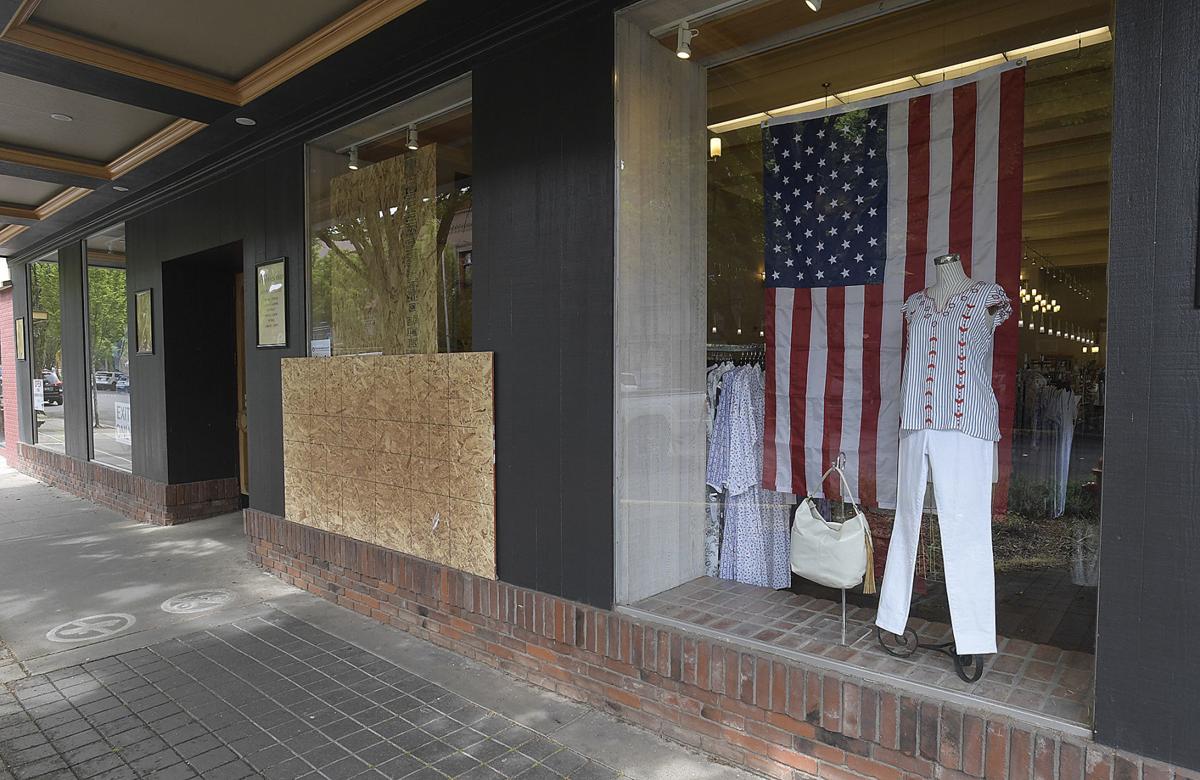 A sheet of particleboard covers a broken window at the Clothes Tree on Monday. 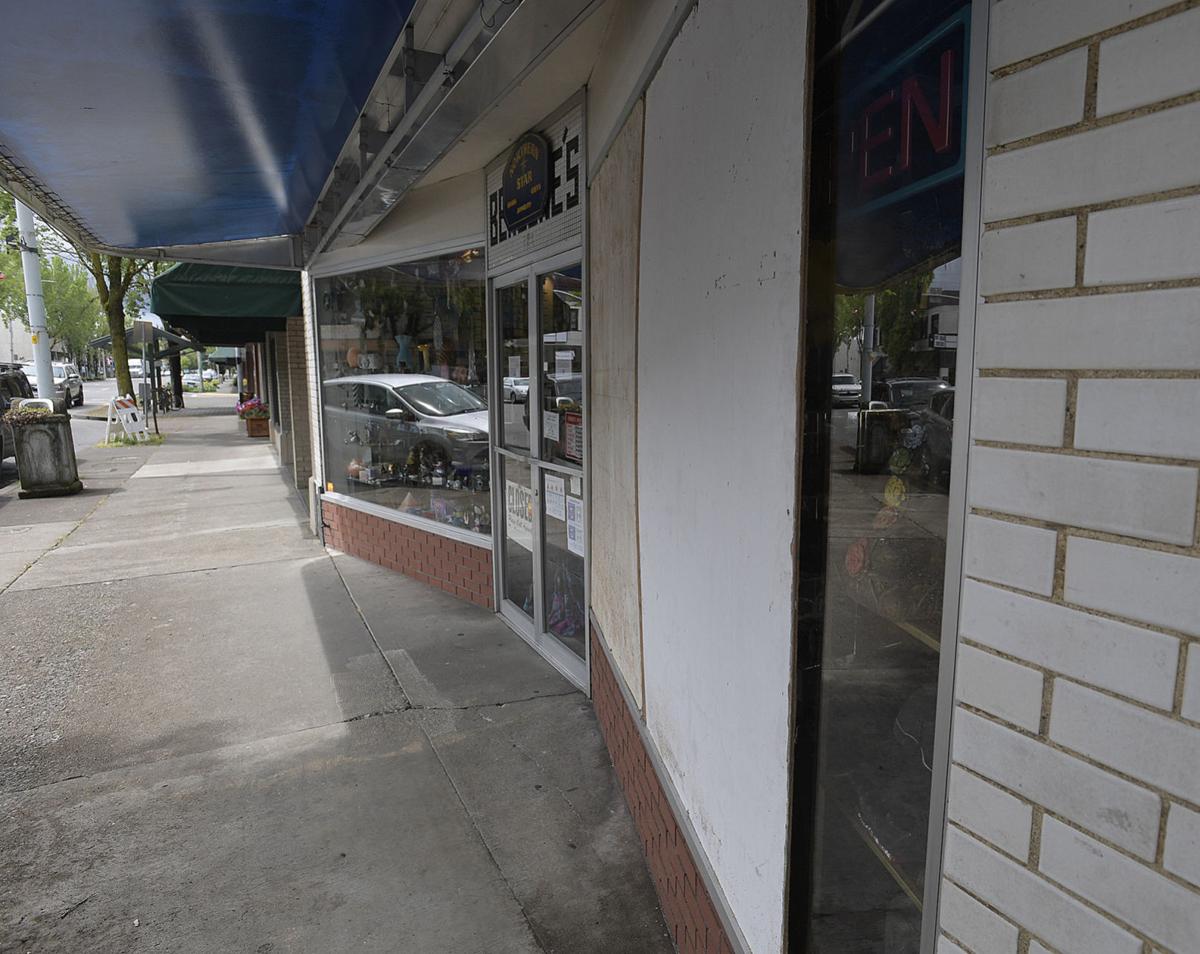 Northern Star was one of numerous businesses damaged in Sunday night's window-breaking spree.

A number of Corvallis merchants started their week cleaning up the mess from a Sunday night vandalism spree that left a wide swath of destruction throughout the downtown business district.

Large plate-glass display windows were smashed in at least 10 locations, while planter boxes reportedly were broken and picnic tables overturned at several sites.

“It looks like a bomb went off,” said Jennifer Moreland, executive director of the Downtown Corvallis Association. “I’m calling it a war zone.”

Complaints started coming into the Benton County Emergency Dispatch Center about 11:30 p.m. on Sunday, according to Lt. Joel Goodwin of the Corvallis Police Department, and a suspect was taken into custody.

Mathew Jareth Jason McGowan, 25, is facing multiple charges in connection with the incident. He is listed in court paperwork as having a Tigard address.

“If more people report damage, we might be able to tie those to him as well,” Goodwin said.

Goodwin said he was unaware of a possible motive for the destruction.

For local merchants hoping to get back to business as usual after two months of coronavirus-related restrictions, it was a rude awakening.

“I got a phone call about midnight (Sunday) night,” said Carmyn Washington, manager of the Runway Fashion Exchange at 264 SW Madison Ave. “We had to come down and clean up the glass and try to close up the windows as best as possible.”

Washington said two of the store’s display windows — one measuring about 7 by 18 feet and the other about 5 by 11 — had been smashed. She didn’t have a precise damage estimate but said the cost would be “in the thousands, I’m sure.”

With no immediate access to lumber to cover the broken windows, Washington said she put up tarps to protect the store’s inventory until the building’s maintenance man could get the windows boarded up.

“I think we were done about 3 in the morning,” she said.

Just down the block at 219 SW Madison, a 5-by-8-foot window at Five Star Sports also was smashed. Owner Chris Smith learned of the damage when a police officer reached him by phone about 1:30 a.m.

After weeks of severely curtailed operations to comply with state business restrictions aimed at slowing the COVID-19 pandemic, Smith had just reopened his store to the public on Saturday.

“We’re not really flush with cash right now,” he said. “Then something like this happens, and my insurance deductible is a thousand bucks. It’s not going to be easy.”

Other businesses that reportedly had windows broken or sustained other sorts of damage include Flat Tail Brewery, Many Hands Trading Co., Northern Star, the Toy Factory and the Kid Shoppe. Windows also were broken at the Knights of Pythias Building and a vacant storefront that formerly housed the Golden Crane.

To help cover the cost of repairs, the Downtown Corvallis Association has set up a crowdfunding page online at https://www.gofundme.com/f/downtown-corvallis-needs-your-help.

During Monday night’s meeting of the Corvallis City Council, held by videoconference, City Manager Mark Shepard said the suspect was a recent arrival to Corvallis who had been living at a homeless camp near the BMX park just south of downtown.

“It’s very unfortunate that businesses that already are suffering and challenged by the pandemic were vandalized,” Shepard said. “I’m really sorry that this happened in our community. We will be looking at ways to assist the downtown association and Chamber of Commerce to help businesses with filing insurance claims and other issues.”

Nina and James Cassidy witnessed a portion of the rampage from their downtown apartment.

“I heard screaming and then glass shattering — I thought there was a fight,” Nina Cassidy said.

When she looked out her window, she said, she saw a screaming man walk up to the Clothes Tree and kick out a plate glass window.

“I had never seen anything like that,” she said. “I just screamed, ‘Stop!’”

But the man didn’t stop. According to Cassidy, she could follow the path of devastation by the sound of heavy objects being overturned and large sheets of glass breaking as the man went south on Second Street and then looped back on Third, where a number of other businesses were vandalized.

“It went on for a long time,” she said. “I couldn’t believe how much destruction was happening.”

Her husband, James Cassidy, said he considered trying to stop the man — until he saw just how violent his behavior was.

“I thought, ‘I’m not going to be a hero, because this guy is dangerous.’”

Cassidy said the outburst of vandalism might not have happened before the coronavirus pandemic forced downtown bars and restaurants to close their doors.

“Normally, there’s enough people around to deter this sort of thing,” he said. “(Now) it is kind of a ghost town around here at night.”

McGowan, the man accused of causing all the damage, was arraigned in Benton County Circuit Court on Monday on six felony counts of first-degree criminal mischief and one misdemeanor count of second-degree disorderly conduct.

He pleaded not guilty to all charges, according to court paperwork.

McGowan was being held Monday night in the Benton County Jail. He is scheduled to be back in court before Judge Joan Demarest on Thursday for a status hearing.

Linn and Benton counties have petitioned Gov. Kate Brown asking that businesses be allowed to reopen as early as May 15, but public health off…

The Corvallis Auction Yard is no more.

Religious institutions in unincorporated portions of Benton County can now be used for vehicle camping.

No new cases of COVID-19 in mid-valley

The Oregon Health Authority reported 24 new cases of COVID-19 and one new death from the disease on Thursday, all from outside the mid-valley.

Mid-valley elected officials are asking for Gov. Kate Brown’s approval to move into Phase 2 of the state’s COVID-19 recovery plan.

A new COVID-19 cluster has been reported at a Corvallis assisted-living facility.

HOPE board resumes its work

The Housing, Opportunity, Planning and Equity Advisory Board resumed its work Wednesday after a four-month coronavirus-induced hiatus.

The man arrested for destroying large display windows at a number of downtown Corvallis businesses in May will spend four months in jail.

Carmyn Washington, manager of Runway Fashion Exchange in downtown Corvallis, finishes sweeping up glass shards outside her the store. The resale shop was one of at least 10 downtown businesses that had windows smashed in an outburst of vandalism.

A display window at Five Star Sports was broken out on Sunday night.

A sheet of particleboard covers a broken window at the Clothes Tree on Monday.

Northern Star was one of numerous businesses damaged in Sunday night's window-breaking spree.