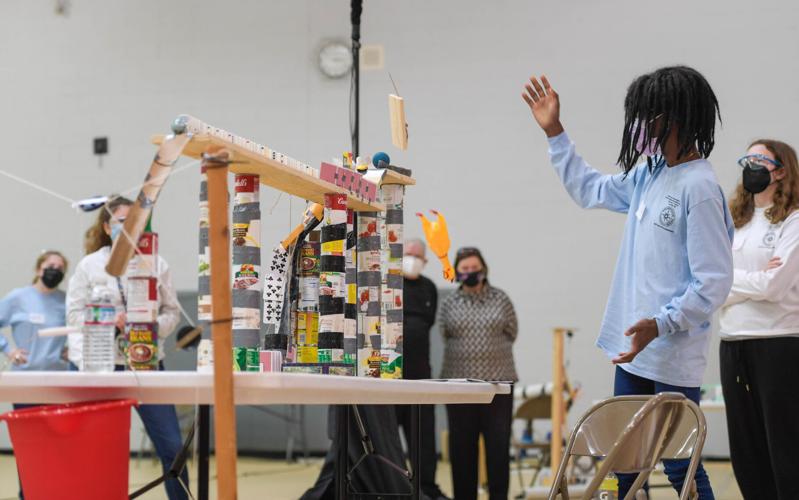 The Ashbrook Independent team sets off their Rube Goldberg device during the judging portion of the competition on Saturday, Feb. 12. 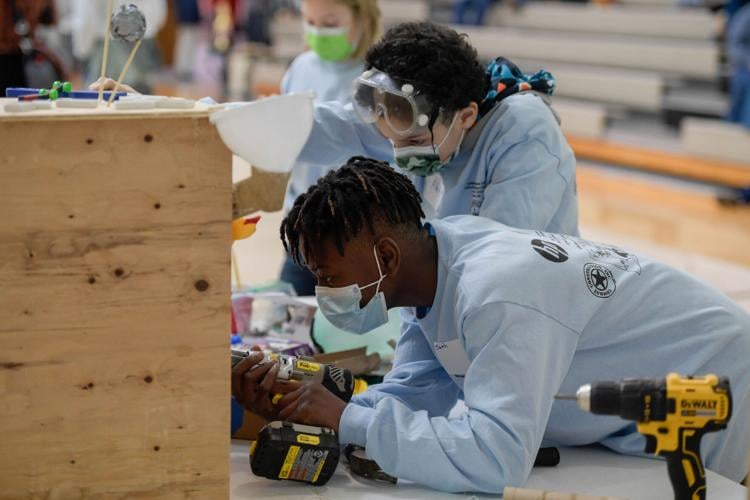 Issaiah Goodenough works on building his team's Rube Goldberg machine. Goodenough participated in one of the four teams from Kings Valley Charter School. 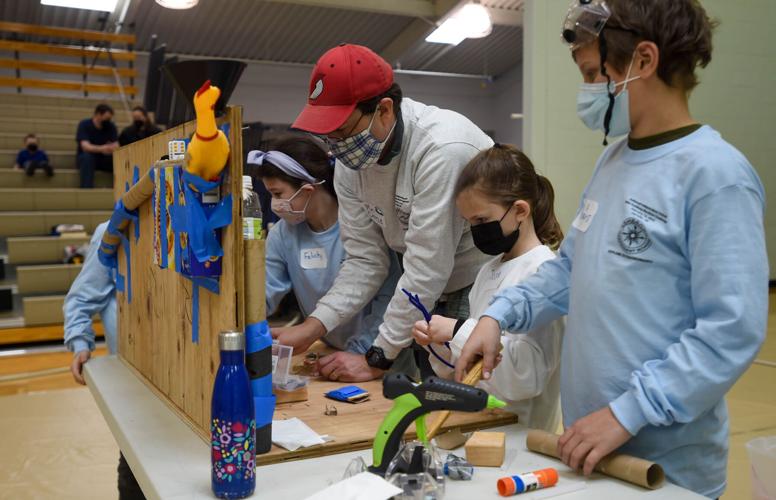 Teams had three hours Saturday morning to construct their machines. 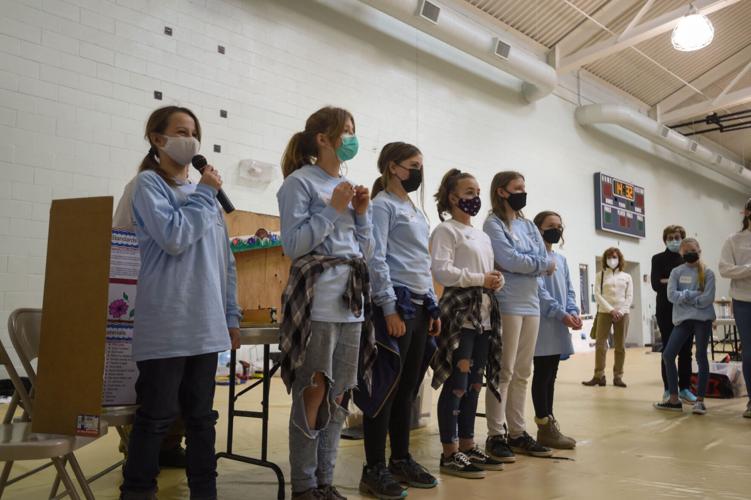 Teams then presented their creative process and tested their machines. 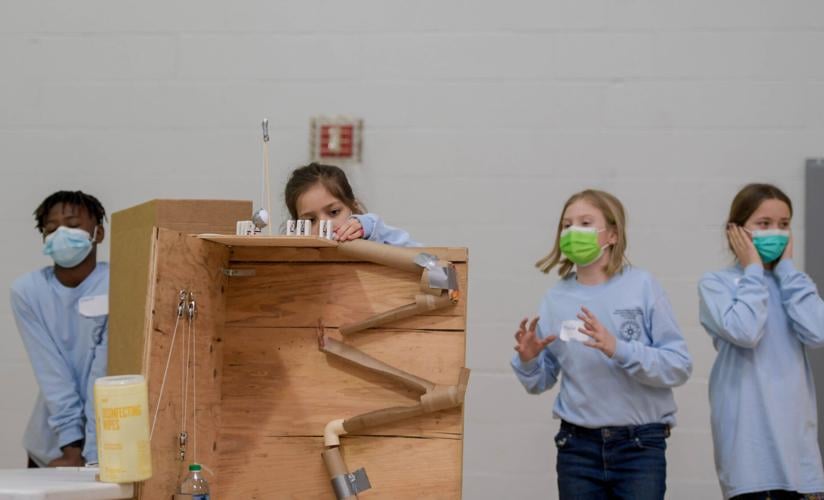 Quriea Rangel-Rivera sets off her team's Rube Goldberg machine during the judging portion of the day. 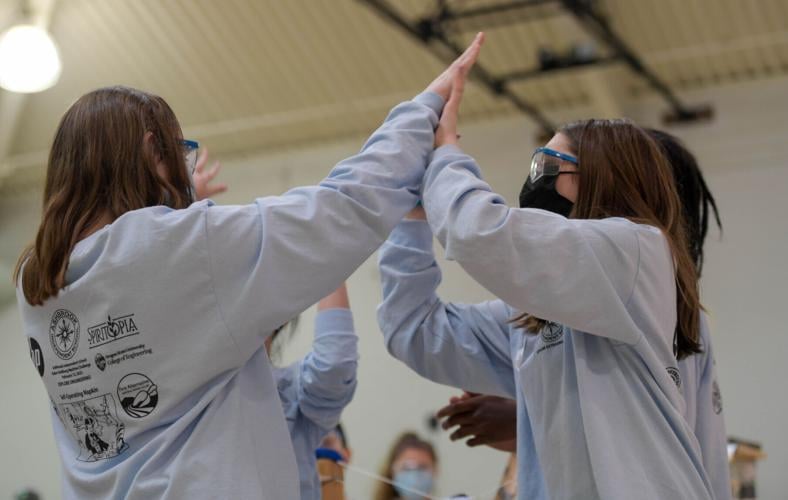 Rivers Albright, a Philomath 6th-grader, pushed a loaded rat trap into position beneath a row of dominoes, next to a claw hammer stood on end and tipping precariously over an aluminum can full of golf balls.

“How is the hammer going to work like that? It needs to go sideways,” she said.

“We tried it that way,” Rivers said.

But Maryam’s suggestion worked, and The Sanitation Machine clicked and thumped as marbles rolled down ramps and falling plastic tiles collected in the base of the crude, 5-foot wood-and-cardboard contraption.

SNAP. The students clapped their hands to their ears as the rat trap slammed closed and curious faces from nearby teams swiveled to catch a glimpse.

Their intentionally complex design was among eight entered in the first-ever Rube Goldberg Challenge at Ashbrook Independent School in Corvallis, where middle-school students from Junction City to Sheridan vied for least-efficient to squirt a slug of hand sanitizer onto a paper towel.

Jannet Kohanek, who teaches 4th- and 5th-graders at King’s Valley, found the invitation cast aside in her school’s copy room, she said. The timing was perfect.

She said she took on science lessons in the fall and wanted to build a Rube Goldberg device in her classroom.

“I thought, what! This is our chance,” she said.

Kohanek ended up with four. Tools and scrap wood filled her classroom and she taught math over the contraptions in the weeks leading up to the competition.

Ashbrook’s team developed a machine that would send a toy car and marble to activate a pulley that lands a weighted bucket on sanitizer. Ideally, the machine would squirt the sanitizer without human intervention to score points with the competition’s judges.

But student teacher Nikkole Duitsman said early in the project, students repeatedly redesigned their project after picking weights too heavy for the contraption. They broke a lot of buckets, she said.

Now, on competition day, the pulley system needed troubleshooting, the team had just run out of duct tape, and their rat trap wouldn’t snap closed.

“They have a problem where their ball doesn’t roll and the car falls off,” Duitsman said.

They had one hour before judgment and they hadn’t even made a dry test run, let alone squirted their sanitizer.

Eesa Duerksen, a seventh-grader, waved her arms and sighed at another failed attempt to get rolling objects down a sloped track.

“We’re running out of time!” she said.

Ashbrook head of school Chris Schoberl said all teams started with similar constraints, materials and team stipends from local business sponsors. Teams had to incorporate a mystery item into their build, revealed at the competition.

Every job that an engineer walks onto has unknowns — unanticipated problems that must be solved, Schoberl said.

“This year, it’s a rubber chicken,” he said.

Schoberl said the machines teach high concepts from engineering, math and science. But students have fun and engage with the concept in person.

Even if teachers don’t tell middle-schoolers this is physics, kids get out of the project having modeled transfer of energy, Schoberl said.

“Every single one of the kids gave up a Saturday to do engineering and mathematics,” he said.

At a nearby table, students building a machine they've dubbed The Squirter collapsed to their knees, holding their heads and yelling. Time was ticking and they'd yet to get the contraption to work.

Kohanek said her students had to read texts, analyze designs, and interpret what they had learned in their own concepts. A chance to practice literacy, critical thinking, creativity, problem solving.

“Here it is: Look at this,” Kohanek said.

There also was teamwork and project management. Her teams had to read text, analyze designs, interpret what they had learned as their own concepts.

The Unstoppables, a King's Valley team of 4th- and 5th-graders, logged 39 failed attempts. Then, earlier this month, success.

“When they got it to run, everyone cheered. Not just their team, but the room exploded.”

State Department says don't use Uber in areas around Cancun

State Department says don't use Uber in areas around Cancun

The Ashbrook Independent team sets off their Rube Goldberg device during the judging portion of the competition on Saturday, Feb. 12.

Issaiah Goodenough works on building his team's Rube Goldberg machine. Goodenough participated in one of the four teams from Kings Valley Charter School.

Teams had three hours Saturday morning to construct their machines.

Teams then presented their creative process and tested their machines.

Quriea Rangel-Rivera sets off her team's Rube Goldberg machine during the judging portion of the day.