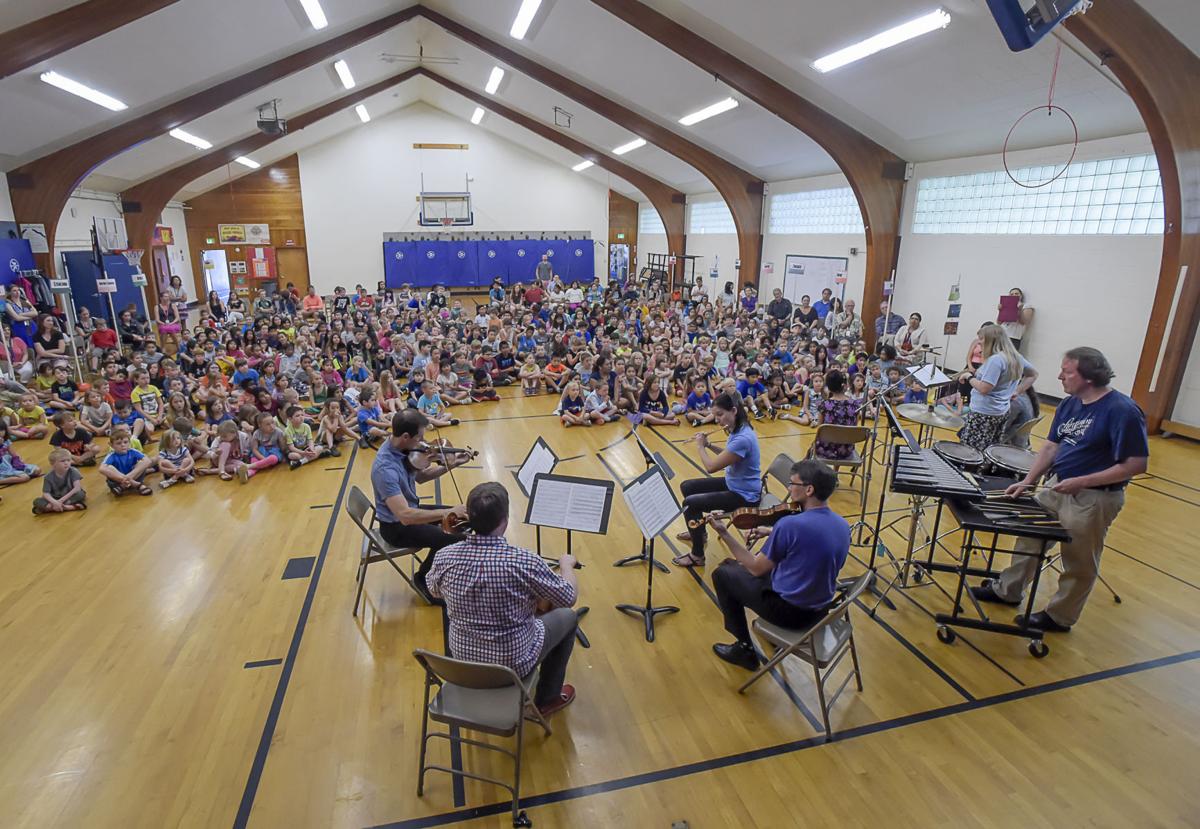 A group of Chintimini Chamber music Festival musicians performed "The Emperor and the Nightingale" for students at Lincoln Elementary School on Monday morning. 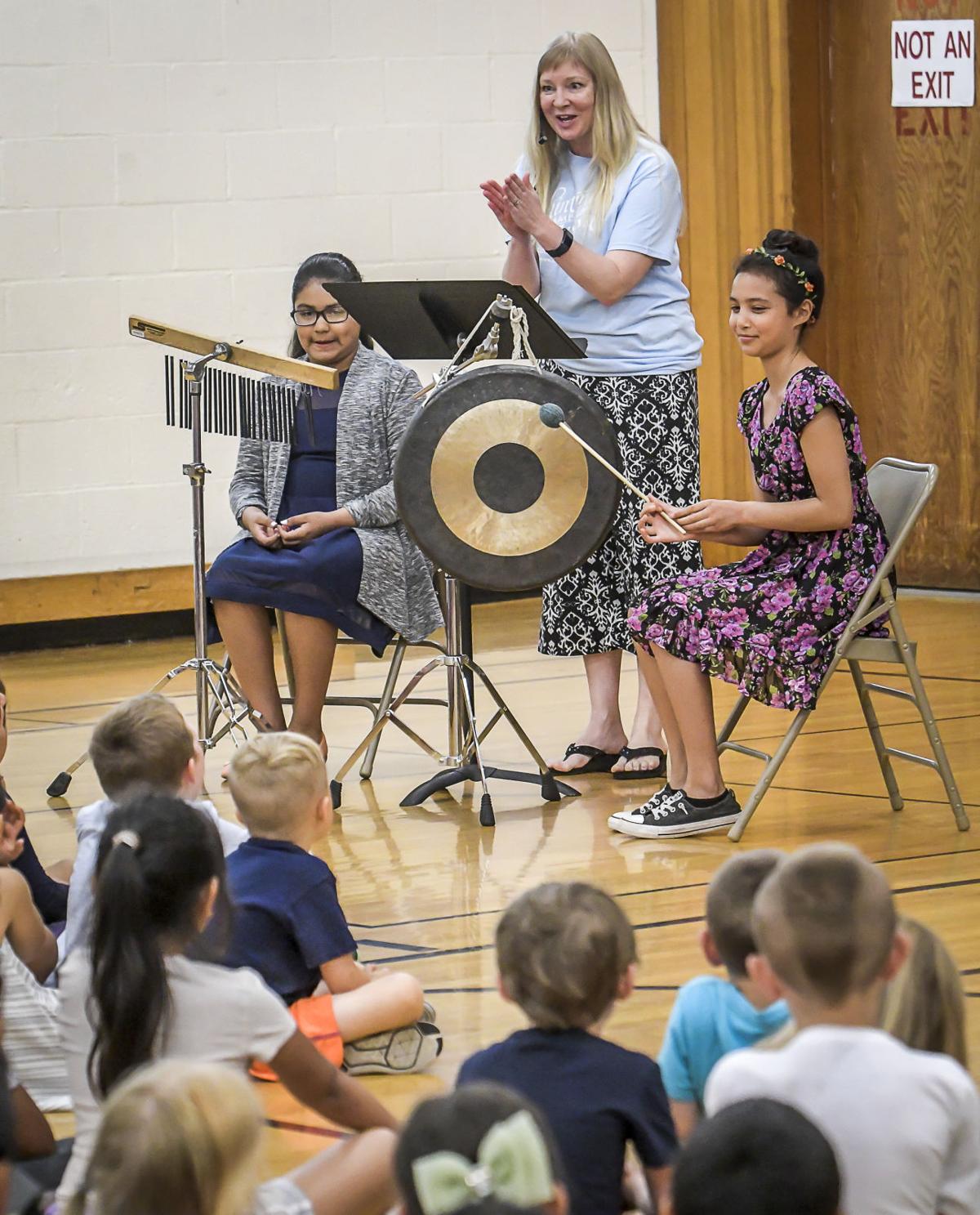 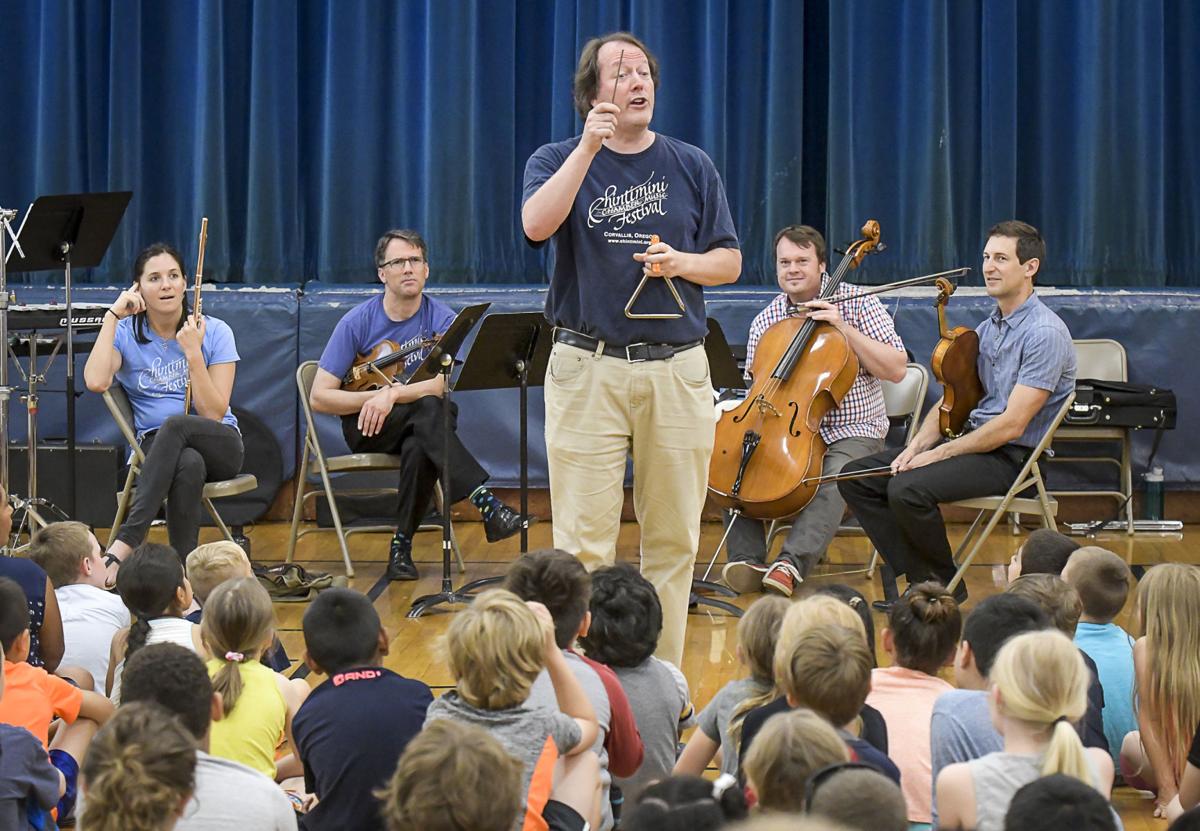 Bob Brudvig, one of the Chintimini Chamber Music Festival musicians, describes his percussion instruments before performing "The Emperor and the Nightingale" for students at Lincoln Elementary School on Monday morning.

The students at Lincoln Elementary School were reasonable attentive as the first few Chintimini Chamber Music Festival performers introduced themselves and their instruments before performing Monday morning at the school.

But it was percussionist Bob Brudvig who hooked them.

The students burst into excited chatter when he played a bit of “Under the Sea” on the glockenspiel, and by the time he played a march on a drum, the kids were dancing in their seats and air-drumming themselves. Brudvig needed to sound a gong to get their attention back.

The introductions were part of a performance of “The Emperor and the Nightingale,” which featured two Lincoln students playing the gong and wind chimes.

Erik Peterson, Chintimini’s artistic director, said the idea for the performance came about after he realized snow days would extend the school year in Corvallis by a week. That meant students would still be in the school during the time when the festival had planned for a number of kid-friendly performances in Benton County libraries.

That extra week, Peterson said, gave the musicians a chance to share what they do with students who might not attend their library performances.

“I knew we could reach more kids and share music,” he said.

Chintimini musicians will perform “The Emperor and the Nightingale,” at 10 a.m. today at the Monroe branch of the Corvallis-Benton County Public Library, and again at 10 a.m. and 4 p.m. Wednesday at the downtown Corvallis branch of the library. The piece combines songs and a narrated story.

“The story draws (kids and adults) in and the music enhances the story,” he said.

And, he said, the performances give many kids their first exposure to classical music.

“You never know. This could be the thing that makes them decide to play that instrument,” he said.

Emma Oxenhandler and Gaby Vasquez, both 11-year-old fifth-graders at Lincoln, were the students who helped out by playing the gong and wind chimes.

Gaby said when she was asked to help out, she thought it would be for a chore such as moving instruments.

“I never thought we would play instruments in front of the whole school,” she said.

“I liked how all the instruments blended really well together, and each of them had a role.”

A group of Chintimini Chamber music Festival musicians performed "The Emperor and the Nightingale" for students at Lincoln Elementary School on Monday morning.

Bob Brudvig, one of the Chintimini Chamber Music Festival musicians, describes his percussion instruments before performing "The Emperor and the Nightingale" for students at Lincoln Elementary School on Monday morning.