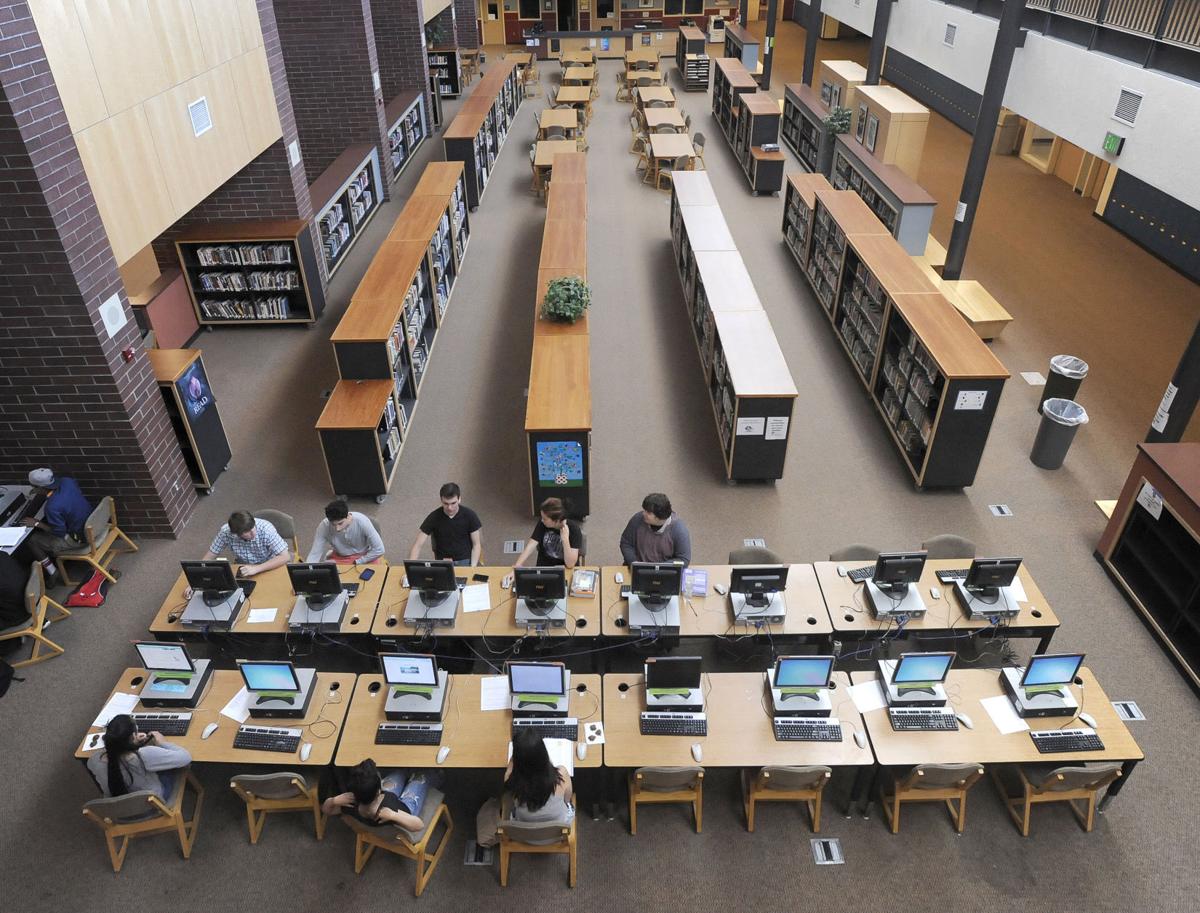 High school students recover credits during a summer school session in the library at Corvallis High School on Tuesday. 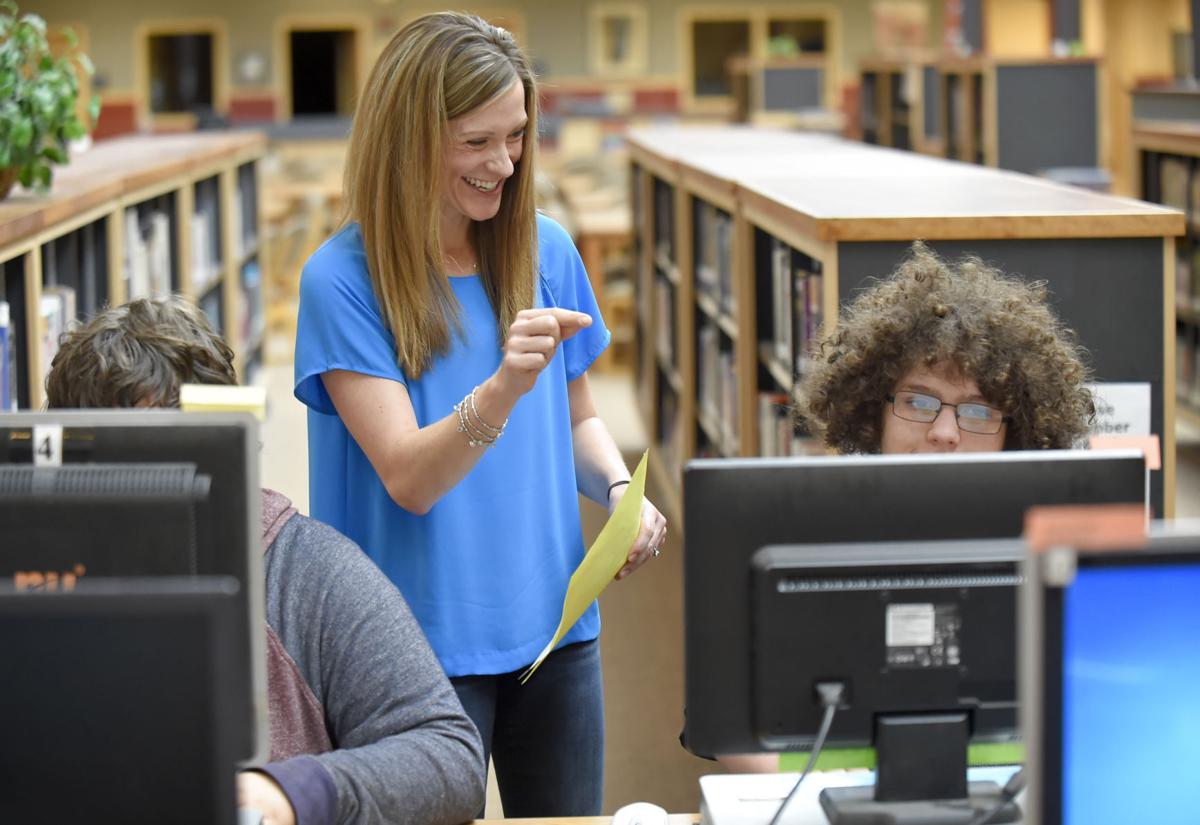 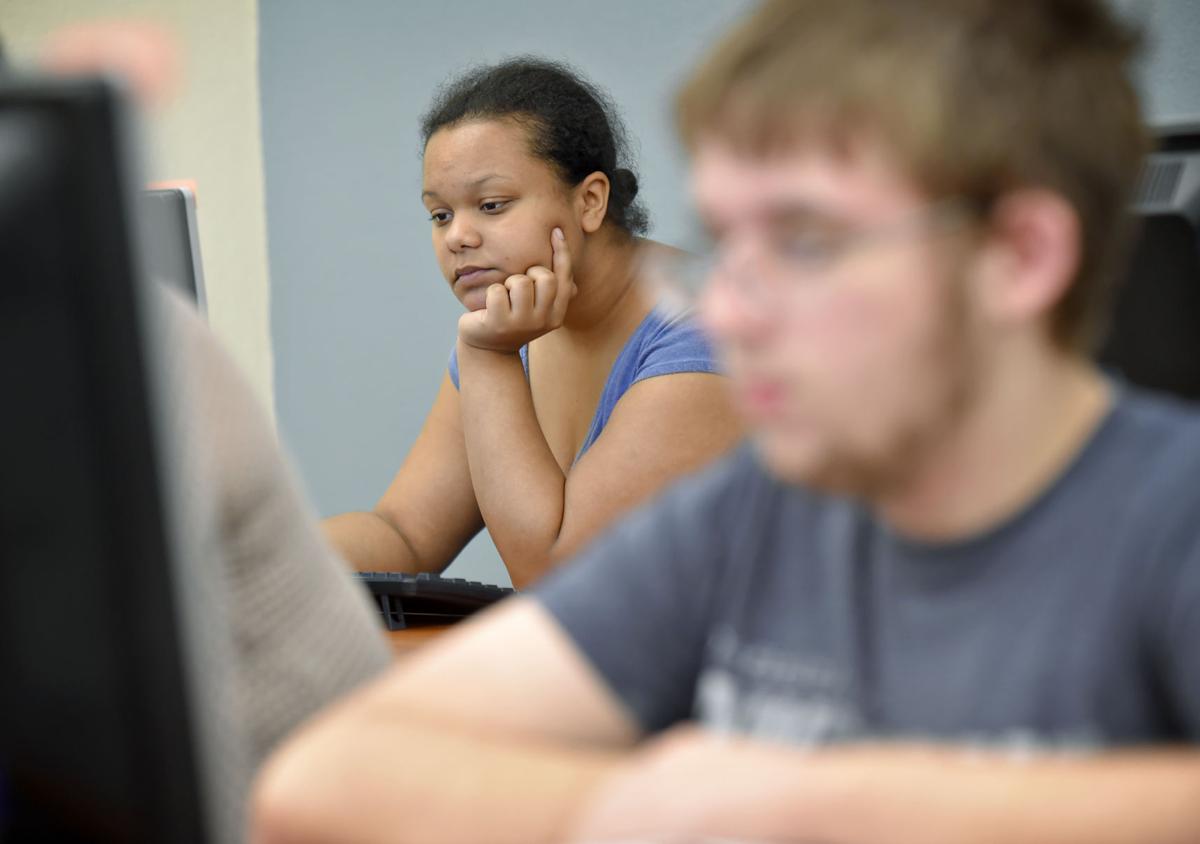 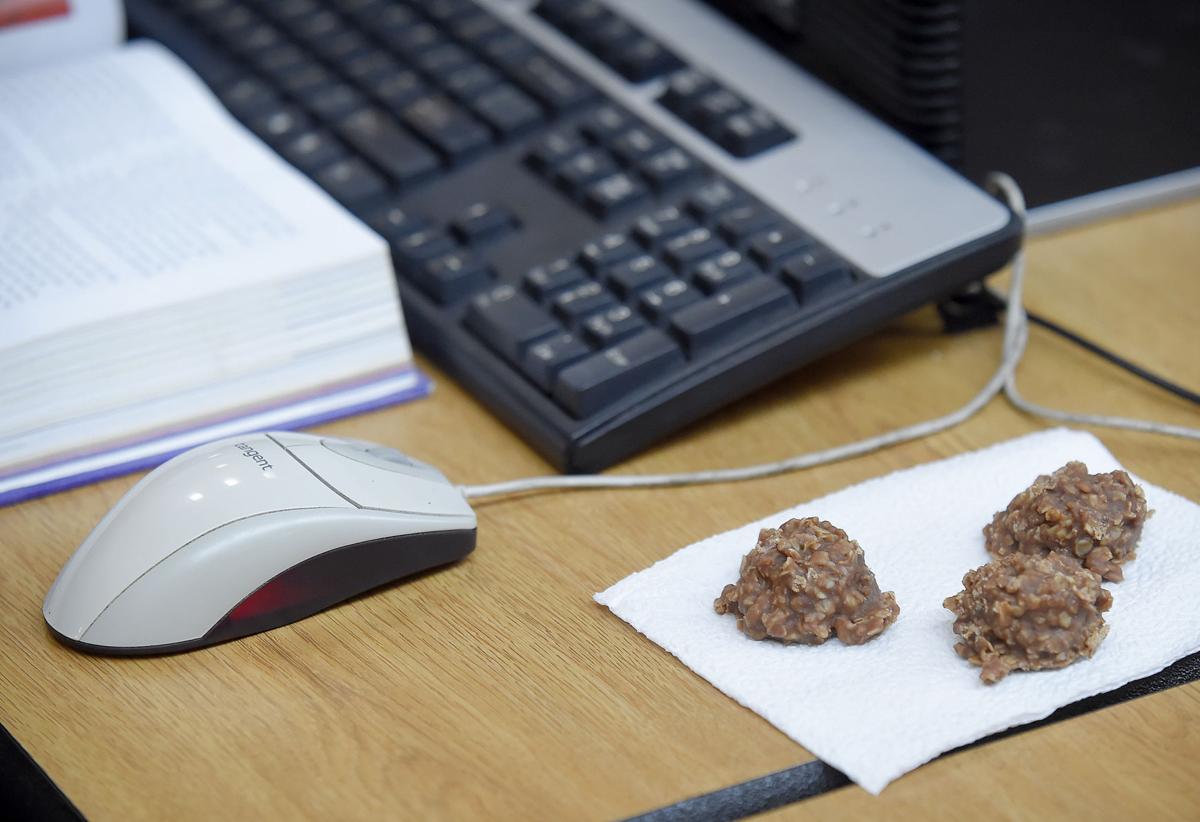 Teachers assistant Darcy Anglemier provided chocolate cookies for all the students that had completed 50 percent or more of their work by the halfway point of summer school last week at Corvallis High School.

College Hill High School student Keyadri Summerlin had a back-to-school experience last fall that is likely familiar to many students.

“I remember last year I finished German I. The next year I opened up my German textbook and I was like ‘What is this?’” she said last week.

Summerlin, a senior who is transferring to the alternative high school this fall from Corvallis High School, said that sometimes it can be easy to catch up, but not always.

“If there are concepts you weren’t really solid on before it takes a while getting them back,” she said.

Summerlin’s experience matches one documented in education research: students can lose educational progress during the idle summer months. However, local education experts say summer also gives opportunities for other kinds of learning that can not only stave off this summer slide, but get kids excited about education.

Summerlin herself is in a summer program that is aimed at doing just that: this year she is participating in the Corvallis School District’s summer credit recovery program, which is held from late June to late July.

In the program, which is located at Corvallis High, students from all three of the district’s high schools work in 90-minute sessions twice a week on online courses in subjects such as math, English, science and social studies. Teachers and teaching assistants are on hand to provide individual help with the lessons. Through the program, which is serving more than 100 students this summer, students can recover up to three credits.

Just over two weeks into the program, Summerlin had already recovered two credits for completing health I and health II courses and had moved on to consumer economics. She said she was ill during her freshman year, which caused her to fall behind in school. With the summer credits and the opportunity to recover even more at College Hill, Summerlin hopes to graduate on time, attend Linn-Benton Community College and eventually become a teacher herself.

Summerlin said if she becomes a teacher she’d encourage her students to do things like take community college classes over the summer so they can return to school ahead of where they were when they left, not behind.

“I would tell them to explore things they are interested in and if I had them, I would give them resources to help them do that.”

Kathleen Muravez, who has run the summer school program for the last three years, said she believes offering summer school has helped the district improve its graduation rate.

“This fills a significant need,” she said.

Muravez , who runs the Corvallis High School online program during the school year, said in her experience some kids who read a lot or take advantage of activities like the Corvallis-Benton County Public Library’s summer programs may not have much of an academic decline over the summer. For others, though, it’s not unusual for to experience a little summer slide.

Marin Langer, a Crescent Valley High School teacher who is teaching in the summer program, teaches both AP English and alternative education classes, so she sees a wide range in how quickly students can transition back into the school year.

“It’s less a decline in reading and writing than in academic skills and mindset,” she said.

She added that that the summer credit recovery program helps students maintain momentum in their education. The program can do this because it is structured differently than traditional classes. Students move through their own courses and assignments at their own paces and can use some of the assignments as a tool for exploring their own interests.

And for students who have not experienced much academic success, it gives them the opportunity for a fresh start, Langer said.

And success in a different environment can help to fuel a student's confidence going back into the school year.

“It’s really empowering to enter school further ahead than they were in June,” she said.

The summer credit recovery program and the district’s other summer programs, which also exist at the middle and elementary levels, are funded by the Corvallis Public Schools Foundation, which contributed $45,700 to the programs this summer.

Lynn Dierking, a professor and associate dean of research with Oregon State University’s College of Education, said there is no doubt that some children come back to school in the fall behind their peers.

She referenced a 2007 study in the American Sociological Review that examined students in the city of Baltimore and how they compared to peers in the more affluent Baltimore County.

She said the study showed that during the school year the low-income inner-city children actually had similar gains as their more affluent county peers and in some cases had even more academic growth. However, over the summers, the county students had access to enriching activities and continued to improve; those programs were not available to city students, and they ended up falling behind the county students.

“Each year they got a little further behind their peers,” she said.

Dierking and her colleagues at OSU are doing a five-year study in the Parkrose School District that is trying to develop programs to help prevent a decline in interest in science, technology, engineering and math fields. The study, which is funded by a $2 million National Science Foundation grant, is building on a previous five-year study Dierking and her colleagues did in the district, in which they observed a decline in interest in those so-called STEM fields between sixth and seventh grades.

However, she noted, not all of the students lost interest in the fields.

“The kids who maintain their interest are participating in things out of school,” she said.

She and fellow OSU education professor John Falk argued in a 2010 piece in American Scientist that the majority of Americans do most of their science learning through free-choice learning opportunities like museums, science centers, zoos, parks, organizations like 4-H and through educational media.

“I would argue there is an equity issue around these complimentary educational services,” Dierking said in an interview.

Dierking said students in lower-income families do not have access to the same enriching activities, but she said more school in the summer is not the answer — at least, not school in the same format as during the school year. She pointed to programs in Rhode Island, where summer school is heavy on activities and then students are tasked with writing about them after.

Instead of more traditional classroom time, she said the focus should be on an ecosystems of other educational organizations and sites, like the free-choice opportunities mentioned above.

Dierking and her colleagues' current study is attempting to help schools develop the systems to connect students to those resources throughout the year and over the summer. Additionally, she said, teachers could, for example, give the parents of a student interested in astronomy information so they could go out and stargaze, an activity that would not cost a lot for families to do. Or students could connect families to a local astronomy club.

it's an approach that could allow students in low-income families to stay intellectually active over the summer months.

“What they need are the same set of enriching activities children in the middle class and affluent families consider a normal summer,” she said.

So what can parents do over the summer to help prevent their children from losing ground over the summer? The educators interviewed offered suggestions.

In addition to the library, Muravez suggested families check out activities at other locations, such as The Arts Center in Corvallis and Oregon State University. She said the key is giving the kids a chance to explore things in which they already have interest.

“In summer the learning should have some excitement about it," she said. "Kids should be able to go a direction of their choosing."

In a blog, the U.S. Department of Education offered tips for parents to keep their children from going through a summer slide.

For elementary and middle school parents, the post advised visiting libraries and creating summer reading lists for children and giving rewards when kids complete them. The department also suggests that parents encourage kids to do arts-and-crafts projects. The website kids.gov has other ideas.

For high school students, the post recommends dedicating one day each week to keeping math and science skills fresh, potentially getting books with practice problems from local libraries. The post also recommends doing college preparation research, like researching financial aid. Part time jobs and volunteering are also recommended as ways to get experience for both personal and professional development.

Ryan Noss, Corvallis’ interim superintendent for the 2016-17 school year, agreed that knowing what children are passionate about and giving them opportunities to pursue it is critical.

Making sure kids continue to read and write is also important, he said.

Noss, who has two middle-school aged children himself, added that programs at the library or the summer programs offered by organizations like the Boys & Girls Club of Corvallis can be beneficial.

But he noted that activities don't need to cost money to be beneficial.

Kids are really inquisitive, he said, so encourage that — even if it’s just doing things like going out to look for bugs.

For a photo gallery of Corvallis School District's credit recovery program, see the online version of this story at www.democratherald.com.

High school students recover credits during a summer school session in the library at Corvallis High School on Tuesday.

Teachers assistant Darcy Anglemier provided chocolate cookies for all the students that had completed 50 percent or more of their work by the halfway point of summer school last week at Corvallis High School.