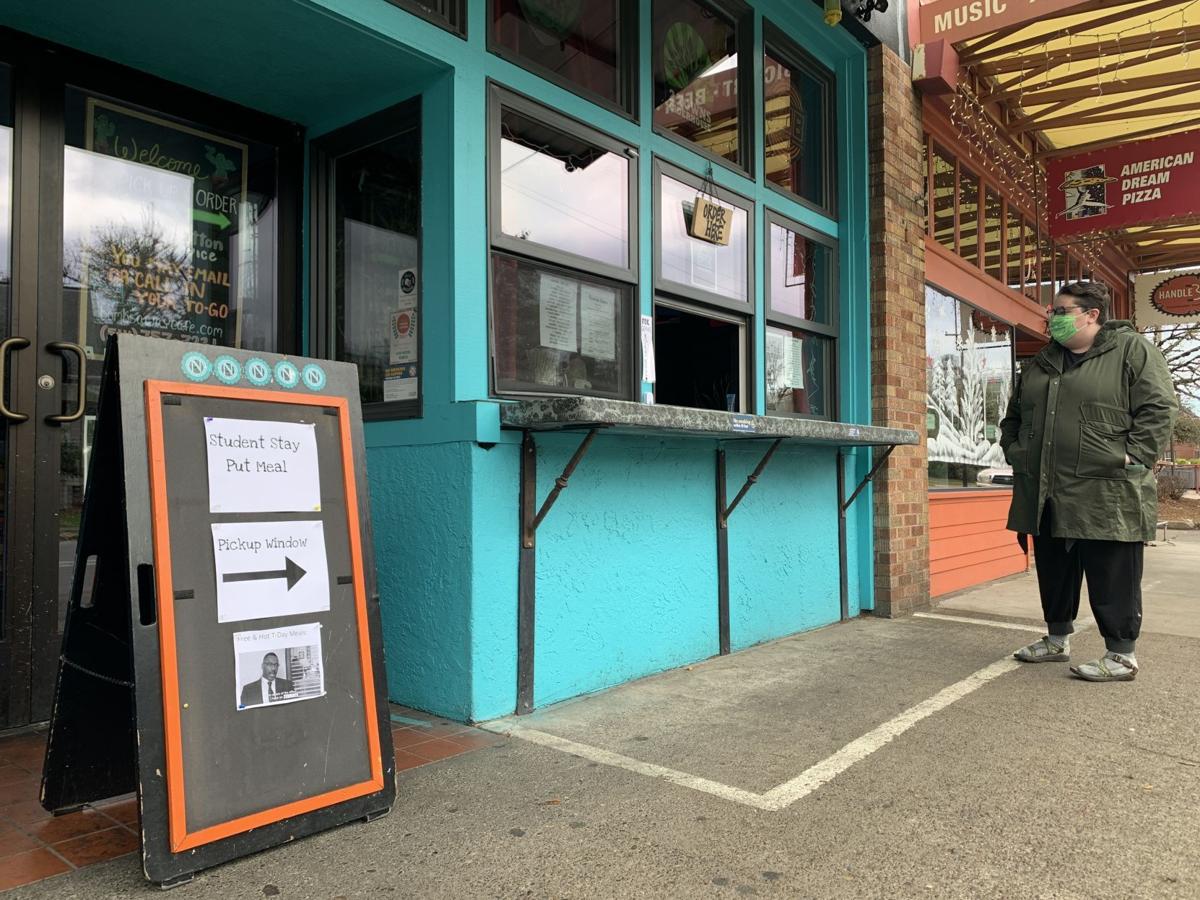 OSU student Audrey Smith, who stayed in Corvallis for Thanksgiving to social distance, waits for her free turkey dinner outside Bombs Away Cafe. 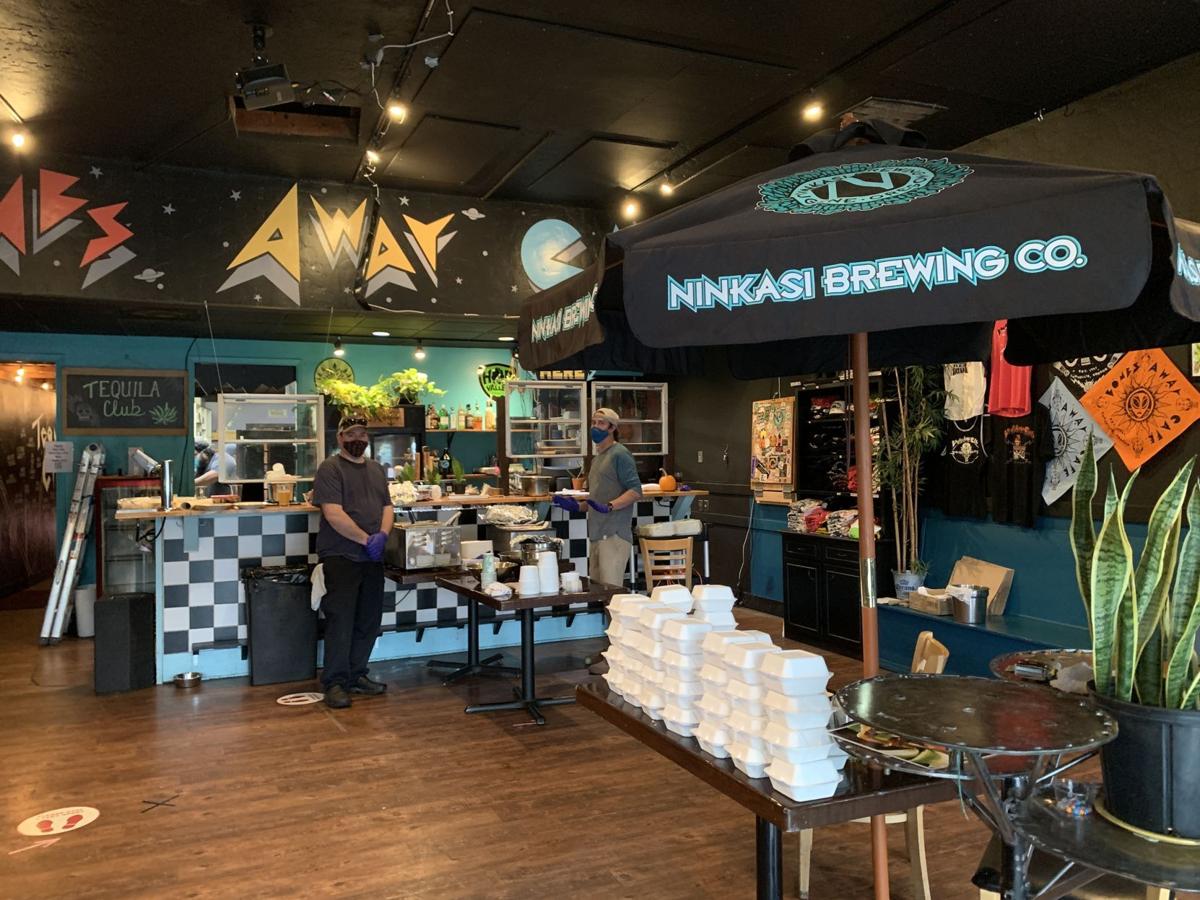 Employees at Bombs Away Cafe in Corvallis box meals to be handed out to OSU students on Thanksgiving.

Numerous Oregon State University colleges and local businesses chipped in to make sure students abstaining from family gatherings could have a Thanksgiving meal.

Around 450 hot turkey “Stay Put” dinners with all the fixings were handed out at Bombs Away Cafe and Tarntip Thai Cuisine, both located near campus on Monroe Avenue, on Thursday afternoon.

James Cassidy, a soil science and sustainable agriculture professor as well as the founder of the OSU Organic Growers Club, said he usually hosts a meal for “orphans” — those without a family to celebrate with — each Thanksgiving.

“For the last 10-15 years I have invited my student ‘orphans’ from my classes and the student farm to my Thanksgiving dinner and it has been a lifesaver for some and fun for all who don’t really have a place to go or can’t afford travel,” Cassidy said in an email to the Gazette-Times.

The increasing need nationally for social distancing, however, canceled this year’s intimate feast. So, Cassidy wanted to find a way to incentivize students to “stay put.”

He enlisted the help of It’s On Us Corvallis and OSU leaders to network and fundraise to feed lonely students in a more creative way.

IOU Corvallis is an effort launched by women in the Corvallis Sustainability Coalition to fundraise and purchase hundreds of meals at local businesses to be handed out for free to the public. Since the spring, they’ve made arrangements with over 40 restaurants, contributing thousands of dollars each to the small businesses.

“After sending out invitations through social media and internally at OSU, the effort quickly ‘sold out’ to capacity of our original goals within 12 hours,” Cassidy said. “We expanded the effort, added another restaurant and it 'sold out' again within eight hours. Clearly the need was great.”

Student Audrey Smith picked up two reserved orders of food from Bombs Away for herself and a friend.

“I haven’t seen my family in a year,” said the North Carolina native, whose father back home is immunocompromised. “It’s kind of nuts.”

According to Cassidy and IOU leader Aliza Tuttle, this meal was unlike the others in that it was funded by multiple OSU departments: the colleges of Pharmacy, Science, Forestry, Agricultural Sciences as well as Engineering, Earth, Ocean and Atmospheric Sciences, plus the Organic Growers Club and the offices of the President and Provost. Usually IOU sources its money from donations by community members.

Jeff Sawyer, owner of Bombs Away Cafe, said his taqueria has thrice been supported by IOU in these financially difficult times — once during the initial stay-at-home order, once during the September wildfires and now.

“All things considered, all the terrible things going on, you want to help somehow,” he said. “Do what you know how to do. Food is what we know how to do. Everybody wins in this situation.”

A charitable group is still going strong to keep people in Corvallis fed and local restaurants open during the coronavirus pandemic.

It’s On Us, a Corvallis group assisting with food security issues, has received an anonymous donation of $20,000 and has 10 days to match the grant.

It's On Us Corvallis is crowd-funding to fund restaurants to feed people in need during the coronavirus pandemic.

Mid-valley volunteers spend Thanksgiving day feeding their peers before themselves

This Thanksgiving holiday, some mid-valley residents opted to help feed their communities in lieu of sleeping in.

OSU student Audrey Smith, who stayed in Corvallis for Thanksgiving to social distance, waits for her free turkey dinner outside Bombs Away Cafe.

Employees at Bombs Away Cafe in Corvallis box meals to be handed out to OSU students on Thanksgiving.