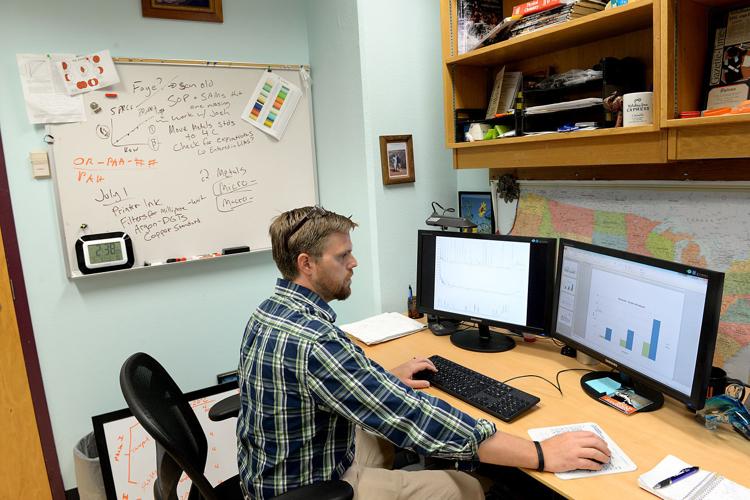 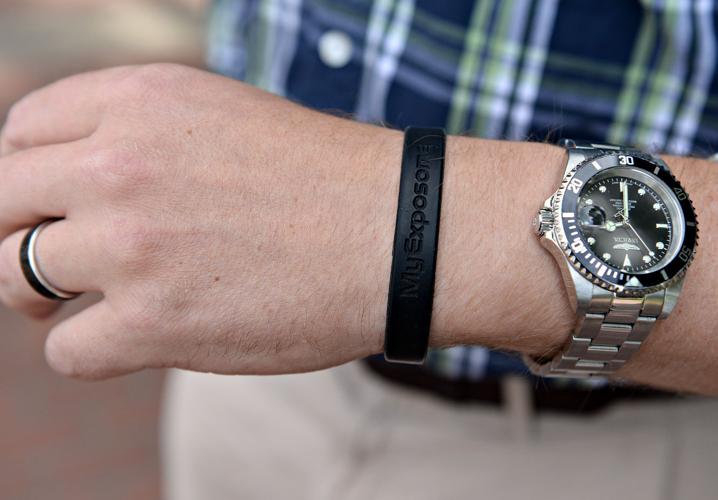 Oregon State University's Steven O'Connell wears a silicone personal monitor that absorbs chemicals, which can be sent to a lab to analyze what chemicals the wearer has been exposed to.

A Corvallis company is using technology developed at Oregon State University to help people understand what chemicals they are exposed to every day.

MyExposome’s product is a simple silicone wristband, similar to the ones commonly used to promote various causes, which people wear for a week so the bands can absorb environmental chemicals. Users then send the band to a lab, where it is analyzed for the presence of 1,400 different chemical compounds. The users then receive a personal report of chemicals to which they were exposed.

The researchers behind the company have already used the wristbands successfully in studies both locally and internationally to detect chemicals such as flame retardants and pesticides, and they are now hoping to bring the technology to consumers.

Steven O’Connell, a faculty research assistant at OSU who was involved in the invention of the bands, said he and a few colleagues began the process of starting the company in the summer of 2014, and have a patent pending on the wristband technology. Previous environmental chemical detection methods involved air samplers that were bulky and required fans to sample air.

He added that the company has been awarded a Department of Defense small business innovation grant, the first phase of which could be worth as much as $150,000 to the company.

And the company is now experimenting with consumer interest in the service through a Kickstarter campaign.

“We don’t know exactly what our markets might be so we’re going in every direction,” he said.

People who support MyExposome’s Kickstarter to the tune of $995 or more will get one of the wristbands to wear for a week and a special envelope to mail it into the company, which will have it tested at OSU.

O’Connell, who earned a doctorate in toxicology from OSU in 2014, said the company owners are not naïve about how prohibitive that price is for a consumer product.

“I’m not going to lie, it’s really expensive,’ he said.

According to O’Connell, the Kickstarter wouldn’t really make much profit for the company — most of the money in that figure would go to the costs of testing the wristbands.

“It’s more about getting the technology out of the lab, garnering interest and showing we can deliver a product that people want,” he said.

O’Connell said the costs of doing this kind of testing might go down as they scale the technology up, mentioning how the cost of sequencing the human genome has dropped dramatically since it was first done.

O’Connell said the wristband technology is being used in ongoing studies at OSU, and the company has already supplied wristbands to the Environmental Defense Fund, which used them for a study with around 30 participants. He said some of their potential future clients might be environmental groups, unions or government agencies, but they’d also like to get the wristbands out to a broader selection of the populace to have an understanding of what people are exposed to in their everyday lives.

“There is no other way you can get this kind of data,” he said.

In a promotional video for the Kickstarter, the company references studies that show 50 to 70 percent of chronic diseases are related to environmental exposures.

The company plans to share how an individual’s results compare to results in the populace at large, so that people aren’t being given information about their exposures without context. O’Connell said they don’t want people to be scared by benign chemicals to which they are exposed.

“What we do is provide as much knowledge as possible,” he said, adding that in his experience as he understands things better he becomes less afraid of them.

As of Sunday evening, with 21 days left to do on the Kickstarter, MyExposome had raised around $4,500 of its $50,000 goal. But O’Connell said they had other potential clients in the works, and viewed the Kickstarter as a way to judge consumer interest.

“The Kickstarter might work or not, but that tells us something,” he said.

To view the company’s Kickstarter and learn more about the chemicals they can detect with the wristbands, visit http://kck.st/1G65I4N.

Unlike in recent years, Benton County is experiencing an increase in many common respiratory illnesses, including the flu and respiratory syncytial virus, according to local health officials.

And what the newcomers are doing to prepare for their debut in January.

Oregon State University's Steven O'Connell wears a silicone personal monitor that absorbs chemicals, which can be sent to a lab to analyze what chemicals the wearer has been exposed to.