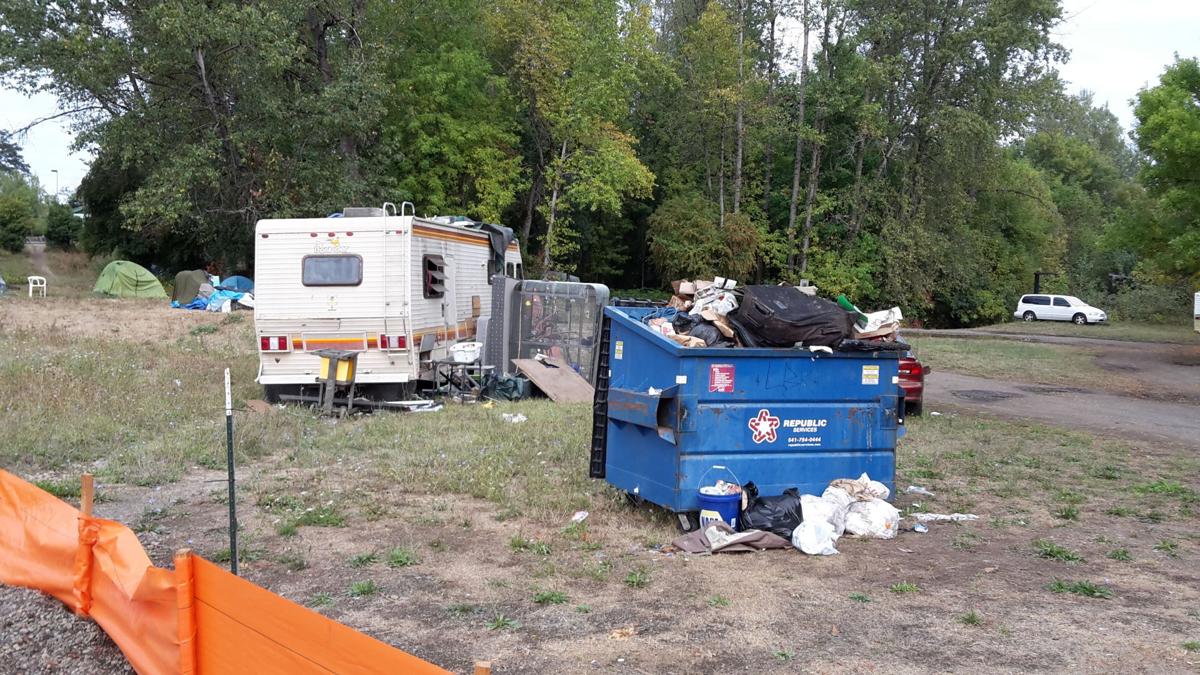 An overflowing dumpster is seen in September at a camping site in southeast Corvallis near the BMX park and the men's cold weather homeless shelter. The City Council directed the city to slow down its plans for posting and cleaning up homeless camps until alternative sites can be explored. 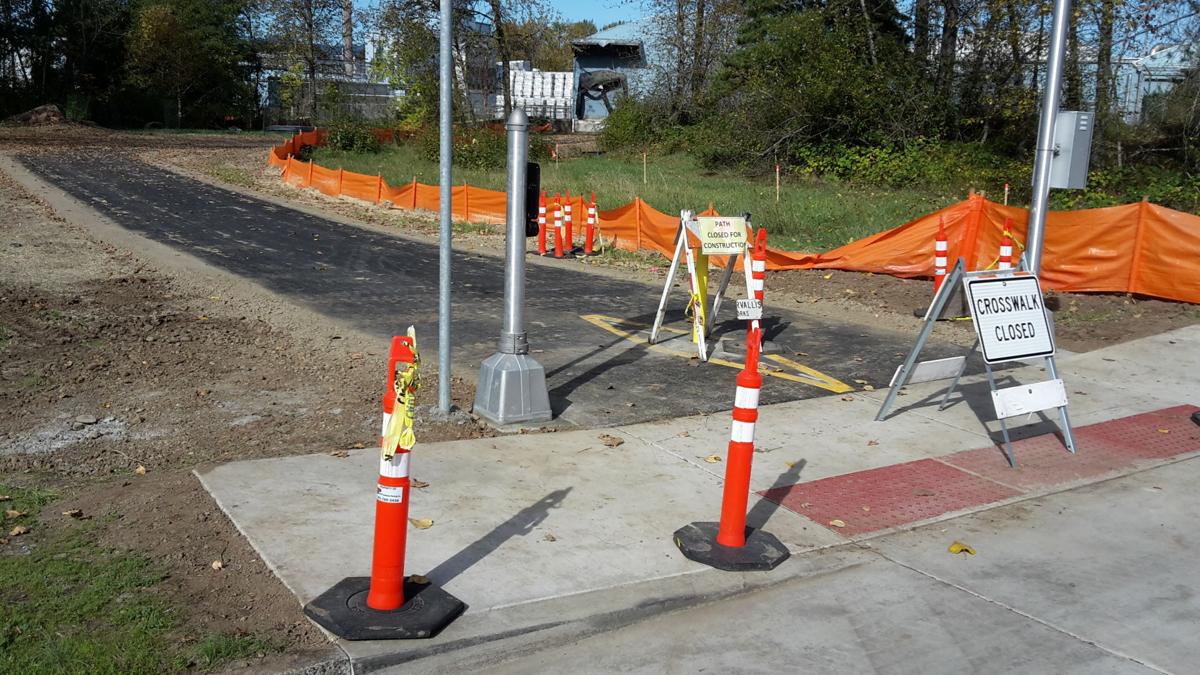 Here is a look at the new section of Corvallis' multiuse path from the Marys River at its termination on Crystal Lake Drive.

The Corvallis City Council has said an emphatic no to city staff proposals to resume posting and cleaning up of homeless camps on city property.

City-owned land is in the mix for such shelters or camps, although the motion put forward by Ward 6 Councilor Nancy Wyse with an amendment from Ward 2’s Charles Maughan indicated that the city should proceed with its priority postings and cleanups and report back to council on possible next steps.

The city staff report on the issue included a first-ever comprehensive inventory of current camps (see the website for the report). The inventory included at least 200 camps, although some locations, including Crystal Lake and Berg Park along the Willamette River, still have not been counted.

Also, the city did not do a census of the camps, many of which might contain more than one person.

The high-priority camp sites that will be posted in November include sites that have high fire or flooding risks and/or environmental challenges because they are in riparian corridors.

Included are Willamette River sites such as Riverfront Park, the Orleans Natural Area, Shawala Point and the east end of Western Boulevard, Marys River sites at Pioneer Park and Avery Park and camps alongside Dixon Creek near the Public Works compound.

Although the final vote was unanimous it was preceded by a series of amendments that passed or failed on 5-4 votes and a motion that was tabled before Wyse’s motion with Maughan’s amendment carried.

The city had initially called for a phased process of posting and cleaning up camps that councilors discussed at their Sept. 21 session. That plan called for actions within 30, 60 and 90 days, with the key change being the 60-day phase that would limit campsites citywide to within 50 yards of the men’s cold weather homeless shelter on Southeast Chapman Place.

City staff pulled back from those hard deadlines during its report Monday to the council, making the targets a bit more open-ended, but councilors still called for change.

“I still have 101 questions left,” said Wyse, “but this is a way for people to sit down and hash out what will work and move forward with something.”

Maughan was a bit more emphatic.

“I’m frustrated,” he said. “We were told by city staff that the plan just puts us back where we were before COVID. But COVID is still around. We’re in a crisis here.”

Shepard cautioned that what the work council has directed is not in the city’s work plan and that he plans to advise the council what initiatives likely will be delayed or canceled because of the homeless effort. He also noted that some of the camps in the city inventory, which was compiled by city staff in the past few weeks, are not on city property and thus not subject to the council action.

“Some are on railroad property and some are on ODOT property,” Shepard said. “They might move ahead (with cleanups) at their own pace.”

In other council action:

• Councilors agreed on a public participation that will help them reach a decision on naming a new section of the multiuse path between the Marys River and Crystal Lake Drive for a cyclist who died on Highway 99W in 2018.

The city plans to release a survey on the issue to residents and councilors also will schedule a public hearing to gather information to make a final decision, although councilors clearly favor the suggestion to call the section the Eric E. Austin Memorial Bypass.

Austin, then 32, died after a collision in a crosswalk near the First Alternative Co-op. His father, Bruce, who has been a strong advocate for bicycle and pedestrian safety since the incident involving his son, suggested the change to city staff in a Sept. 27 letter to interim Public Works Director Greg Gescher.

Austin’s death was felt deeply by the Corvallis community, and his father’s letter drew strong support from the community as well as councilors Maughan, Hyatt Lytle (Ward 3) and Charlyn Ellis (Ward 5).

• The Corvallis Police Department and its 9-1-1 emergency service operation received a statewide honor for the countywide taxing district that voters passed in November 2019 that led to increased staffing and better equipment for the dispatch center.

Representatives of the Oregon Chapter of the Association of Public Safety Communications Officials appeared remotely at the meeting to note the commitment to excellence award for the department.

The taxing district proposal was first floated by then Capt. Jonathan Sassaman in 2007. He continued to push for it when he became chief in 2012, visiting every town and fire district in the county to seek their support before the 2019 vote.

Sassaman, who retired June 30, was on hand for the presentation as was current Chief Nick Hurley, who supervised the 9-1-1 center during the final years of Sassaman’s tenure. Also present was the center’s long-time manager Scott Haberkorn.

See the website for the staff report for the homeless camp discussion, including the spreadsheet inventory of current camps

Six-plus months into his sixth year as city manager of Corvallis, Mark Shepard is working through a routine period dominated by the coronaviru…

Story Next Door: Ballard joins the fight against homelessness

Marion Ballard’s roughest moment came on a rainy night last fall. He was homeless, camping under a tarp in the Timberhill area of Corvallis. N…

City to force RV and car campers out while adding amenities

Homelessness was a growing crisis in this country long before the pandemic hit, but COVID-19 has made the issue even worse — and harder to ignore.

An overflowing dumpster is seen in September at a camping site in southeast Corvallis near the BMX park and the men's cold weather homeless shelter. The City Council directed the city to slow down its plans for posting and cleaning up homeless camps until alternative sites can be explored.

Here is a look at the new section of Corvallis' multiuse path from the Marys River at its termination on Crystal Lake Drive.