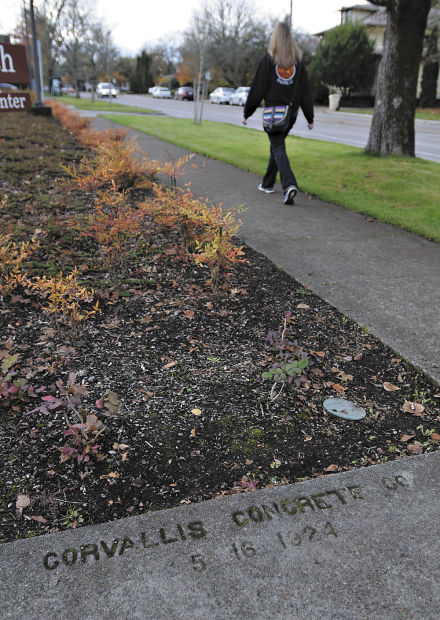 A pedestrian strolls past a historic sidewalk marker from 1924 at the corner of Ninth Street and Monroe Avenue on Thursday morning. (Amanda Cowan | Corvallis Gazette-Times) 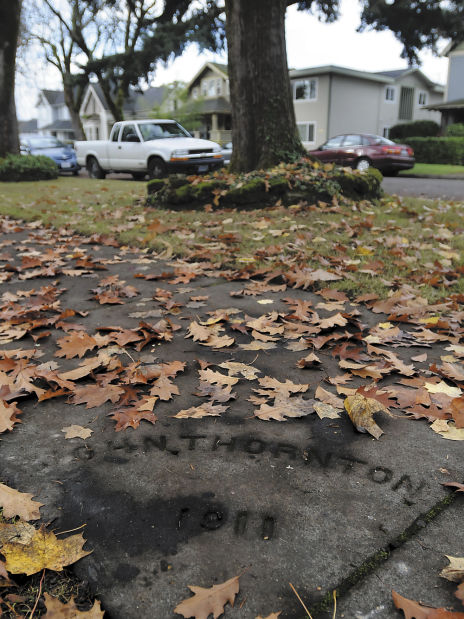 A historic sidewalk marker from 1911 is visible on the corner of Northwest Eighth Street and Northwest Van Buren Avenue on Thursday morning. (Amanda Cowan | Corvallis Gazette-Times) 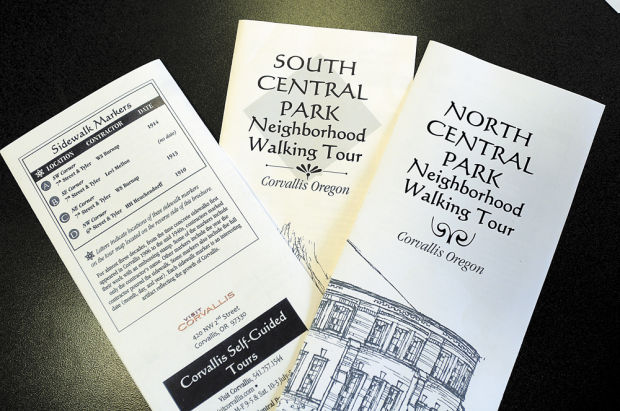 There are more than 200 such stamps citywide, noted volunteer Doug Eaton, who conducts guided neighborhood tours each May.

The stamps were used by contractors from 1906 to the 1930s to both date their sidewalk work and identify themselves as the creators.

The tour brochures were produced by Eaton, who writes the scripts, Ross Parkerson, who handles the drawings and M’Liss Runyon, who does the design work.

“We were very lucky to have her on our team,” said Eaton of Runyon, who is a graphic artist at Linn-Benton Community College.

Eaton gave credit to Parkerson for having the curiosity that helped get the idea going.

“He’s a walker. He walks all over town,” Eaton said. “And he has been fascinated with them (the sidewalks stamps) for a long time.”

The goal of the project, Eaton said, is to help tell stories of Corvallis’ history.

“Each sidewalk marker is an interesting artifact reflecting the growth of Corvallis,” he said.

Included is the tale of a marker at the corner of Southwest Adams and Seventh Street, near Eaton’s house. When the city redid the sidewalks to make them more wheelchair-friendly they were confronted with a slab that noted “Seventh St.” They kept the slab and just built the new sidewalk around it.

“The city has been very good about preserving sidewalk stamps,” Eaton said.

Eaton also talked enthusiastically about some of the stamps that will be included on the spring tour. Such as the image of the gun embedded in the sidewalk on Southwest Second Street. But that’s a story for a future tour.

“Sometimes folks on the self-guided tours will thank me when I’m out mowing the law or working the garden,” Eaton said. “A couple from Hillsboro stopped recently to ask questions about the house. Not a lot of people know these tours are available.”

Brochures for self-guided historic walking tours of Corvallis are available at Visit Corvallis, 420 N.W. Second St. Call 541-757-1544 or go to www.visitcorvallis.com for more information. You can download and print the maps from http://visitcorvallis.com/things-to-do-corvallis/things-to-do-guide/?cn-s=&cn-cat=72. Guided tours are available in May during Historic Preservation Month.

People from Corvallis, Eugene, Lebanon, Sweet Home and everywhere in between gathered at the Benton County Courthouse on Saturday morning to p…

An excavator stuck on the Ellsworth Street Bridge snarled traffic for more than an hour Tuesday morning, delaying commuters' drive into Albany.

A Sweet Home man was killed in a crash west of Lebanon on Sunday night, according to a news release from the Oregon State Police.

Albany district invited the public to speak, but after epithet, school board member walks out

Greater Albany Public School's so-called listening sessions were supposed to quell emotions, to be a safe space for people to voice questions …

A pedestrian strolls past a historic sidewalk marker from 1924 at the corner of Ninth Street and Monroe Avenue on Thursday morning. (Amanda Cowan | Corvallis Gazette-Times)

A historic sidewalk marker from 1911 is visible on the corner of Northwest Eighth Street and Northwest Van Buren Avenue on Thursday morning. (Amanda Cowan | Corvallis Gazette-Times)