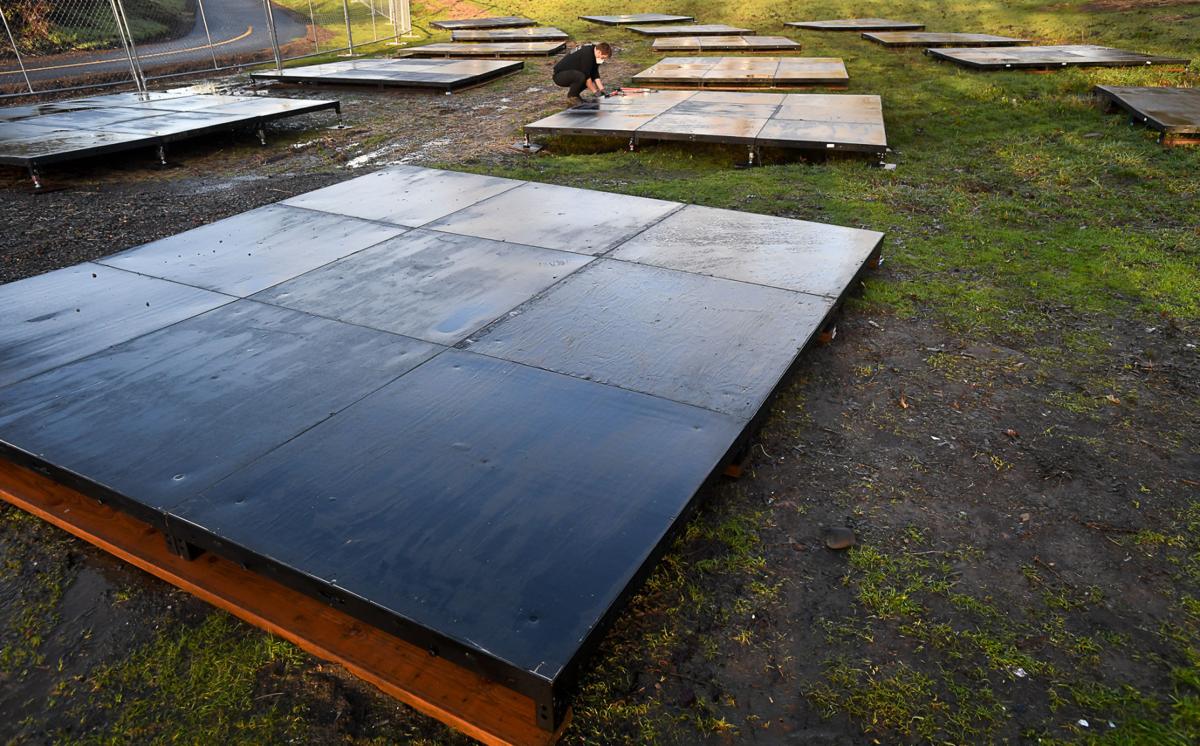 John Froelich with Special Occasions secures wooden tent platforms at the new managed camp behind the men's shelter in Corvallis on Wednesday morning. 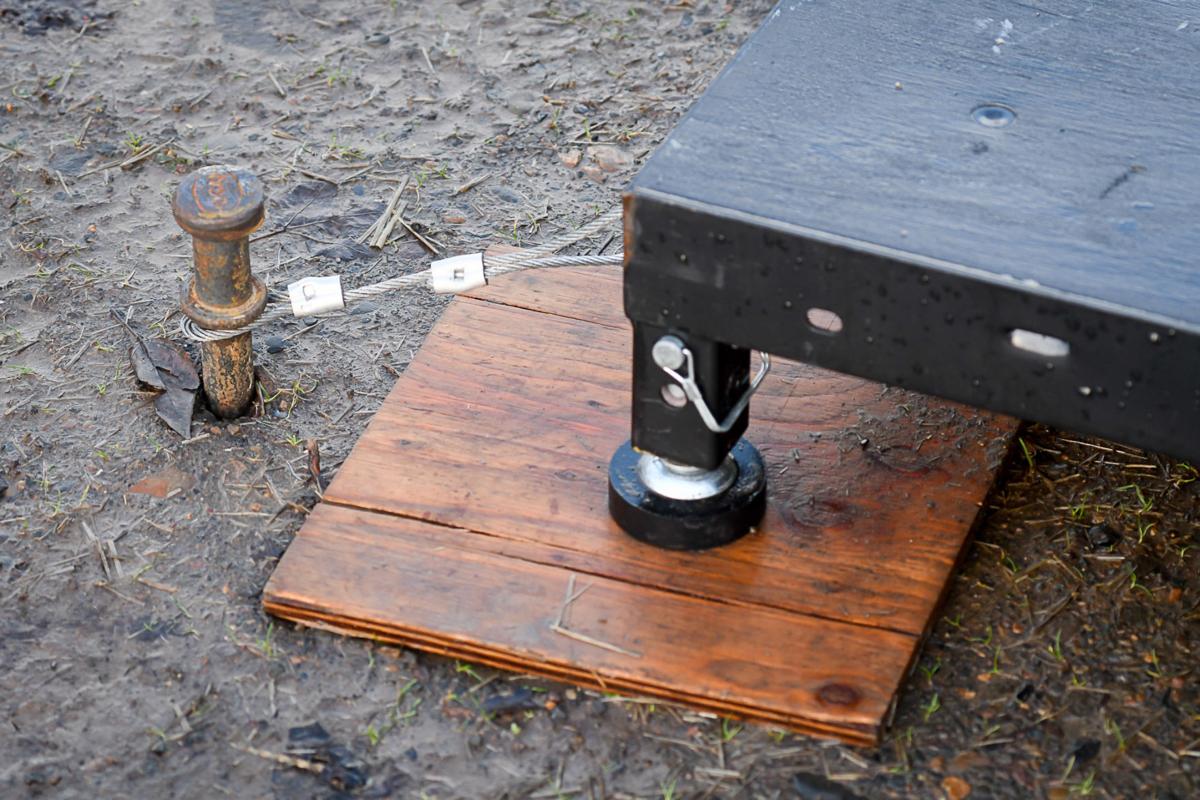 Four-foot-long stakes are used to secure wooden platforms at the managed camp in Corvallis. 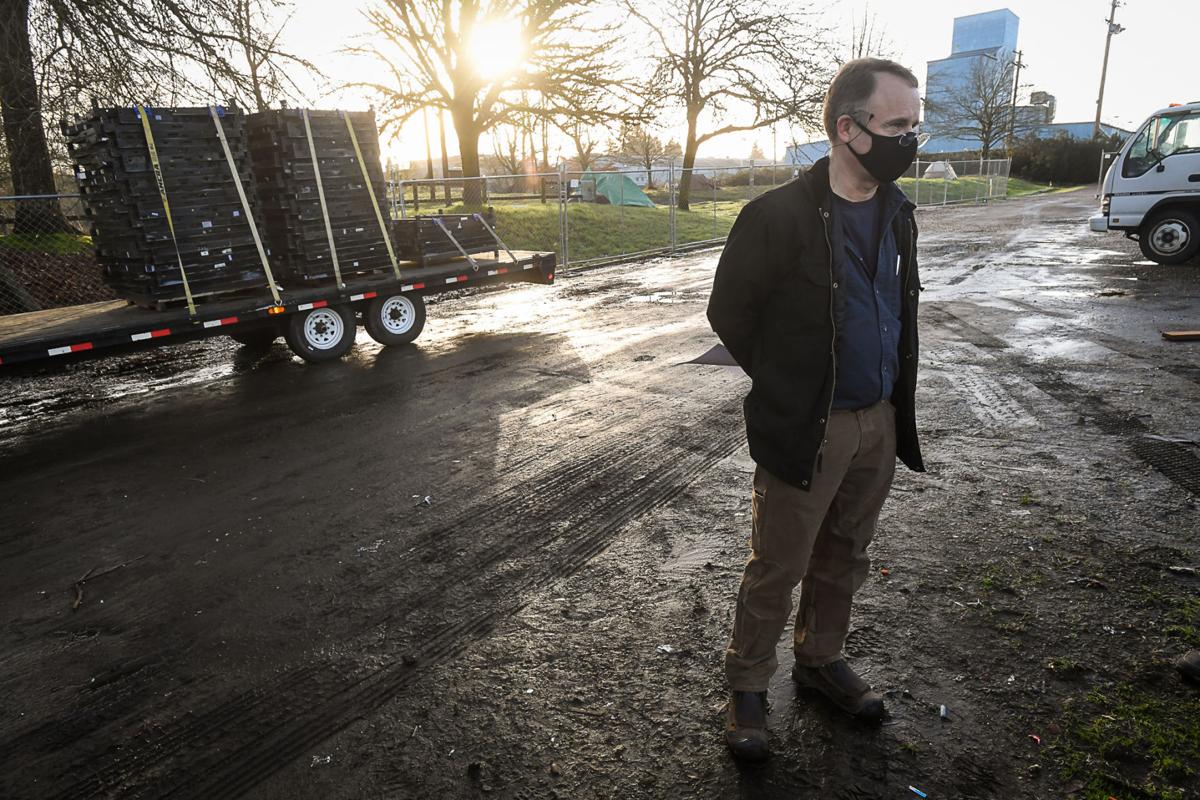 Shawn Collins watches as work begins on the managed camp in Corvallis. 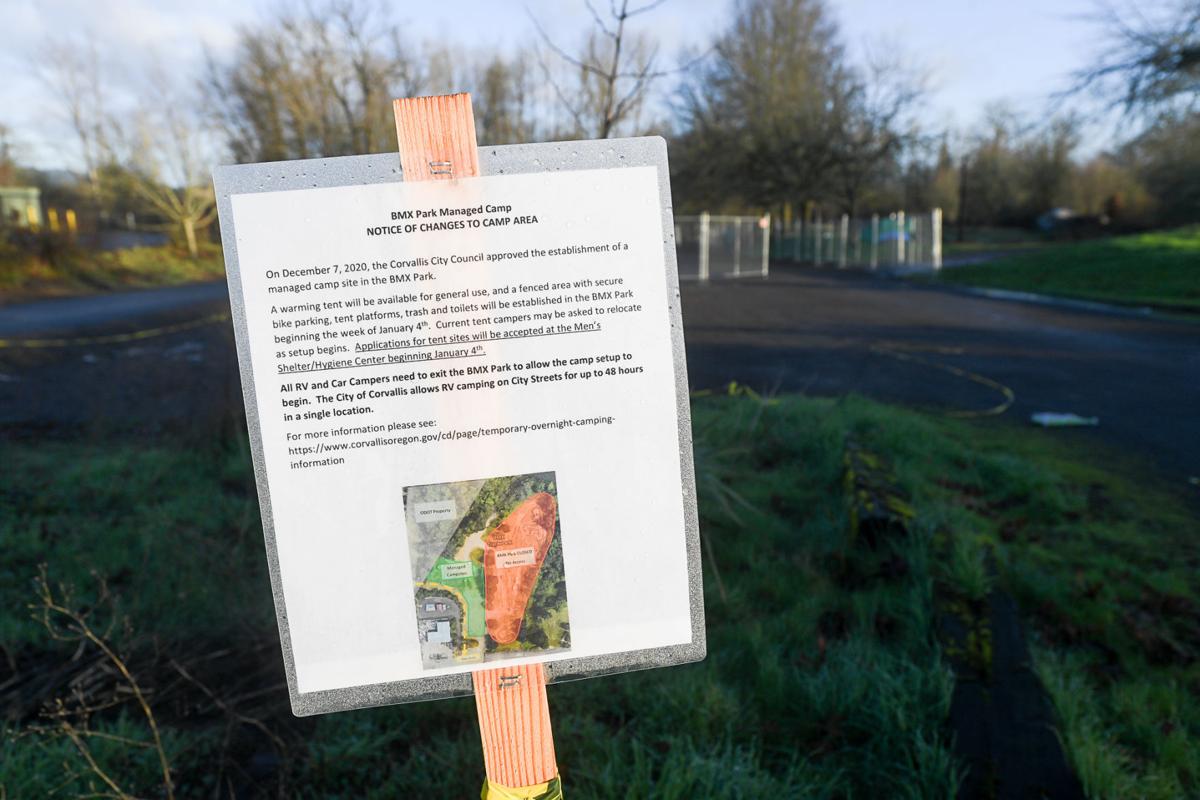 A sign lays out plans for the managed camp.

About 1,000 feet of temporary fencing has been set up to establish the camp’s perimeter, which extends from the new multiuse path near the shelter to the edge of the BMX track.

On Wednesday morning, crews from Special Occasions of Corvallis were finishing up work on the wooden platforms that will provide a base for the tents that are coming next.

The platforms consist of nine 4-foot-by-4-foot steel-framed plywood panels that are supported either by posts or resting atop 2-by-6 beams.

A portable office building has been set up near the Chapman cul-de-sac, with portable restrooms and trash receptacles also planned for the spot.

Move-in day remains uncertain, said Shawn Collins of Unity Shelter. Collins is coordinating the installation of the camp, which is being supported by $125,000 in federal CARES Act funding that was authorized by the Corvallis City Council. The camp will be run using a temporary permit from the city.

“It’s taken longer than expected to get going, but we’re definitely making progress,” said Collins, who noted that money still is being sought for the project, which would be in a "rough spot" with only the CARES Act funding.

The grant money also allowed Collins to buy tents for the campers. Folks can use their own tents as long as they pass fire-retardant muster and still have their tags.

Applications still are being taken for the 24 to 25 spots in the camp. Background checks are part of the drill. Collins said that a couple of couples have applied, but it has mainly been singles.

Collins also is working on hiring the nine to 12 paid staffers who will be on hand 24/7. A key part of their duties will be controlling who goes in and out of the camp. Collins also said that unpaid interns might be part of the mix.

If all goes well, folks might be able to move in by the end of next week, Collins said. Other campers who are occupying spots beyond the perimeter of the new camp will face restrictions on where they can camp, with the BMX track and the Oregon Department of Transportation land near Highway 99W off-limits.

In addition to the managed camp, the Chapman Place operation, which includes the men’s shelter and a hygiene center, will receive four microshelters. A total of 15 will be placed around town by the end of the month, with the money coming from a separate CARES Act authorization.

The four shelters will be placed on the west side of the men's shelter, with 10 more going into the Safe Camp facility at the First Congregational United Church of Christ on West Hills Road. The placing of the final unit remains to be determined.

Applications are open for shelter sites, as well, Collins said, but the rules are a bit different from those of the managed camp.

“There’s more case management with the shelters,” Collins said. “We ask that you develop a plan and look at the obstacles to getting into permanent housing. And hopefully we’ll get you there.

“There are a lot of hurdles that we’re still jumping through, but it’s coming. The more we can create some stability and safe housing for folks, the better chance we have for case management and to move people into a better situation.”

Collins said that the attention focused on issues of homelessness during the pandemic has made a big difference.

“It’s hard to say you can see a silver lining in the pandemic, but with more of a spotlight on the issue we are able to get some things done that wouldn’t have expected a year ago," Collins said.

Mother throws four children out window during fire in Turkey

Mother throws four children out window during fire in Turkey

James Day's most memorable stories of 2020

The first story on my list is the five-year anniversary of Kimberly Hakes, a homeless woman who was killed on the east side of the Willamette …

The RV and car camping facility in Corvallis’ Pioneer Park has reopened.

Story Next Door: Ballard joins the fight against homelessness

Marion Ballard’s roughest moment came on a rainy night last fall. He was homeless, camping under a tarp in the Timberhill area of Corvallis. N…

The Corvallis City Council wants to the city to take quicker action on homelessness.

The Benton County Home, Opportunity, Planning and Equity Advisory Board (HOPE) laid out a huge volume of data Wednesday for members to sort th…

The Corvallis City Council has set a tentative date for returning to the city’s normal mode of posting and cleaning up homeless camps in city parks.

The Corvallis City Council continues to struggle with the question of homelessness. Councilors worked the topic for an hour Thursday at a remo…

Homeless board battles through lengthy draft of recommendations

John Froelich with Special Occasions secures wooden tent platforms at the new managed camp behind the men's shelter in Corvallis on Wednesday morning.

Four-foot-long stakes are used to secure wooden platforms at the managed camp in Corvallis.

Shawn Collins watches as work begins on the managed camp in Corvallis.

A sign lays out plans for the managed camp.