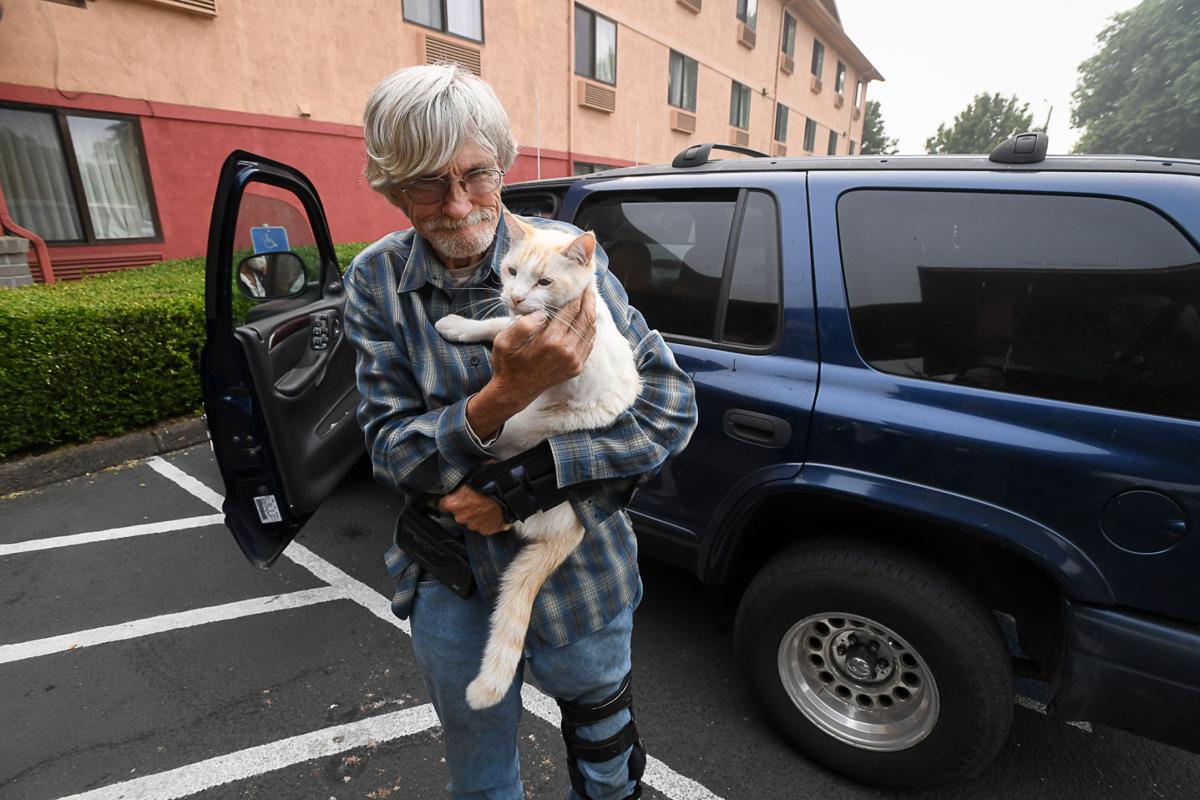 Fire evacuee Charlie Olson and his cat Neeco at the Super 8 in Corvallis on Wednesday. 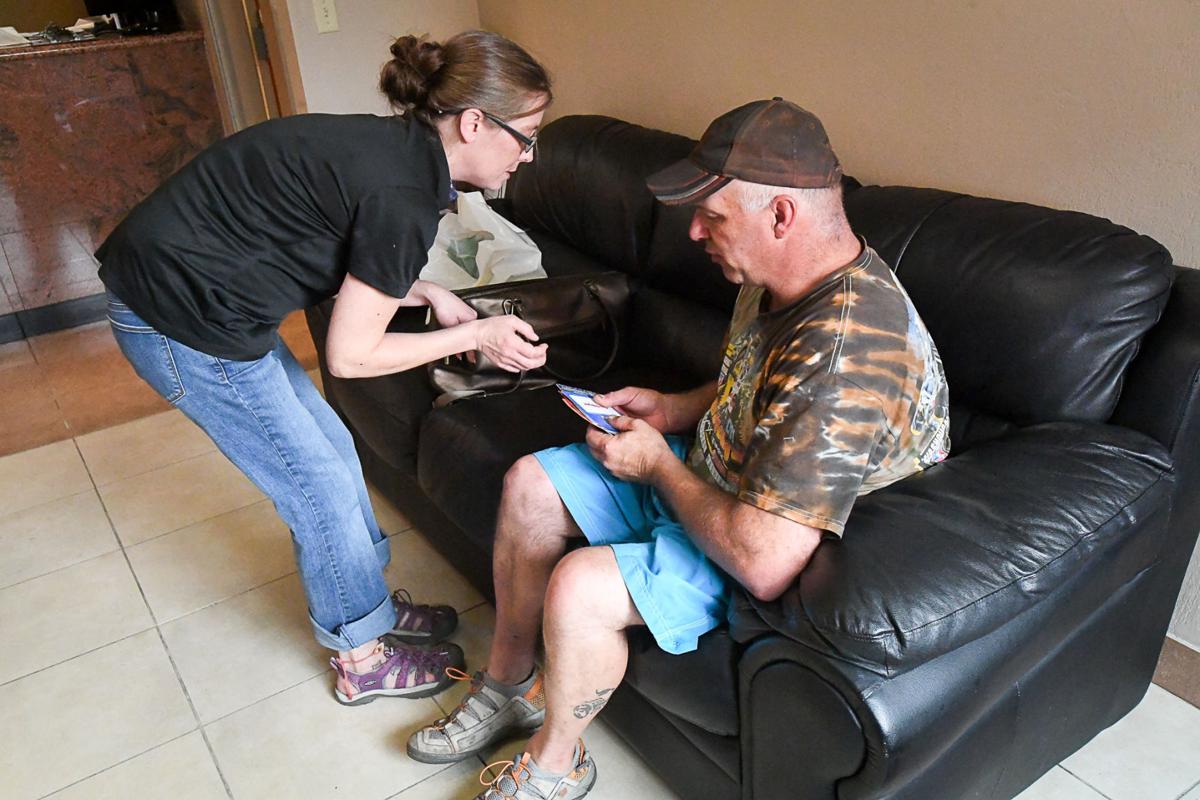 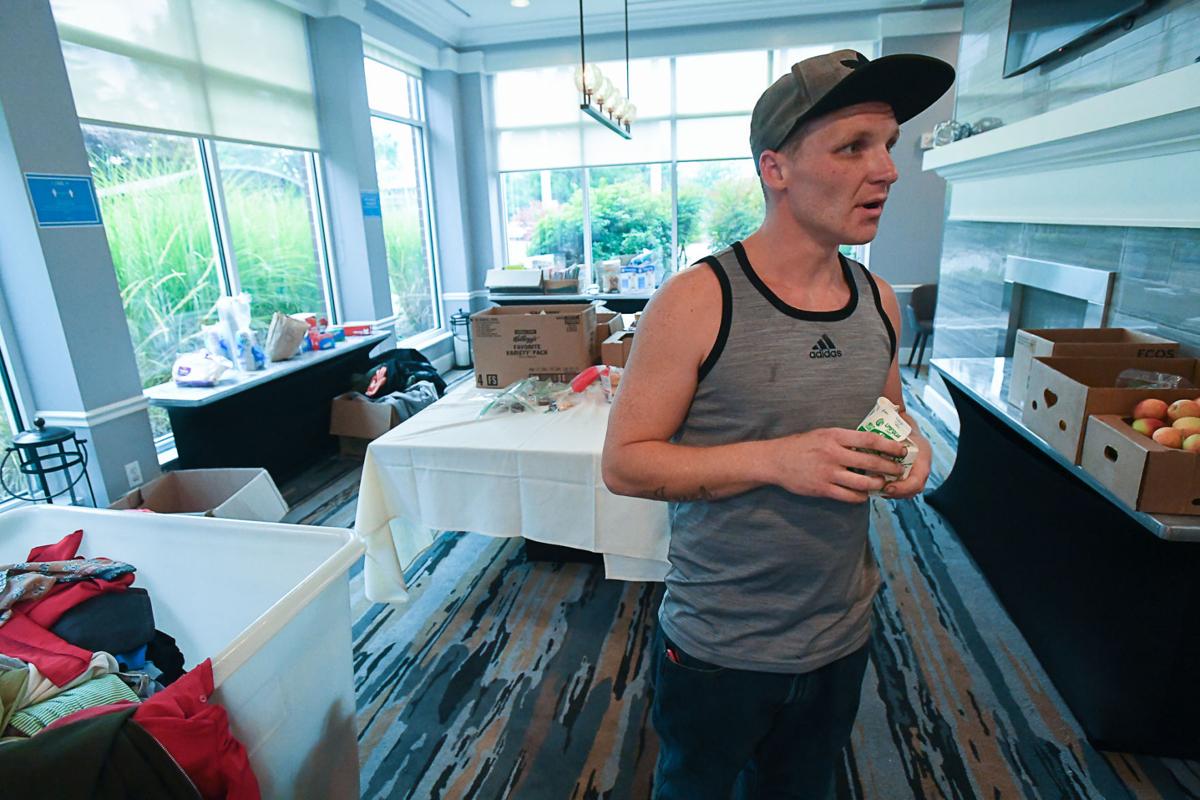 Cody Womack of Lyons looks for a snack among the donated items for fire evacuees in the lobby of the Hilton Garden Inn in Corvallis on Wednesday. 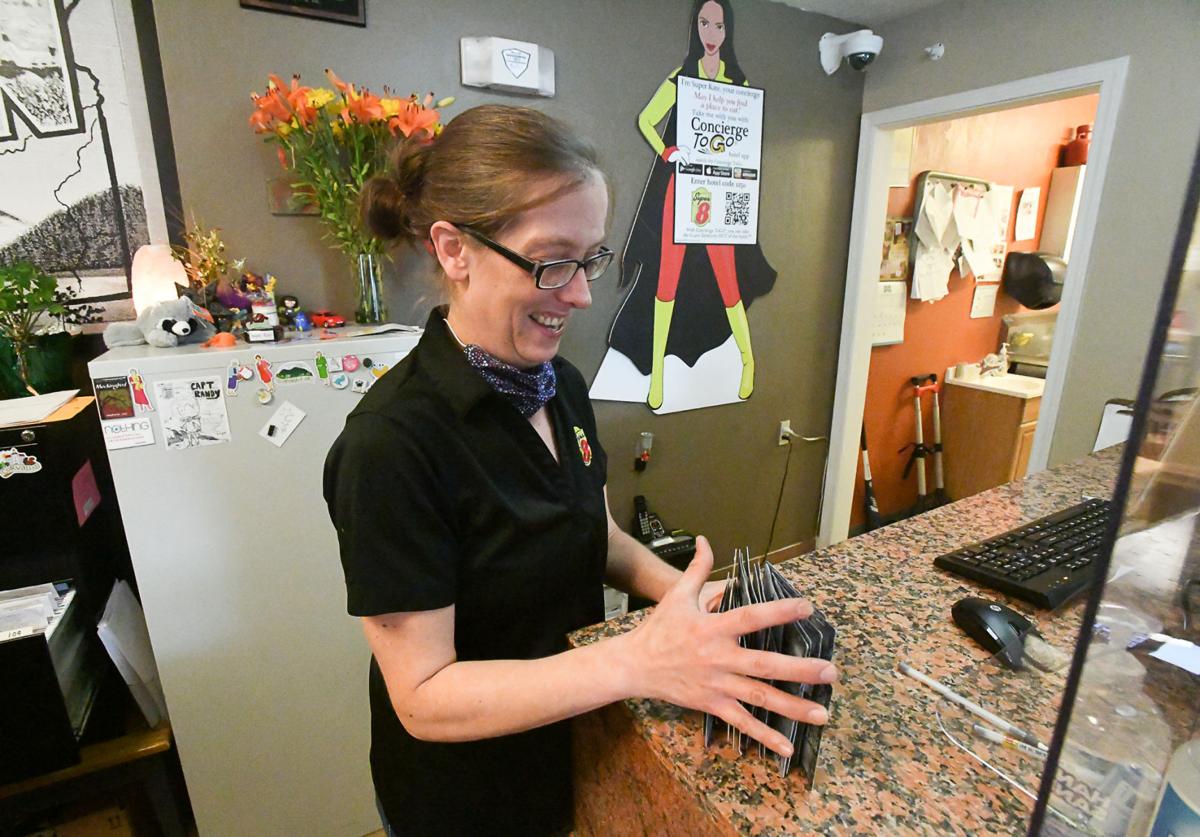 Katie Cuniffm, manager at Super 8 in Corvallis, organizes a stack of gift cards donated to fire evacuees on Wednesday. 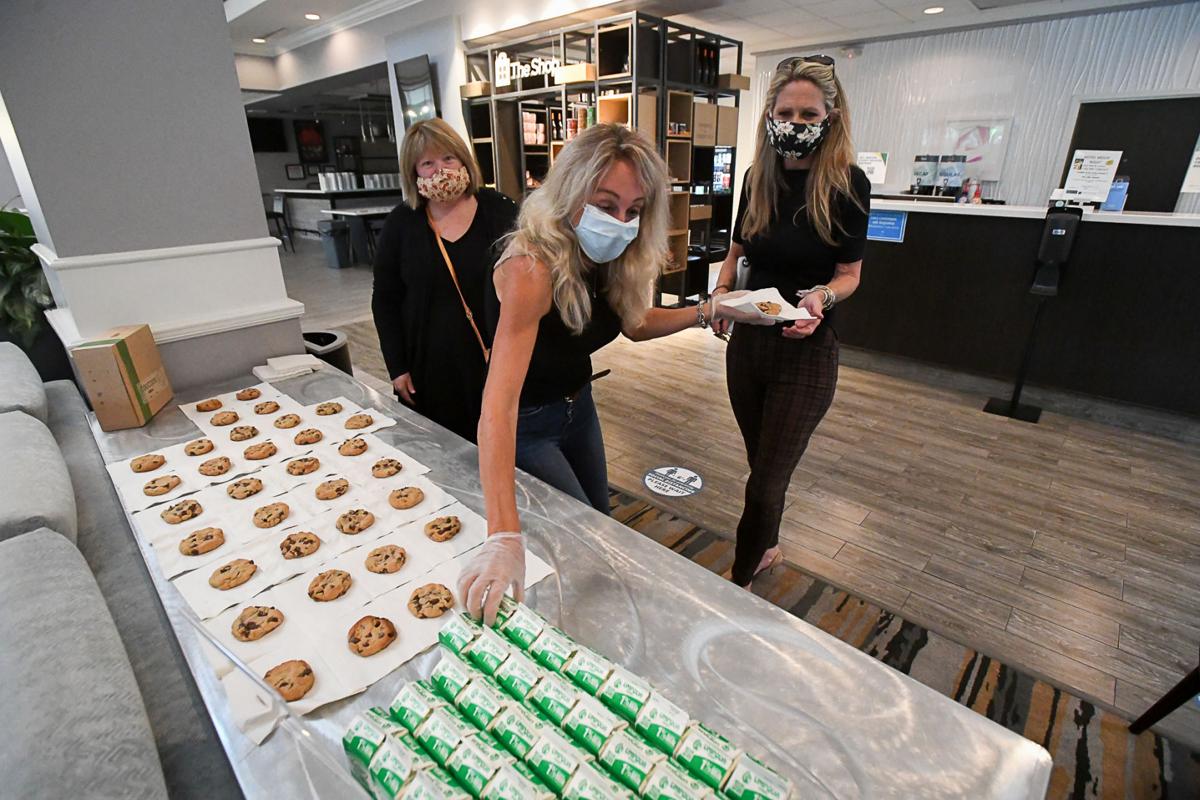 Marti Staprans Barlow serves milk and cookies to Cameron Bailey-Bram a guest at the Hilton Garden Inn in Corvallis on Wednesday while Elizabeth Foster looks on. 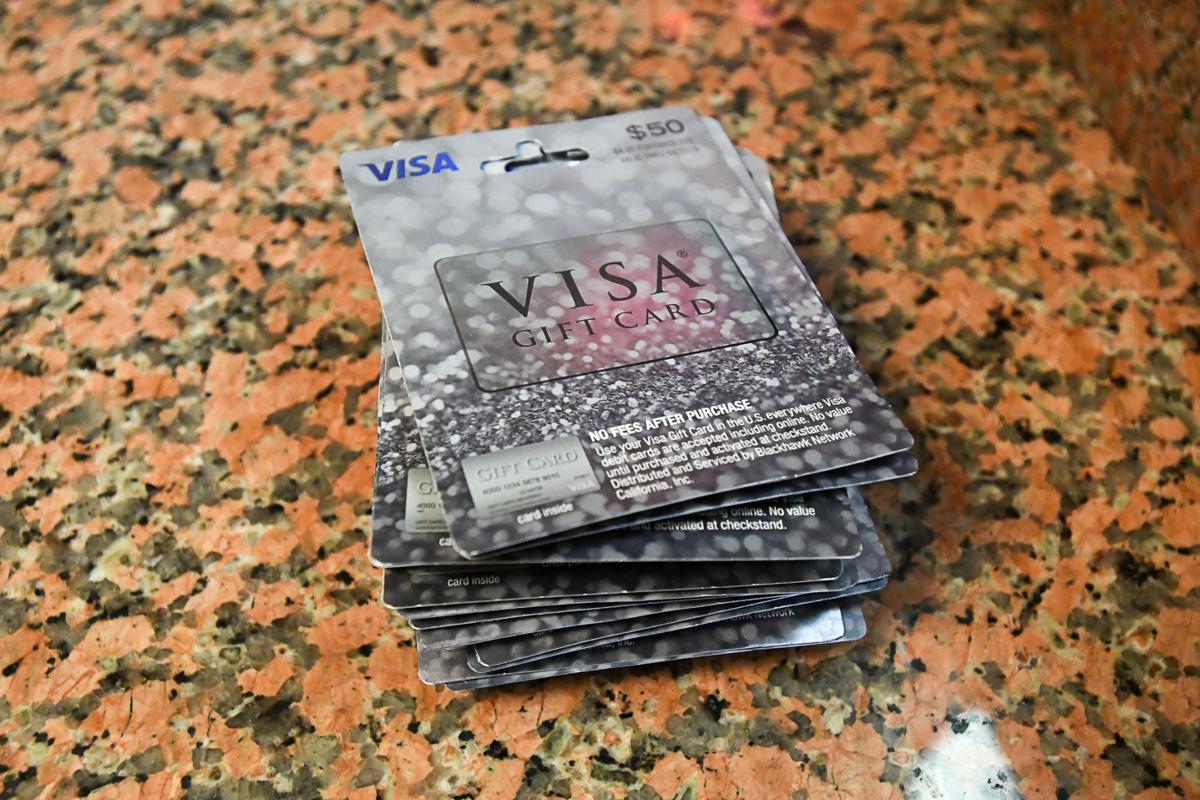 Fire evacuees get gift cards at the Super 8 in Corvallis on Wednesday.

Corvallis hotels are among the local institutions catering to evacuees as the Beachie Creek, Lionshead and Holiday Farm wildfires threaten the mid-valley to the north and south.

Like hundreds of others who’ve visited the Linn or Benton county fairgrounds evacuation sites in the past week, he is now using a Red Cross emergency relief voucher for a room in one of numerous area hotels.

Unlike many evacuees at the Hilton Garden Inn who'd gone home to find a home still there — including 75 nursing home evacuees from Medford — Womack wasn’t so lucky and remained a guest there Wednesday evening.

“I lost the house, I lost the truck — lost a lot of things,” Womack said. When he first heard of the wildfire threat, he manicured his lawn and filled buckets of water to put around his property. “I guess it wasn’t enough.”

As Womack took trips between the Benton County Fairgrounds and his Riverwood Drive home, he watched the flames grow closer. On the last trip back to his property, everything had burned.

As Womack and others like him make plans to rebuild, community members have come together to not only provide food and clothing, but also cash.

Corvallis resident Marti Staprans Barlow, founder of hotel guest services company HospitalityVision, wanted to give back to evacuees staying in her clients’ hotels. Barlow said people had been reaching out to her knowing that she had ties to local hotels, so she set up a GoFundMe that would raise money for Visa gift cards and gas cards.

The fundraiser exceeded its goal of $3,000 overnight between Sunday and Monday. Barlow continued taking donations Tuesday and Wednesday and, by Wednesday morning, had distributed enough $25 and $50 gift cards to the Marriott Courtyard, Holiday Inn Express, Hilton Garden Inn and Super 8 in Corvallis for every wildfire evacuee they hosted.

“The best way we could help these people is to get cash in their hands,” Barlow said. “At least it would be something to help them get back on their feet.”

Barlow also teamed up with local businesses to host movie nights on her digital concierge channel in the hotels, even offering chocolate chip cookies and milk from Coocoos Cookies in Corvallis for guests to take to their rooms.

“At a time like this, it might seem frivolous to hand out milk and cookies and (show) a movie,” she said, “but anything (could help) to restore a sense of normalcy.”

Katie Cuniff, manager of the Super 8 on Second Street, and her staff posted on social media last week about vacancies and accepting donations for evacuees. Within hours, donations began pouring in, even in the form of anonymous Amazon care packages from out of state.

“It took off so much that we actually had to stop taking donations,” Cuniff said, adding that they’ve already begun parceling out donated goods to other evacuation sites. “The response from the community was amazing. It makes me proud to be born and raised here in Corvallis.”

Charles Olson, a Super 8 guest, said his home between Lyons and Mill City had been destroyed. He took refuge at a church in Salem with just his truck and his cat before landing in Benton County and being directed to the downtown hotel.

“These people are the best,” he said of the staff, “(They) go above and beyond what’s called for. And I’m grateful — I’m very grateful.”

The hospitality has allowed guests like Womack and Olson to at least have comfort in their time of need so they can move on when the time comes.

A person who was housed at an Albany evacuation center has tested positive for COVID-19, but the individual had limited contact with others at…

A newlywed Corvallis couple is using one of their favorite hobbies to help city residents find joy and comfort during the coronavirus pandemic.

As COVID-19 cases in Benton County rise with Oregon State University’s fall term getting underway, identifying cases early and getting those w…

Fire evacuee Charlie Olson and his cat Neeco at the Super 8 in Corvallis on Wednesday.

Cody Womack of Lyons looks for a snack among the donated items for fire evacuees in the lobby of the Hilton Garden Inn in Corvallis on Wednesday.

Katie Cuniffm, manager at Super 8 in Corvallis, organizes a stack of gift cards donated to fire evacuees on Wednesday.

Marti Staprans Barlow serves milk and cookies to Cameron Bailey-Bram a guest at the Hilton Garden Inn in Corvallis on Wednesday while Elizabeth Foster looks on.

Fire evacuees get gift cards at the Super 8 in Corvallis on Wednesday.