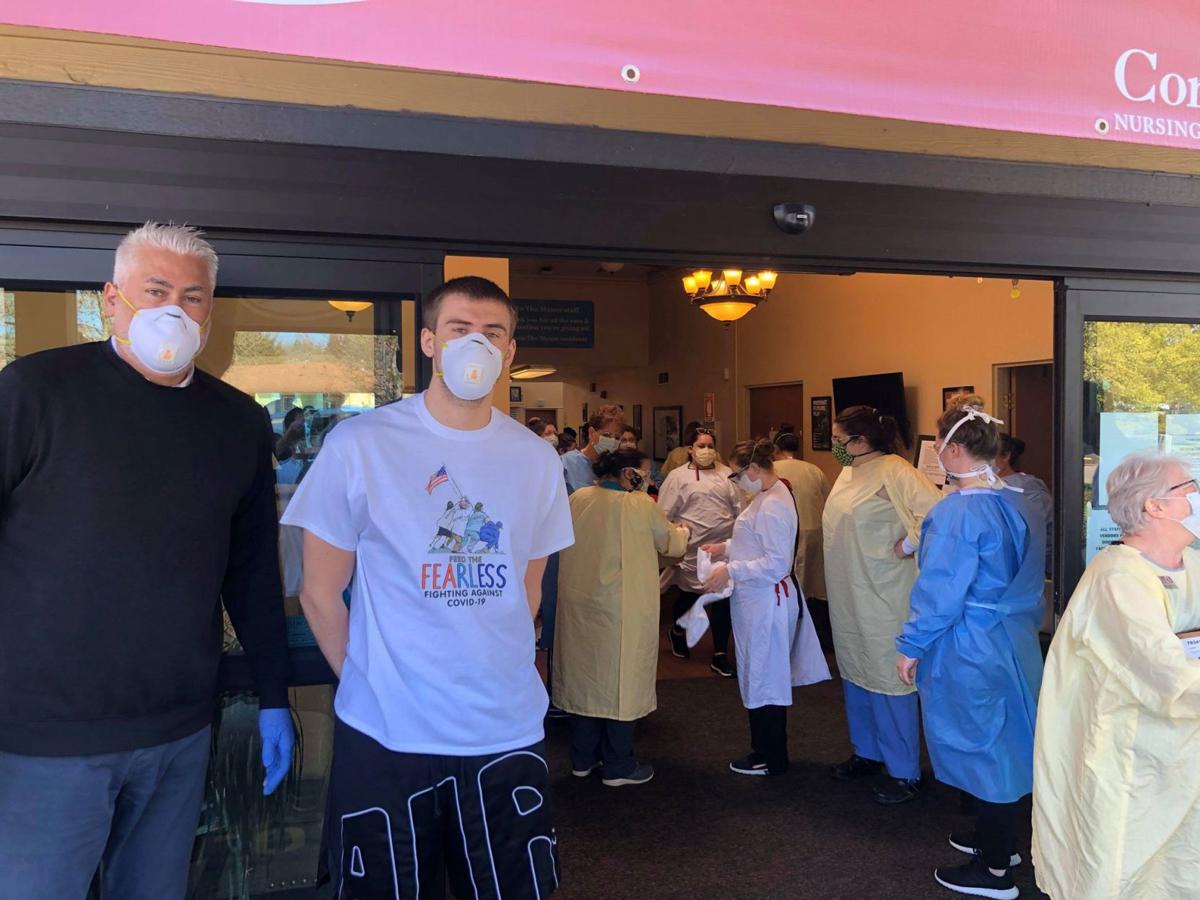 Oregon State men's basketball coach Wayne Tinkle, left, and his son Tres, a standout player for the team, delivered meals to Corvallis Manor staff on Wednesday with the Feed the Fearless program. 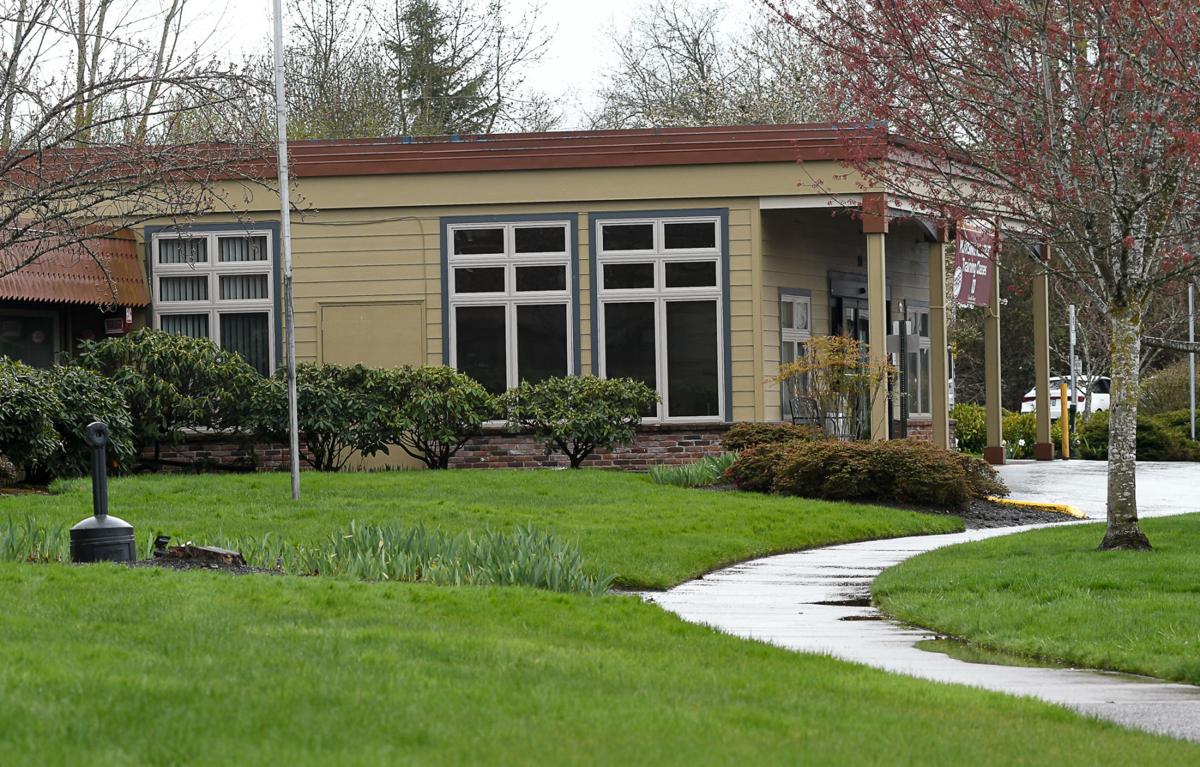 The operators of a Corvallis nursing home say they’re doing everything possible to prevent the spread of coronavirus and provide top-notch care for their residents, pushing back at criticisms made by a caregiver and a patient’s relative in a Gazette-Times story last week.

Two residents of Corvallis Manor, an 86-bed care facility at 160 NE Conifer Blvd., are currently being treated for COVID-19, the respiratory illness caused by the novel coronavirus, and three staff members are self-isolating at home after testing positive for the disease, according to the most recent information on the facility’s website. A third Corvallis Manor resident died March 30 at Good Samaritan Regional Medical Center, where she was transferred after contracting the disease.

In a Gazette-Times story published April 3, Kyla Painter, the niece of one of the infected residents, expressed concern for her uncle, saying he had shown symptoms of COVID-19 as early as March 18 but wasn’t tested for the disease until March 24. The results came back positive on March 29, she said, but her uncle continued to share a room with a resident who hadn’t tested positive for the disease until the afternoon of April 1, when he and the other resident with COVID-19 were moved into a newly opened isolation wing at Corvallis Manor.

Painter questioned why it took so long for her uncle to get tested and why the facility had not set up an isolation wing much earlier, given the fact that public health officials had been warning about the threat of a potential coronavirus pandemic since early this year.

A certified nursing assistant who works at Corvallis Manor, speaking on condition of anonymity to protect her job, expressed concern about what she considered inadequate personal protective equipment at the facility. Specifically, she complained that staff were not given shoe covers and got only one protective gown per shift. She also said caregivers entering a room with a COVID-19 patient would put on a second gown that was kept in that room and take it off before they left the room, to be reused by other caregivers over the course of the same shift.

Officials with Corvallis Manor and its parent company, Avalon Health Care Group, did not respond to initial interview requests from the Gazette-Times. This week, however, Avalon’s vice president for legal affairs provided detailed responses to the newspaper’s questions in email and telephone interviews.

Allison Griffiths said she couldn’t discuss individual patients such as Painter’s uncle but pointed out that there was limited availability of testing supplies during the early days of the pandemic and that it was up to county public health officials to determine who could be tested for COVID-19. In addition, it has been taking up to 14 days to get test results back from laboratories.

“Thankfully, these turnaround times are decreasing in Oregon and availability of tests and rapid testing capability is increasing,” she told the newspaper.

Griffiths said there were a number of reasons Corvallis Manor did not have an isolation wing set up before the beginning of April, noting that there were no public health recommendations on the subject prior to March and that the World Health Organization did not officially declare COVID-19 a pandemic until March 11.

In addition, space had to be cleared out for the isolation wing, and Griffiths said state and federal rules regarding discharge and transfer of residents at long-term care centers were not modified until well into March. As patients were discharged, no new admissions were accepted for that part of the facility so it could be converted for isolation use. Finally, the area had to be thoroughly cleaned and provided with proper equipment.

Since April 1, Griffiths said, Corvallis Manor has had a dedicated isolation wing with eight rooms capable of holding up to 16 COVID-19 patients, served by a dedicated staff. At this point, the wing has two patients being cared for by two licensed nurses, two CNAs and one housekeeper. The wing is located at the end of a hallway separated from the rest of the facility by a double zipper wall and has its own bathroom and break room for staff.

Before the isolation wing became available, Griffiths said, Corvallis Manor staff were following guidelines from the Centers for Disease Control and Prevention for caring for patients with COVID-19 who were sharing rooms with patients still awaiting test results.

The guidelines note that roommates of people who test positive for the disease may already have been exposed, so “it is generally not recommended to separate them in this scenario.”

Responding to the anonymous caregiver’s concerns about personal protective equipment, Griffiths said Corvallis manor has an adequate supply of PPE but, because of ongoing national shortages, is practicing CDC conservation and optimization guidelines. At present, she said, each staff member has their own reusable, washable gown and all have been trained on CDC guidelines. She also noted that shoe covers are not on the list of protective gear recommended by the agency.

Griffiths said she couldn’t say for sure that no gowns were shared by staff caring for patients with COVID-19, but “that’s not the instruction they were given.”

Ongoing efforts to prevent further spread of the disease include screening all staff members each time they enter or leave the facility and checking residents for symptoms three times a day. Staff members who exhibit symptoms of the disease are sent home until they can be medically cleared to return to work, and any additional patients who test positive for COVID-19 will be transferred to the isolation wing, Griffiths said.

Finally, Griffiths noted that the coronavirus pandemic has put an enormous strain on the health care system and that she is proud of the efforts of Corvallis Manor staff.

“These are historic challenges we’re presented with. … We’re dealing with a public health crisis where information changes from day to day,” she said.

“The dedicated caregivers on the front lines are truly heroes in this fight, and they should be recognized as such.”

Three residents of a Corvallis nursing home have tested positive for COVID-19, and one has died from the disease.

The Corvallis Clinic is asking the community to donate handmade masks after receiving a donation of filters from a local company.

New details emerged this week about the extent of infections at two mid-valley coronavirus hotspots.

Oregon has 64 new cases of COVID-19, including four in Linn County and one in Benton, the Oregon Health Authority announced on Thursday, raisi…

A large COVID-19 outbreak at a Corvallis nursing home has been declared resolved by the Oregon Health Authority.

Oregon State men's basketball coach Wayne Tinkle, left, and his son Tres, a standout player for the team, delivered meals to Corvallis Manor staff on Wednesday with the Feed the Fearless program.