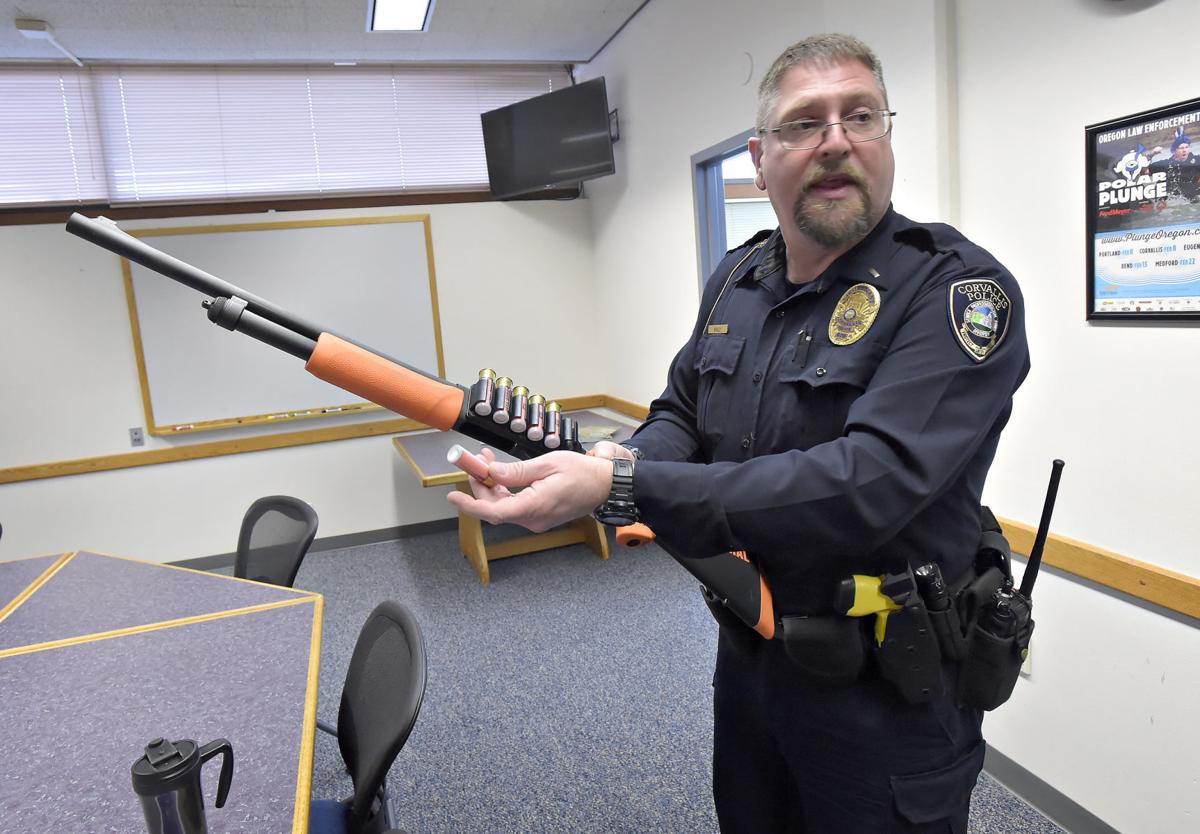 Lt. Todd Bailey of the Corvallis Police Department displays one of the department's recently converted shotguns that use "less-lethal" rounds. The rounds are less likely to kill someone and are reported to be accurate to 25 yards. 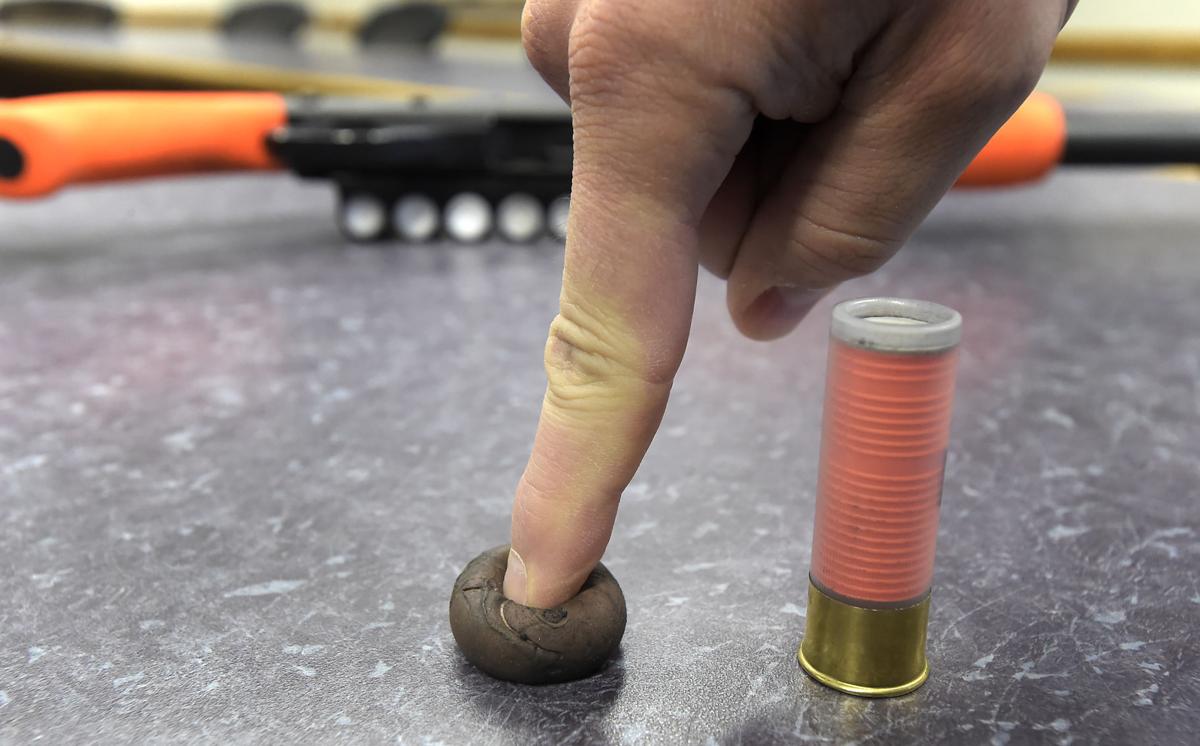 The new "less lethal" rounds the Corvallis Police Department is using with their shotguns are made with a proprietary polymer. 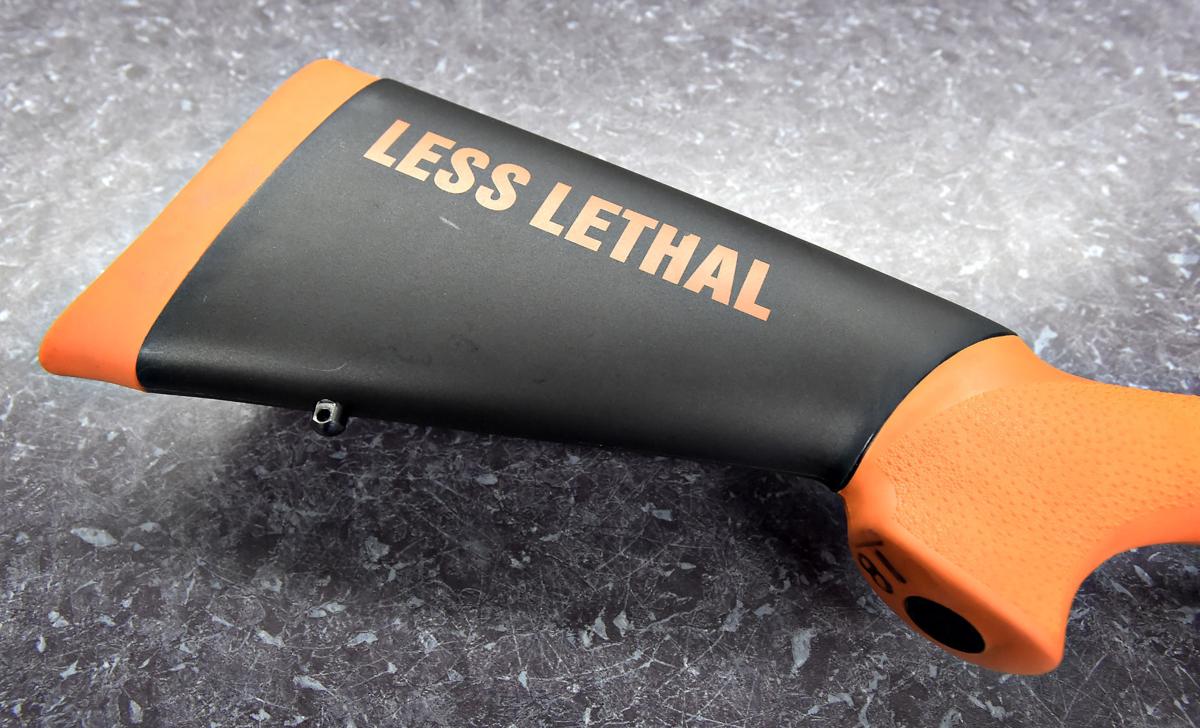 The Corvallis Police Department converted its shotguns with orange and black stocks and orange forends when it changed to "less lethal" ammunition.

The Corvallis Police Department has a new "less-lethal" tool designed to help save lives. But not just the lives of officers or bystanders; the lives of suspects as well.

Officials recently converted every shotgun in the department to fire new “less lethal” ammunition. The new rounds, nicknamed “pancake bullets” and made by Integrity Ballistics, are designed to incapacitate suspects with a synthetic polymer ball that pancakes on impact. The pancake bullets, known officially as the Burns 1401, are fired at about 350 feet per second, roughly one-third the speed of a standard bullet.

The new tool could become useful in situations in which lethal force isn’t appropriate and a stun gun or baton could jeopardize an officer’s safety, said Lt. Todd Bailey of the Corvallis Police Department.

“It seems like, over the last 10 years, we’ve had a higher likelihood of encountering people with weapons who are under the influence in some way,” Bailey said. “These scenarios don’t rise to the level where we’d want to engage them with lethal force and it would be too dangerous to try and get in too close with a Taser, hands or a baton.”

Unlike stun guns, which require close proximity with a suspect, the less lethal shotgun rounds are designed to be fired anywhere from 5 to 25 yards away.

The term "less lethal" means that the ammunition is less likely to be fatal when used correctly, Bailey said. But he stressed that the rounds are not called “less than lethal” for a reason.

“Targeting someone in the head, neck or spine could potentially be fatal,” Bailey said. “So as with any other tool, it’s about how you use it. The same use-of-force rules apply with the less lethal rounds as with a baton. So officers have been trained to fire them from a certain distance and aim for thick, meaty areas such as the thigh, the arm, the calf or the buttocks.”

Over roughly two weeks, every officer in the department completed training in the classroom and firing range on how to use the new less lethal bullets effectively, Bailey said.

The shells of the new “pancake bullets” have a clear casing and orange band and label to differentiate them from standard rounds. The shotguns themselves are still able to fire standard lethal ammunition, so in late February, department officials completed a clean sweep and removed all standard shotgun ammunition from every officer and vehicle.

Bailey said the goal was to convert the shotguns, which have essentially become obsolete as more effective tools have become available, and turn them into a new tool that could potentially save lives.

“Since I’ve been here, we’ve never fired a shotgun round at anybody,” Bailey said, noting that he’s been with the Police Department for more than 26 years. “No one would take out the shotguns, because we have rifles that are a much more effective tool. And we have Tasers to use in other less lethal situations. So we thought why not put a less lethal in every single patrol car?”

“These are much more accurate and much more effective than every other round we’ve seen in the past,” Bailey said. "I've wanted to do this switch for a long time but this is the first new technology that meets our needs."

The less lethal shotguns will not replace other nonlethal tools at the department, said Lt. Dan Duncan of the Corvallis Police Department. Officers will still have the option to use pepper spray, stun guns and batons.

“No one option is going to work in every circumstance,” Duncan said. “Now we have a variety of options to work with so that officers can choose which will work best given the situation. The idea is to be able to use the tool that allows the officer to handle a situation with the least amount of people injured.”

Lt. Todd Bailey of the Corvallis Police Department displays one of the department's recently converted shotguns that use "less-lethal" rounds. The rounds are less likely to kill someone and are reported to be accurate to 25 yards.

The new "less lethal" rounds the Corvallis Police Department is using with their shotguns are made with a proprietary polymer.

The Corvallis Police Department converted its shotguns with orange and black stocks and orange forends when it changed to "less lethal" ammunition.