Become a Member
Read Today's E-edition
Share This
Corvallis schools changed the way math is taught; not everyone is happy about it
0 Comments
Share this

The Corvallis School District has adopted a new way to teach math in schools, a shift some parents say has their children no longer feeling challenged or excited with the subject.

The new math vision, intended to fulfill the learning commitments put forth by the Oregon Department of Education, aims to make math learning more equitable.

As the district and counterparts nationwide see it, the way math historically has been taught in schools accelerates the students who are “good memorizers.” Additionally, the district has found that students of color are not represented in advanced math courses in proportion to their enrollment in the high schools.

To even out these inequities, the district has started de-tracking math classes in grades K-7, keeping students of the same grade together in heterogeneous learning groups so they are all ready for Algebra I in eighth grade. From there, students will have the option to enroll in higher-level math courses if they choose.

Previously, students had the option to excel beyond their grade levels.

“The evidence was clear to me that we needed to change something,” Secondary Schools Coordinator Nikki McFarland said at Thursday’s school board meeting. “I was able to walk into classes and identify whether they were a low or high track math class just based on the color of the students’ skin.”

More than 60 united families in the district are engaged in the issue and believe the district has not been transparent or even particularly communicative about these changes. With two children in the district, CSD parents Polly and Jesse Wegner say their questions and concerns have fallen on deaf ears.

“The district is adopting an experimental pedagogy right now,” Polly Wegner said. “There's no quantitative data that the outcome they’re hoping for is even going to happen.”

Overview of math changes in CSD

Traditionally, Corvallis School District students in grades K-12 have been able to move at their own pace, with some staying at grade level while others accelerate to work a grade or two ahead.

With the new vision, the district will no longer separate math classes by aptitude in grades K-7 because of the “irreparable damage” tracking does to students, according to a document prepared for the school board.

“I’ve heard students self-identify as being in ‘the dumb class’,” McFarland said. “I do not believe it’s OK for our school system to send a message to a 12-year-old that they can’t do math.”

In eighth grade, students will be able to enroll in either Math 8 or Algebra 1. High schools will continue to offer geometry, data science, honors and grade-level algebra courses, trigonometry, pre-calculus, AP calculus and AP statistics.

Impacts of the changes will be analyzed over the next seven years, and officials hope they will result in diverse and unpredictable math class rosters at the secondary level.

According to a district document, 22% of students enrolled in Algebra 1 in ninth grade received a D or F in 2019, with Latinx students receiving those grades at two to four times the rate of white students.

The district also found that many students do not enroll in a fourth year of math, and that students of color are overrepresented in grade level math at the secondary level and intervention groups at the K-8 level.

By adhering to grade-level content in grades K-7, the district believes that they can achieve better student outcomes in all of these areas, and end up with equitable representation in advanced learning.

A new way of teaching math

To keep all children in the same classroom yet satisfy their individual needs, the district is adopting a “low floor, high ceiling” approach to teaching. Elementary Schools Coordinator Amy Lesan explained the concept as introducing math at a level everyone in the class can access.

For example, rather than having only one way to get to one right answer, teachers will ensure students use logic and reasoning to understand multiple pathways to get the right answer.

By making sure students understand concepts deeply rather than relying on algorithms and memorization only, the district believes that students will be more prepared to use math in their everyday lives, thus forming a positive math identity.

“What many parents are asking for is to skip a whole year of standards, and that does not serve our talented and gifted students,” McFarland said. “There is intentionality around pacing, and then a student can advance more quickly.”

However, not all educators agree that this will be feasible in practice.

“It’s not about putting a lid on it,” he said. “I wouldn’t want to discourage students who are flying in math. And it is hard to differentiate between students because there is not enough time in the day.”

CSD parent Natasha Mallette is a nuclear science and engineering professor at Oregon State University. Her main concern with the new math vision is that the district is not addressing the potential negative long-term effects of de-tracking math when students, especially girls and girls of color, enter higher education.

“There’s tons of data that show girls’ perception of their ability in math is tied to the quality instruction they get when they’re young,” she said. “I’m worried about the unintended consequences around gender differences going forward.”

Part of the reason why parents are worried about these changes is because they feel there has been too much secrecy and not enough communication from the district. Instead of learning about these changes from the administration, many found out through their own children coming home with complaints about being bored in class.

“We thought it was a COVID issue,” said Beth Crawford, who has two students in the district. “It wasn’t until the end of [the 2019-2020 school year] that I realized that what we’d experienced was a systemic change.”

Assistant Superintendent Melissa Harder said that de-tracking at the elementary school level has been going on for eight or nine years, and that it was the school principals’ job to communicate the changes to the parents.

In October 2020, the district notified parents in the two remaining elementary schools that used tracking — Bessie Coleman and Kathryn Jones Harrison — that there would be no more math leveling. Rumors began to spread in the community that changes would also be made at the middle school level.

Seeking clarification from the district, 29 CSD families penned an open letter to the school board on April 29 requesting a meeting and information about the proposed changes to the curriculum.

They received a response on June 2 from Superintendent Ryan Noss, assuring them that there would be no changes at the middle school level for at least a year.

“The district is not anticipating any changes to our math programming at the middle or high school levels for the upcoming school year,” Noss wrote.

But on Aug. 18, the messaging changed. A letter was sent home to middle school parents regarding math that directly contradicted the last piece of communication the district had sent out.

“This year we are making some changes to math in the middle school level to prepare all students for Algebra 1 in eighth grade,” the letter stated.

The change was due to a shift in teacher and administrator mindset after staff underwent a summer of professional training in de-tracking math, McFarland, the secondary schools coordinator, said.

“Over the summer, many of our teachers participated in professional learning that made them think differently, and they thought this is not the best practice for kids,” McFarland said. “That change was based on learning, and we still have learning to do.”

With the "sunsetting" of math tracking, students who were already a grade level ahead of their peers are relearning concepts alongside students who are learning them for the first time. Parents like Shawn Jacobsen are worried that their children will lose passion for a subject in which they have excelled for years.

“She’s essentially bored,” Jacobsen said of her middle school-aged daughter. “We understand conceptually what they’re trying to do. It’s the timing of doing it when the kids are in the middle of an education path.”

As a result of these changes, more parents started enrolling their children in private school, hiring tutors or homeschooling, at least according to the critics.

“I think we’re going to further create inequalities by doing something like this because families with resources are going to do what they need to do,” Jesse Wegner said, “as opposed to having those equitable resources at school for everybody.”

Harder, McFarland and Lesan believe it is possible to successfully have children of varying levels of proficiency work alongside each other in a classroom. By building teachers’ confidence around math instruction, administrators believe that they will have the tools necessary to differentiate skill levels and cater to each child’s needs.

And because CSD is one of the first school districts to trailblaze this new way of math education, it will be a learning experience for all.

“We’re not doing this in a vacuum of evidence,” Harder said. “We are working with our administrators who can see this vision and giving them what they need to help their staff become confident.”

A false report of a threat at South Albany High School circulated on social media on Monday, Dec. 6, prompting concern and rumors in the Great…

Stressed out teachers in Albany: We need more subs

'I’m not sure how much longer I can keep this up,' one teacher said.

Fewer students on track to graduate after pandemic setbacks

The Oregon Department of Education released its annual At-A-Glance School and District Profiles Thursday morning, which showed a 12% decline i…

Wintry weather conditions led to a round of delayed school starts and bus snow routes Tuesday morning, Dec. 14 and more could be on the way. 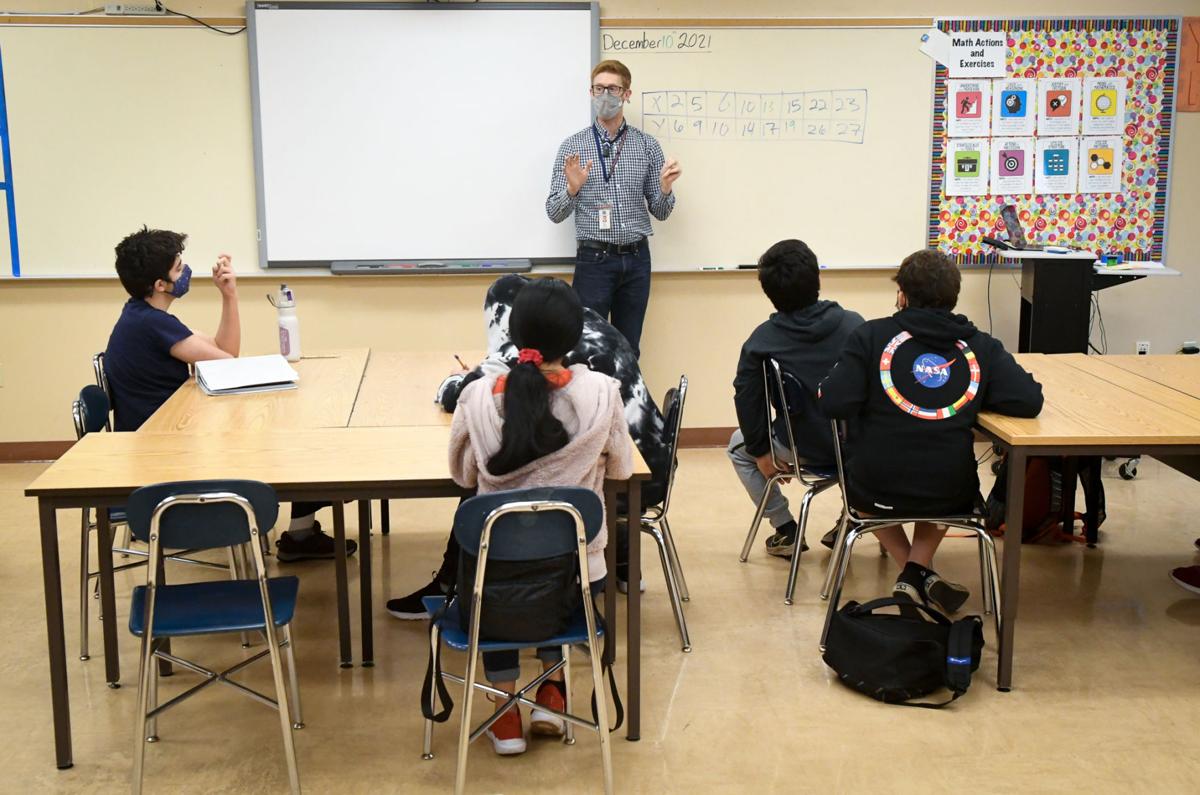 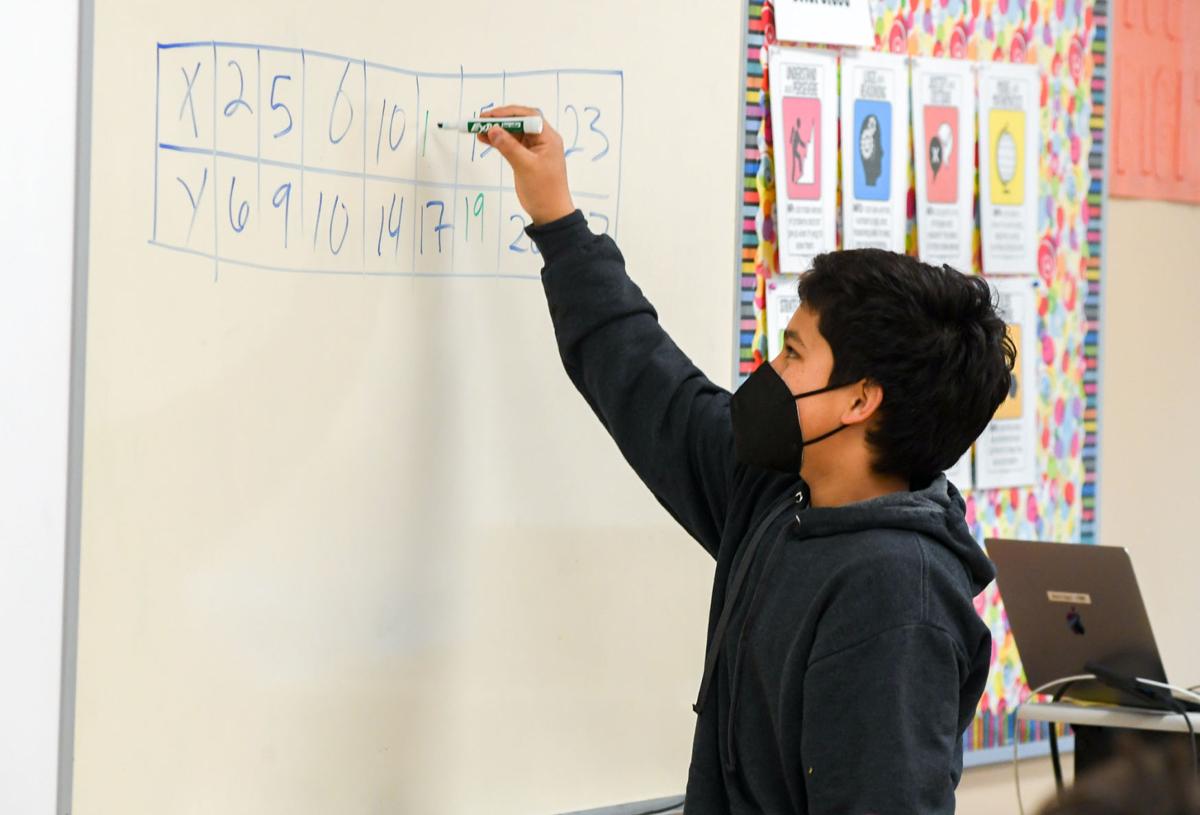 Jacoby Jones writes an answer in a silent game being played in Jason Haun's foundations of algebra and geometry class for eighth grade students at Linus Pauling Middle School. 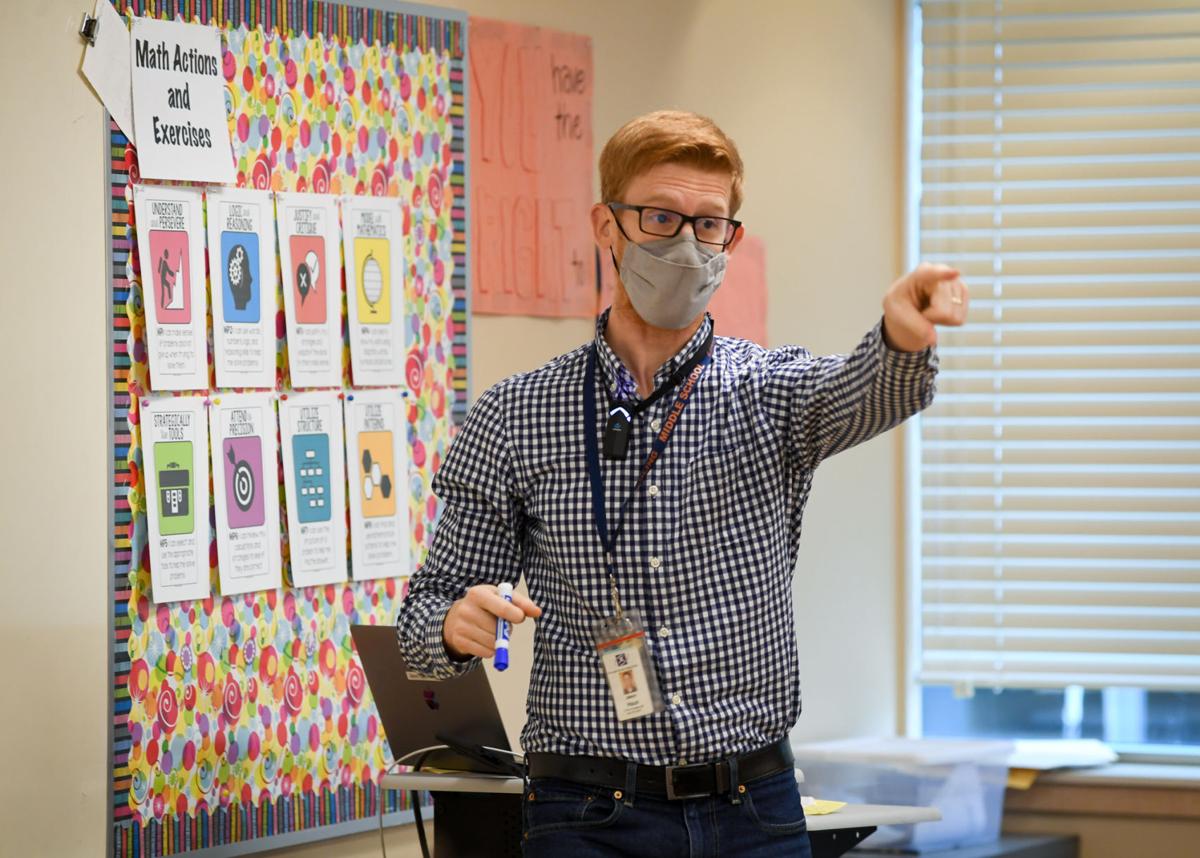 Jason Haun calls on a student in his foundations of algebra and geometry class for 8th grade students at Linus Pauling Middle School.