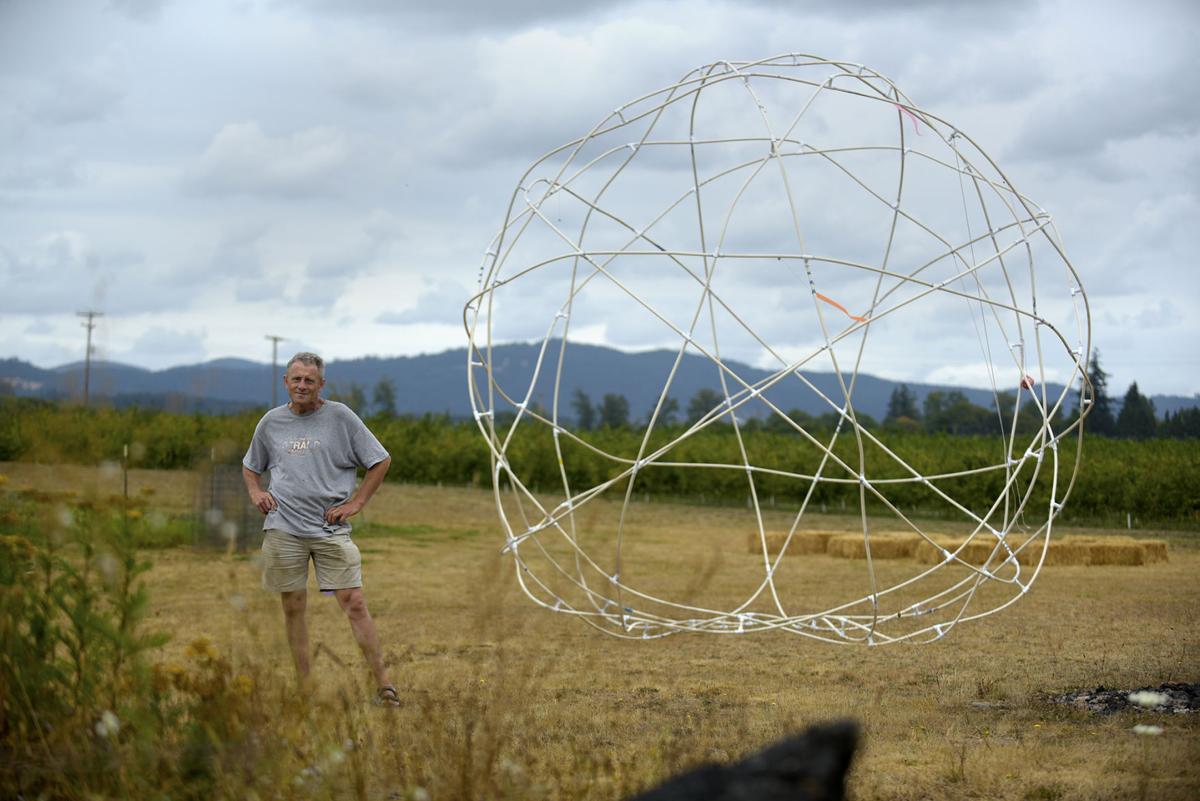 Jeremy Smith stands near a 15-foot sculpture he made out of half-inch PVC pipe at the Organic Growers Student Farm. Smith, a retired computer programmer, has made several smaller sculptures ranging in size, shape, and material. The sculpture is made up of 10 circles and a series of pentagons. 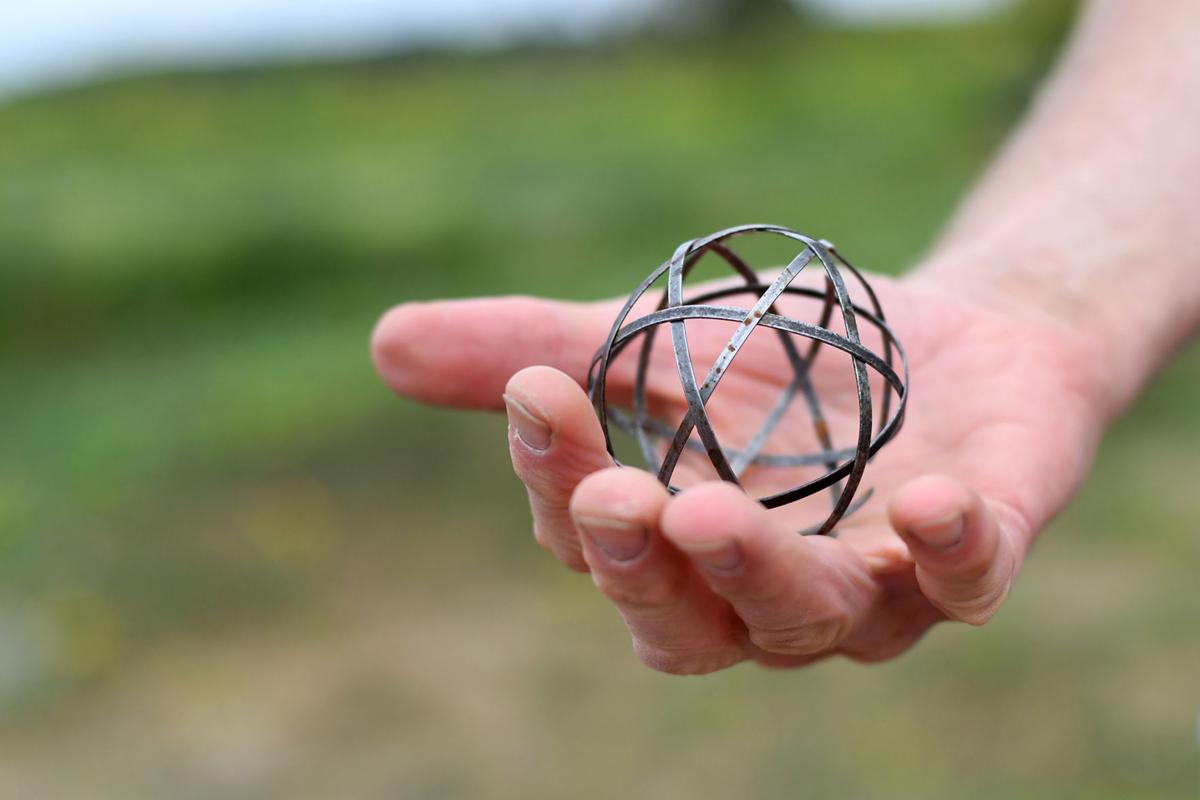 Jeremy Smith holds one of his favorite sculptures: It's made of street sweeper twine he found on the floor. 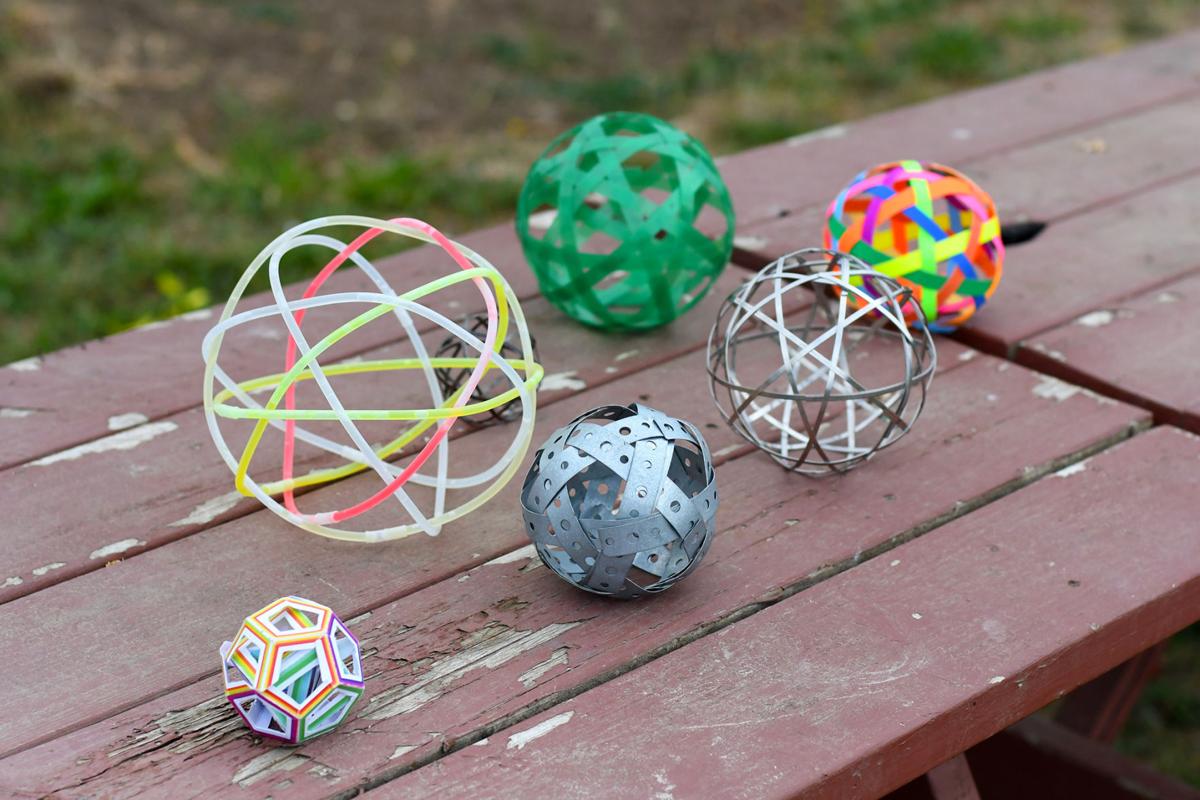 A collection of sculptures ranging in size, shape, and material made by Smith. Smith said he's fascinated by finding ways to link mathematics and art. 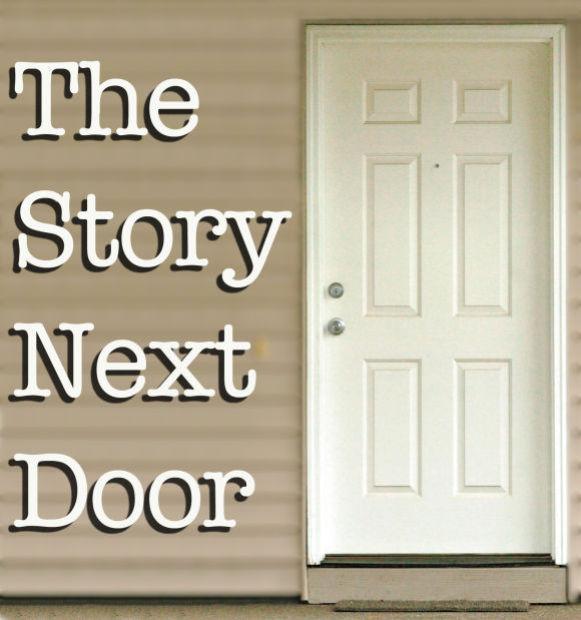 In the middle of 3-acre grassy farmland a quarter-mile off of Highway 34 sits a new 20-foot tall sculpture that has baffled its creator, Corvallis’ Jeremy Smith, for more than a decade.

“It’s a mathematical object and was built using mathematical measurements but it’s going to serve as a canvas so the students who work out there in the organic garden can change it and decorate it,” Smith said. “What’s fascinating about an object like this is it can be an infinite number of things. Who knows what will happen with it now?”

The project is an extension of a regular icosahedron — a Platonic solid containing 20 triangular sides. The Platonic solids (the tetrahedron or pyramid, cube, octahedron, dodecahedron and icosahedron) are named after Plato, the ancient Greek philosopher who theorized that the classical elements were made of solids.

“They were described by Plato as being perfect objects,” Smith said. “That’s what makes them so special. They are mathematically beautiful.”

A regular icosahedron is commonly seen in tabletop gaming with 20-sided dice and Dymaxion mapping, which projects a world map on an icosahedron so that when folded out to a two-dimensional space, it can preserve more accurate shapes and sizes. And it was the Dymaxion map that first intrigued Smith about 10 years ago while he was working with the Geosciences Department at OSU.

“It was out of the blue and it totally absorbed me,” Smith said, adding that he was reminded of “Close Encounters of the Third Kind,” in which Richard Dreyfuss’ character becomes consumed by Devils Tower in Wyoming. “This has become my Devils Tower ever since.”

The project is Smith’s latest attempt to combine math and art in a way that he hopes will eventually become linked in children’s education.

“My job is to blow people’s minds. It’s a blast,” he said. “So many kids who are interested in the arts hate geometry and math, but this is fun.”

Smith has been creating mathematical art for more than 20 years, previously showing off his work at several da Vinci Days festivals and at the annual Bridges Conference and Joint Mathematics Meetings — a national conference on mathematical connections in art and music.

“A lot of the work I do artistically comes from playing around scientifically,” Smith said. “Math and art are crucial to our understanding of the world around us and they’re linked in so many ways.”

Smith said he first became fascinated with bridging math and art decades ago while growing up in London, England. He had just graduated from London University with a degree in botany in 1973 when, on a whim, he booked a one-way ticket to San Francisco.

“I’ve always been interested in everything, so I go where the wind takes me,” Smith said. “I often thought of going to another country but I never thought of coming here. Which is probably why I came, because it was something I never thought about and I couldn’t resist.”

While he initially worked as a horticulturalist, Smith soon developed a fascination with the rapid growth of computer technology in northern California.

“I had an interesting dilemma. I could keep working in botany and horticulture as a landscaper, or I could jump in to computers, which were booming,” he said. “I decided on computing. And the first call I made was to HP.”

Hewlett-Packard, at the time, still was a small company and had no openings for someone without any programming background. But a programmer Smith spoke to recommended some small computer software companies in the area. Eventually, Smith got a job working for a small software company.

One day, in an attempt to understand the products he was asked to sell, Smith started writing his own programs. Soon, customers began to ask him if he had any programs they could try.

“One guy kept asking me for new programs and so I kept making new ones for him. After a few months, I told him to just hire me, and he did,” Smith said. “I wasn’t a mathematician, but I did tons of reading and I developed this wild fascination playing with computers, and particularly with calculators.”

Over the next decade, Smith developed his skills as a computer programmer, hopping from a steel manufacturing company to an oil company and an environmental sciences company.

“It was early enough that most programmers didn’t come from computer sciences backgrounds. Companies wanted to see what you could do, not what you knew,” he said. “It really was a fortuitous series of events.”

In 1986, Smith went to work for the Environmental Protection Agency’s office of research and development in Corvallis.

“The West Coast has always been cutting edge and I love being up on what’s going on,” he said. “And when I came to Corvallis it was fascinating being in the westernmost small city.”

When Smith retired a few years ago, his lifelong loves of mathematics and the arts became intertwined.

“When (physicist) Niels Bohr developed the view of the atom, he was inspired by Picasso’s paintings,” Smith said. “And it happens in reverse too. I love the fun factor and the wow factor of art, but I am always blown away by the numbers and the mathematics that led to it.”

Employment: Retired; 20 years as a computer programmer in Corvallis.

Hobbies (when he’s not creating math art): “I used to run triathlons but I’ve recently taken to biking everywhere. I love Corvallis because it’s a great place for biking.”

Woman dies in crash on Highway 223

An 80-year-old Dallas woman died Friday morning in a two-vehicle collision on Highway 223 in Polk County.

Jeremy Smith stands near a 15-foot sculpture he made out of half-inch PVC pipe at the Organic Growers Student Farm. Smith, a retired computer programmer, has made several smaller sculptures ranging in size, shape, and material. The sculpture is made up of 10 circles and a series of pentagons.

Jeremy Smith holds one of his favorite sculptures: It's made of street sweeper twine he found on the floor.

A collection of sculptures ranging in size, shape, and material made by Smith. Smith said he's fascinated by finding ways to link mathematics and art.