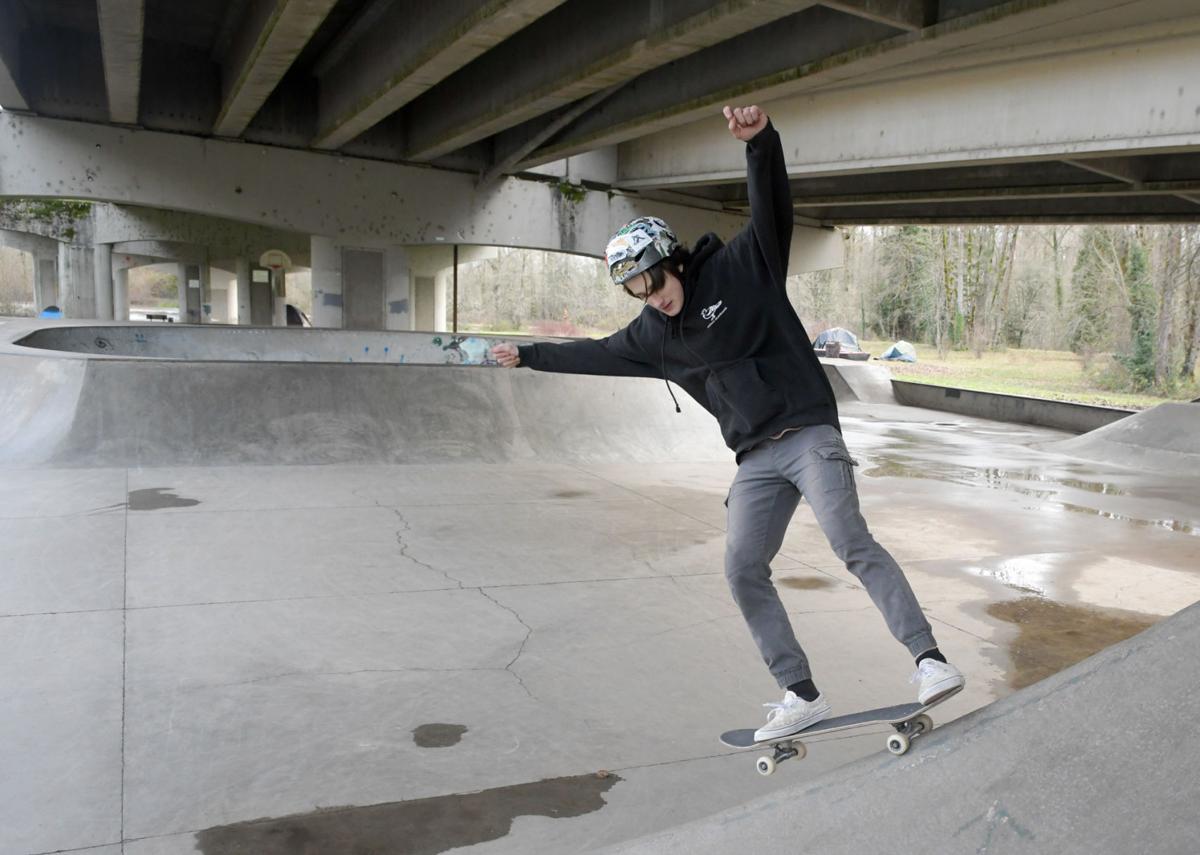 Hunter King, 15, drops in at the Eric Scott McKinley Skate Park in Corvallis on Friday, Dec. 7, 2021. The planning commission has approved a new sculpted skate facility, the Corvallis Bowl, as an expansion of the existing park. 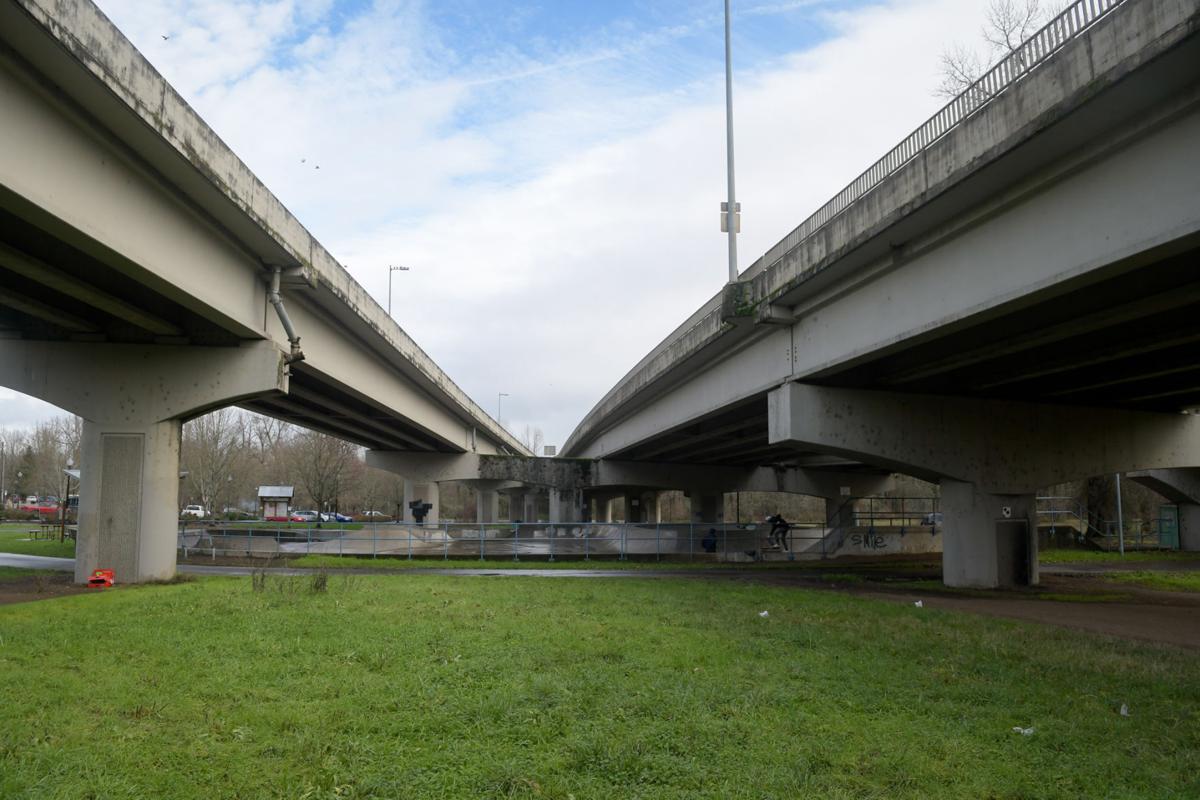 The Corvallis Planning Commission approved the Corvallis Bowl as an expansion of the existing Eric Scott McKinley Skate Park. 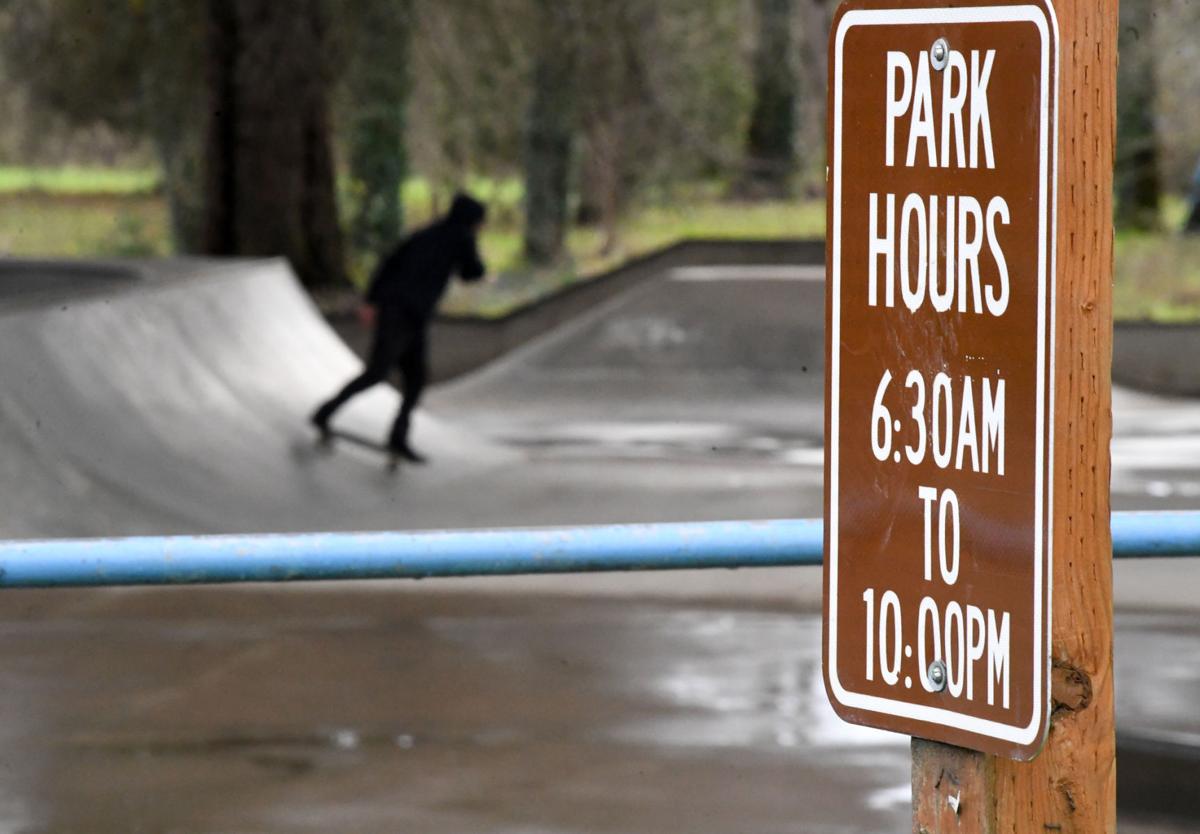 Drug activity and crime are a concern by some residents when in comes to the Eric Scott McKinley Skate Park in Corvallis. 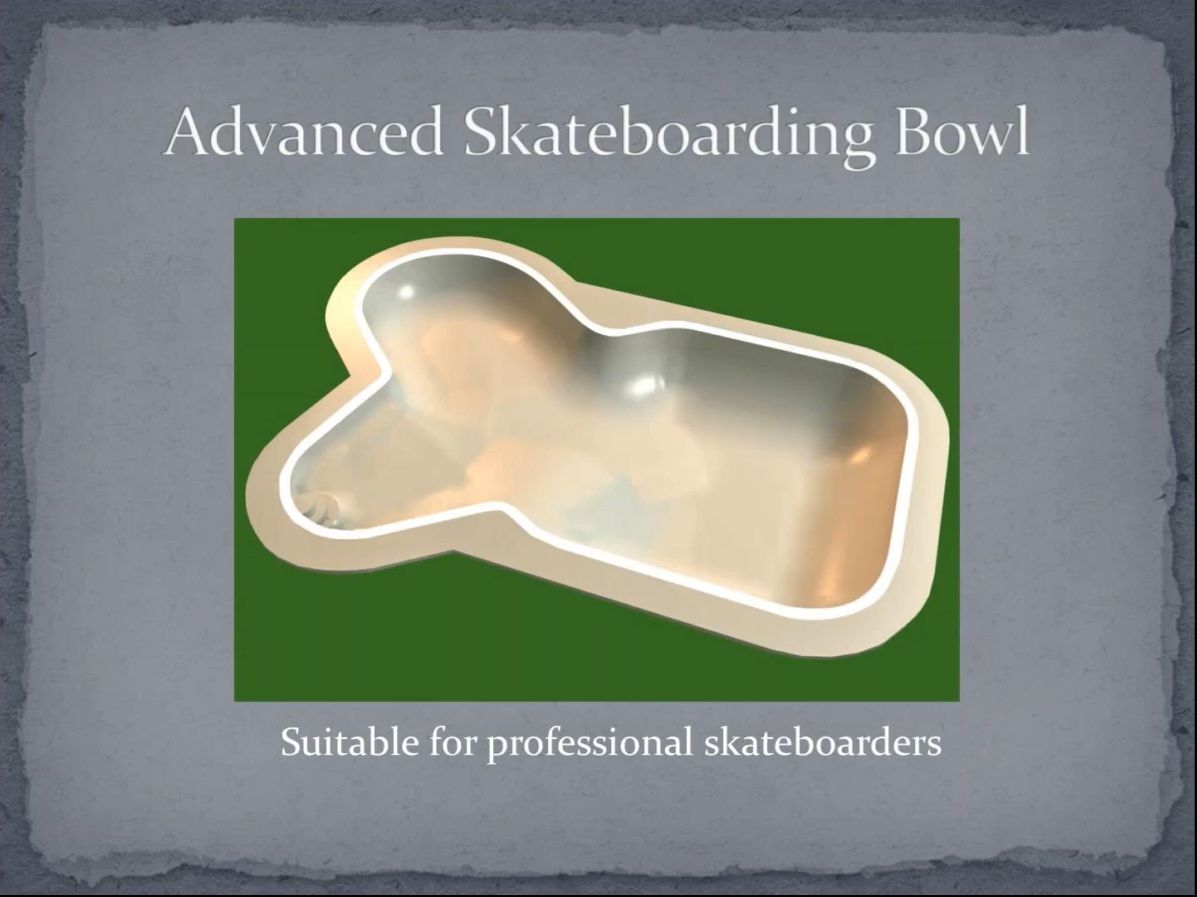 A conceptual drawing of the new Corvallis Bowl, which was approved by the planning commission Wednesday, Dec. 5, 2021. 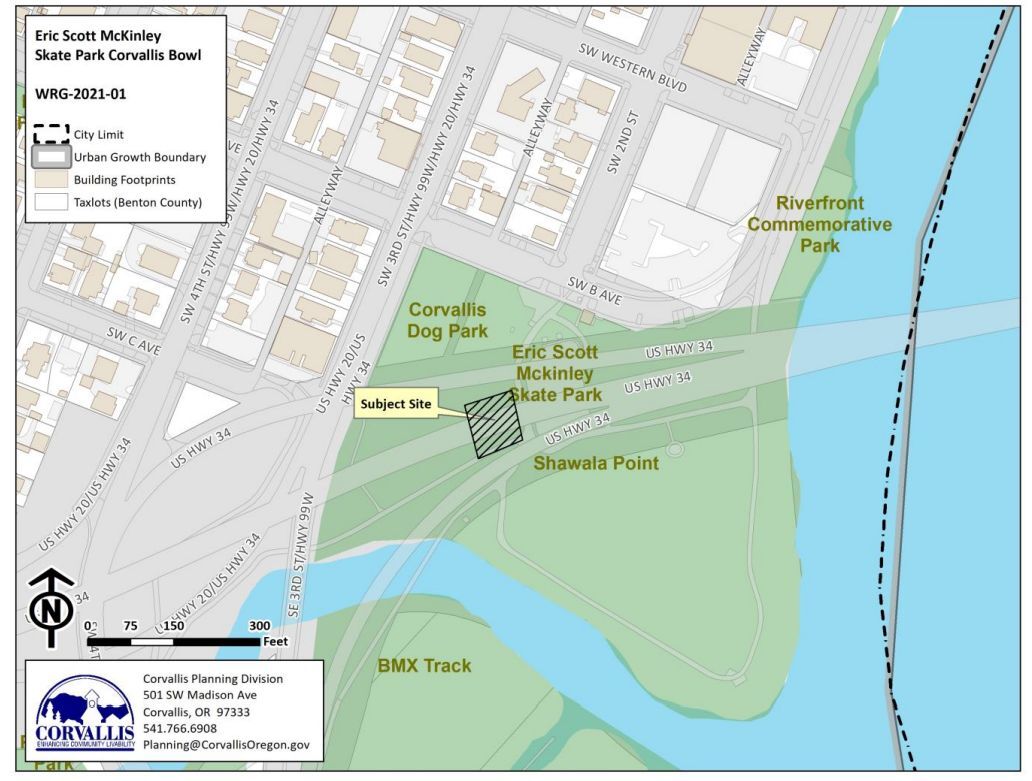 A map showing the location of the new skate bowl.

A planning drawing of the new Corvallis Bowl, which will be added to the existing skate park.

The Corvallis Planning Commission ultimately approved adding the bowl after some persuasion from park supporters.

Commissioner Paul Woods made a visit to the park before the Wednesday, Jan. 5, planning commission meeting, finding nobody using the park during that rainy afternoon. But he did count 11 tents, he said.

Woods said he’s heard about a lot of drug activity around the park, including children being offered drugs.

“I have real concerns about that area,” Woods said. “I hope that whatever improvements we can make will make it safer for the kids than it has apparently been to this point.”

Commissioner Carl Price also mentioned a history of crime and drug activity at the park, though he said he has not visited the site recently.

The Corvallis Bowl, as it’s called on city documents, was brought forward by Corvallis Parks and Recreation. The skate park sits underneath a highway overpass near the end of Southwest Second Street on Southwest B Avenue.

Planning staff said development criteria were met and recommended approving the new skate bowl, although a floodplain permit will be needed as a condition of approval. Jackie Rochefort, park planner and manager, praised the nonprofit organization Benton County Skateboarding Alliance as instrumental in moving the bowl project forward.

The proposed location is west of the skate park. It would be a maximum width of just over 54 feet, with 4 feet of deck on the west and 10 feet of deck on the east, according to city documents. Rochefort said the project funding primarily stems from a grant and a “significant” private donation.

Vaughn Balzer, skateboarding alliance president, said the park was designed for those with beginner and intermediate skills, and has no terrain for more advanced skaters. He also noted crowding on sunny days, with upward of 50 visitors at once, and said adding the bowl would help spread people out, making it safer to skate.

Following a presentation by Balzer and Jasmin Woodside, a skateboarding alliance board member and civil engineer, Woods asked for more discussion about public safety concerns in the park area, pointing out that improving the park is likely to draw in more young people. He questioned improving the park before safety issues are resolved.

“I wonder if we just need to tap the brakes and get a handle on this area of town,” Woods said.

Price later echoed Woods’ questions about addressing safety if more unaccompanied young people will frequent the park area. Price would have preferred to see a plan targeting the illegal activities in the park alongside the expansion request.

Meredith Petit, Parks and Recreation director, said she shared concerns about the area and other city parks inundated with illegal camping. The city stopped enforcing illegal camping ordinances in March 2020 because of the pandemic, not resuming enforcement until May 2021. However, illegal camping remains prevalent, particularly near city services.

Petit also said the city works closely with the Oregon Department of Transportation, which is responsible for the area under the overpass, including any homeless camp cleanup efforts.

“From a Parks and Recreation standpoint, ... and one theoretical approach is replace areas that have negative activity with positive use,” Petit said. “It does put more eyes and activity into an area.”

Rebutting comments from the commissioners, Balzer said future development plans will further improve family-friendliness and safety in the park. He also pointed out that the area had issues with illegal activity going back decades, even before the park was built.

Public testimony was largely in favor of the new bowl. Supporters, including several younger skaters, defended the positivity and diversity of skateboarding culture and distanced it from any criminal activity. They also highlighted the health value of skateboarding as well as the potential tourism benefit of a more advanced facility.

Some of the supporters mentioned having a history of positive experiences with the illegal campers.

After deliberations, Price moved to approve the new bowl.

However, Price said the project was “right on the edge of not meeting the criteria.” He said he was hesitant but hopeful the expansion would be followed by improved conditions for park users.

The commission voted unanimously for approval. The deadline to appeal the decision to the City Council is Jan. 18.

“I hope that the city — as the applicant — will make efforts to police this better,” Price said. “That when they get calls for drugs or violence or solicitation that they act quickly to protect our children.”

Woods said he was prepared to dig his heels in on the safety issues, but hearing the testimony, especially from the youth, changed his view. He recalled during his site visit that day he was touched by the sentiment of an announcement board message reading something like, “let’s vibe this into reality.”

“You changed my mind tonight,” Woods said. “So, congratulations. You vibed it.”

“I hope that the city – as the applicant – will make efforts to police this better." ~Carl Price, Corvallis Planning Commission

COVID-19 concerns driven by the omicron variant pushed Celebrate Corvallis back, but a new date has been set.

Willamette Park potholes here to stay, at least for now

Navigating the road into Willamette Park can be a bit like dodging through a minefield. One wrong move and — thunk — you’re hitting bone-jarri…

Hunter King, 15, drops in at the Eric Scott McKinley Skate Park in Corvallis on Friday, Dec. 7, 2021. The planning commission has approved a new sculpted skate facility, the Corvallis Bowl, as an expansion of the existing park.

The Corvallis Planning Commission approved the Corvallis Bowl as an expansion of the existing Eric Scott McKinley Skate Park.

Drug activity and crime are a concern by some residents when in comes to the Eric Scott McKinley Skate Park in Corvallis.

A conceptual drawing of the new Corvallis Bowl, which was approved by the planning commission Wednesday, Dec. 5, 2021.

A map showing the location of the new skate bowl.

A planning drawing of the new Corvallis Bowl, which will be added to the existing skate park.