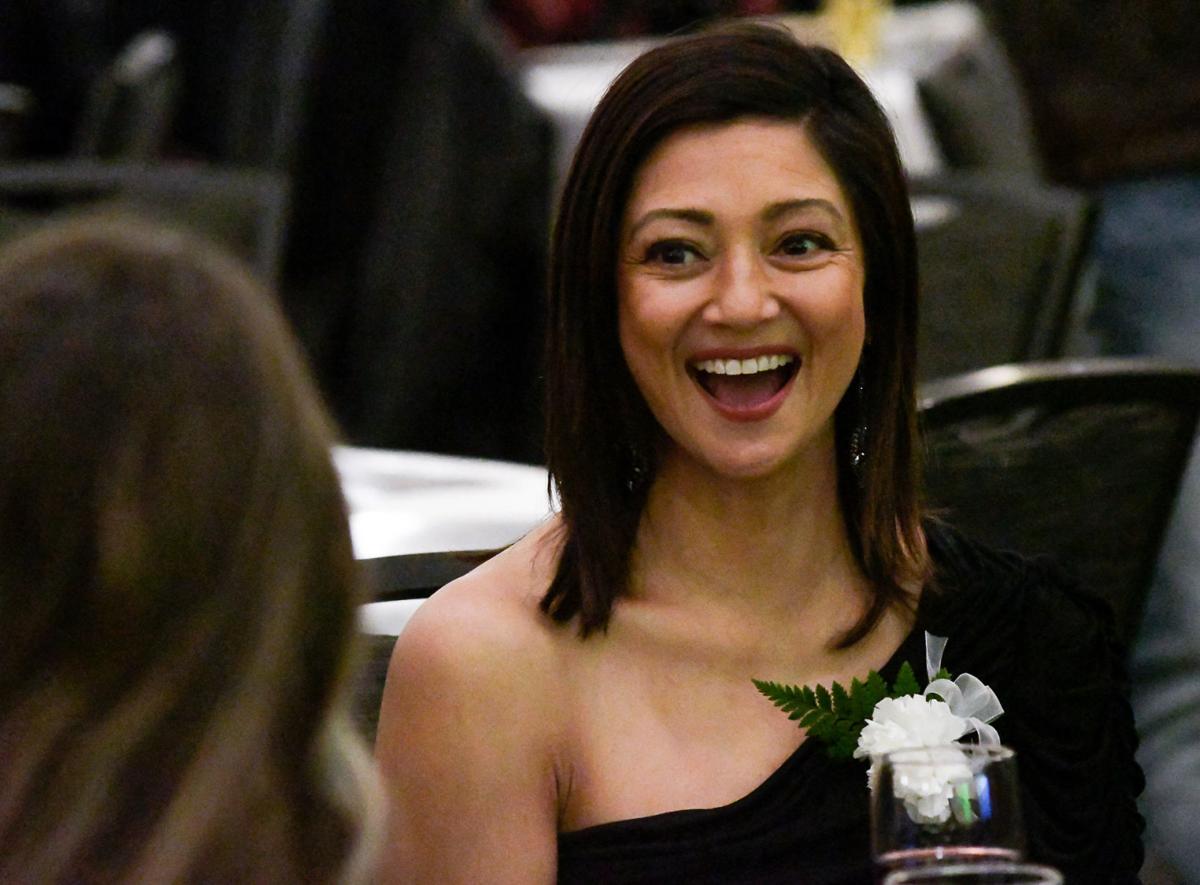 Tammy Morrison mingles with friends before the Celebrate Corvallis Awards presentation on Friday night. Morrison was named First Citizen for 2019. 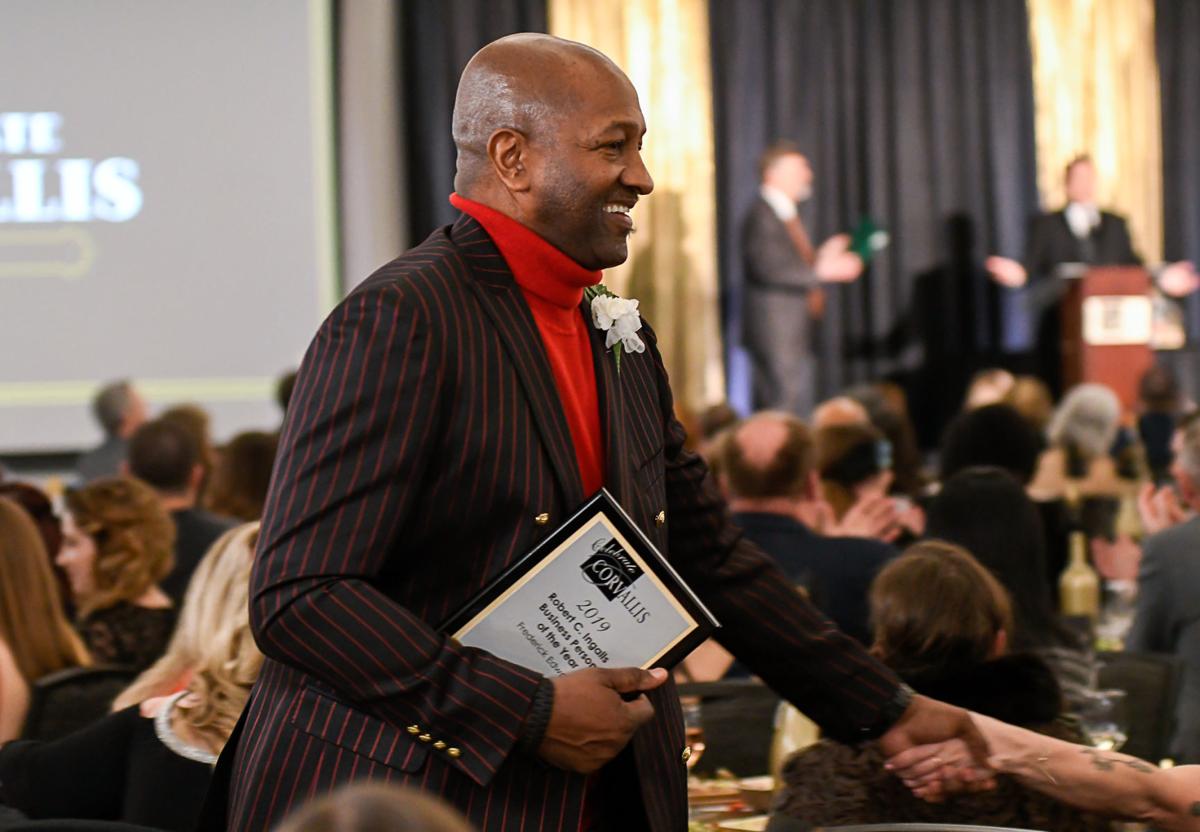 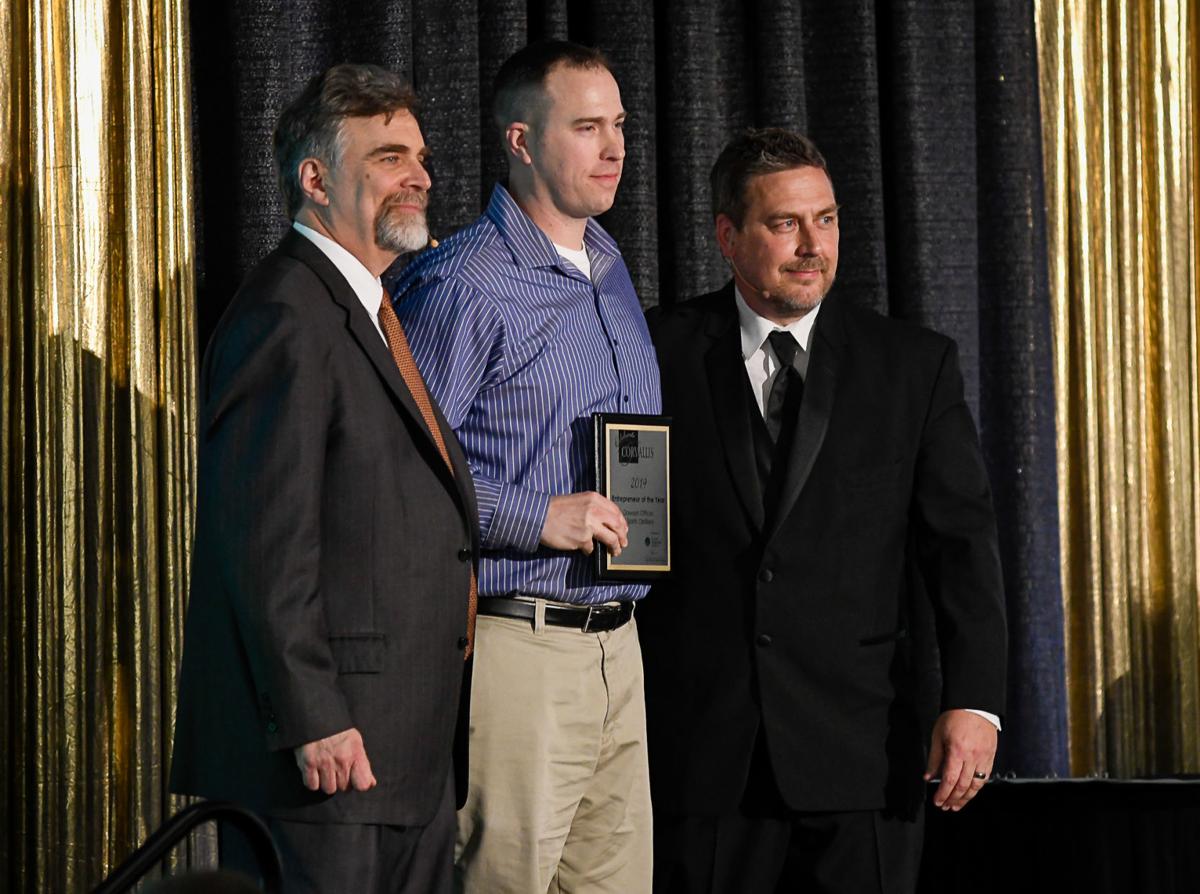 Dawson Officer is asked to smile as he poses for a photo with emcees Mike McInally, left, and Simon Date after receiving the Entrepreneur of the Year award Friday night at Celebrate Corvallis. 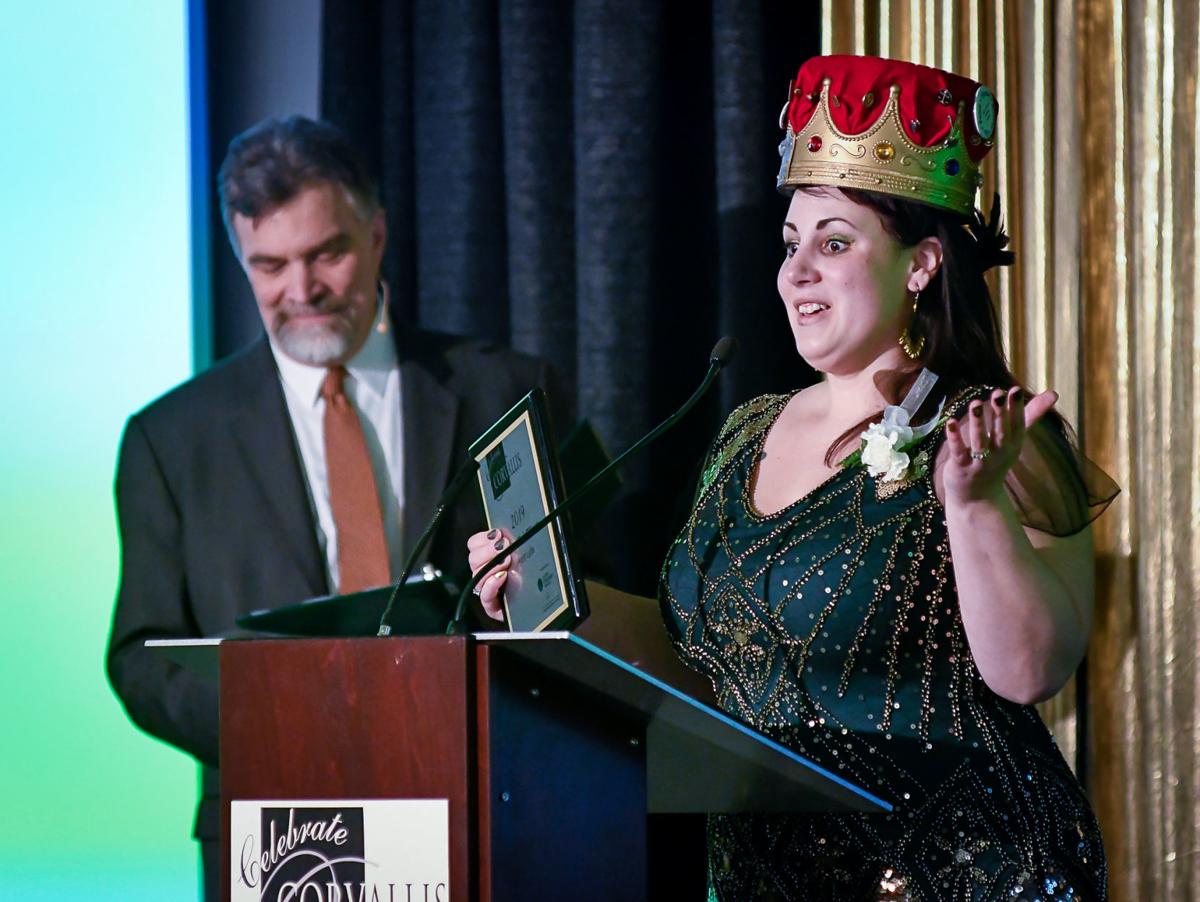 Town & Country Realty‘s Tammy Morrison was honored as Corvallis’ First Citizen, 4 Spirits Distillery owner Dawson Officer was named Entrepreneur of the Year and Fred Edwards of Knight Vision Security came away with the title of Robert C. Ingalls Business Person of the Year at the 70th annual celebration of business success and civic spirit presented by the Corvallis Chamber of Commerce.

Elizabeth Bell, a longtime member of The Arts Center board, was named Patron of the Arts.

This year’s theme was “Roaring into the ’20s,” and many of the women in the audience of 400 or so people added a touch of glamour to the event by dressing as 1920s flappers.

While leadership in business is the foundation of the Celebrate Corvallis Awards, a willingness to put community before self is a thread that runs through all of the honors, year after year.

Morrison, this year’s First Citizen winner, is the business development manager for Town & Country Realty. But she’s also a longtime board member with the Old Mill Center for Children and Families and is active in other community organizations as well.

Entrepreneur of the Year Officer, who founded his distillery in Adair Village in 2011, expanded the business considerably in 2017, opening a 6,000-square-foot production facility and tasting room in South Corvallis, and last fall he launched the Corvallis Spirit Festival, which showcases craft alcohol producers from around the state.

He also served in the Oregon Army National Guard. Officer named 4 Spirits as a tribute to four comrades who died while deployed to Iraq, and the business has given consistently to veterans’ causes since its beginnings.

Knight Vision is one of the most successful and recognizable private security firms in the mid-Willamette Valley, but Business Person of the Year Edwards is just as well known for his off-duty contributions in a wide variety of volunteer positions. He is a former president of the local NAACP chapter and the Downtown Corvallis Association Board of Directors, a former chair of the Corvallis Police Review Advisory Board and has served on the boards of the Linn-Benton Housing Authority and the Corvallis King Legacy Advisory Board.

In his acceptance speech, Edwards urged others in the audience to give of their time to young people.

“I’m blessed to be able to go into these facilities and help some of these juveniles that really want my attention,” he said. “If you can find the time to give some of them your attention, please do.”

There was plenty of applause for the award winners, but one of the most heartfelt ovations of the night went to Mike McInally, who co-hosted the event with Chamber of Commerce President Simon Date. McInally has emceed the event for a number of years, but this was his first time doing so since his job as editor of the Corvallis Gazette-Times and Albany Democrat-Herald was eliminated in November. The crowd showed its appreciation for McInally’s service to the community by standing and cheering when he came onstage and laughing at most of his unemployment jokes.

The mood turned somber during a video tribute to civic-minded community members who passed away in 2019. The list included Richard Kunkle, Sandra Jean Powell, David F. Smith, Kathleen Frances Heath, the Rev. John Dennis, Joseph Frank Malango and Dr. Ken Johnson. There was also a moment of silence for former Corvallis City Councilor Joel Hirsch, who died in a car wreck earlier this month at the age of 61.

Ray, who will step down as president of OSU at the end of June after 17 years in the position, said in accepting his special achievement award that “there is a kind of gravitas” in taking time to remember some of the community members who have gone before.

“I think the best way we honor them,” he said, “is to try to live up to the example they set for all of us.”

The Corvallis Chamber of Commerce has announced the nominees for awards at the next edition of Celebrate Corvallis, the city’s annual recognit…

A community volunteer, a nuclear energy pioneer and the leader of a local youth club were among the big winners at the 2018 Celebrate Corvalli…

An all-female lineup of award recipients was announced Friday night at Celebrate Corvallis, with an unlikely entrepreneur, a tech company exec…

Tammy Morrison mingles with friends before the Celebrate Corvallis Awards presentation on Friday night. Morrison was named First Citizen for 2019.

Dawson Officer is asked to smile as he poses for a photo with emcees Mike McInally, left, and Simon Date after receiving the Entrepreneur of the Year award Friday night at Celebrate Corvallis.