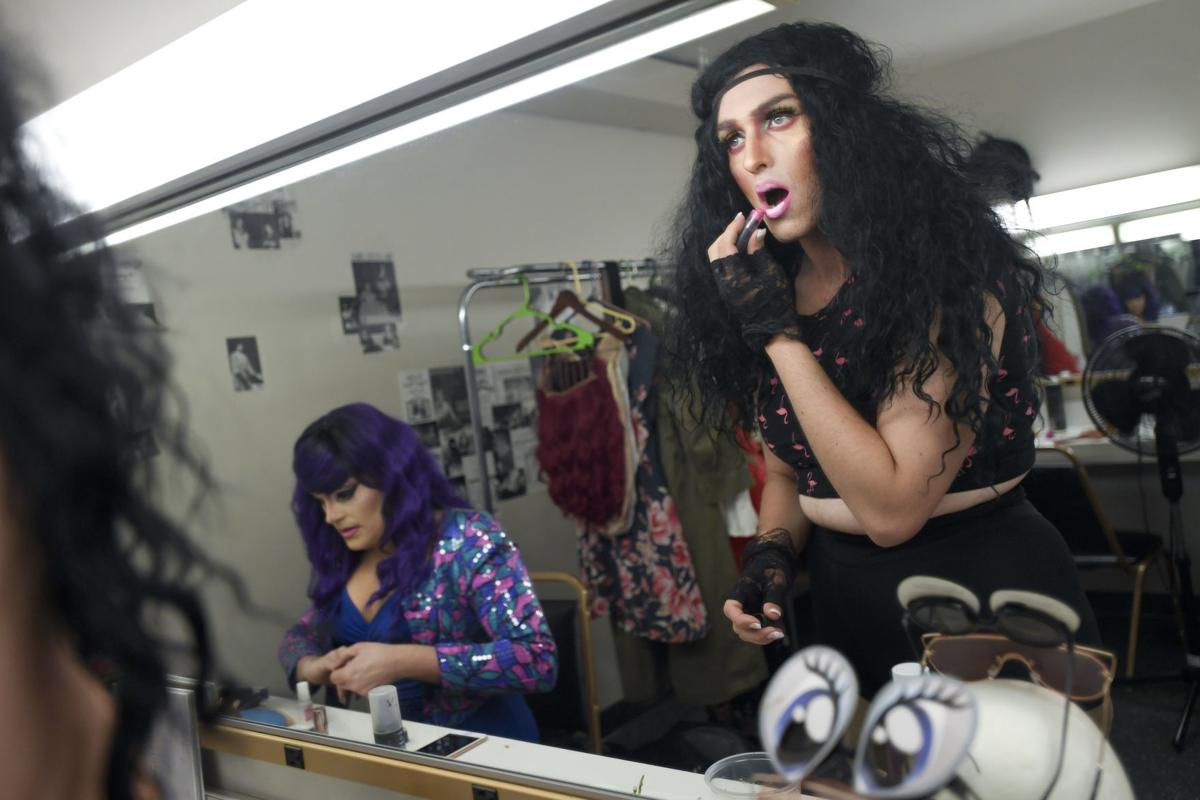 Dharma Mirza puts the finishing touches on her makeup prior to the Dam Right Drag Night show at the Majestic Theatre on June 22. 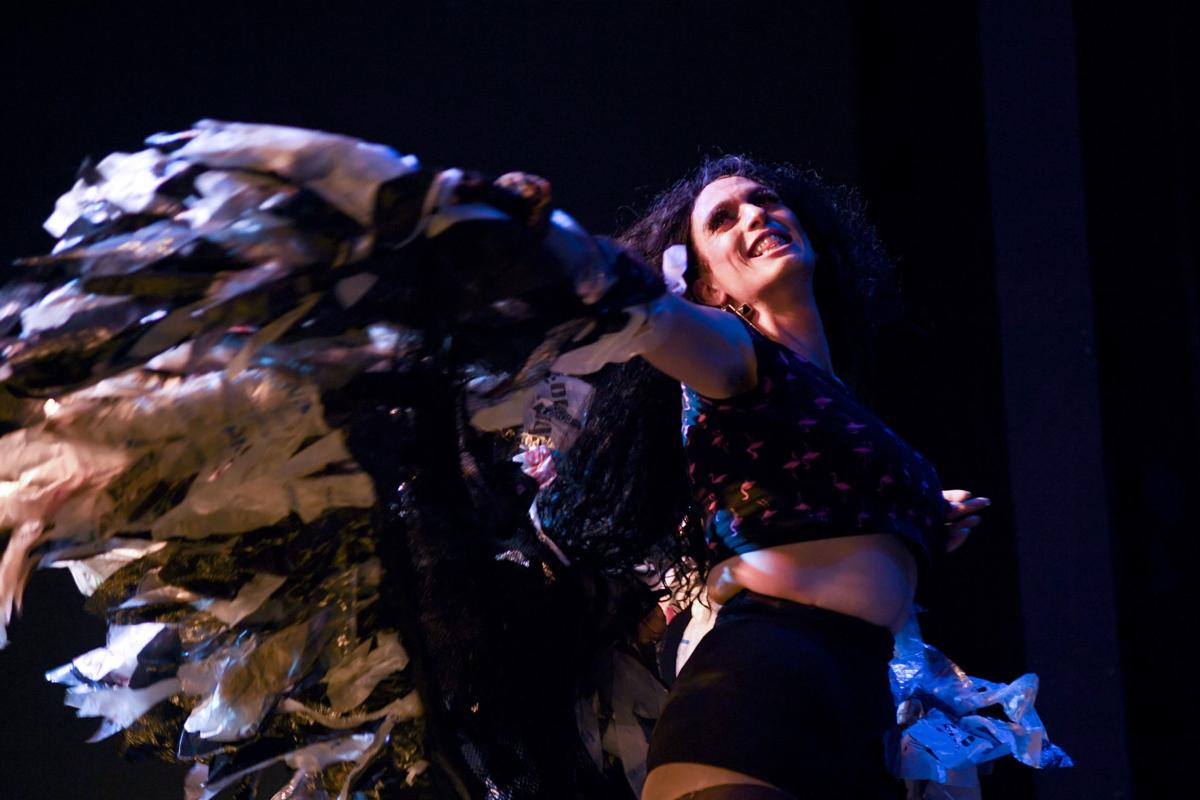 Wearing a cape made of sewn plastic bags, Dharma Mirza performs to "I Love Trash," a song from the TV show "Sesame Street," sung by Oscar the Grouch. 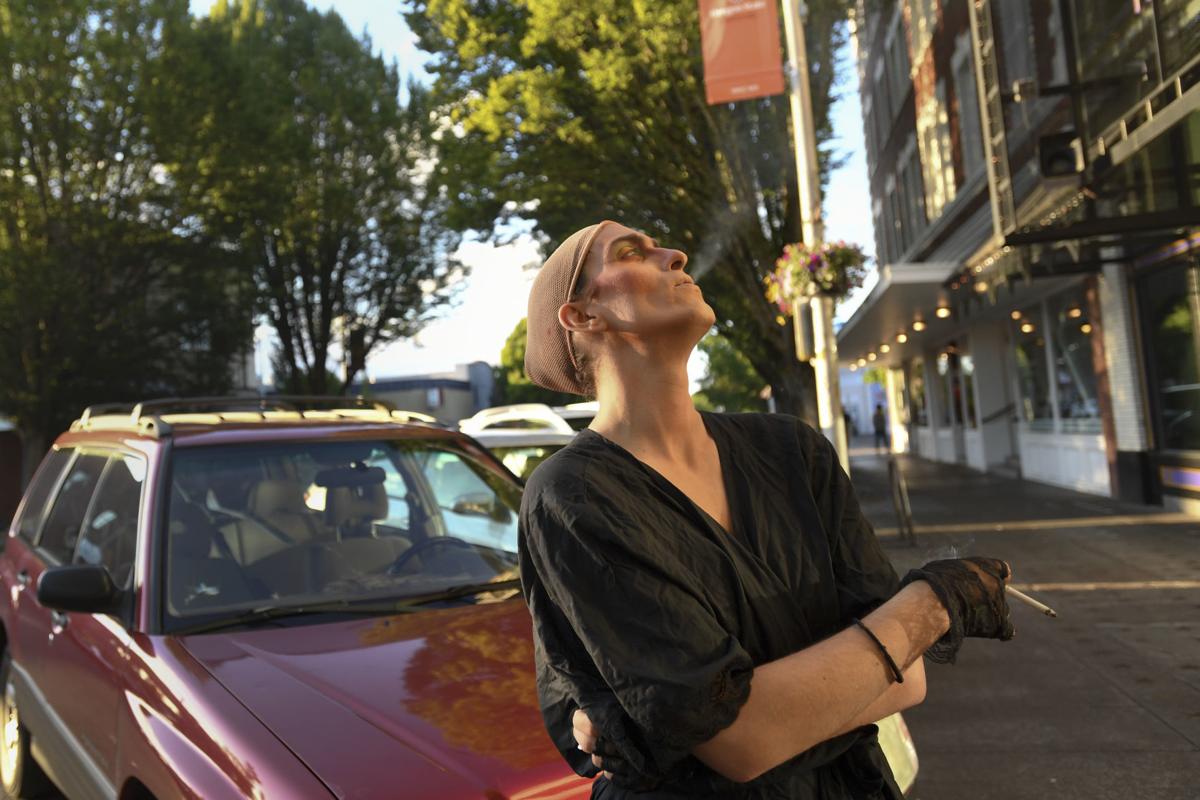 Dharma Mirza takes a break from getting ready for the drag show to smoke outside of the Majestic Theatre. 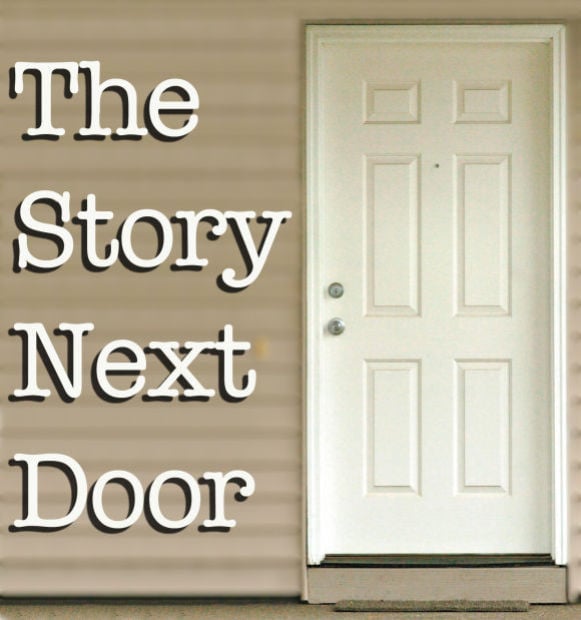 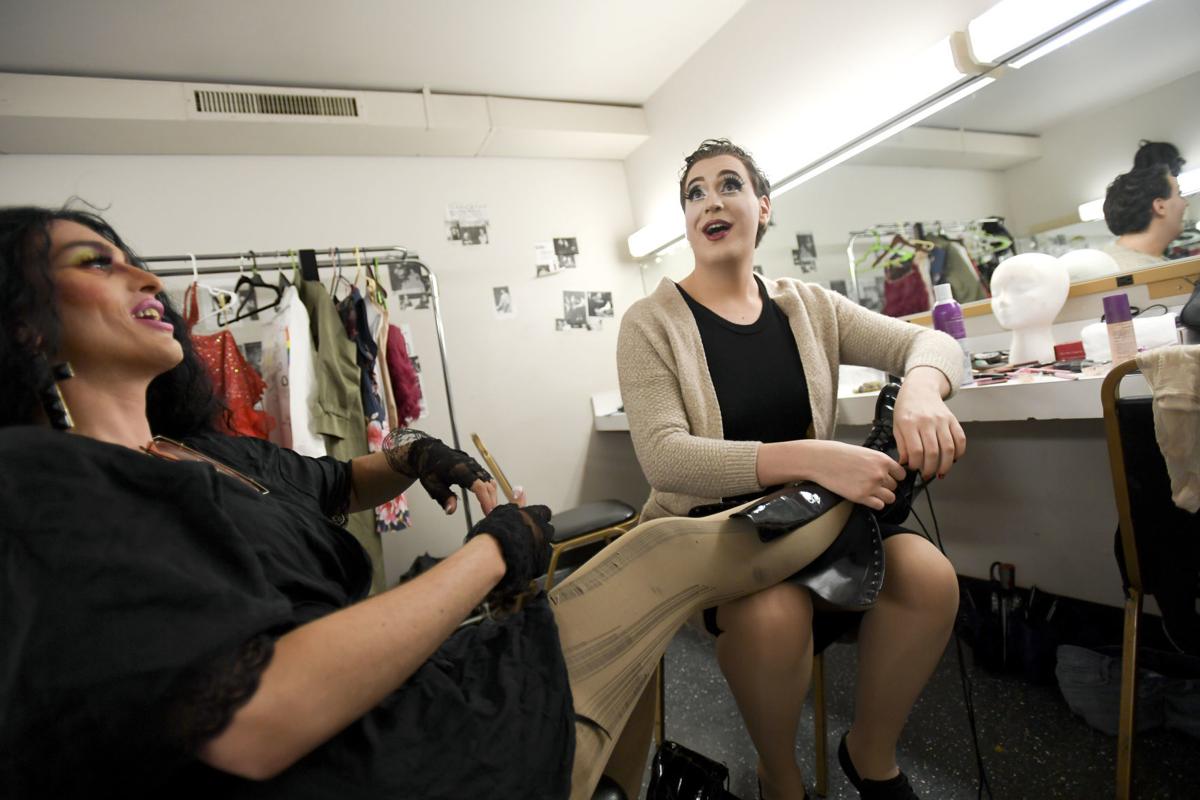 Dharma Mirza and fellow performer Cali Je joke around as Cali Je helps Mirza zip up her platform boots while getting ready for the Dam Right Drag Night. 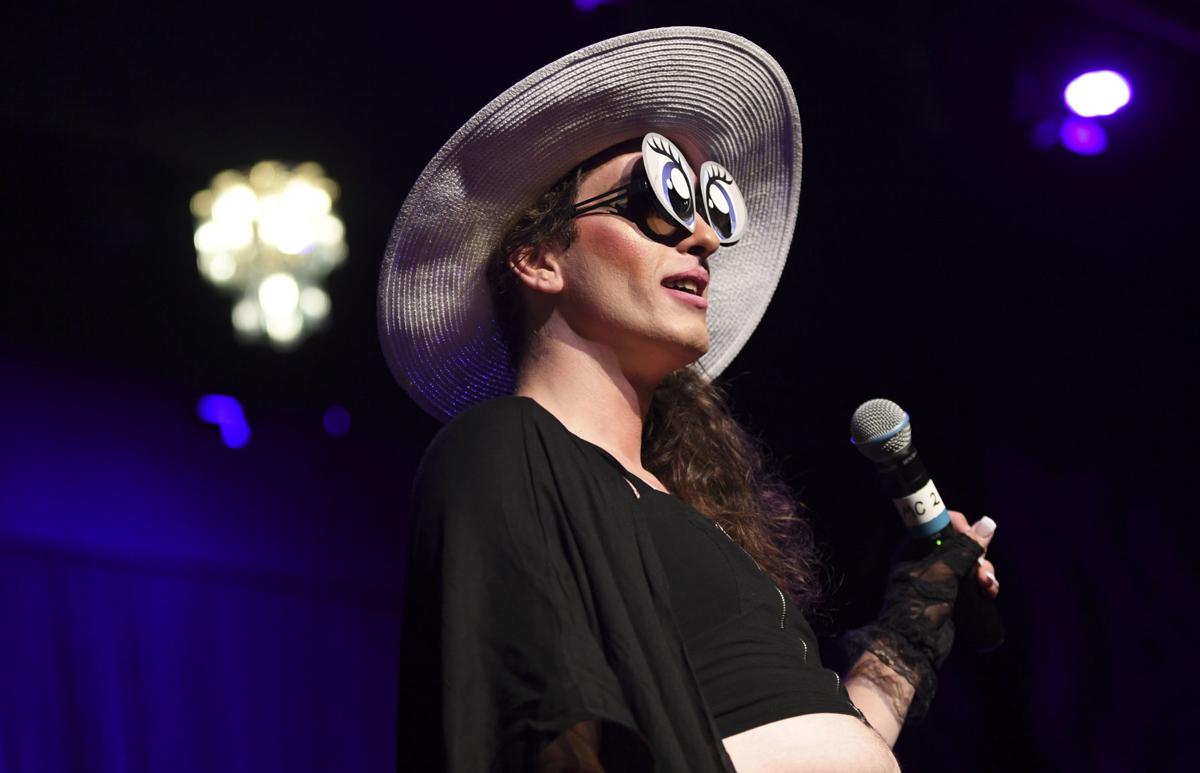 Dharma Mirza, here wearing a pair of "My Little Pony" glasses, is seen during a 2018 drag show performance at the Majestic Theatre in Corvallis. On Saturday night, Mirza's Haus of Dharma performers take the stage at a bigger venue, the Whiteside Theatre in Corvallis, for the drag musical theater review "Broadgay!"

When Mirza realized as a teenager that she was queer and transgender, that prejudice only worsened.

That’s why, in 2011, she moved to Corvallis, where her mother was living. Though Oregon provided its own struggles — Mirza was diagnosed with HIV last year after being sexually assaulted — she found more acceptance here. Mirza created Haus of Dharma, a drag entertainment company and agent for LGBTQ rights advocacy in the Mid-Willamette Valley.

“I never thought I would be where I’m at today,” Mirza said recently while sitting on the patio at Interzone coffee shop. “I didn’t think I would be alive at 25.”

Mirza said she feels supported now, but she hasn’t always felt that way. As a teenager, she struggled with drug and alcohol addiction. She entered a rehab program and while going through therapy she worked through her feelings about gender and sexuality. She remembers telling a nurse she didn’t feel comfortable being in an all-male facility and would feel better going to a women’s facility.

“They really gave me some of the language to understand,” she said. “I had maybe more of an understanding that I was queer already, but not transgender.”

When Mirza came out to her father, he took her to a mosque to be exorcised. They held her down, trying to remove the demons from her body. It traumatized her, and she knew she had to leave Utah.

“I was struggling really hard with substance abuse still because I was really unhappy with myself and I wanted human rights,” she said.

Knowing Oregon had passed the Oregon Equality Act in 2007, prohibiting discrimination based on sexual orientation and gender identity in employment, housing and other categories, Mirza felt comfortable moving here. She lived in Medford for some time before moving to Albany and attending Linn-Benton Community College.

Mirza was accepted by her mother, who bought her dresses and gave Mirza her first pair of high heels, a pair of brown leather boots she still has.

In 2014, she performed in the Oregon State University Spring Drag Show, her first-ever drag show, and sang “Valerie” by Amy Winehouse. But Mirza didn’t have a mentor to teach her makeup and costuming. Her wig fell off.

“I still had fun but it was a mess,” Mirza said. “I wanted to figure it out so I could create opportunity here, to be what I needed.”

She founded Haus of Dharma and began traveling throughout the Northwest to perform in drag shows. She also started organizing clothing drives to provide gender- reaffirming clothes to transgender people who cannot afford them or do not feel comfortable buying them in public. She also began helping connect people with transgender-competent health care providers, as well as training providers in transgender competency.

“There really is a gap in resources here,” Mirza said. “There’s not dedicated organizations that are dealing with trans adults, so we were really working to bridge some of those gaps.”

While attending LBCC, Mirza started an interfaith dialogue group to provide a safe space for queer and transgender people to think critically about spirituality and religion. She also secured inclusive signage for gender-neutral restrooms on the college campus.

Also in 2014, Mirza started hormone replacement therapy with the help of the Benton County Health Department.

In spring 2015, she performed at OSU again, singing “Breathe Me” by Sia, a song about self-harm. During the show she revealed a bloody transgender pride flag with the words “Help, I’m dying” on it. Afterward, people reached out to her; one person told her they decided to come out as transgender. Another said they chose not to kill themselves as a result of the performance.

"It was really important, because it let people know they weren’t alone in going through those feelings,” Mirza said. “That really changed my idea of what drag could be for myself, that I could change people’s lives by doing this art form and that I had already done so.”

In 2015, Mirza was sexually assaulted by her partner. Mirza stopped performing in shows and withdrew from her advocacy efforts. She quit her job and moved to Eugene, where she started using drugs again. She engaged in sex work to pay for her addiction.

“I kind of just stopped doing anything for the community, quit performing, quit taking my hormones,” she said. “I just hated myself.”

She said the trauma of the assault made her feel like she didn’t want to live her authentic life, because it could only lead to more traumatic events.

Toward the end of that year Mirza was sexually assaulted by someone who told her they had HIV. With the encouragement of friends, she moved back to Corvallis and entered a drug and alcohol treatment program.

“The drag community really saved me at that time,” she said.

In March 2017, two days before her 24th birthday, Mirza was diagnosed with HIV, devastating her. She went onstage for a drag performance the next day and told the crowd about her diagnosis.

“It made me want to keep going because I realized I wasn’t going to have to go through this alone,” she said. “I had the support of this whole community here.”

In May, Mirza became a board member of the Valley AIDS Information Network Inc., focusing on projects such as needle exchange services for intravenous drug users, HIV and STI testing and condom distribution at bars.

Despite all the work Mirza and her peers at Haus of Dharma have done, she sees more opportunities for activism in the community. She is working to establish a monthly private transgender health clinic.

She and her fellow queens now put on two or three drag performances a month. She said drag is about much more than cross-dressing.

"That’s not what the entertainment of drag is," she said. "It’s about people radically being themselves, taking aesthetics to the most high extremes. The highest high heels, the biggest hair."

"Drag just allows people to find out who they really are or to be something that they really don’t feel like they can be normally," she added. "It’s like a mask, this armor, you feel unstoppable."

Mirza said she wears drag some days but other days she doesn’t want to face the dirty looks and offensive words she receives from some people in the community.

“You’re constantly evaluating how you’re being seen and how you walk and how you’re talking,” she said. “I have to stealth a lot of the time just to get where I’m safe.”

“But I think it’s getting better and better as time goes on, and we get more exposure and visibility,” she added.

Dharma Mirza puts the finishing touches on her makeup prior to the Dam Right Drag Night show at the Majestic Theatre on June 22.

Wearing a cape made of sewn plastic bags, Dharma Mirza performs to "I Love Trash," a song from the TV show "Sesame Street," sung by Oscar the Grouch.

Dharma Mirza takes a break from getting ready for the drag show to smoke outside of the Majestic Theatre.

Dharma Mirza and fellow performer Cali Je joke around as Cali Je helps Mirza zip up her platform boots while getting ready for the Dam Right Drag Night.

Dharma Mirza, here wearing a pair of "My Little Pony" glasses, is seen during a 2018 drag show performance at the Majestic Theatre in Corvallis. On Saturday night, Mirza's Haus of Dharma performers take the stage at a bigger venue, the Whiteside Theatre in Corvallis, for the drag musical theater review "Broadgay!"