In honor of Independence Day, Gazette-Times is providing unlimited access to all of our content from June 28th-July 4th! Presented by Western Interlock 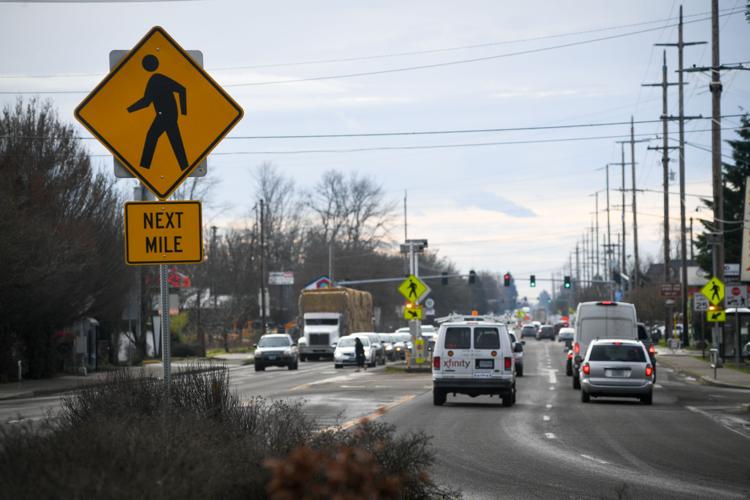 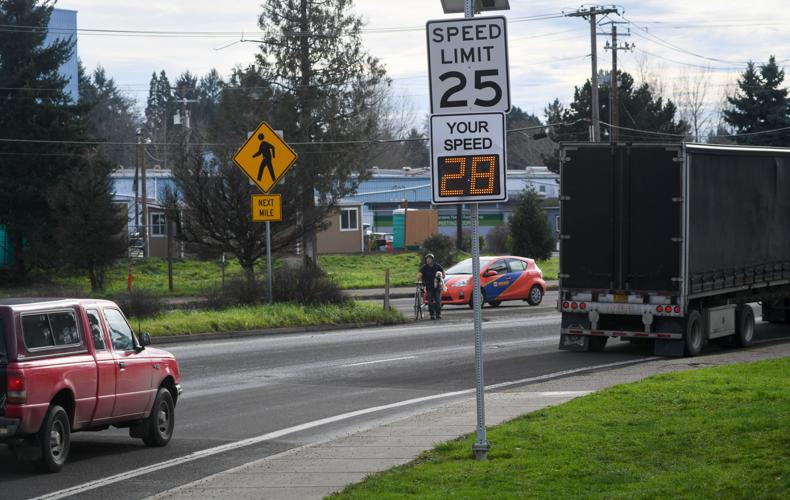 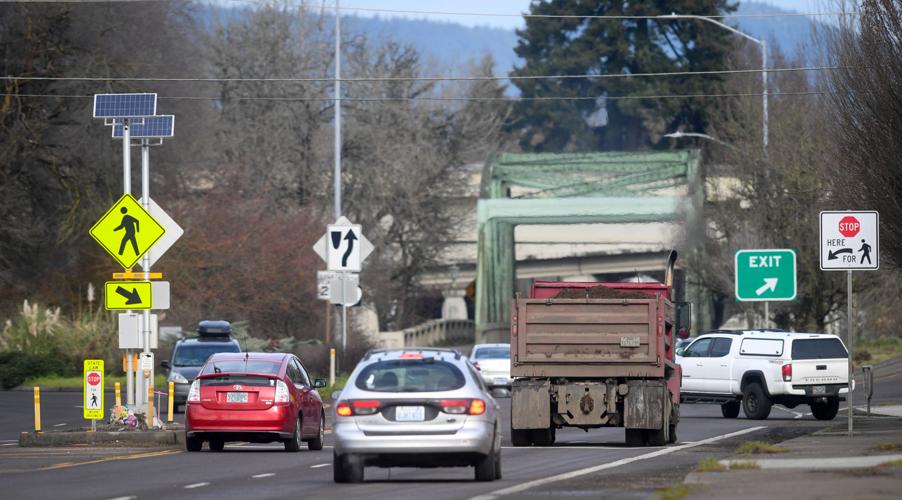 The father of a 32-year-old Corvallis man who died following a vehicle-versus-bicycle crash in 2019 has filed a wrongful death lawsuit against the city and others, seeking more than $2 million.

Jeffrey Gruver’s lawsuit, filed in Benton County Circuit Court in October on behalf of his son’s estate, alleges the negligence of four parties — Jose Torres, McKenzie Davis, the Oregon Department of Transportation and the city of Corvallis — all contributed to Jeremy Gruver’s death.

Jeffrey Gruver is asking for the defendants to collectively pay $2,570,737.77, which he says breaks down:

But in paperwork filed with the court, the defendants are casting blame at their co-defendants — and the dead. Davis and Torres blame the cyclist while the governmental agencies say both Gruver and the driver are at fault.

Heading into Corvallis, Jeremy Gruver was riding his bicycle at around 2:15 p.m. Oct. 21, 2019, on Highway 99W over the Marys River. He was crossing the street at a crosswalk at Southwest Twin Oaks Circle near the First Alternative Co-op when a motorist struck him.

According to the lawsuit, Gruver was thrown a “significant distance in the air” as a result of the collision, causing serious head injury.

The driver of a black 2001 Subaru Impreza was in the middle lane of the five-lane traffic corridor at the time of the collision. No other vehicles were involved.

The lawsuit alleges the vehicle was owned by Carolina Torres, a resident of Corvallis. She is not listed in the lawsuit as a defendant, and there are no reports indicating she was in the car at the time. In a response to the complaint, Jose Torres admits that he and Davis were the occupants of the vehicle involved in the crash.

Gruver was transported to Good Samaritan Medical Center in Corvallis. He succumbed to his injuries nine days later.

Corvallis police investigated the case, but no immediate arrests were made.

By November 2019, CPD Lt. Ryan Eaton told Mid-Valley Media the agency needed “more people who witnessed the incident to call in and tell us what transpired.”

An arrest is made

Then, two years following Gruver’s death, a suspect was arrested in connection with the crash.

Jose Torres, 22, of Albany was arraigned in Benton County Circuit Court on Nov. 8 on charges of second-degree manslaughter, vehicular assault of a bicyclist or pedestrian, fourth-degree assault, reckless driving and failure to perform the duties of a driver to a seriously injured person.

Court documents allege Torres caused the death of Jeremy Gruver as well as knowingly failed to provide a police officer his name and address.

It is unclear why it took two years to make an arrest in the case, but confusion regarding exactly who was behind the wheel may be to blame.

In November 2019, police identified McKenzie Davis as the driver, not Torres. It is unclear why officials named Davis, and questions posed to CPD and the Benton County District Attorney’s Office have gone unanswered.

The lawsuit, filed on Oct. 20, seemingly acknowledges the confusion but does not shed light on the matter. Both Torres and Davis are listed as defendants and the lawsuit alleges “the negligence and/or fault of defendant Torres and/or Davis, one of them, but not both” played a role in Gruver’s injuries and ultimate death.

The complaint was filed before Torres’ arrest on Nov. 8.

Few details have been released regarding the crash and what may have led to it.

Daniel Armstrong is representing Torres in his criminal case. Torres’ next court appearance in the matter is scheduled for Feb. 8.

According to the lawsuit, the actions of Torres and/or Davis played a “substantial factor” in causing the collision which led to Gruver’s injuries and death. Although the lawsuit doesn’t offer a narrative how it occurred, it describes these negligent actions:

Beyond negligence, the driver — whoever it was — allegedly broke one or more state laws, including:

Are the city and state to blame?

The other two defendants, the city of Corvallis and ODOT, are grouped together in the lawsuit, and are facing allegations of not maintaining the roadway to sufficient safety standards, which the estate says led to the crash.

The complaint alleges the crosswalk and surrounding area were “unreasonably dangerous for vehicular, pedestrian and bicyclist travel for the general public.” This is allegedly due in part to a limited number of north-south street connections in the city and few crossings of the Marys River, resulting in a funneling of travel onto Highway 99W.

Other alleged safety issues listed in the complaint include a lack of pedestrian hybrid beacons, inadequate signage alerting motorists of the crosswalk and no warning signals or signs for pedestrians or bicyclists to alert them of the dangers of using the crosswalk.

The lawsuit asserts ODOT and the city should have known the crosswalk was dangerous. Workers had restriped the lines near the crosswalk and replaced street lights, and ODOT statistics show the corridor to be a “high-crash” area, the lawsuit alleges.

Meanwhile, officials should have taken note of resident protests prompted by a number of accidents in the area, the lawsuit says, as well as local residents speaking out about the issue of pedestrian safety.

Gruver’s fatality is one of several collisions in the same block, and it’s the second to lead to a lawsuit filed this past year against the city and ODOT.

Mere months after Jeremy Gruver died, a motorist hit 11-year-old Rhianna Daniel on Jan. 8, 2020, in a crosswalk just south of the one Gruver was hit in. Daniel was crossing the highway in a marked and traffic-controlled crosswalk when Peter Eschwey hit her while driving a 2015 Nissan Leaf. Eschwey was not charged with a crime.

Daniel died from her injuries.

Roy Daniel, Rhianna’s father, filed a $9.1 million lawsuit against the city of Corvallis and ODOT, alleging the agencies’ negligence led to his daughter’s injuries and subsequent death.

Rhianna’s was the third fatality in less than three years near the Co-op. In June 2018, bicyclist Eric Austin died after being hit by a car in the same area using the crosswalk. The Benton County District Attorney’s Office decided not to file charges against Jeffrey Scoville, the driver who reportedly hit Austin.

Following the multiple crashes, community members called for safety improvements at the South Corvallis corridor. In March 2020, the public gathered for a forum to discuss street safety during which attendees wondered why drivers weren’t prosecuted more aggressively in connection to fatal crashes involving bicyclists and pedestrians.

All defendants have filed responses, or answers in legal-speak, to the initial complaint. Davis, who is represented by Damascus-based attorney Timothy Heinson, denies being the driver of the car that hit Gruver and instead alleges Torres was the operator. But she doesn’t fault him.

She puts the blame on Gruver himself, alleging that he did not maintain a proper lookout, failed to yield to Torres’ right of way, failed to maintain control of his bicycle, performed an unsafe turn, operated his bicycle at an unreasonable speed and more.

Heinson said he could not comment on anything further than what is in paperwork filed with the court.

In an answer to the complaint, Torres’ attorney, Salem-based Rod Jones, writes that Torres admits an accident between Gruver and a vehicle occupied by him and Davis occurred. However, he omits completely whether his client was driving.

The answer faults Gruver for the collision. Jones gives reasons similar to the ones laid out in Davis’ response. Jones was out of the office and unavailable for comment at the time of publication.

ODOT has filed an answer to the complaint through attorney Steven Lippold. The agency denies all allegations of negligence leading to the crash and Gruver’s death. Instead, the answer blames Gruver as well as the driver of the car that hit him.

Kristina Edmunson, communications director for the Oregon Attorney General, said the state could not comment on pending litigation.

Through Springfield-based attorney Robert Franz Jr., the city of Corvallis filed an answer also denying any allegations of negligence. Franz could not be reached for comment.

The city alleges Gruver was negligent in the ways mentioned in Davis’ answer, adding that Gruver allegedly failed to wear or use head protection while riding his bicycle, rode his bicycle the wrong way and did not show his intent to turn and cross the highway using an appropriate hand signal.

Similarly to ODOT, the city faults the driver for the crash. However, the city’s answer explicitly names Torres as the culpable party. The answer was filed in December, after Torres was arrested.

Like ODOT, the city also claims it is immune from liability in regards to the case.

In a letter addressed to all counsel and parties, Benton County Circuit Court Judge Matthew Donohue was assigned to the case.

The next hearing in the matter is set for May 3.

Editor's Note: An earlier version of this article incorrectly reported that Rhianna Daniel and Jeremy Gruver were struck by motorists in the same crosswalk. It has been updated to include the correct location of both collisions.

Albany man charged with manslaughter for death of cyclist in Corvallis

Two years after the collision, an Albany man has been arraigned on manslaughter and assault charges for the death of a cyclist as he traveled …

The father of an 11-year-old girl who died after being hit by a car while crossing a Corvallis street has filed a $9.1 million lawsuit against…

EDITOR'S NOTE: An earlier version of this article misidentified the alleged driver.

Nicholas Kristof's campaign for governor has raised $2.54 million as of Friday, even as the Oregon Supreme Court considers whether he can run at all.

Farmer says Amtrak crash could have been averted

Farmer says Amtrak crash could have been averted