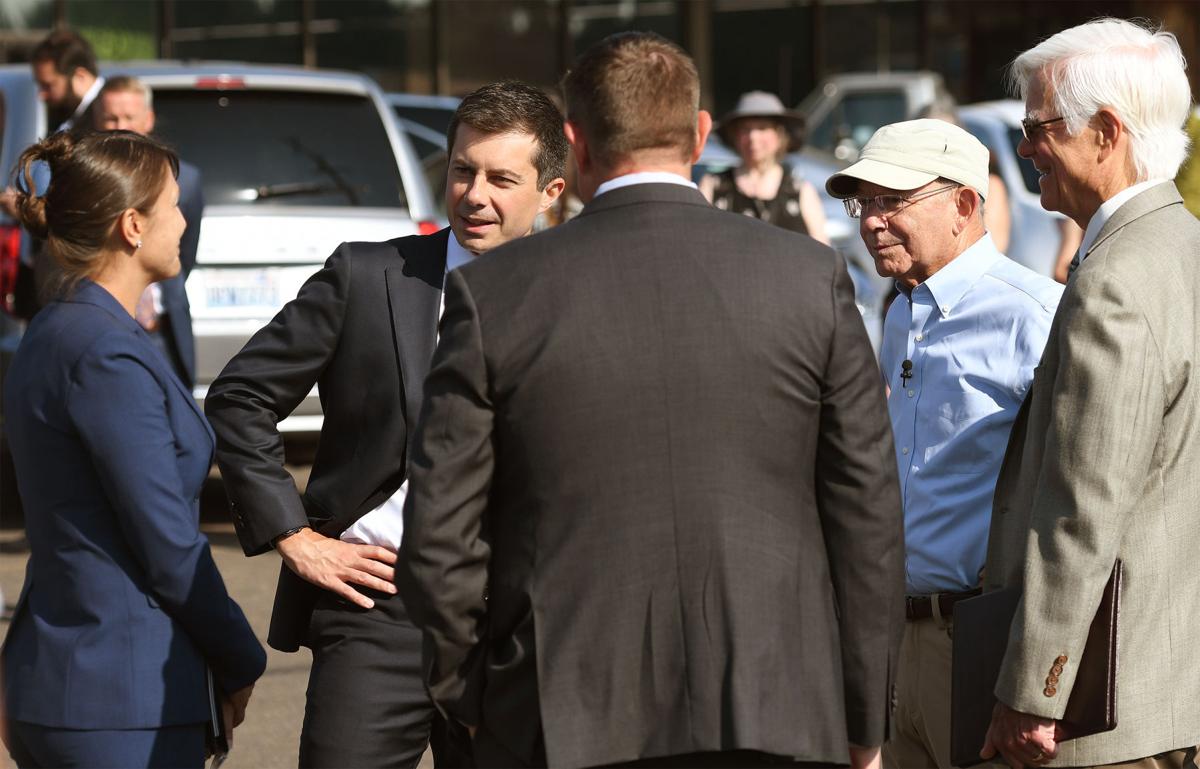 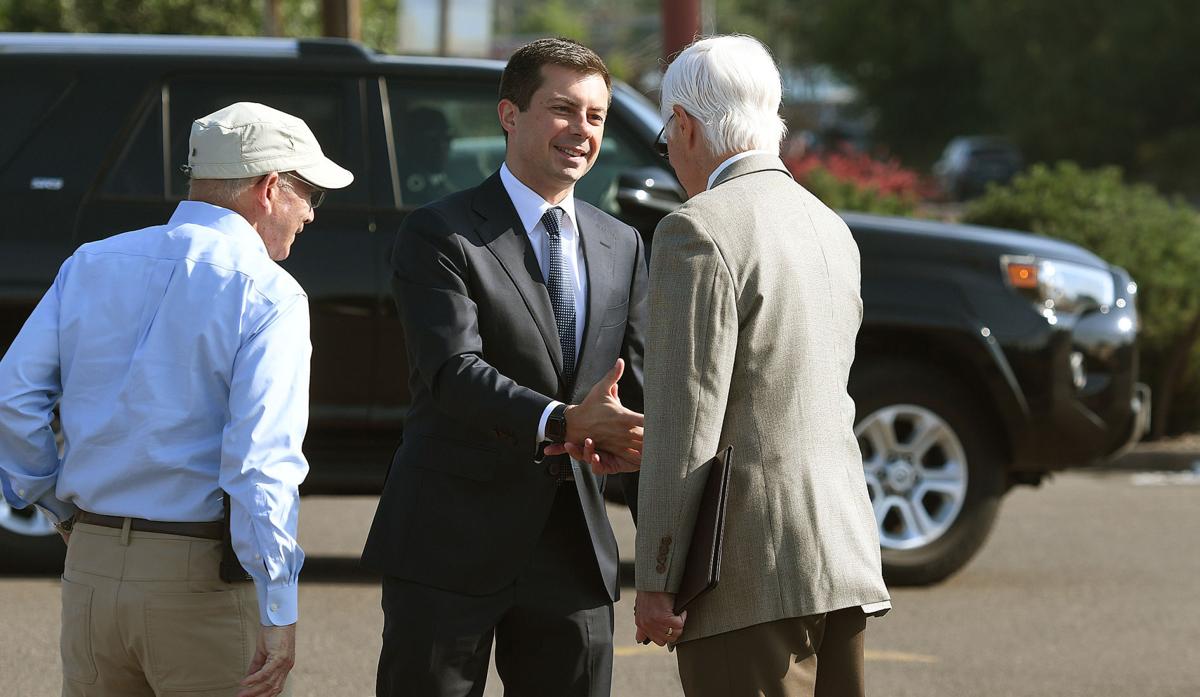 Big political names met in a strip mall parking lot along one of the most dangerous stretches of highway in Oregon on Wednesday. The purpose of the session was to talk about a new traffic safety initiative that’s part of the infrastructure package currently working its way through the Senate, as well as a new bill authored by Rep. Peter DeFazio.

The group met in the parking lot of Southgate Plaza along Third Street in Corvallis, which is really a stretch of Highway 99W and is the main corridor drivers use to get to the south side of town and into the southern Willamette Valley.

Speaking with Secretary Buttigieg about the work that’s already been done to improve the safety there, ODOT officials said 99W is still “one of the top five in safety issues” in Oregon. The mayor noted how Corvallis is a very active community, with a robust biking and jogging population, making road safety a major issue for locals, especially on roads like this one “where there is a continuing pressure to move along here.”

A recent ODOT study of that stretch found that there have been six fatalities and 11 serious injury crashes there since 2014. The study also found that 10% of all crashes there involved pedestrians or cyclists.

A multiuse path, completed last fall to direct pedestrians and cyclists away from the crowded road and sidewalks, was named after cyclist Eric Austin, who who was struck and killed in 2018 just a stone’s throw north of where the politicians gathered on Wednesday.

These tragedies were fresh on the minds of the policymakers and they said the incidents highlight why safety improvements are necessary throughout the country, especially in communities such as Corvallis that have developed around busy highways.

“One of the main important things we have to do, really as a country, is recognize that that’s not inevitable. It’s not a natural, built-in cost of transportation,” Buttigieg said. “It’s actually something we could act on and work towards zero traffic fatalities. And you can see that vision in the work that the mayor is describing, work that’s been done just feet from where we’re standing.”

Some of that work includes pedestrian crosswalks with center islands in the road, so a pedestrian or cyclist only has to watch for oncoming traffic on one side at a time. There have also been flashing yellow lights installed to alert traffic to crossing pedestrians. Radar speed signs track oncoming vehicles and help enforce the 25 mph speed limit along that stretch of the four-lane highway.

Officials say the push for making communities more walkable is also about reconnecting areas of town that have been divided by highways and interstates. In its American Jobs Plan framework, the Biden administration points to equity issues related to transportation, too. As interstates were constructed in America’s cities, they disproportionately impacted poorer neighborhoods and communities of color. Massive freeways and arterial roads have cut off communities all over America, just as Highway 99W has divided South Corvallis.

Buttigieg called Corvallis and ODOT’s approach to safety “encouraging.” Both he and DeFazio highlighted the Biden administration’s efforts to pass a bipartisan infrastructure bill, which lays out a framework for billions in spending on safety improvements for roads all over the country. DeFazio has authored a separate bill, the INVEST In America Act, which passed the House  July 1. Both pieces of legislation still face a political battle in the evenly divided Senate in order to get President Biden’s signature.

“This is a 21st Century approach to transportation,” DeFazio said of his bill and of the broader push to update America’s infrastructure. “We’ve been living on the Eisenhower plan for the last 60 years. We built 35,000 lane miles in our 100 largest cities and we’re six times as congested in the last 25 years. We need new solutions.”

They got to see some of the modernization first-hand later in the day. Following their stint in Corvallis, DeFazio and Buttigieg traveled down to the Eugene/Springfield area to see the new all-electric fleet of buses as part of the Lane Transit District’s new initiative, a project DeFazio helped secure funding for.

Buttigieg, as others in the Biden Administration have done, called the infrastructure plan a “once-in-a-generation investment” in improving transportation systems and bolstering safety corridors.

Aside from the infrastructure component, the meet and greet in Corvallis was a momentous occasion for the mid-valley community in that it marked the first time in decades that a federal Cabinet secretary visited.

DeFazio said the last time he could recall a member of a presidential administration coming to Corvallis was when former Secretary of the Interior under Reagan, James Watt, visited more than 30 years ago.

“He was a right-wing ideologue … who came to stump for the Republican when I first ran for office,” DeFazio said. DeFazio was first elected to represent Oregon’s 4th District in 1986.

Buttigieg said he relies on DeFazio’s experience in infrastructure issues, since the elder statesman has dealt with transportation legislation throughout his time in Congress. Buttigieg called DeFazio, “one of America’s visionary transportation leaders.”

He also offered comparisons between Corvallis and South Bend, Indiana, where he was mayor before running for president in 2020.

“This is a community that, in some ways, reminds me of where I come from in terms of the scale and some of the challenges,” Buttigieg said. “Being a kind of mid-sized and lower-density city provides opportunities to break new ground.”

The visit was a continuation of a tour around America that the two Washington policymakers are undertaking to see first-hand the struggles of main streets all over the country. Buttigieg said he was excited to finally see Corvallis in person.

“I’m real excited to be on the ground in communities that chair DeFazio has described to me while we’ve been in conversations in Washington or over the phone,” he said. “Now I have a chance to see them for myself.”

There are still more road improvement projects to come. ODOT officials described how further improvements to lighting are expected along that stretch, as well as general improvements to other arterial roads, which will divert some of the traffic from Third Street.

“We’re pushing for more connectivity so people don’t have to go on Third Street to get to South Corvallis,” said Mayor Biff Traber.

He also described how much help the proposed increase in federal funding would be. DeFazio’s bill includes a 43% increase to state highways and bridges.

“There’s a lot of good work going on,” Traber said. “We appreciate the support of the federal government.”

ODOT also is working on a two-year safety study for the South Corvallis corridor.

Please see this story at the website for a photo gallery and video.

Watch Now: Why are there more floods?

Gross! An up-close look at the secret world of banana slugs

Gross! An up-close look at the secret world of banana slugs

Initial site work has finally begun on the Mid-Valley Intermodal Center in Millersburg, after a yearslong process of planning and competing ag…

The federal Bureau of Land Management distributed more than $1.4 million between Linn and Benton counties as part of the Secure Rural Schools …

Roundabouts are coming to South Corvallis