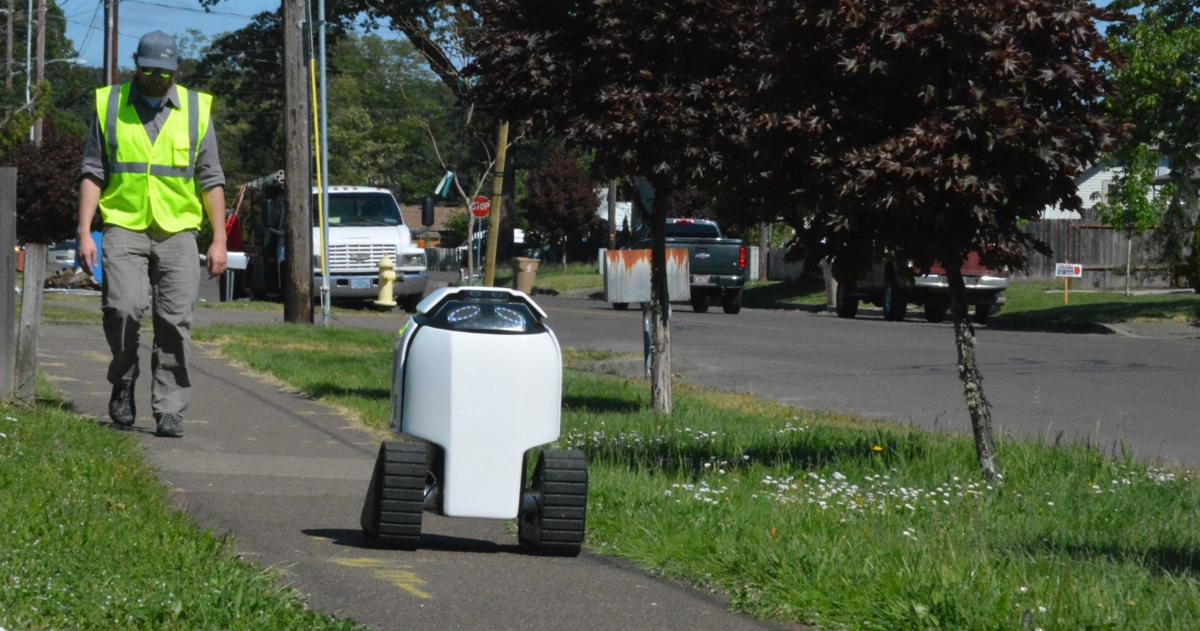 Colby Schwindt, of Nova Dynamics, trails Dax down a sidewalk on College Street in Philomath recently during a testing session. 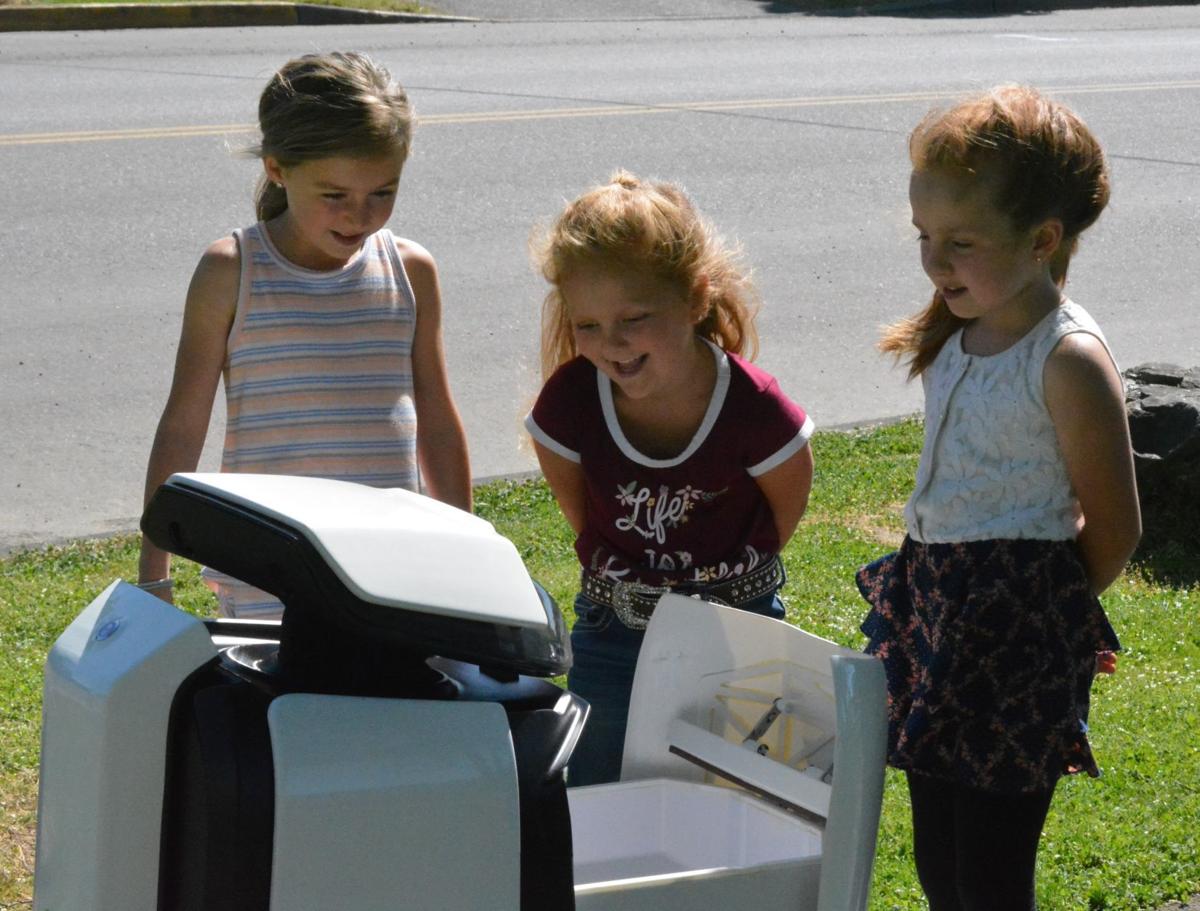 Dax opens a drawer to the delight of Rylee Sleeman, 8, from left, Camryn Sleeman, 4, and Taylor Sleeman, 8. 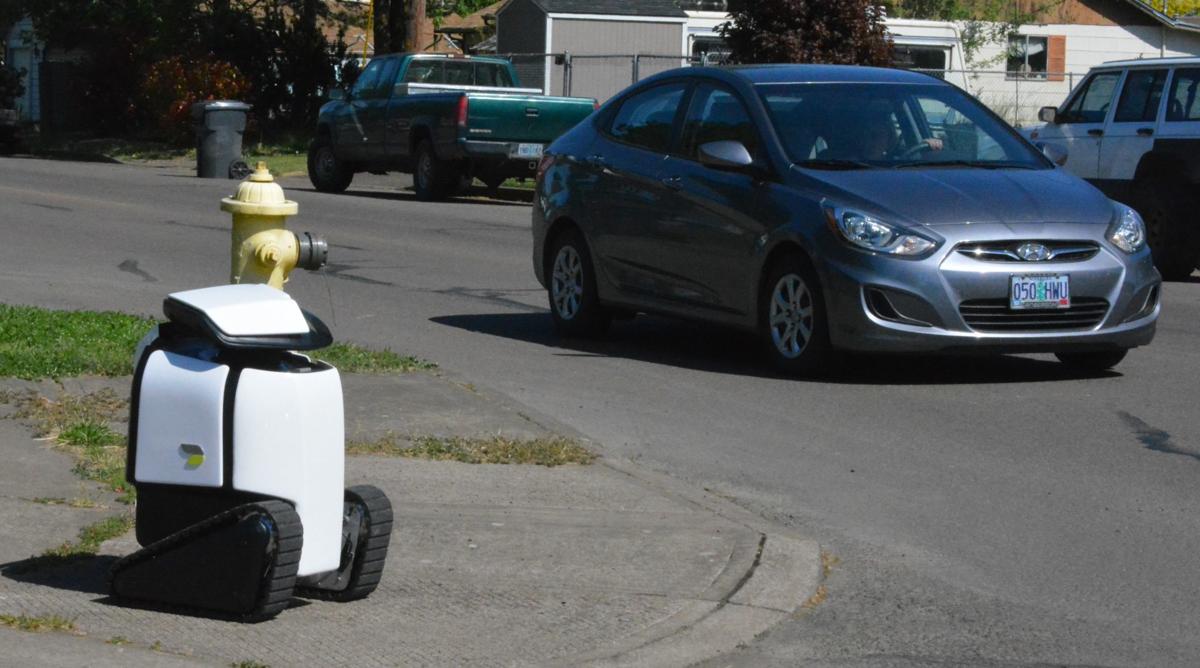 Dax looks to his left at a vehicle while preparing to cross the street during testing.

Making his way up and down College Street in Philomath on a quiet Thursday afternoon, Dax was getting in some needed time on the road in preparation for a career in the delivery service industry.

The Nova Dynamics robot maneuvered around a few vehicles jutting out onto sidewalks, handled some fairly challenging bumps that were in his path and even looked both ways before crossing the street.

But it wasn't too long before the his testing area livened up a little with motorists slowing down for a closer look and neighborhood school children wanting to touch him.

"At this point, we've completed over 70 tests and we've driven over 50 kilometers (31-plus miles)," Nova Dynamics founder and engineer Joseph Sullivan said. "It's been incredibly enabling for the team to be able to write software, fix problems and then go out and make sure it actually works in the real world."

"We've met with some local business owners and so far, the response has been overwhelmingly positive," Sullivan said. "We're not coming in to compete with local businesses, we're coming in to enable them. We see this as a possible way for small shop owners to compete against Amazon. The way I look at it, I would rather order something from a local store and get it in 20 minutes than order it from Amazon and get it the next day."

Dax has also made appearances at a few other venues, including Oregon State University, a business leadership conference and with local high school robotics students.

Talking to the Philomath City Council during its May 14 meeting, Sullivan said Nova Dynamics learns more and more with every test.

"We've done a lot of design testing and a lot of software testing," Sullivan said. “We’ve built in better camera software, we’ve reconfigured a couple of things. This is not our first prototype ... we’ve got multiple robots and we’re working on building a bunch more."

Nova Dynamics and the city have a memorandum of understanding in place that allows the robot to be tested on local sidewalks and streets.

Among the design changes have been a new "neck" so he can look around along with a better overall control system.

"As what happens when you test, we found a lot of things that weren’t working right," Sullivan said. "And so we had to go back to the drawing board, re-engineer a bunch of things that slowed down our testing pace and now we’re coming back online with the new eyes, the new neck and a bunch of stuff we learned and we're anticipating picking that pace back up."

The public's reaction to the robot has been an important component to the company's testing.

"More than anything, we've been able to validate the assumption that people want to see a robot," Sullivan said. "That was really the biggest risk with all of this — that people wanted robots in 2018."

As such, there's a reason why Dax has a certain look.

"I maintain that the limiting factors between us and practical robots is not the technology, it's people. It's whether we want this," Sullivan said. "So we designed Dax first and foremost to be cute, to be friendly, to be unobtrusive."

Sullivan said the testing revealed that Dax needed to "project what he was thinking."

"When Dax comes to a street corner, he kinda slows, he looks left, he looks right, and the drivers know to slow down because they can see exactly what he's thinking," Sullivan said. "You can get inside his head a little bit. And that was probably the biggest risk we took and that is putting a lot of money into making Dax personable and so far, it's paid off really well."

Mobility and traveling from point to point is obviously also a major part of the testing.

"We've had a couple of times where he's missed like an uneven spot in the sidewalk and kinda stumbled over that," Sullivan said. "Over at our property, I ran him into a tree once."

As for issues with traffic, Sullivan said there haven't been any problems.

"The only event I can think of is he died in a crosswalk at one point and we had to wheel him out," Sullivan said. "It turned out it was a software problem."

Nova Dynamics hasn't seen any vandalism or horseplay during any of the tests.

"He's been chaperoned for those tests, so it's not like a true indicator," he said. "What we've found is the vast majority of people really, really like him and want to come up and touch him."

Of course, like everything in life, not everybody will approve.

"We're not really worried about it because we always know where Dax is," Sullivan said. "It's not like he can really get lost. And at the end of the day, he's much more cost efficient to replace than a car or really most of the things we would use to carry groceries around. I'm sure there's going to be vandalism ... it's a new thing and so new opportunities for crime."

Sullivan said testing is moving forward to eventually create interaction with residents. The company hopes to build more robots over the summer and then get into a multi-phase doorstep delivery program.

"Initially we would only allow a small group of beta testers. As we refine the process and build more bots, we anticipate opening it to all Philomath residents," Sullivan said. "The timeline is hard to predict but I'm aiming for the end of the year."

Sullivan said he couldn't discuss how many robots Nova Dynamics has at the moment, but did say "we are in the process of making an initial 30 to serve Philomath."

So, how would the customer order something to be delivered?

"The vision is that if you pull out your phone, you choose which store you want to shop at, add some stuff to the shopping cart and check out," Sullivan said. "There's a half-dozen of these in the back room and it comes out, gets loaded up and then you see it driving to your location. Once it arrives on your doorstep, you can hit a button to open the drawer because it knows which phone ordered the food, so it can unlock with your phone."

Nova Dynamics welcomes feedback from the public through email at philomath@daxbot.com.

Joel Hirsch, who served four terms as an outspoken, colorful member of the Corvallis City Council. has died at the age of 61.

Colby Schwindt, of Nova Dynamics, trails Dax down a sidewalk on College Street in Philomath recently during a testing session.

Dax opens a drawer to the delight of Rylee Sleeman, 8, from left, Camryn Sleeman, 4, and Taylor Sleeman, 8.

Dax looks to his left at a vehicle while preparing to cross the street during testing.